edges the street-facing front and south side yards, stepping down towards the back of the parcel.

Previous survey and research identified this as the David T. Smith House; city directories show that

Smith and his wife Susan lived on Swift Avenue in the very early 1930s before moving here. Smith

Infectious Diseases there in 1930. Claudia Brown identified this house as one of the ten George Watts

Carr-designed spec houses during her 1980-1982 survey of Durham. 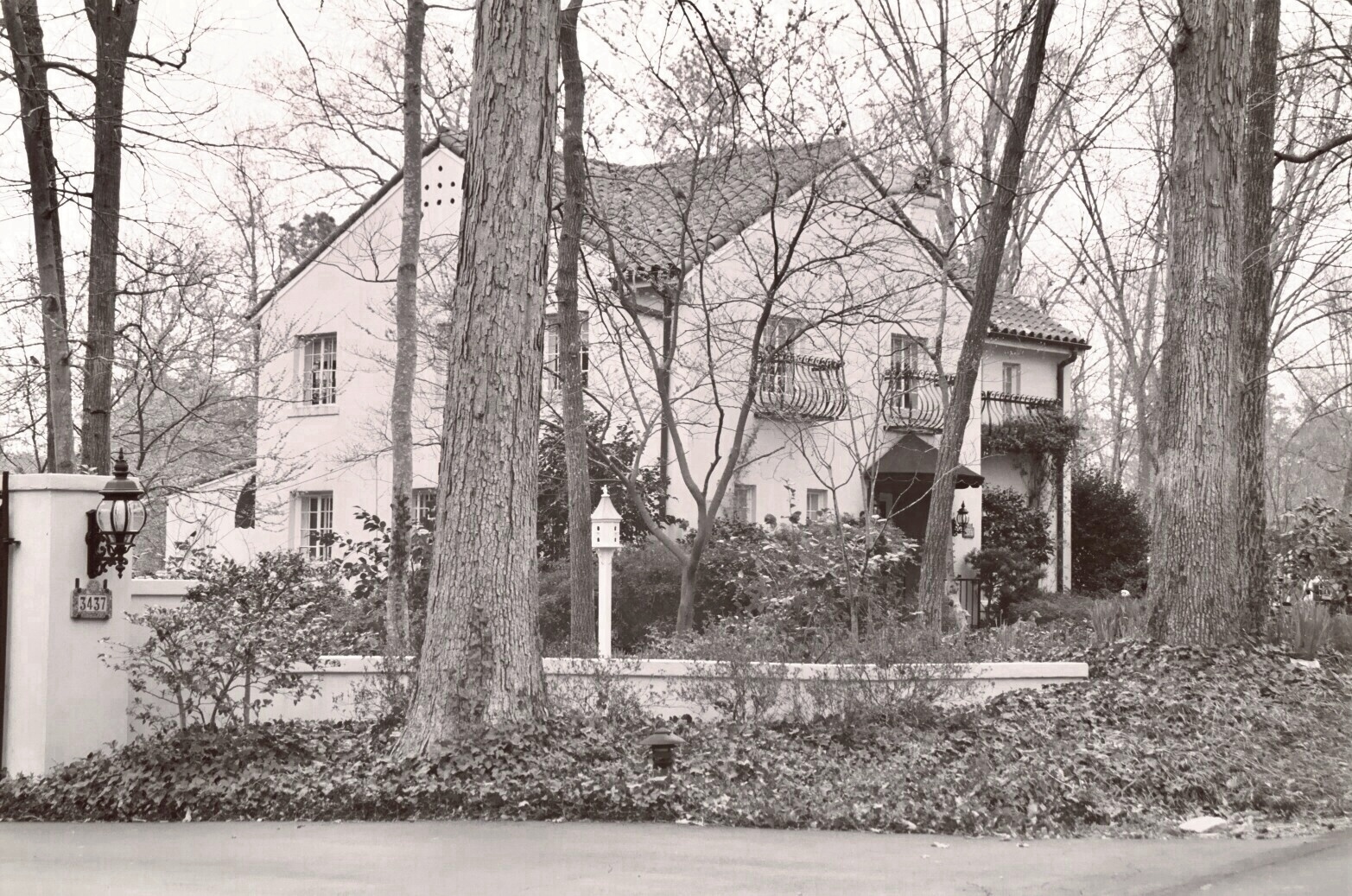 fenestration of metal casements identify the style of the building.  The most distinctive exterior

from the eaves and pigeon holes mark the top of the gables.  The Spanish Colonial Revival theme

is carried throughout the interior with tile floors, rooms at various levels, carved ceiling beams

and period mantelpiece in the living room, and an enclosed staircase to the second story.  The

earliest occupant of the house, which may be one of the ten original Hope Valley houses

constructed by the Mebane Company, was Dr. D. T. Smith, the first chairman of Bacteriology at

In the course of a 1980 renovation for the present owners, minor changes were made to

so that it would be more in keeping with its period  revival style.  One of the outstanding features

of the property is its enormous yard.  Extending from the rear sunporch are a series of walled and

terraced gardens that include a formal English garden with a fishpond;  ivy-covered grounds lead

to the dense woods, extending from the lowest stone terrace.

is one of the most significant houses in Durham.  What makes it so special, of course, is its high-

than the upper south, Durham has a small, respectable collection of Spanish eclectic houses.  Of

these, however, few are as interesting as the D.T. Smith House.  Before World War I, American

houses displaying Spanish influences were mostly in the Mission style.  These houses are

distinguished by their signature curvilinear, Alamo-like, gable parapet.  In Durham, the foremost

example of the Mission style is Hill House, the home of John Sprunt Hill on South Duke Street.

After the war, residential architects began to experiment with a range of home designs drawing

much more heavily on actual Spanish and Mediterranean precedents.  The movement toward

nationally and, as a result, things Spanish became the fashion.  Throughout the 1920s and ‘30s,

The D.T. .Smith House was designed by Durham architect, George Watts Carr.  Whether

the design was one chosen by Hope Valley’s developers, Mebane and Sharpe, or by Dr. and  Mrs.

Smith, is unclear from the record.  The Smiths bought the property in 1932, but the house may

have been built earlier.  All of the principal design elements of the Spanish Eclectic are present in

the house.  As you approach the front entry, notice the tile roof and the stuccoed walls.  The

recessed front door is surrounded by slate.  To your left is a curved wing wall.  On the wing to

your right, note the triple-arched focal window giving light to the large living room inside.  The

casement windows are set in thick, solid masonry walls.  The iron grills at the windows are no

original, but are in keeping with the Spanish Eclectic style.

The interior plan of the house is very similar to the Tudor Revival style Branscomb House,

also designed by George Watts Carr.  Immediately to your left as you enter is a small study.  On

the right is a sunken living room running the original width of the house.  Spanish decorative

features on the interior include the molded beams on the ceiling and the tile floors.  Unfortunately,

the original mantelpiece in the living room appears to have been removed by a previous owner.

At the rear of the hall is the dining room.  The tray ceiling here is not original, but the plaster cove

where the wall and ceiling join may be.  The large bay window supplies soft northern light all day

dining room to the small original kitchen.  The pantry was sacrificed to enlarge the kitchen some

time ago, but its cabinetry has survived.

Upstairs, you will find a large master bedroom with its own small fireplace and three

smaller bedrooms.  Running along the back of the house is what was once an open Spanish-style

balcony with fancy turned posts and  balusters.  Today it is an enclosed sitting area with what

must be the finest view in Hope Valley.

Below the house is a full basement containing a large, comfortable den, a bedroom and a

full bath as well.  These spaces appear to be modern additions.  The elaborate faux finishes on the

woodwork were applied in the 1980s.

Successive owners have added an enclosed patio and fountain to the terraced back lawn.

The current owners, Douglas and Barbara DeBank, added the pergola to support climbing

‘‘Lady Banks” roses, a floral pun on their name and an architectural modification wholly

appropriate to the style of the house.

Because it so adds to the architectural richness of the neighborhood, the Smith House has

always been a Hope Valley favorite. 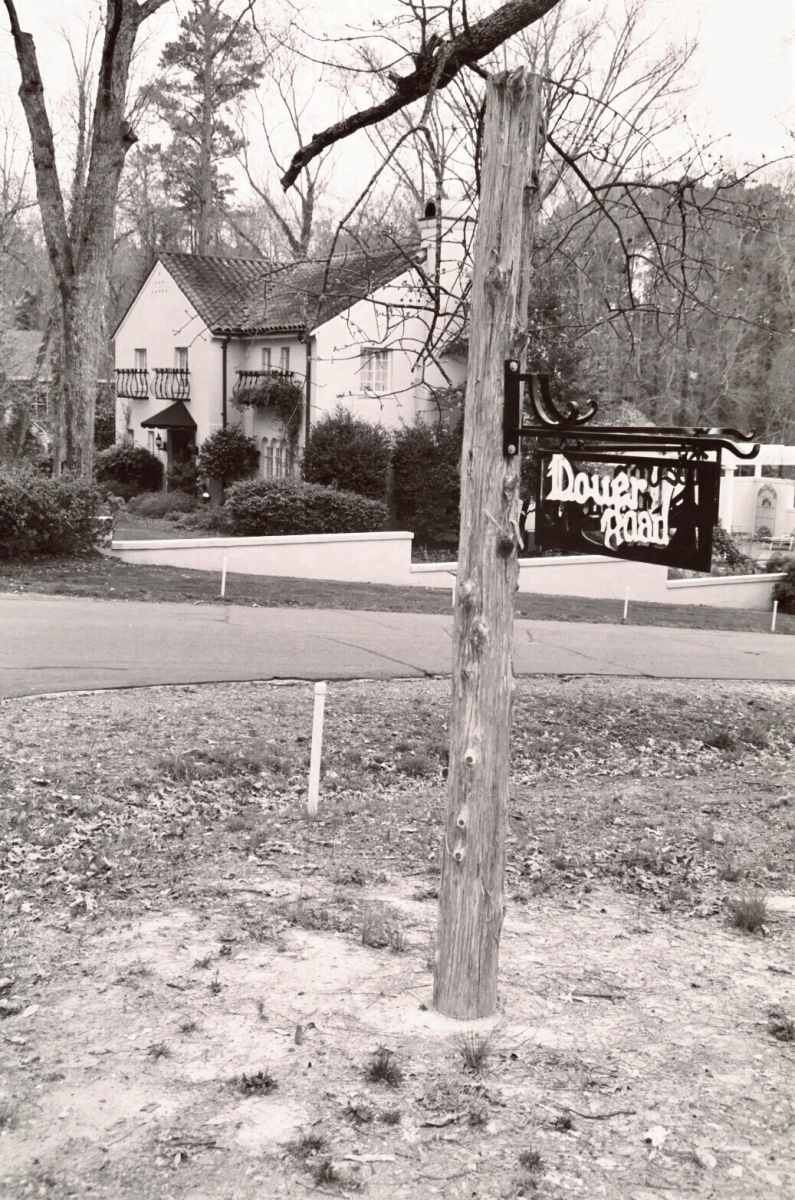