Dozens of houses once lined South Duke St., north of Morehead Avenue. Early 20th century commercial expansion took over the area immediately surrounding West Main Street, but the stretch of S. Duke Street south of West Chapel Hill remained residential through the 1950s. However, the triumvurate of car-centered commercialization, urban renewal, and highways (the Durham Freeway) took out all of these structures. 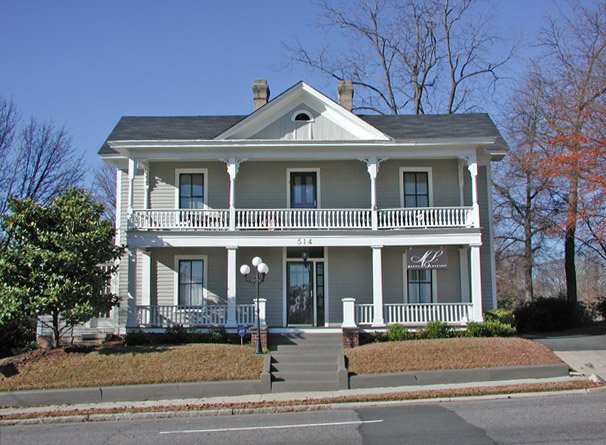 The Jourdan house at 514 S. Duke St. was built prior to 1910 by/for Sanislaus Jourdan, a native of France who owned the Jourdan Transfer Company in Durham. It is unusual for Durham, present or past, in its double-tiered porches.

However , from the aerial and Sanborn maps, it appears that the Jourdan House is similar in size/massing to most of the houses that once existed on Duke. Through what happy luck or stubbornness the Jourdan House survived while everything else was destroyed is a mystery to me.

It doesn't have much of a streetscape to look out on anymore. 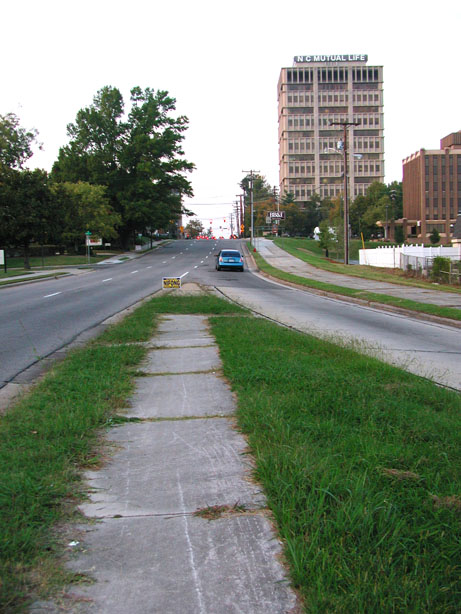 One of the ways that planners and architects describe how a street 'feels' is a concept called enclosure. The idea is that there are certain ratios of the width of the street+setbacks to the height of the buildings that 'work' - i.e. people feel comfortable walking on that street. I'd highly recommend Alan Jacobs' "Great Streets" if anyone is interested in this topic.

The widened post-1960s Duke St. does not have good enclosure:

1) The road is too wide (particularly for a one-way road) and the setbacks on the east side are too large.
2) The one story commercial structures that dominate the left side of the street are too small.

Ratios should optimally approach 1:1 (the building height to street+setback width ratio). Duke St. is certainly quite a bit below 1 (the width of street plus setback is greater than the average building height.) At the space between BB&T and the SE Credit Union, the width is 172 feet with a 1 story building on one side and an effectively 4-story building on the other. So the average height may be ~24 feet, which is a ratio of ~1:7. Alan Jacobs feels that streets need to stay in the range of 1:2- 1:2.5 to still be human scale.

When one gets up by the police station, Duke Memorial, and NC Mutual, the proportions are much better (certainly exceeding 1 in the case of the NC Mutual building.) There are other reasons why the streetscape isn't great there, but it's not because of enclosure.

The result of this lack of definition on S. Duke St. is a formless kind of space that feels uncomfortable for pedestrians, and, the evidence shows, encourages higher traffic speeds, because drivers sense that there isn't much for them to run into. Combined with the freeway onramp, this is a bad pedestrian environment. Buffers between sidewalk and road (like street trees or parallel parking) could mitigate this problem somewhat, but those aren't present either. Anecdotally, I can affirm that people accelerate as they come off the freeway in order to 'beat' cars coming north on Duke as they cross over to the left lane.

Thanks for introducing the

Thanks for introducing the "enclosure" term. I've often talked about how I love Amsterdam for its "human" scale -- 3 and 4 storey buildings set back from the canals by a width of two curbs, 1-1/2 car lanes, and a patio.

Me want more of that.

PhilIf you ever get the

If you ever get the chance, take a look at "Great Streets". It's a great book, with lots of line drawings/measurements of urban streetscapes, Amsterdam included.

Unfortunately, getting to enclosure becomes difficult in our fragmented planning environment. DOT owns Duke St., and all they care about is whether traffic is free-flowing or not. This part of Duke St. is covered by the relatively-new DDO, which has some aesthetic stipulations (like setbacks, height limits, and materials), but stops short of minimum heights.

I'm no expert or anything,

I'm no expert or anything, but when I think/hear about zoning and building height limits it usually has to do with maximum limits. I'd never really thought of minimum heighths before as being so important to ensuring pedestrian comfort but it makes a lot of sense. Great post.

You're absolutely right - maximum height limits are a very traditional part of zoning, primarily dating back to height limits for fighting fires when zoning was first established in the early 20th century. Ideas like minimum heights are relatively new and becoming a bit more common with the increasing acceptance of form-based codes. But it's still quite uncommon.