Regional co-operation, except on the name, leads tiny airport to grow rapidly during the second half of the 20th century 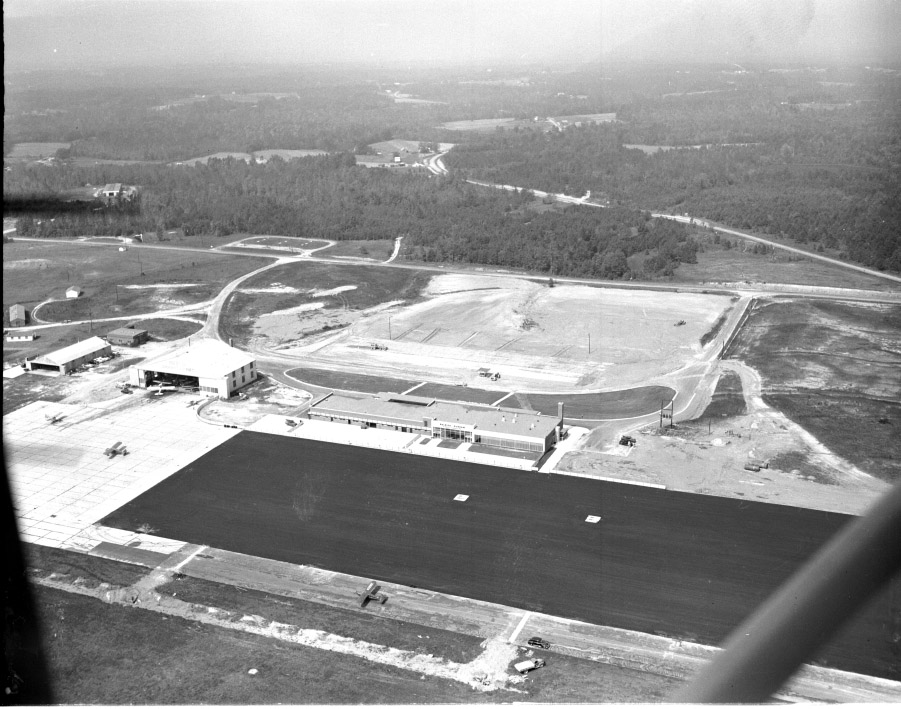 I've written previously about Durham and Raleigh's separate struggles to each get an airport, um, off the ground. Durham made efforts to establish a field north of town, with its most concentrated effort around the former county home site on North Roxboro Road. Each floundered in their attempts, until eventually entering a marriage of convenience to get 'er done.

In a full-page ad in area newspapers, Eastern Airlines President Captain Eddie Rickenbacker urges Wake and Durham counties and the cities of Durham and Raleigh to build an airport together. “Do not allow civic jealousies or selfish motives to creep into a project that means so much to all of you,” says Rickenbacker in 1940.

While under construction, RDU is taken over in 1942 by the federal government for use during World War II. The base is designated Raleigh-Durham Army Air Field in January 1943 with barracks and three runways becoming operational on May 1, 1943. The base serves as a training facility for the Army Air Corps until January 1, 1948.

Eastern Airlines is permitted use of the airfield and begins service from RDU to New York and Miami in 1943. These flights stop in Richmond, Washington , D.C., Baltimore and Philadelphia during the four-hour flight to New York. Stops were made in Charleston, Savannah, Jacksonville, Orlando, Vero Beach and West Palm during the six-hour flight to Miami.

1,223 acres of land acquired and used by the federal government during WWII at Raleigh-Durham Airport is formally returned to the four local governmental units in 1946. An initial investment by RDU of $65,000 is now worth $2,225,000. 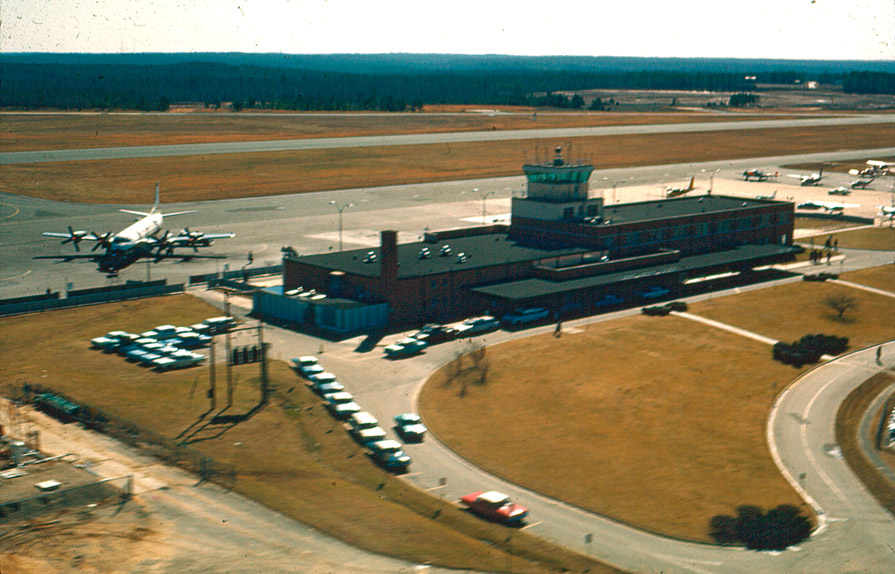 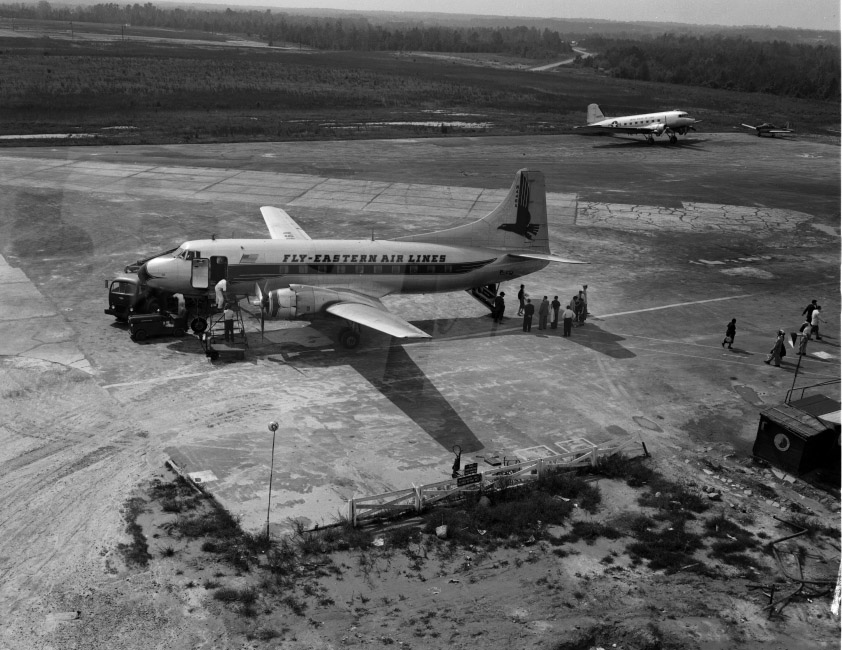 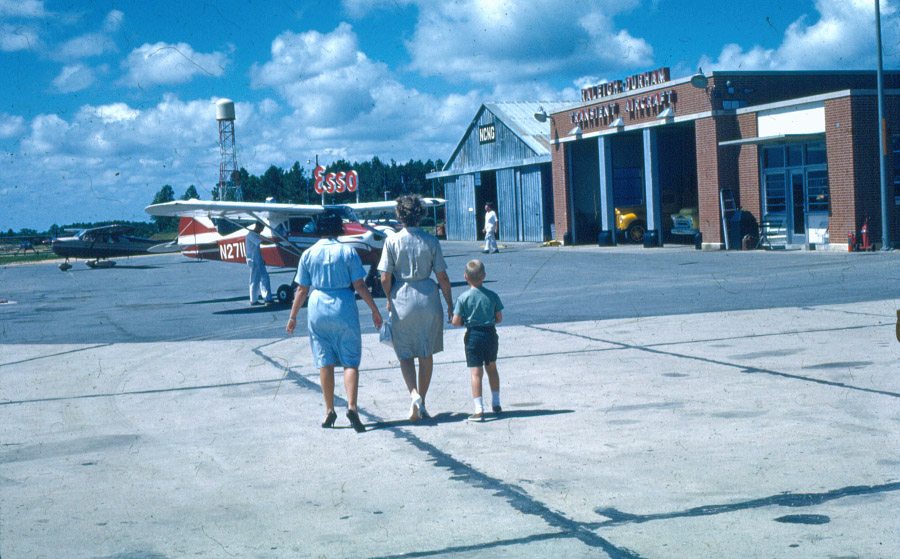 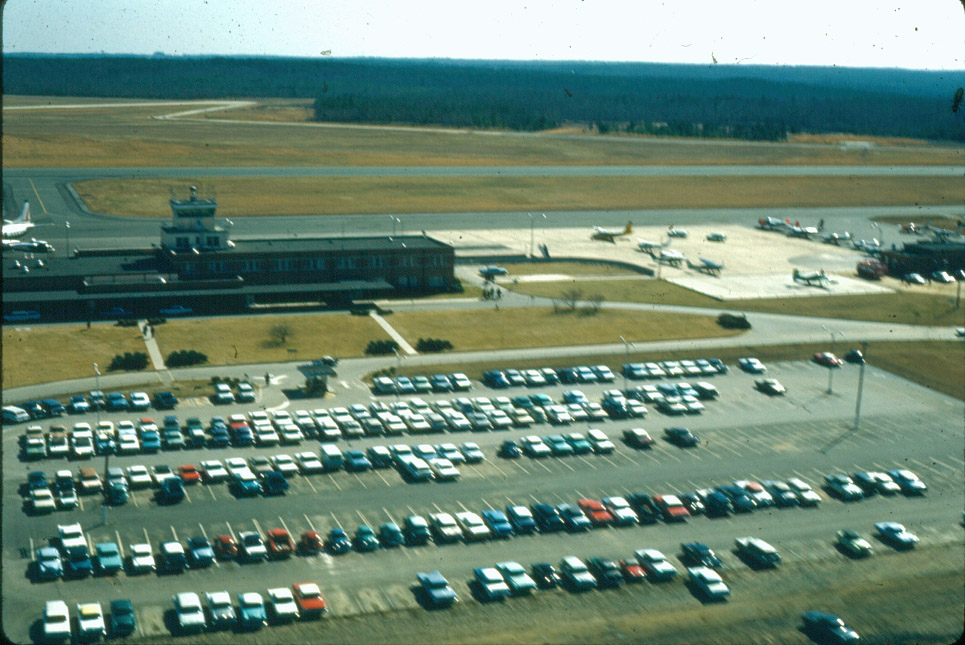 Terminal A opened to great fanfare in 1981.

American Airlines opens its north-south hub operation at RDU in the new Terminal C in June 1987, greatly increasing the size of RDU's operations with a new terminal including a new apron and runway. American brought RDU its first international flights to Bermuda, Cancun and Paris Orly.

In 1996, America n Airlines ceased hub operations at RDU due to difficulty competing with USAir's hub in Charlotte and Delta's hub in Atlanta for passengers traveling between smaller cities in the North and South. American began downsizing its RDU operations and eventually discontinued almost all of its mainline flights there, although it still runs a daily service to Gatwick and a number of commuter flights through American Eagle.

In the first half of 2000, RDU opens a new $40 million terminal area parking deck providing a total of 2,700 new parking spaces between the terminals.

Although the original Terminal still stands, hidden behind a lot of blue and brown stuff, impending renovations may remove all traces of what a podunk little airport RDU was ~50 years ago. 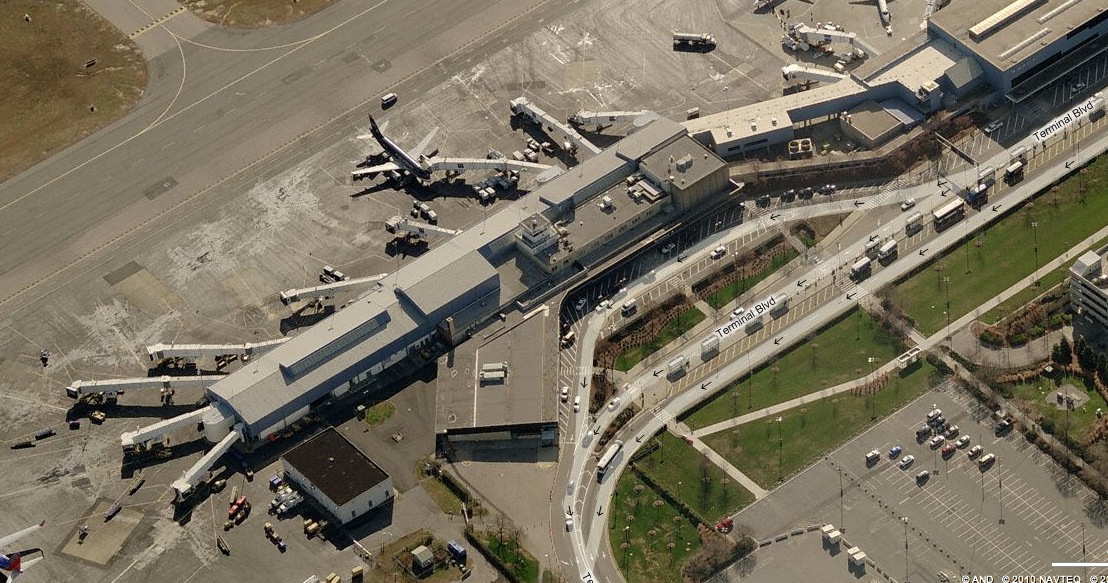 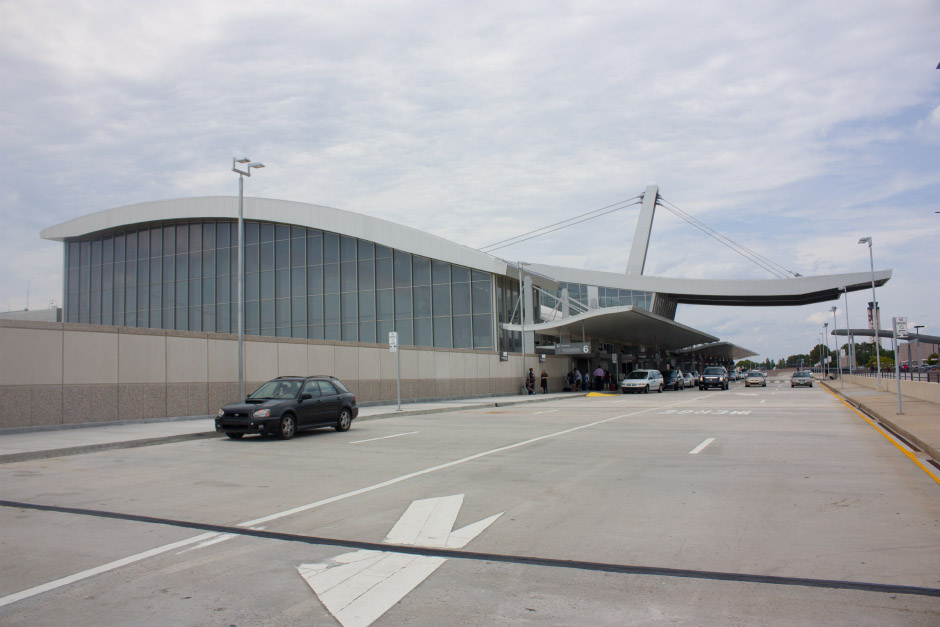 yes this more modern version of the Airport is definitely something of the 21st century...I remember the more modest airport and even walking to the planes while catching flights to go to school at Marquette in the early 80's and even during a couple of potential job interviews, a job fair in Rhode Island, and interviews in Shreveport and Louisville taking the old one as late as the late 80's.....

RaleighNative Interesting info about the

RaleighNative Interesting info about the Raleigh Municipal Airport, which I wasn't familiar with. I've written about Durham's various North Durham airport attempts previously, and various events held to publicize the landing of planes at those sites - my reading is that both Raleigh and Durham had viable, yet flawed facilities in the 1930s when the DC-3 was produced, and settled on a shared facility in order to get a viable modern airport. GK

Even in the late '60's there were only two "gates" at RDU. You waited inside and when they called your flight you went outside where there was a 3' chain link fence separating passengers from the tarmac. You gave your ticket to the attendant outside and walked through a gate in the fence to board your plane. No security of course. And for other "older" readers out there you all recall when you dressed up to fly. Even in college I always boarded a plan in a jacket and tie as did everyone else. Except for the aircraft used back then, I often long for those days.....

I've written previously about Durham and Raleigh's separate struggles to each get an airport, um, off the ground. Durham made efforts to establish a field north of town, with its most concentrated effort around the former county home site on North Roxboro Road. Each floundered in their attempts, until eventually entering a marriage of convenience to get 'er done. The Raleigh Municipal Airport, located basically where Tryon Rd intersects with US70/401 in south Raleigh was dedicated in 1929. It was established by the Curtiss-Wright company. Eastern Air Transport, predecessor of Eastern Airlines, began passenger service there in 1932 with daily flights to New York and Miami. The three runways were paved in 1938 and served until 1972 when it was closed. As a child I viewed several air shows there and when I could save enough money I would go and take flying tours of Raleigh (they charged a whopping $.01 per pound of body weight). My brother and his buddies from Ft. Bragg would take me See more...

Yes, there was a motel

Yes, there was a motel out front of the old terminal area before a long gone parking deck was built. My dad use to take me to the original terminal on Sunday afternoons, just to watch the take offs and landings. No security in the 1950s.

The land at the north

The land at the north end of the original runway and back of the old cemetery on Cemetery Road was my mother's homeplace. State of North Carolina made the first purchase July 14, 1941. 8.5 acres @ $30.00 per acre for a total of $255.00. On December 4, 1941, the City of Durham purchased the remaining 82.15 acres. All of this is recorded in the Wake County register of deeds

Wasn't there also a motel

Wasn't there also a motel inside the parking lot up until the original Terminal C was constructed?

Looking at the photos, the

Looking at the photos, the first photo is likely 1955 or perhaps even slightly earlier, as it looks as though the parking lot is under construction. The color photos courtesy of Barry Norman all appear to be the early 1960s, due to the presence of the control tower, the absence of the large hangar visible in the first photo (the curved section of the ramp is remains next to the visibly brighter section of concrete next to the fire truck and Transient Aircraft building in the third color photo. The features of the Cessna 172 in the second color photo makes it at least 1963. (The PA-22 in the foreground isn't so useful, for dating.) The Martin 4-0-4 in the shot with the C-47 (DC-3) in the background, places that photo between 1951 and 1962, but I'd wager that it's prior to the beginning of construction of the permanent terminal that opened in 1955, due to the terrible condition of the ramp.

I remember well when the

I remember well when the "first" RDU terminal opened in 1955. It seemed like such a GRAND place. Prior to that the terminal consisted of a couple of barracks. Back in 1955 I recall only one runway and one taxiway.

I second Dan S. on

I second Dan S. on the notion that the undated color photo is much more likely from the 1960s than the 1950s. The Lockheed Electra didn't enter commercial service until early 1959, and the styling of the cars at curbside and in the driveway (I'm thinking the red sedan) is very definitely early 1960s.

Mid 60's I took my brother who was in the Army, to RDU to catch a flight back to Ft.Hood, Texas. We watched the Piedmont plane he was supposed to catch roll in. Both engines on the plane (might have been a DC3) were smoking and shaking as it pulled up. I told him if that was his plane I would drive him to Texas before I let him take it. Luckily they couldn't get one of the engines restarted and switched him to another airline. We also would go out and watch planes come and go, seems strange now how free we were to walk around. But they do have a nice observation area there now if you want to see some planes.

The second "undated" photograph, with

The second "undated" photograph, with the 4-engine turboprop (likely a Lockheed L-188 electra) was probably taken in the early 1960s, judging by the cars. There's an interesting site that I stumbled upon a while back, that's dedicated to abandoned and retired airports, that has some extensive coverage on the Raleigh Municipal Airport and the housing development that sits there, now. http://www.airfields-freeman.com/NC/Airfields_NC_Raleigh.htm

In the late 60's early 70's before hijackings caused airports to implement security, and when I was a little kid, my family visited the airport often because my dad traveled for work. A dramatic change from that period to today is how you got there from our corner of Durham - via two-lane Nelson Road that wended its way thru back woods and along farm fields and past quite a few haunted (seemingly to a kid), dilapidated country pine board houses to the airport. And I can well remember walking out with my family utterly unhindered to the boarding area, which was just asphalt under the open sky, to wave goodbye or to greet my Dad, and clambering up barefoot onto the waist-high steel fence that separated us from the aircraft, and feeling the blast in my face as planes pulled away from the gate and exulting at the scream of the engines. Those Piedmont turboprops could melt eardrums. I loved it.

Michael Bacon is absolutely right. I miss those days. In the Spring of 1969 Janis Joplin performed a concert at Duke. Early the next morning I took my brother to the airport and there was Janis and her band (Big Brother and the Holding Company) goofing around in the terminal. She was in a wheelchair and her band members were pushing her across the floor like shuffleboard. I walked right up to her and said, "I love you Janis." To which she replied, "I love you too man." So I can honestly say that Janis Joplin told me she loved me! Can you imagine that scene in an airport today? She'd have an entourage and security would be so tight it would make your head hurt! Ah, memories.......

My dad tells stories of

My dad tells stories of driving up and parking in front of this terminal in the early '70s 10 minutes before his flight left, grabbing his bag and running out onto the tarmac, handing it to the baggage check (a guy standing next to the plane), and getting on board. I may have some of the details wrong, but it's a very different picture than the totalitarian state of wasted time that exists in modern airports.

And baggage claim was outdoors,

And baggage claim was outdoors, out in front of the terminal and completely open to the elements - might have had a shed roof over it.

I seem to remember a

I seem to remember a rack of umbrellas they could roll out to the bottom of the steps of the plane before they had jetways at the original Terminal 1. Before I-40 was built, you really thought from the air you were landing in the middle of a huge forest and wondered where exactly "Raleigh" and "Durham" were! American isn't what it used to be out there, but they still have 4 or 5 flights a day on regular jets to O'Hare, Dallas, and Miami. Also, their daily round trip to London now goes to Heathrow, not Gatwick.