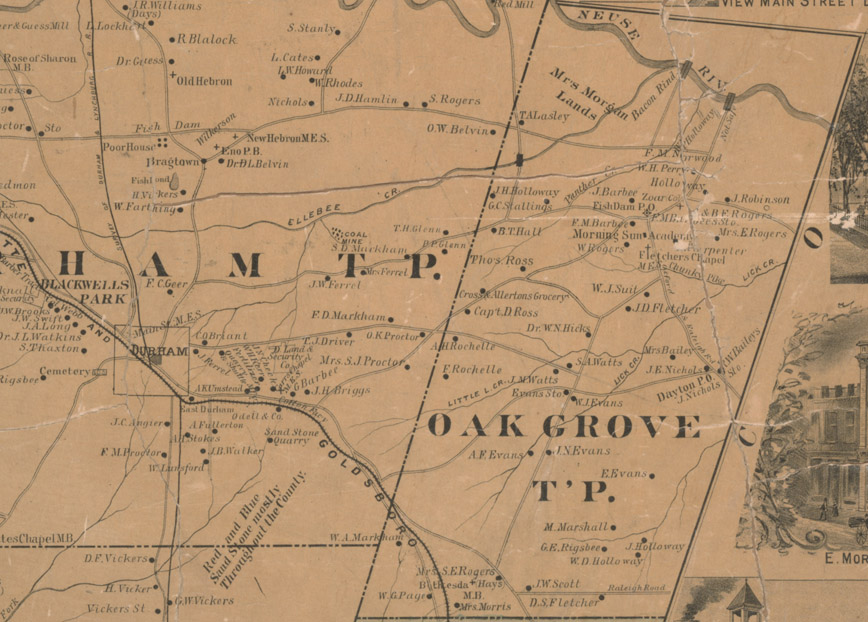 Later consisting of the crossroads communities of Gorman and Oak Grove, the township was the site of scattered farms and small private schools that originated throughout the 19th century. One private school, the Dayton Academy, would later be the site of the Olive Branch Baptist Church. 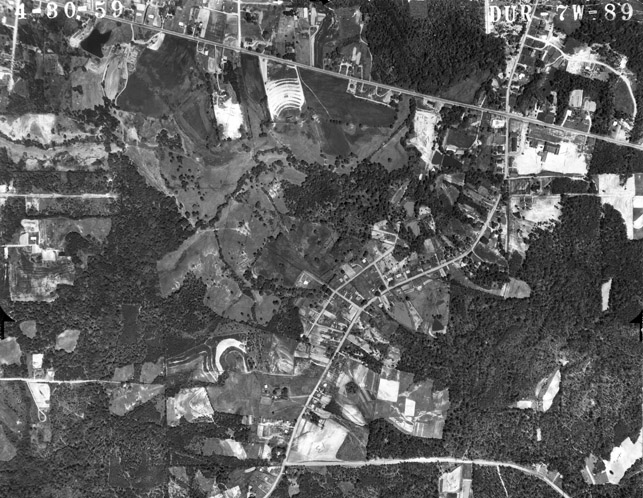 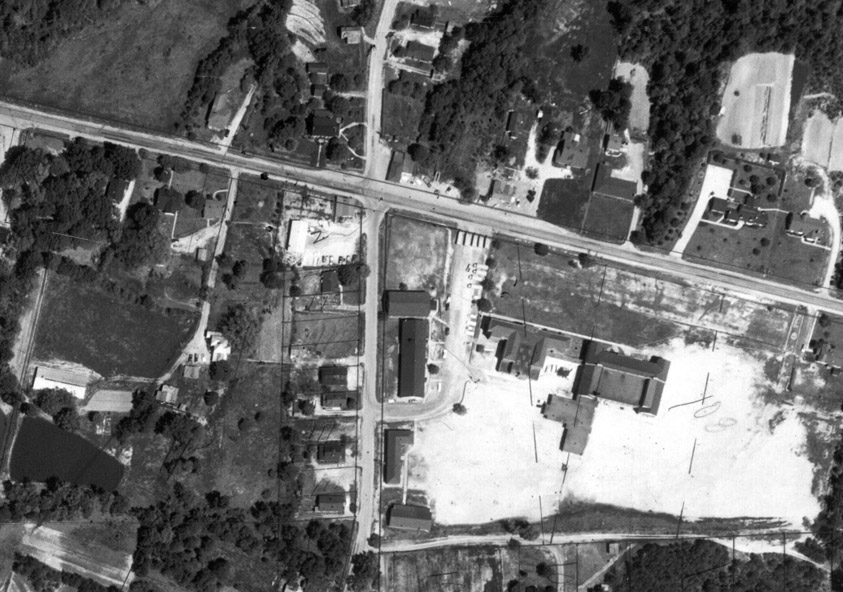 More magnified view of the intersection of Mineral Springs Road and NC 98, 1959.

I'm unclear as to when the Oak Grove School at Mineral Springs and Highway 98 was established. Although the brick structures appear to date from the 1920s-1930s, there appears to have been a 'farm school' on the site dating back to at least the early 20th Century.

One of the only tidbits I could find about the school was that, coordinated by the Rural War Production Training Program, a cannery was constructed by "Oak Grove agriculture students" during World War I for the community to utilize to can fruits and vegetables from "Victory Gardens"

As may be clear by this point, I know little about Oak Grove - I'll hope that some commenters fill in the history for me here; much of the history of these small communities simply hasn't been written down.

It seems that Durham County tore down the old Oak Grove School in the 1980s. It was replaced with a newer elementary school.

There used to be an old

There used to be an old cemetery in this area, probably 50 or 60 graves, back in the woods off Davies Dr. It was in pretty bad shape 30 years ago when we went traipsing through it trying to locate a particular grave. The last I had heard, which was many years ago, there was talk of buiding or farming on it. Would anyone know what happened to it?

Regarding the history of Oak

Regarding the history of Oak Grove - in Jean Bradley Anderson's Durham County - A History of Durham County, North Carolina (page 19) "Among the first to take up land in present Durham County were William Reeves, who received 400 acres where Ellerbee Creek runs into Neuse River (1746)...". William Reeves was my ggggg grandfather and he was also an ancestor of Frederick Geer whose farm house you previously mentioned in this forum.

The Markham map of Orange County platting 1800 of the earliest grants in the Neuse basin, show William Reeves, John Alston, Thomas Tomlinson and Henry McCulloch, among others with grants along the Neuse River in this part of Oak Grove once known as the Fishdam area.

BTW, I really like your blog. I live in Texas and enjoy reading about and seeing the pictures Durham.

Interesting post! If you use the timeline feature in Google Earth, you will see a satellite picture of the school from March of 1993. The original buildings appear to still be standing alongside the new building. The building must have been demolished sometime after March of 1993.

I grew up about a mile from

I grew up about a mile from Oak Grove Elementary on S. Mineral Springs. Thanks for getting into my 'neighborhood', Gary.

That references Fish Dam Road, an old East/West path used by local natives and early settlers. My father grew up on a farm in the area south of the old Fish Dam Road where current Durham and Wake Counties intersect at Cheek Rd. He was on the Wak Co. side. There were signs of Indian settlement on their farm back in the 40's/50's when he was a young boy.

These are some good links to info regarding Fish Dam Rd. including a video of NCSSM students assisting Mr. Joe Liles of NCSSM in uncovering artifacts.

Gary, I apologize in advance if you don't like links. Please feel free to delete them if needed.

the graveyard at the end of

the graveyard at the end of Davie Drive, off Glenn Road was an old Glenn family cemetery. This was used prior to the present family cemetery which is located on Joyner Road, off Geer St. The housing development, Glen Stone, was built right up next to the old Davie Drive Cemetery.

I attended Oak Grove for

I attended Oak Grove for grades 1-3 during 1966-69.....we played flag football, basketball and baseball in the Oak Grove Athletic Association...the gym at that time was a wood-frame structure from the 1930s?...perhaps even a tad earlier.e...by 1968-69 we began to compete with kids in the city as integration was in full swing....prior to that our opponents were bethesda, holt, glenn, lowes grove,etc....one really cool thing about playing ball at the Boys Club on Alston was being introduced to the incredible hot dogs at the old paschall's grill off holloway....have yet to have any better!.....Durham was a FASCINATING place in the 1960s

I attended Oak Grove from

I attended Oak Grove from 1963 till 1969, grades 2 through 6. I have so many fond memories, I wish now I had attended the open house prior to demolition. The Little Rebel panty store across the street introduced me to Icee frozen drinks paid for from drink bottles discovered on the school grounds. We practiced flag football on the front lawn, baseball on the spacious playgrounds behind and basketball in the cold dark gym. The school was gigantic, the long hallways dark and the most incredible library exposing me to hot rod and sports illustrated, just maybe my favorite school provided journals..lol. I rode bus 62 during those years and recall the widening of Wake Forest Highway/Hollaway Street all the route. She was much more reliable than ol bus 29 which broke down once a week it seemed. I must say, I miss seeing the ol lady when I drive by

Ok, another story from my

Ok, another story from my maternal grandmother, who remembered that she was going to Oak Grove school in 1912 when the Titanic sank. It would have been about that time when she met a fellow student who later became my grandfather. Sorry she didn't tell me what the school building was like in those days.

I attended first grade at

I attended first grade at Oak Grove in 1954. My teacher was Mrs. Bliss. My mother( currently 90 yrs old) and all her siblings attended and graduated from Oak Grove. Many relatives....Shaws Chandlers, and Pollards lived near here.......on down toward Olive Branch Baptist Church Rod Franklin

wow
I I started 1st grade in 1957. teacher mrs beard same teacher my father had when he was in school.all the way till 5th grade I had the same teachers .boy were they tough then.so much water under the bridge since then will have to get back while on the pc. lots of stories to tell

The Mrs. Beard that David Fletcher refers to is Mr

The Mrs. Beard that David Fletcher refers to is Mrs. Virginia Hicks Beard, a graduate of the first graduating class of Duke University (1925), having been schooled at Trinity College for 3 years. She taught many years at Southside School, and loved teaching and her students, keeping in touch with a number of them for years into her retirement. Her college scrapbook is in the Duke Archives, and one can get an idea of her personality from its listed contents: http://library.duke.edu/rubenstein/findingaids/uahvh/

I knew her in her retired years; she lived in the house her grandfather, Dr. William Norwood Hicks built (still standing) on N. Mineral Springs Road. He had attended medical school in Philadelphia, but transferred to Richmond when the Civil War threatened. He used the north parlor as his clinic. She died in 1989.

Does anyone have any

Does anyone have any information about Mount Zoar Baptist Church? It is on the 1890s map (listed as 'Zoar').

I taught third grade '67-'68 at Oak Grove. I enjoyed hearing the stories of the school from the older teachers. I've wondered where my students ended up over the years. I moved back to Durham last fall after living in Chapel Hill for many years.

I went to Oak Grove from 1966-1971 and I can't remember my second grade teacher's name that's how I ended up on this site. I also grew up close to the school and close to where Mrs. Beard lived. I didn't get to have Mrs. Beard but knew she was very kind . When I would walk past her house she would speak. She had a great dane, if I remember right , he would chase us down the chained link fence line, I was so thankful he was in a fence . My first grade teacher was very strict. I will not say her name but I was very fearful of school. The principle Mr. Bass would sing to us on the loud speaker in his very deep base voice. I remember a song with words"somebody did a golden deed" . I also remember some wonderful teachers like Mrs. Murray in 6th grade.

Does anyone have any info on

Does anyone have any info on the Oak Grove Athletic Association? How did it originate? Who are the original owners of the land? It appears to have so much history