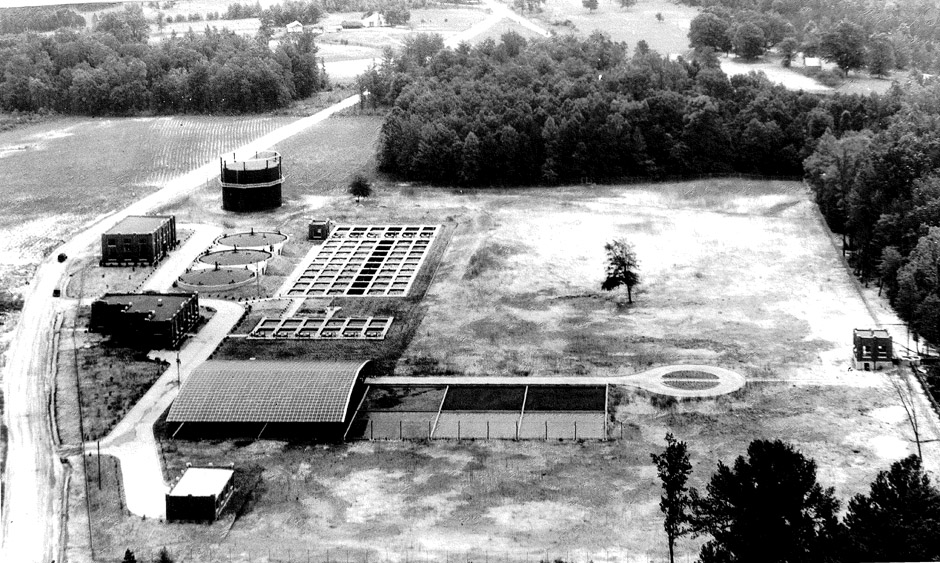 Durham implemented three major water infrastructure projects from 1917-1934, designed to provide an abundant water supply (damming of the Flat River to create Lake Michie), a clean and steady water supply (the Durham Water Works, and large scale sanitary treatment of the city sewerage, implemented by the construction of the Northside Treatment Plant in 1934. (Two other plants were constructed to handle wastewater as well, each a good bit smaller.)

All three projects were designed by engineer William Piatt, whose firm continued to oversee additions and expansions of these still-active facilities through much of the mid-late 20th century.

The process used a combination of straightforward and then-very-advanced technology to accomplish its mission:

1) Wastewater would enter the plant through two 30 inch pipes
2) It would first go through a screening room, where the largest solids were ground until they would pass through a 3/8 inch screen
3) The wastewater was then pumped into settling tanks to allow solid and liquid to separate. Solids that settled to the bottom and oil at the top would both be skimmed/separated and pumped to digestion tanks
4) The liquid would be pumped to aeration tanks to be oxygenated, revving up the bacterial action.
5) The liquid moved into final settling tanks to draw off any remaining solids
6) After bacteria had fully had its way with it and been drawn off, the remaining effluent was pumped into Ellerbee Creek
7) Back at the digestion tanks, different bacteria was at work on the solids, producing methane gas
8) And this is the very cool part - the digesters had 'floating tops' which would expand to collect methane, which would, under its own pressure, pipe into a holding tank, which would then, under its own pressure, pump into huge engines in the power plant. This methane would power the engines to run the entire plant Memo to people who think getting people to use 'green technology' is about marketing, promotion, and blabbing about the novelty of it endlessly - it's been around awhile.
9) The fully 'digested' solids would then be spread under a huge glass awning, where it would be dried to create fertilizer.

Rinse and repeat as necessary. 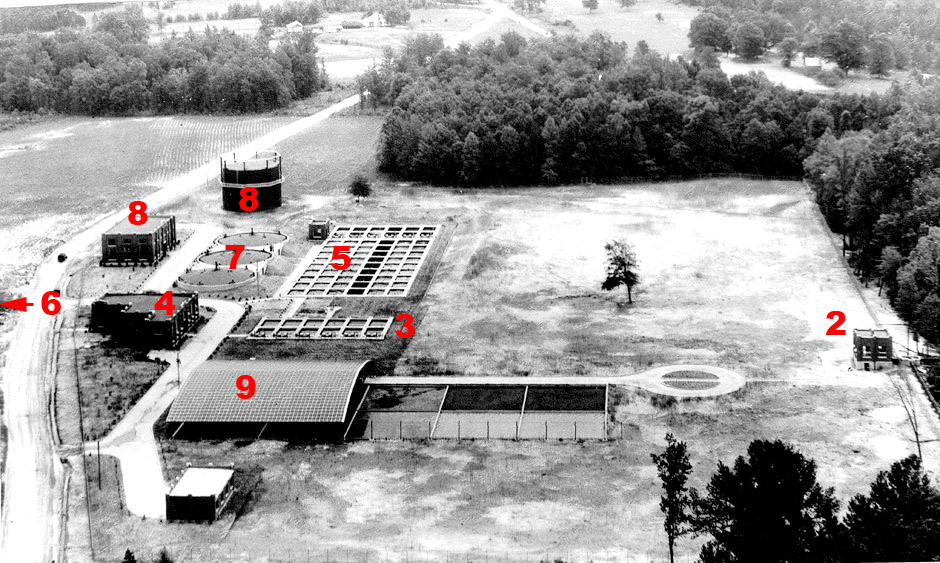 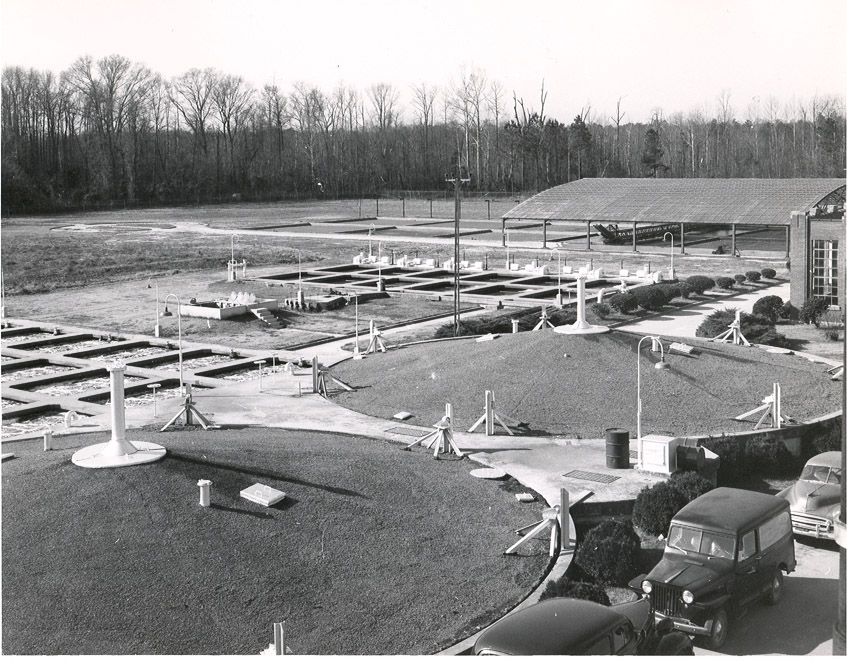 Digesters and glass awning structure from the gas collector, 1940s. 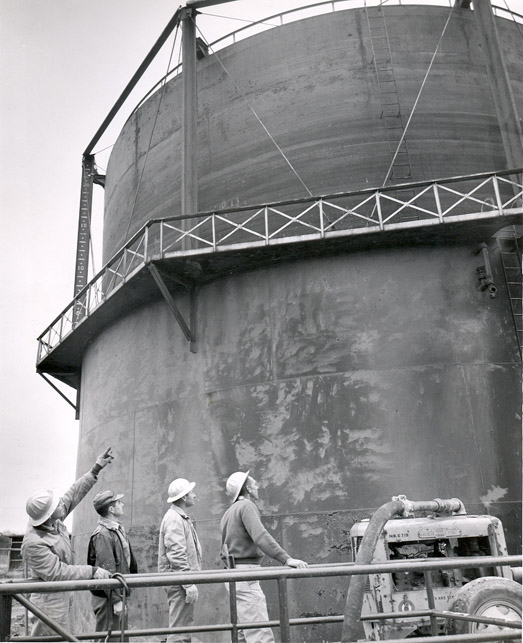 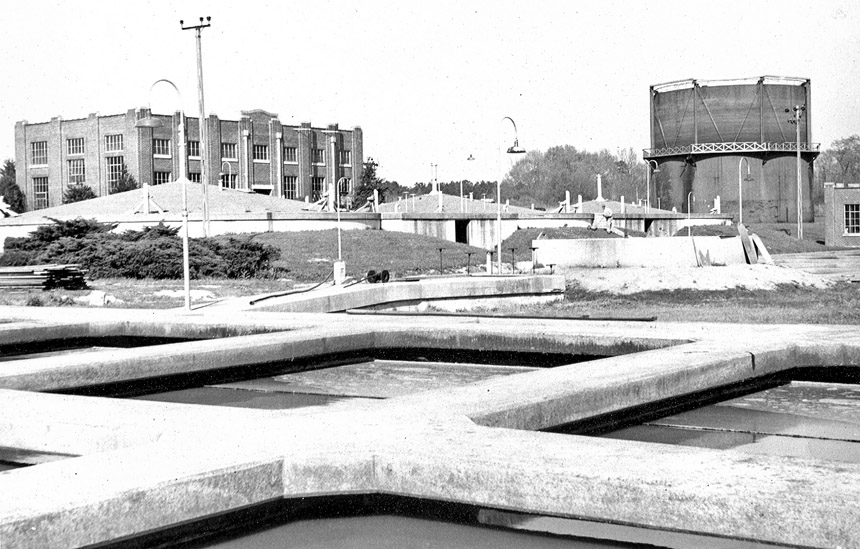 Settling tanks in the foreground - digesters, gas collector, and power plant in the background.

In 1954, the plant was expanded considerably, adding a new laboratory structure, a new screening room, additional digesters and settling tanks 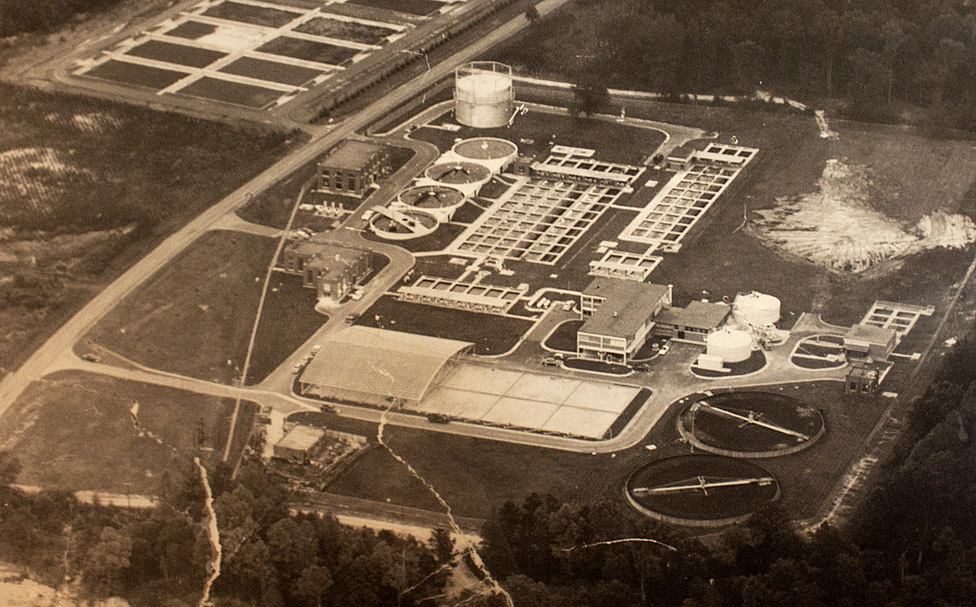 This infrastructure continued to serve the city through the 1970s 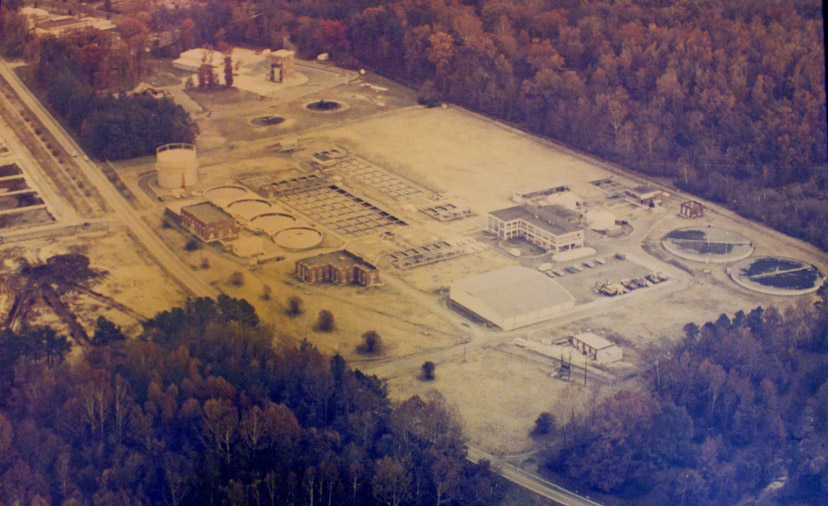 In the 1980s, a new intake, screening, and primary settling tanks were added. 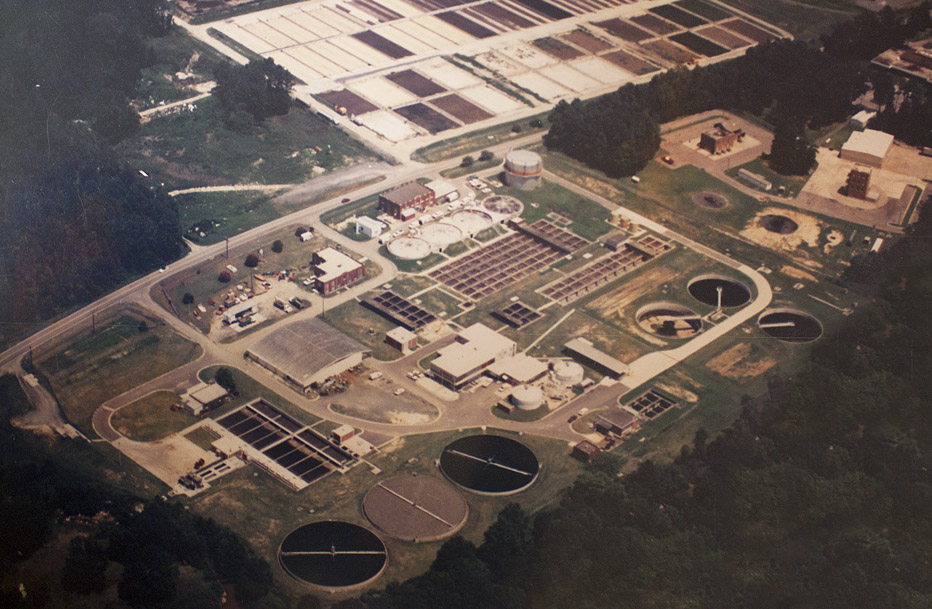 In 1994, a major expansion of the plant occurred on the north side of East Club Blvd. Since that time, much of the original plant has fallen into disuse. Unfortunately, the plant no longer uses the methane from the digesters to power the plant - power comes from good ol' Duke Energy. Small portions of the original plant remain used, but much of it is empty, and thus threatened the next time expansion is necessary. (Or the buildings simply fall into disrepair. 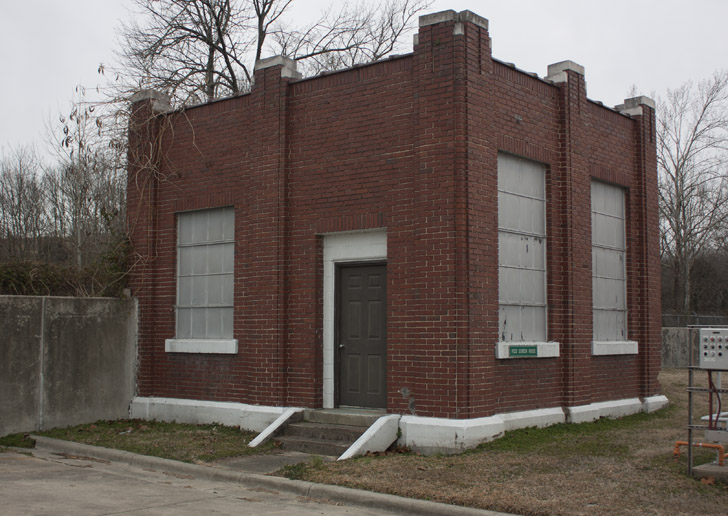 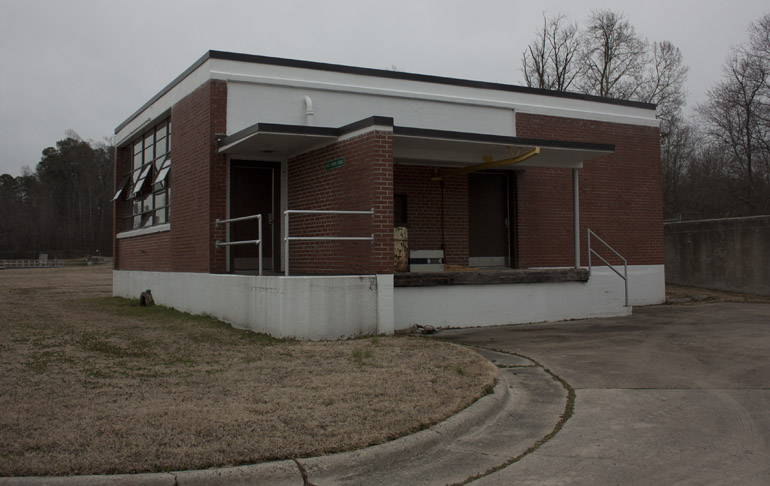 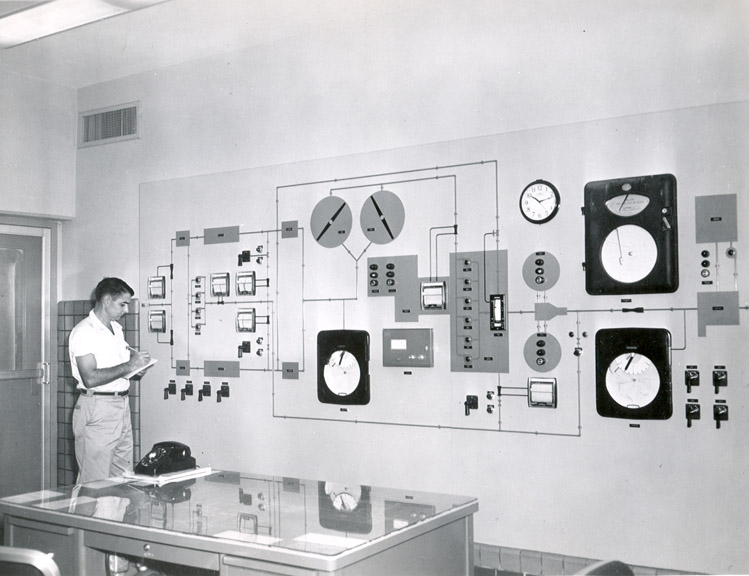 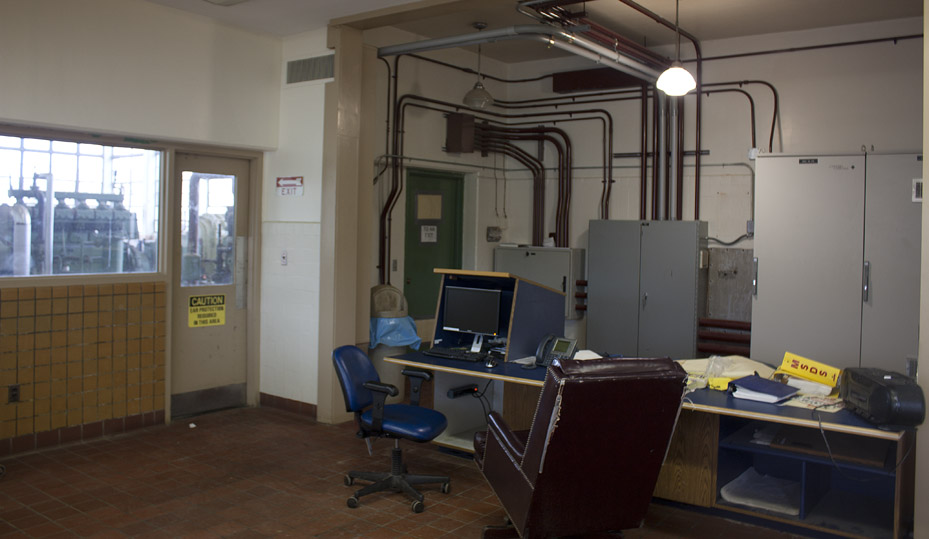 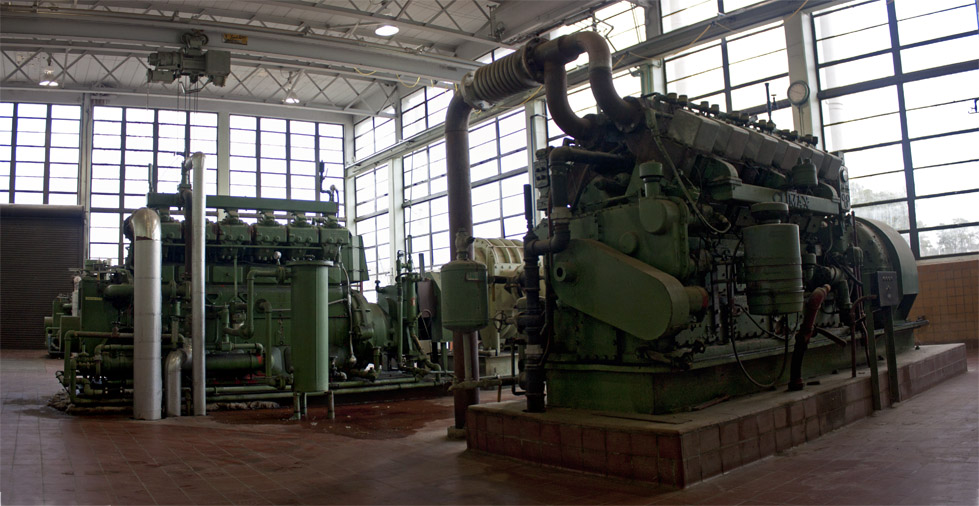 Engines that used to power the plant. 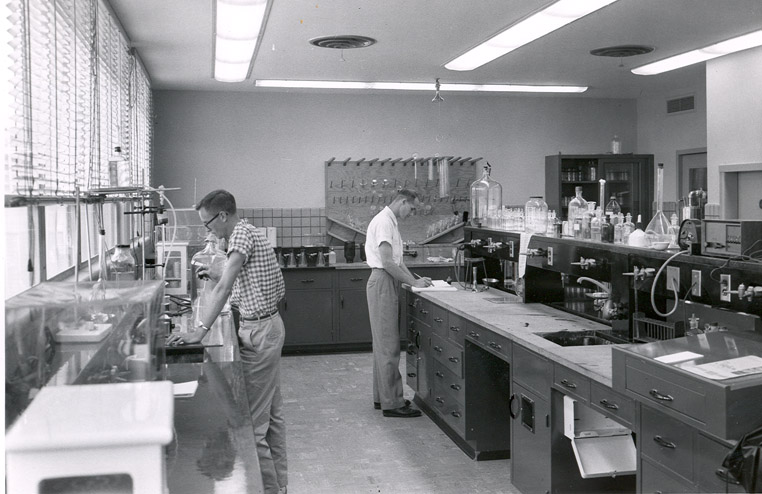 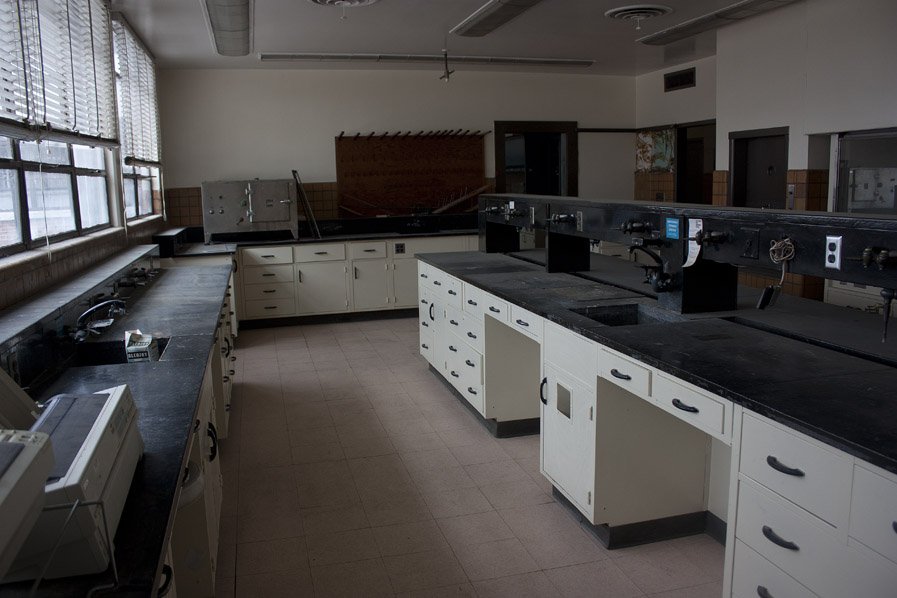 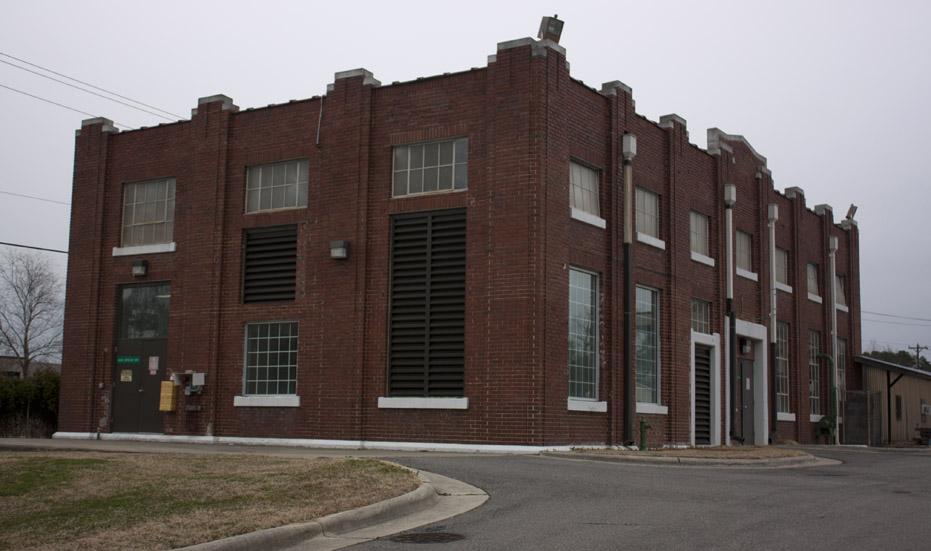 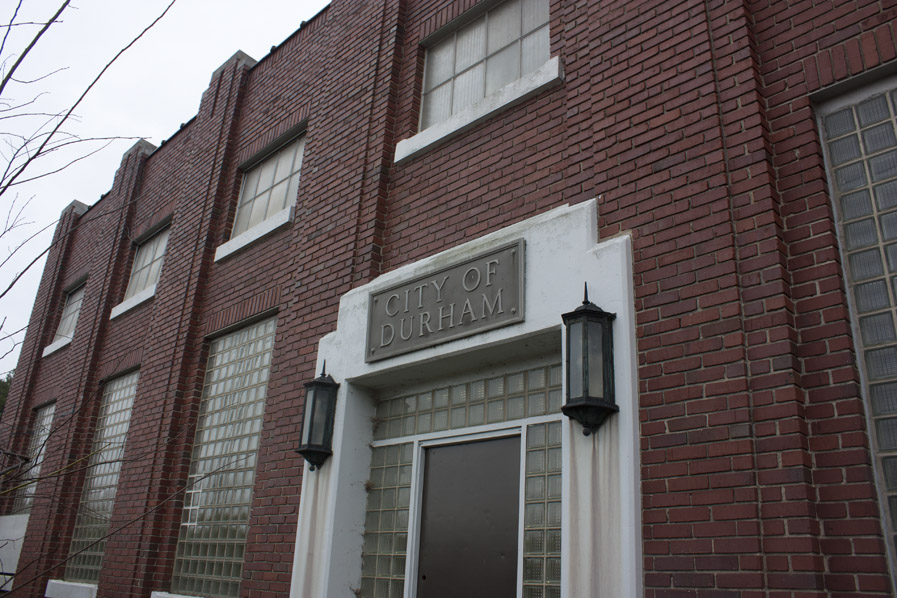 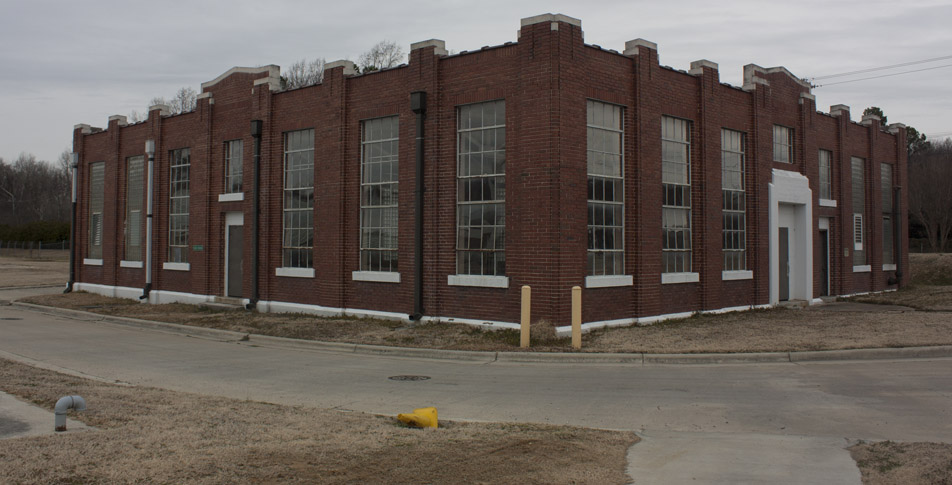 View from on top of the gas collector, looking west (yes, I clambered up there.) 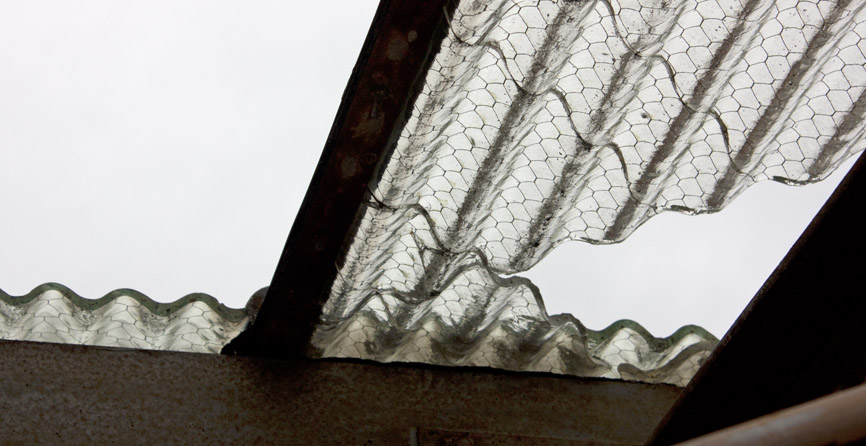 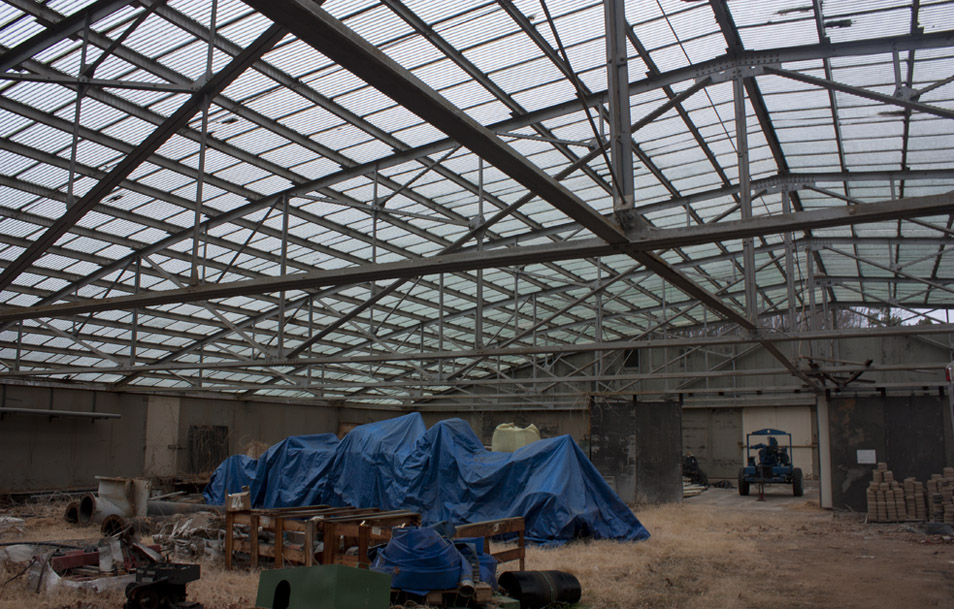 Inside of the glass awning. What a cool 'building' 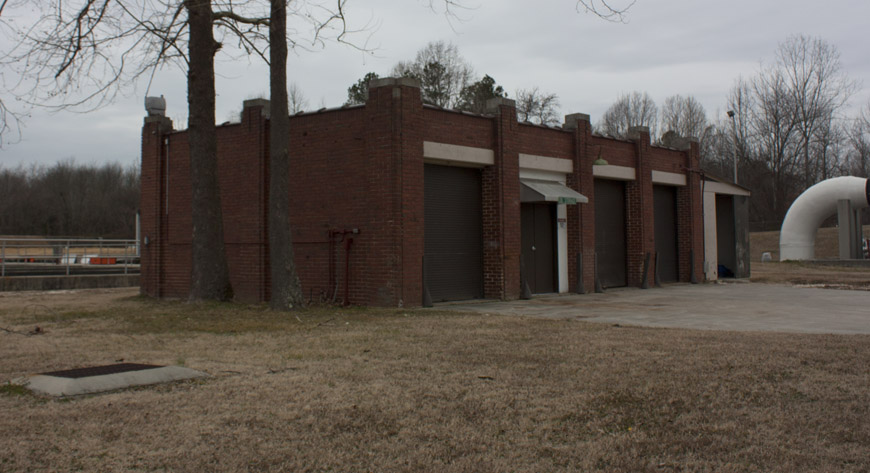 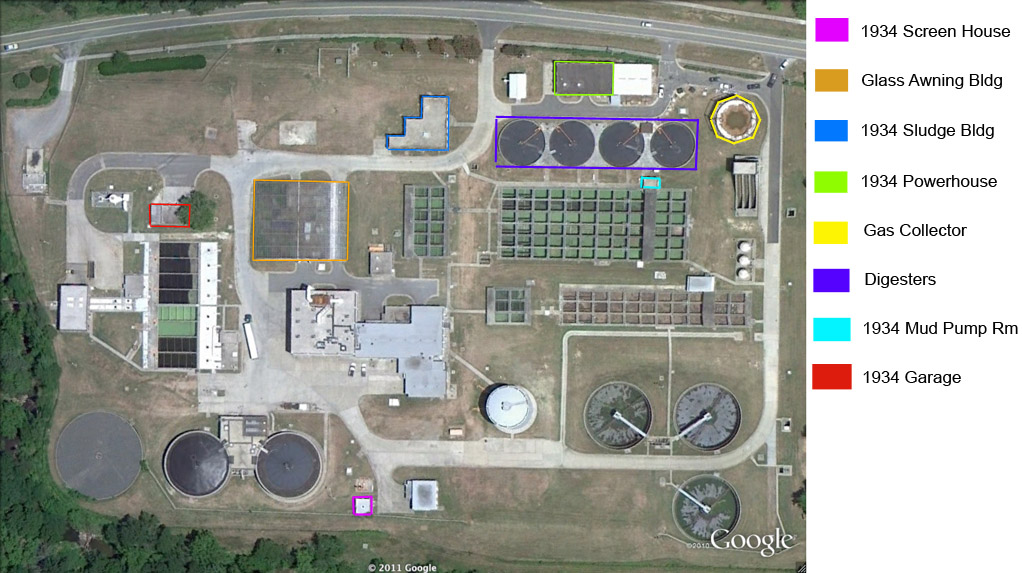 Markup of the original facility on 2010 satellite imagery.

The treatment facility on the north side now includes ultraviolet treatment that kills remaining bacteria in the water - the city is in the process of further upgrading this capacity. 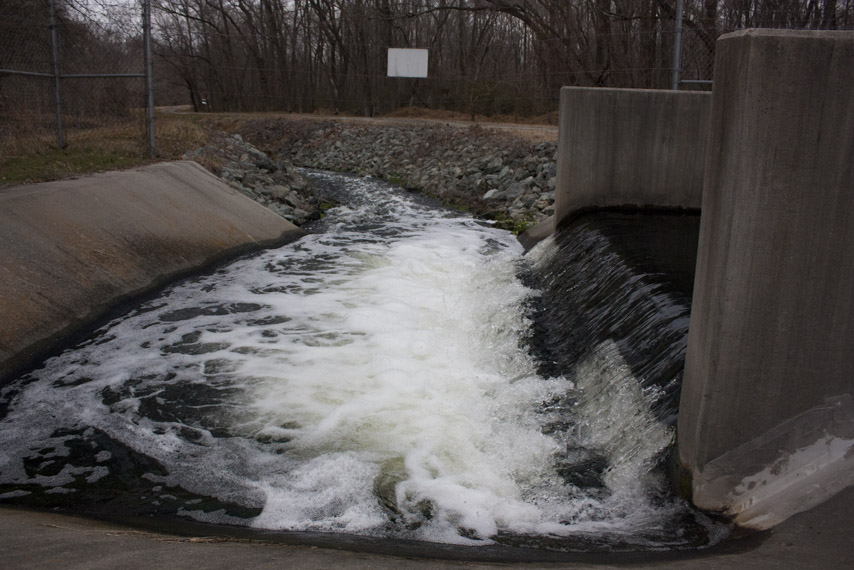 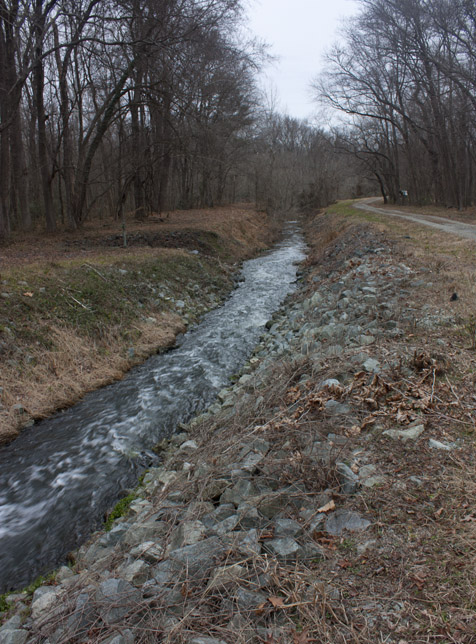 I'm indebted to Jason Cash of the Northside Treatment Plant for showing me around and providing me with historic pictures. Jason is one of those 'stewards' that I come across that have taken personal responsibility for a piece of Durham history for the benefit of all of us - thanks Jason

Many thanks for focusing on

Many thanks for focusing on infratructure with one of your posts. I really enjoyed it.

Gary, do you know what they

Gary, do you know what they do with the methane these days, and why they no longer use it for power?

Methane is a relatively

Methane is a relatively potent greenhouse gas. Compared with carbon dioxide, it has a high global warming potential of 72 (calculated over a period of 20 years) or 25 (for a time period of 100 years).[2] It has a net lifetime of about 10 years,[3] and is primarily removed by reaction with hydroxyl radicals in the atmosphere, producing carbon dioxide and water.

Methane also affects the degradation of the ozone layer.
--
That's right, even cow farts
are melting the icebergs.

Great infomation. My uncle's family used to own a ton of property right around the corner from that place. It was on Dearborn Drive. They are the Holloway family.

Where was Durham's sewage

Where was Durham's sewage discharged before the North Side WWTP opened?

It is astonishing how

It is astonishing how *little* the lab has changed in 64 years.