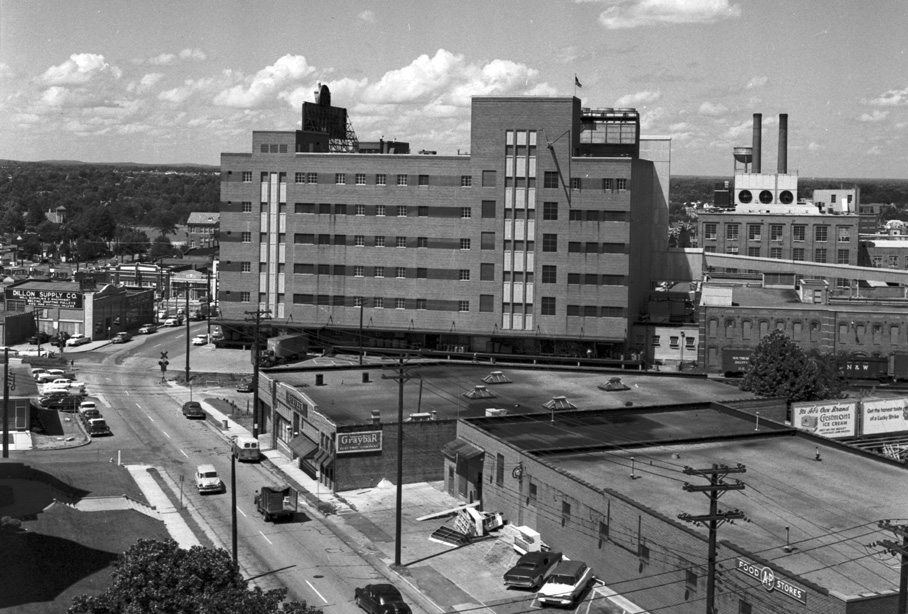 Where the immense Chesterfield Building sits as of 2011 was where Washington Duke made his home and began his in-town tobacco production operation. 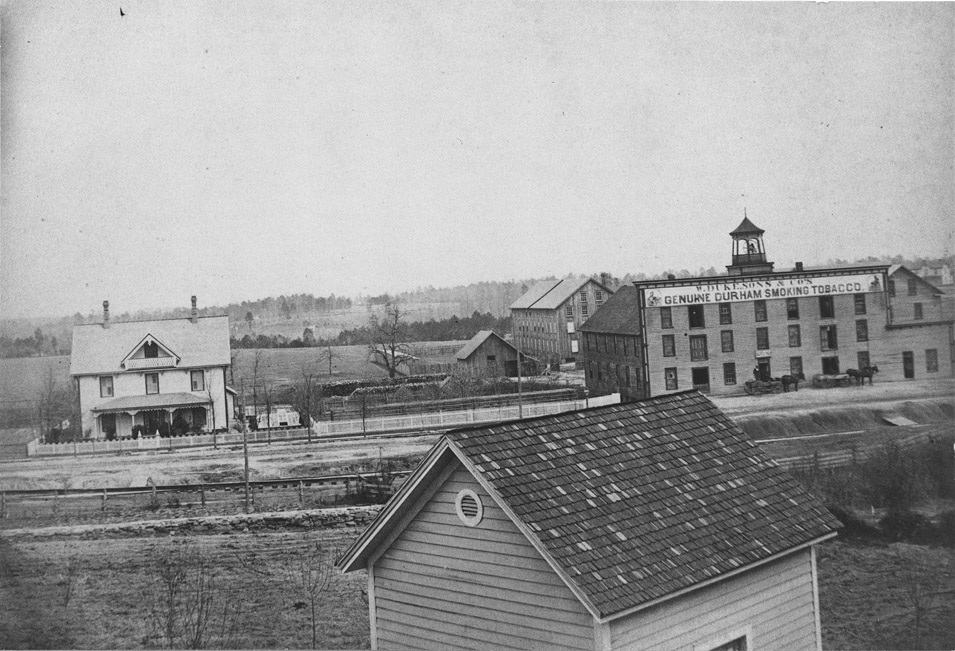 In 1884, Duke built a new brick factory, just to the east of his house and original factory. In 1888, he built a new house, which he called Fairview. 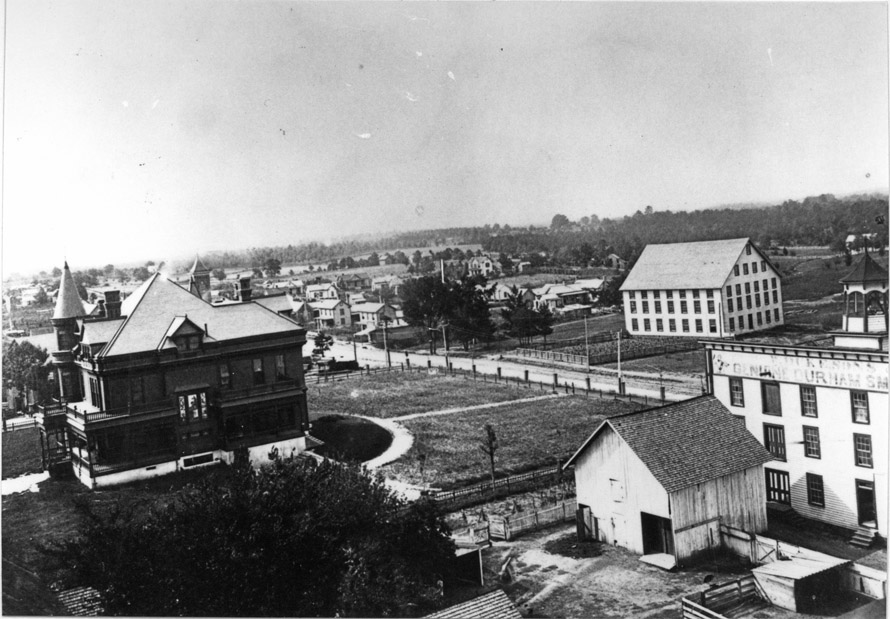 Looking west, with the old factory building to the right. The steeple of Main Street Methodist Church is just visible above the roof of Fairview.
(Courtesy Durham County Library)

And soon after, his new factory. 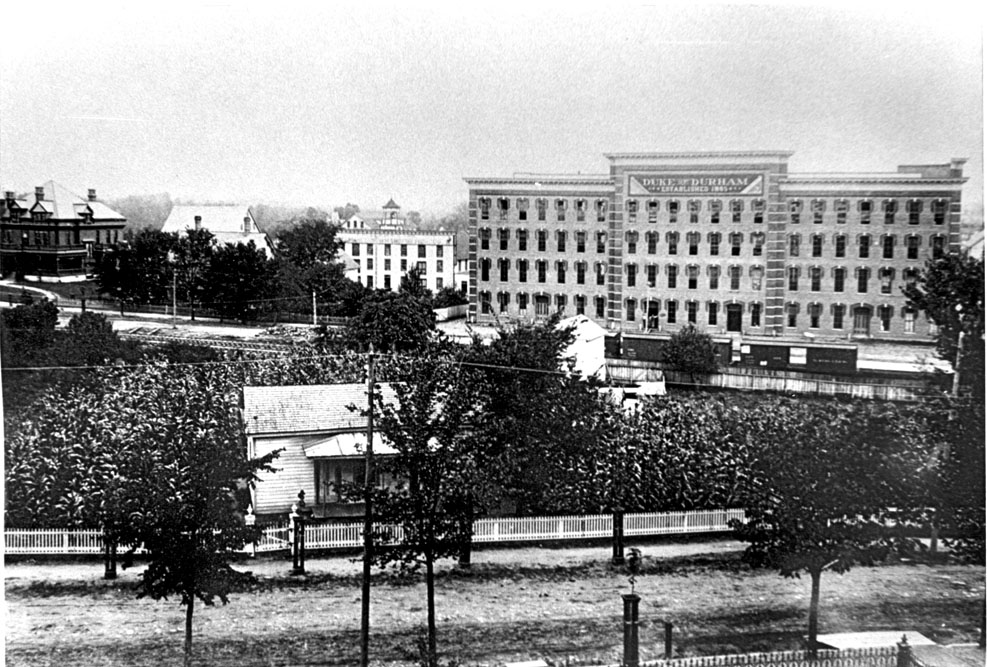 The view from the Southgate Jones property, looking northwest at Fairview, the old house, the old factory, and the new factory.
(Courtesy Duke Archives)

Soon thereafter, the older house (and factory) were torn down. 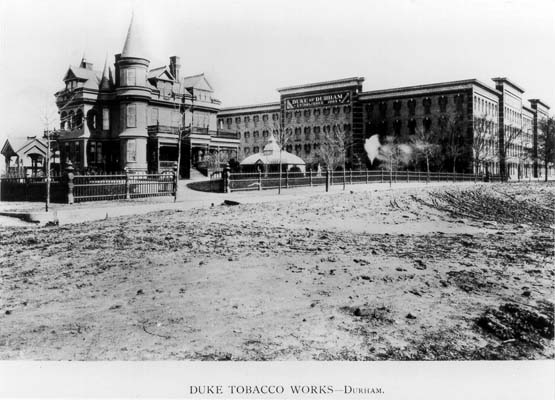 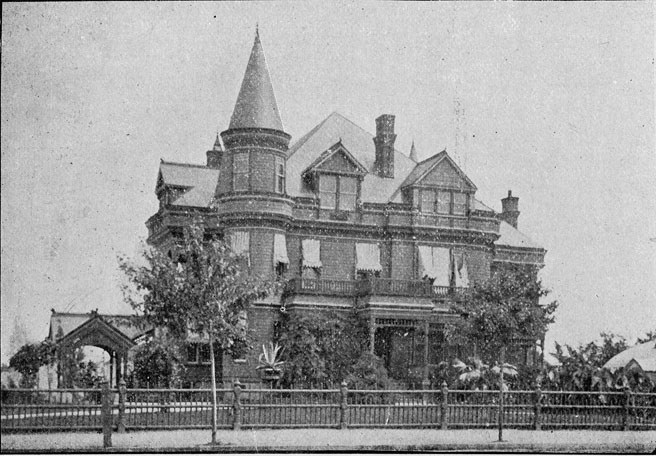 And a closer view of the house, from Peabody looking north. 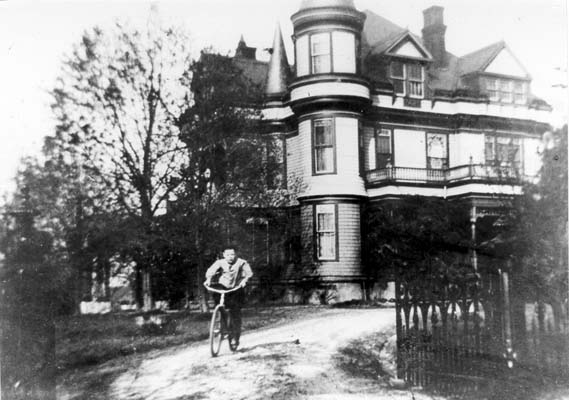 Sometime in the early 20th century, Fairview was torn down, and the L&M offices were built on site. This view is looking southeast, with the offices in the one story building to the right. 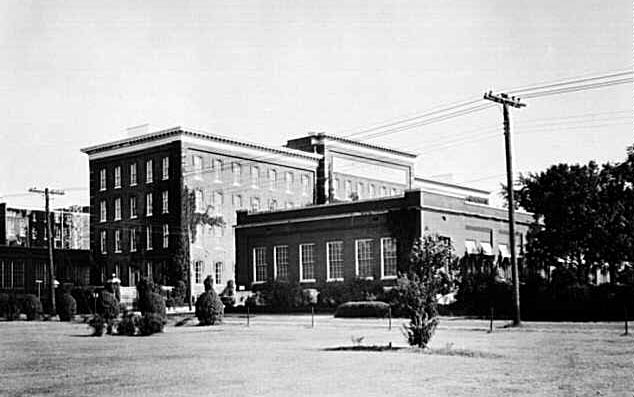 This aerial shot shows the offices just to the west (left edge of frame) of the main factory building. 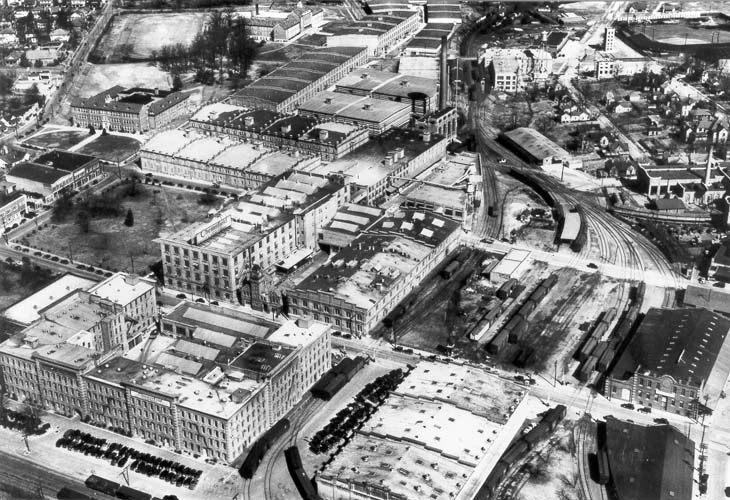 Before construction of the New Cigarette Factory, L&M moved the office building across Main Street. 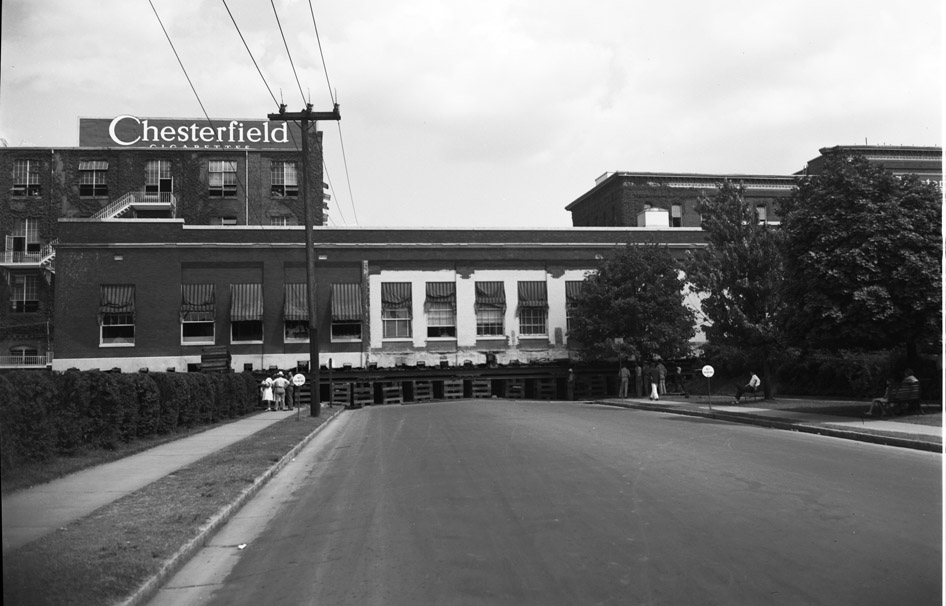 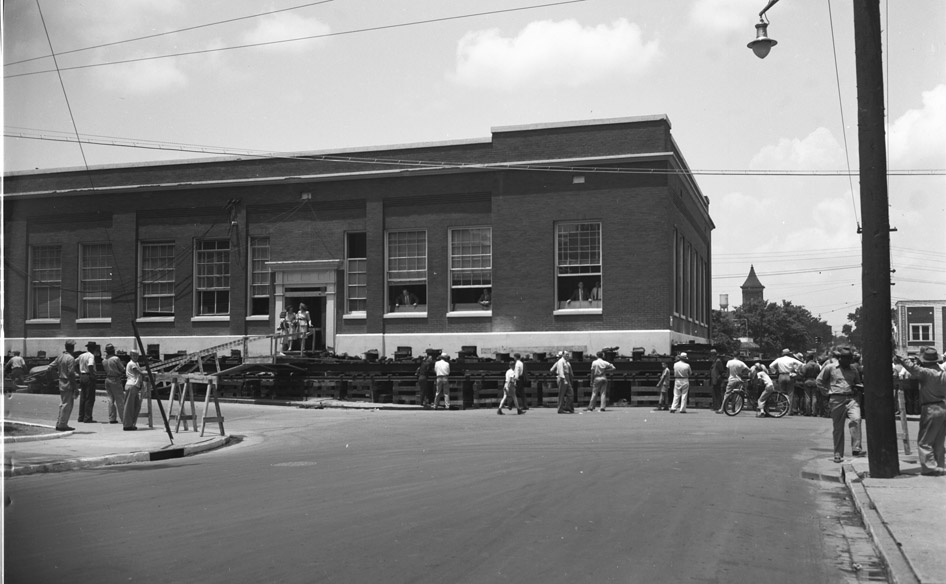 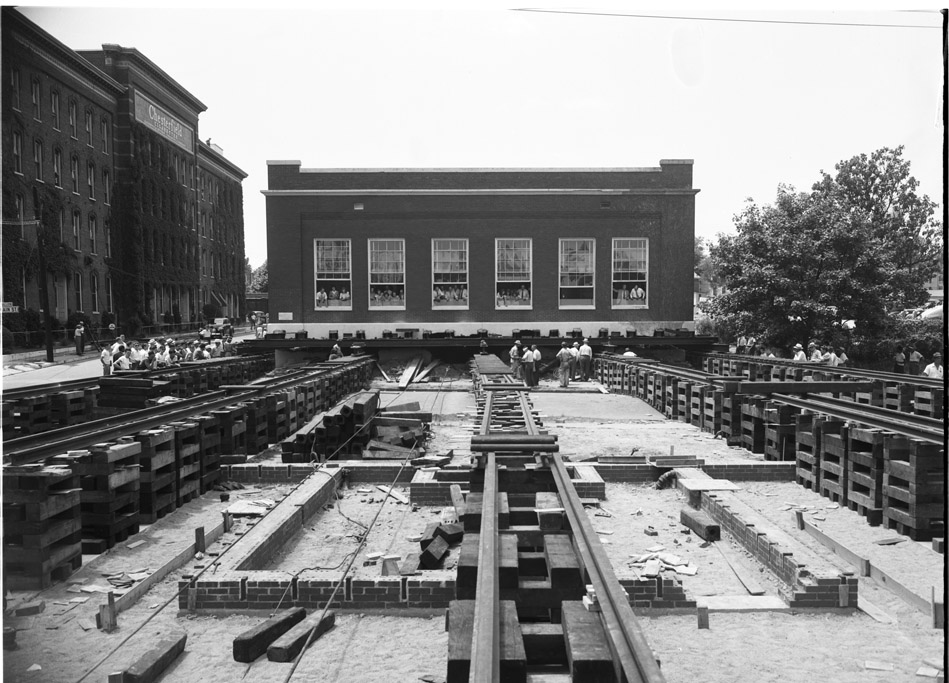 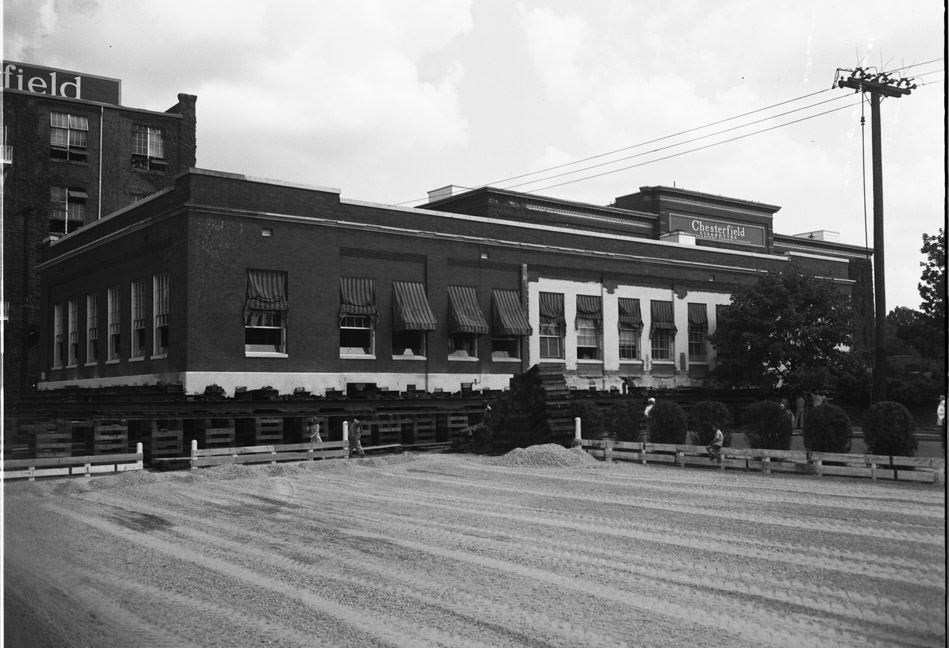 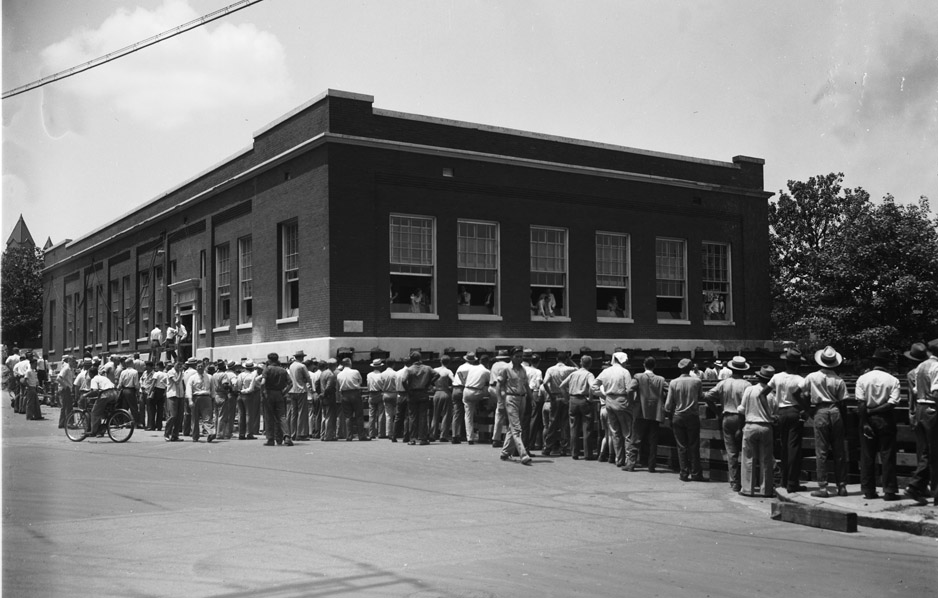 For a brief period, the future site of the New Cigarette Factory served as a parking lot. 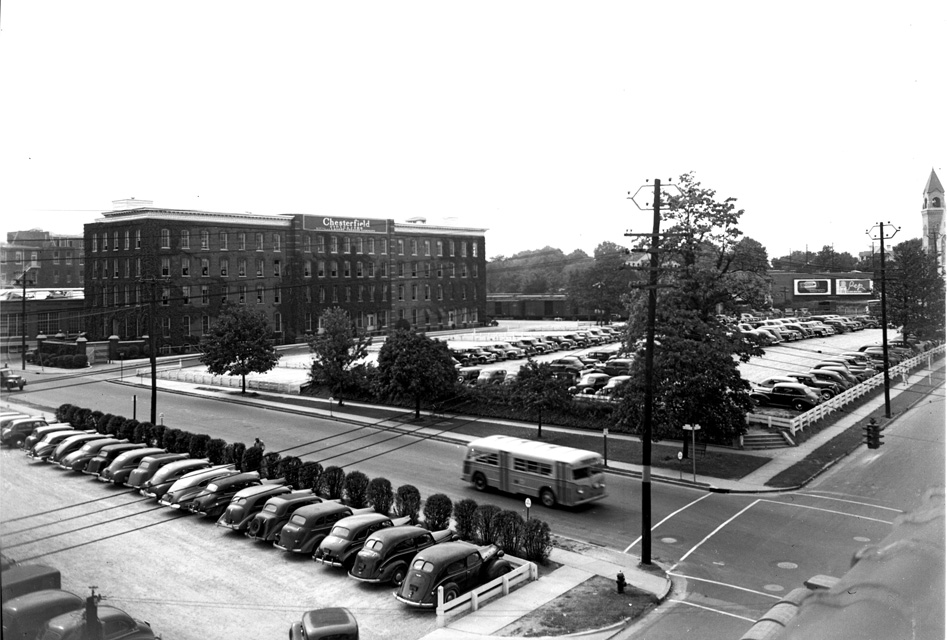 Shot from the Durham Ice Cream company building, looking southeast towards the intersection of Duke and Main Streets. The former entry stair to Fairview is visible at the corner - 1947.
(Courtesy The Herald-Sun Newspaper) 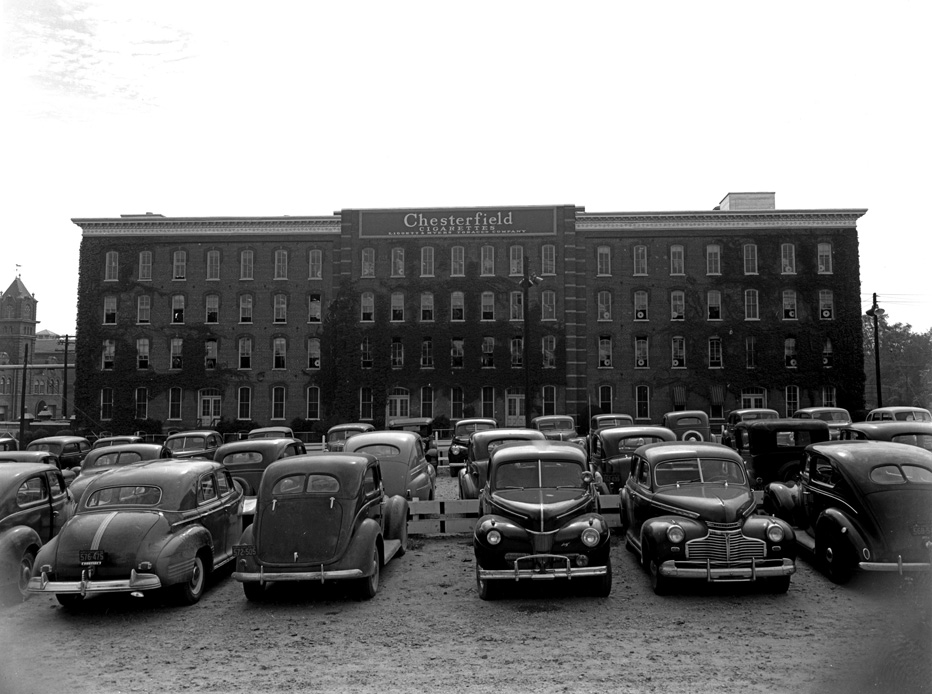 The Old Cigarette Factory from the site/parking lot, prior to decapitation - looking east - 1947.
(Courtesy The Herald-Sun Newspaper)

Ground was then broken on the New Cigarette Factory; the office building is visible on the other (north) side of West Main St. 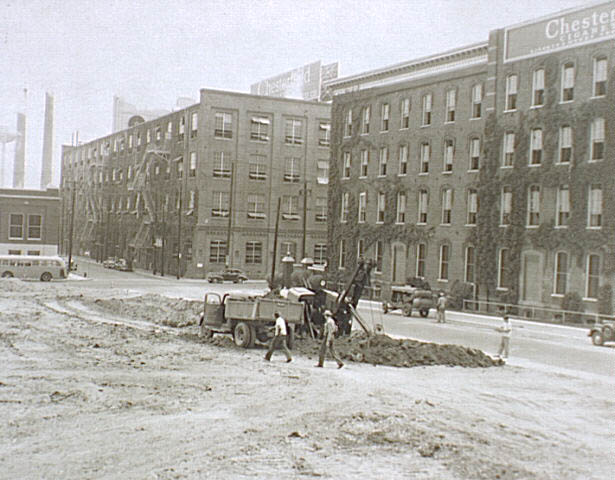 A view of the building under construction. The current Brightleaf area is in the background, with Main Street Methodist Church and other businesses in view on the site of the Brightleaf parking lot. 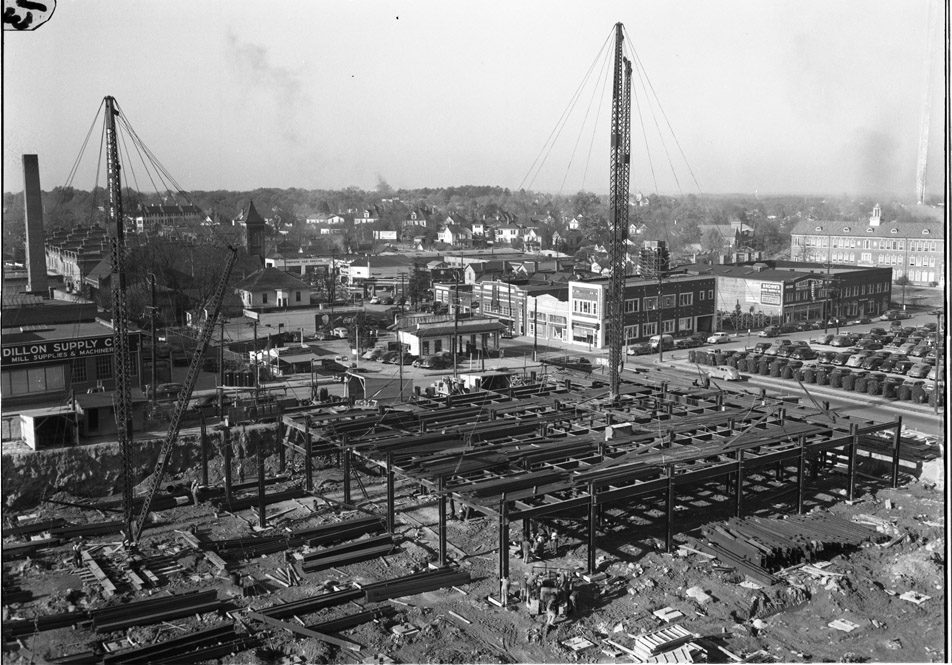 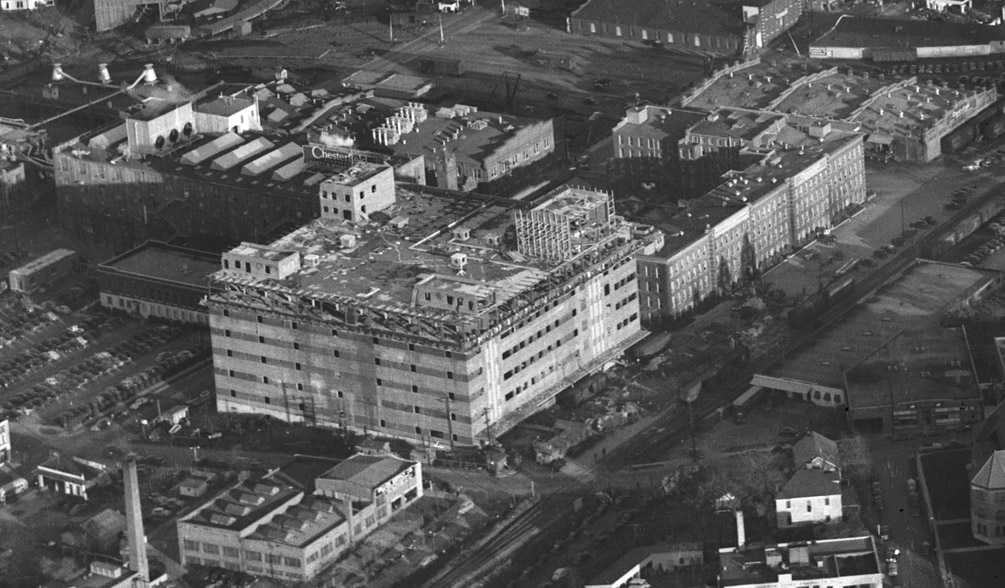 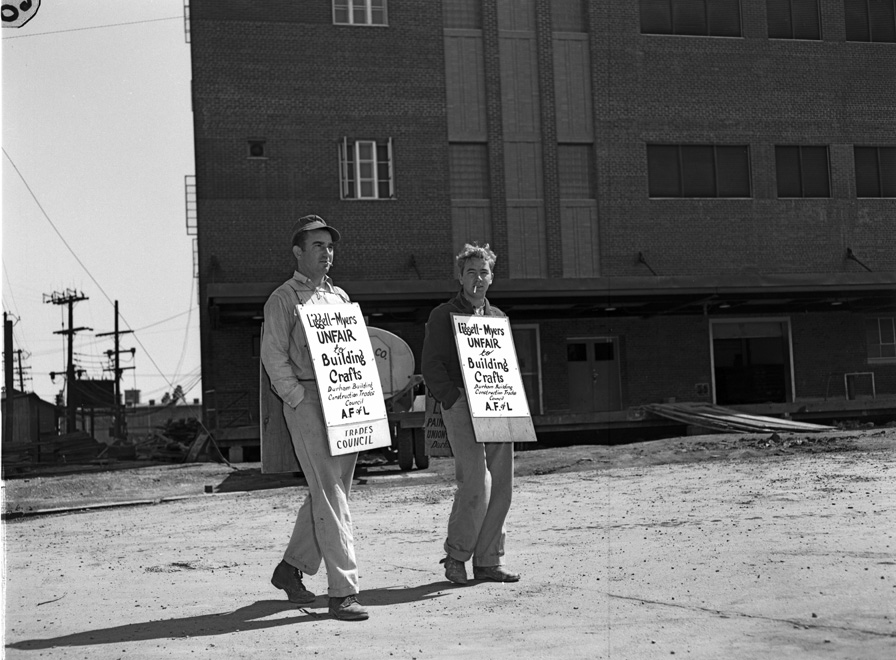 Strike at the construction of the New Cigarette Factory, 05.18.49
(Courtesy Herald-Sun) 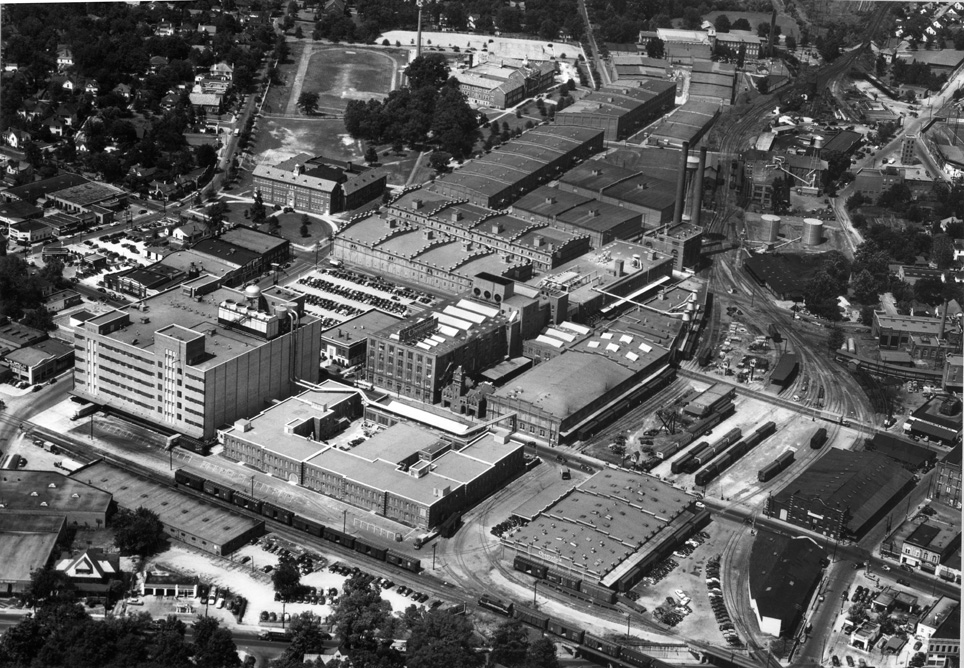 An aerial view of the building for a postcard, looking southeast. 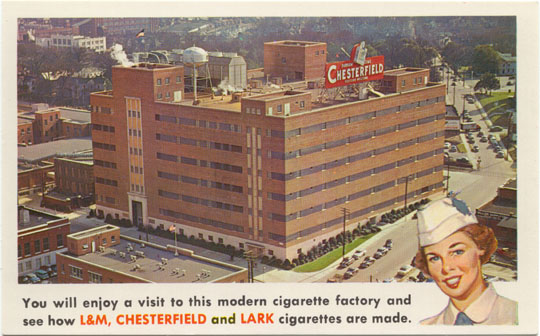 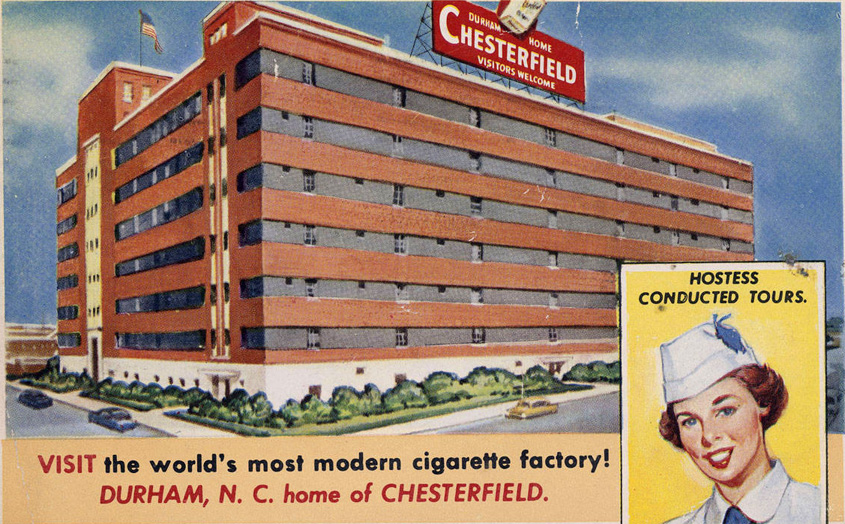 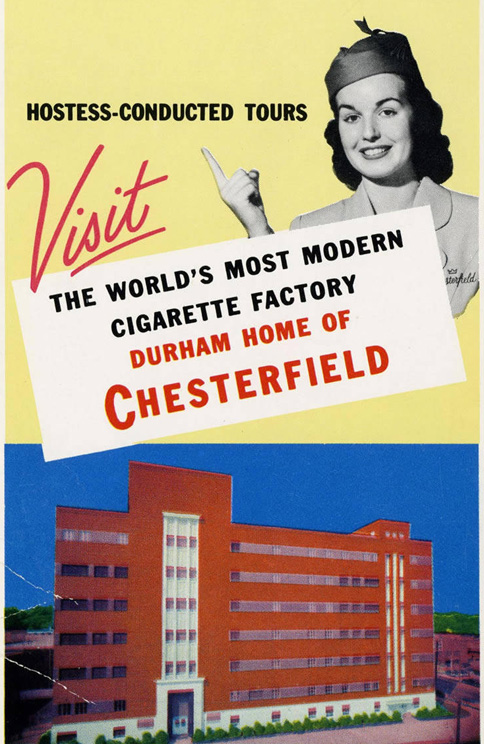 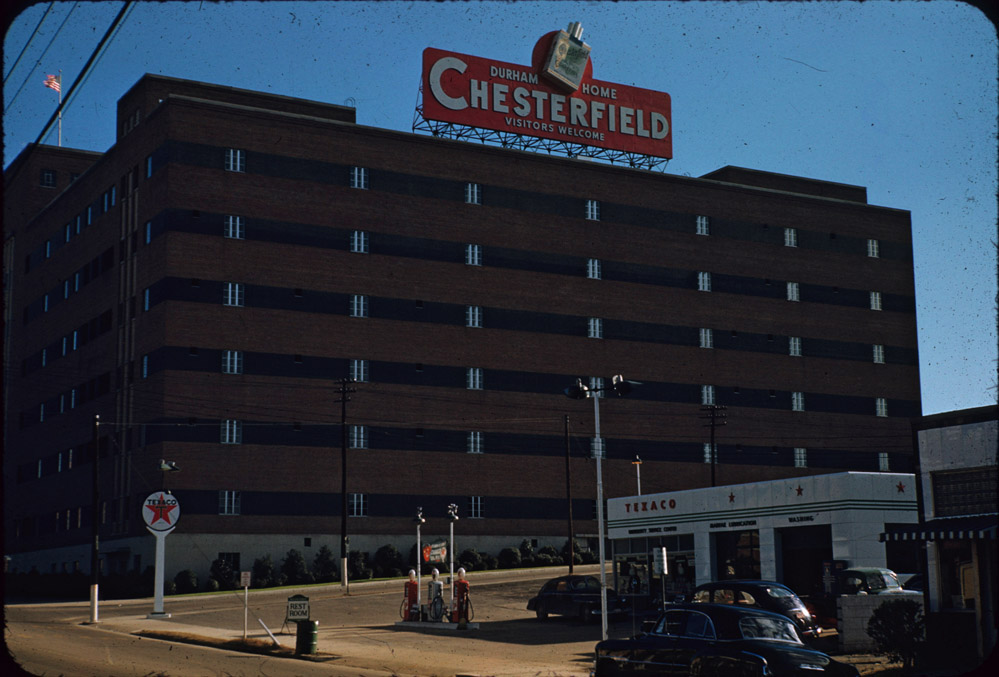 Production of cigarettes dwindled towards the end of the 20th century. I'm not sure when production actually ceased at the New Cigarette Factory, but it was fairly moribund by the 1990s, and Liggett left for good in 2000. 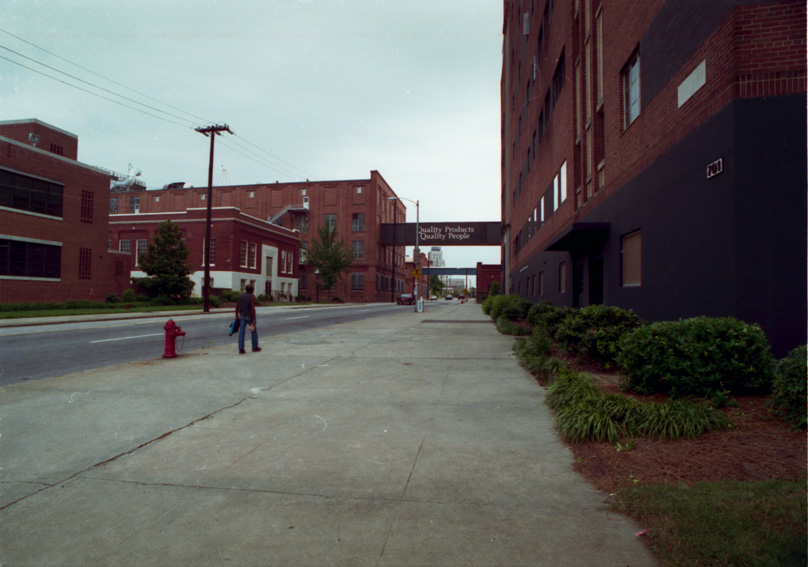 While the building has, to my aesthetic, a certain brutal and unforgiving utilitarian bulk, this was somehow mitigated by the iconic Chesterfield sign that sat atop the building, facing west. The bright red sign with three-dimensional cigarette pack, welcoming visitors, went a long way to cheering the face of the dour structure. Unfortunately, this was replaced in the mid-1980s with the corporate and utterly soulless black billboard with the Liggett and Myers name and logo.

The building, looking southeast from Duke and Main Streets, Fall 2006 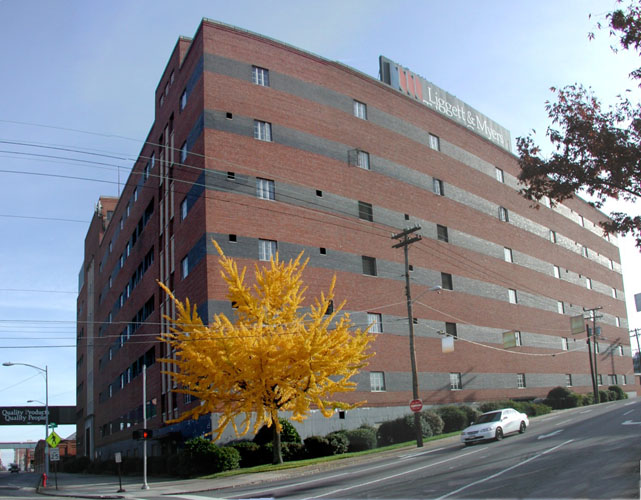 The fate of this building was in the balance for awhile, but the Blue Devil Ventures folks decided to keep the building and develop it as residential space. The plan has been to cut a 'light shaft' down the center of the building to create a courtyard/open space in the center and open up some more window space on the sides. My understanding is that, in the 'divorce' between partners in Blue Devil Ventures, custody of the New Cigarette Factory (known to the partnership as 'West Village Phase III') went to now-former partner Tom Niemann. If they could put back the big red and white Chesterfield sign, I think that would be fantastic. 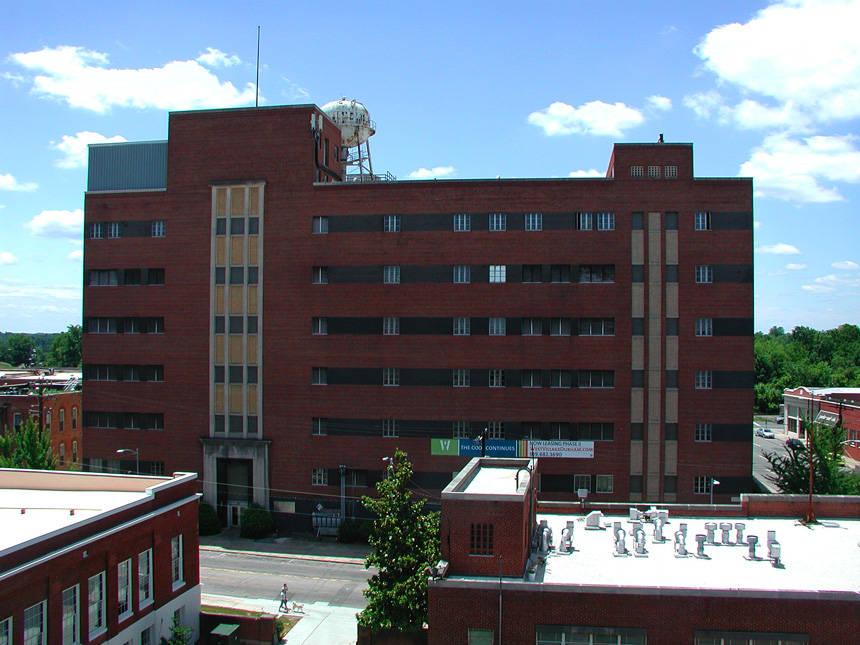