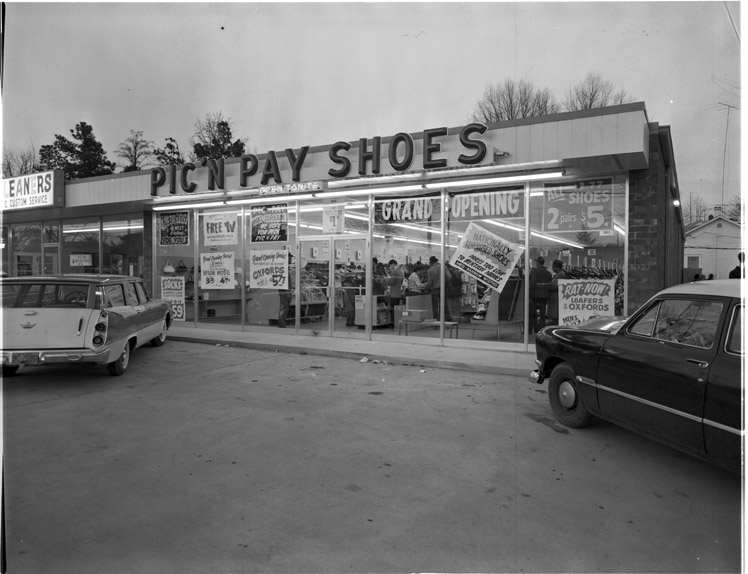 I think that's the Hog Heaven

I think that's the Hog Heaven building on Guess road.

Avondale Drive as previously stated, right across the street from McDonalds

I think that's Avondale, next

I think that's Avondale, next to the Quick-As-A-Wink cleaners. I have a vague childhood memory of a shoe store there.

Yep, absolutely Roxboro and Avondale. That's where my mother dragged us to buy school shoes in elementary school.

It is on Avondale at the

It is on Avondale at the corner of Edwards, across Avondale from McDonald's and across Edwards from Pizza Village.

The sign in the window reminds me of a shoe store slogan back in the Midwest, "Two for five, man alive."

My mother bought me some sneakers there. They lasted about a week and the soles fell off!

Lesson: you get what you pay for.

This looks like the one on Avondale where it comes together with Roxboro Rd. I remember going there.

Jamie, don't feel bad...I was thinking Hog Heaven when I first saw it too.

The 1963 City Directory confirms Pic N Pay shoes at 2202 Avondale Dr, right next door to Cougle's Fiesta Cleaners at 2204 Avondale. There is no listing in the 1962 Directory.

I believe that was a shoe

I believe that was a shoe store well into the 80's.

This is definitely across the

This is definitely across the street from the McDonald's on Avondale. I vividly remember going into Pic and Pay as a child and I was born in 1986 lol!

Yep, that's Don Cougle's Fiesta Cleaners next door to Pic n Pay. Mrs. Jones' Bragtown Nursery School was across the street where the now defunct Arby's Roast Beef used to be. Used to be mules in a fence behind this building. I went to the nursery school in the early '60's and we used to watch them out of the front windows.

Definitely Avondale Dr. across from McDonalds. I worked there after school my senior year of high school, fall of 1971 through June 1972.

Yes this was the Pic 'N Pay shoes on Avondale. My family use to

Yes this was the Pic 'N Pay shoes on Avondale. My family use to get my cousins and I nice shoes out of there.

This is on Avondale drive

This building that housed Pic

This building that housed Pic 'N Pay Shoes is located at the corner of Avondale Drive and Howard Street. The house just visible at the back right corner of the photo is 307 Howard St. My grandparents, William Roscoe Briley and Maude Jenkins Phillips Briley, acquired the lot on June 12, 1924 at a cost of $285.00 and occupied the home they built at a cost of $2600.00 around June 5, 1926. The move-in was timely since their third daughter, my mother, Peggy Maudean Briley (Bright), was born in the home, August 12, 1926. "Papa" was employed as an auto mechanic with Carpenter Chevrolet for many years and "Ma" worked with Liggett-Myers, retiring with over 40 years service. My grandmother moved from the home in 1987. To my knowledge, there were never any mules penned behind the Pic 'N Pay since there were homes along the entire north side of Howard Street. There was a horse stable, owned by "Pop Parrish", beyond the dead end of the street which was accessed, I think, by way of Club Boulevard. I also remember my mother talking about a polo field in the area when she was growing up. It was located across Avondale Drive.

I vaguely recall mules there,

I vaguely recall mules there, and as mentioned, a horse farm on land that later became KMart. The polo field was where Fowler's food store was beside Barnhill's Gulf at the corner of Club and Roxboro. The Fowler's building later become a pawn shop. During the holiday season, Christmas trees were sold on that adjacent lot that later became Hardees.

Yep. In the area of the old

Yep. In the area of the old KMart there was a stable. Rented horses there in the mid 60s. There was a trail thru the woods and a large open field. Can't remember the name.

This is now a hispanic-themed

This is now a hispanic-themed night club called La Movida. The coin laundry is still there, although it has a different name now.