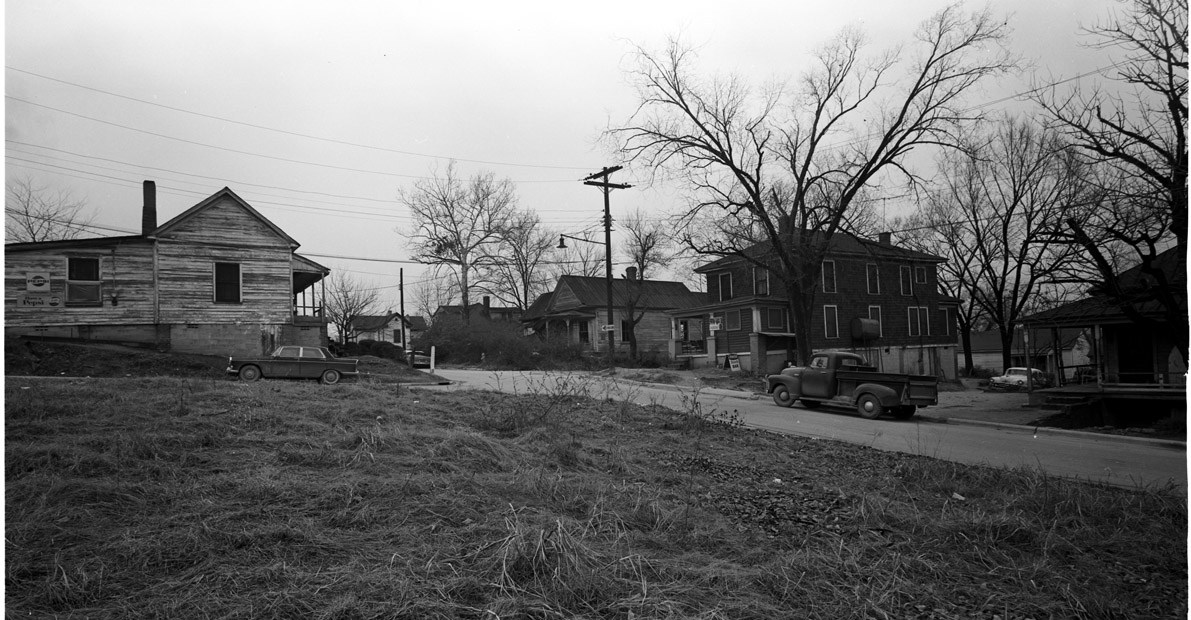 (For those who may wonder, I can't make out the street name on the obelisk, the signs on the houses say only "have a pepsi" (left) and "snack bar" (right).)

Here is the blow-up of the obelisk - I can't make it out, but perhaps someone out there can interpolate: 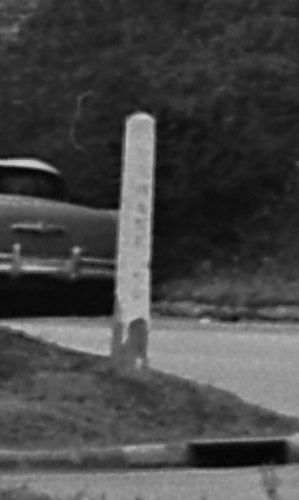 Looks like Gattis St. to me. I knew some twins that I went to elementary school with and that looks like their neighborhood to me. The West End.

I think it is North Durham,

I think it is North Durham, possibly Gray Avenue near Elizabeth Street.

Looks to me like it could be the southern end of Milton Avenue (now Buchanan Blvd.) where the freeway cut through the neighborhood.

I'm intrigued by the

I'm intrigued by the description of 'east-west expressway.' from your knowledge of these photos in general, Gary, do you think that's a reference to the future 147? or a road that was actually there? because the main east-west roads that have that era of architecture remaining on them are scant...

East-West Expressway was the original name for 147 / Durham Freeway. This photo would have been at a spot that was partially cleared or going to be cleared for the freeway - so areas around Gattis/Buchanan are possible, but not as likely, given that the Freeway wasn't extended north of West Chapel Hill St. for several years after its completion south/east of there. Gray/Elizabeth is not a possibility.

The I.L. Buck Dean Freeway, aka the Durham Freeway, the East West Freeway etc... ended at Erwin Road for nearly 20 years. It seems to me that this photo must be from an area between Alston Ave and Swift Ave in the path of the now NC 147?

It looks a little more rural than the blocks around Roxboro, Pine, McMannen, South...but does have the topography of the south side of 147 between Blackwell (South) and Mangum, now Forest Hills Heights? That area was densely developed with rather large homes like the one on the right.

Sad to think about all that incredible lumber just dumped and allowed to rot in the landfill. I do know that some of the bricks from homes demolished for urban renewal and 147 did make it into a couple contemporary homes in Hope Valley

My best guess: the tastefully

My best guess: the tastefully named Bacon St. at the intersection of Bowen, with the tail end of Mathison coming in from the right.

If not there, my guess would be somewhere in Hayti, although looking at your historic maps, I can't make anything look right with the street alignments and the topology. Maybe Elm St., but that's a stretch.

This is probably wrong, but

This is probably wrong, but this photo reminds me intensely of the stretch of Arnette Ave. just south of Chapel Hill St. (looking north) -- which would make the house on the left this one... which it obviously isn't.

FWIW: 147 ended at Chapel Hill Street when I first met it, which would have been pre-1973, and had not yet opened at that intersection as of 1967 (as I remember it; I'm sure you've got more specific details in various ED entries).

Any chance of getting a higher-rez scan so we have a hope of seeing the street name? It looks like it might be legible in the original, with a magnifying glass.

It does look hauntingly familiar, somehow, though I suppose that could just be from the ubiquity of the building styles so nicely featured in this photo.

The house on the left with

The house on the left with the Pepsi signs looks remarkably like the house at the corner of Arnette & Yancey with the house facing Arnette on Google Earth. The house is at the NW corner of the intersection. Topography looks very similar, but with additional fill at the side of the house.

My grandfather lived on Milton Avenue (now Buchanan Blvd) and had a neighborhood store in the area. This house (?store) would have been 2 and a half blocks from his house. I have been looking for the location of his store.

Has to eb a lone dissenter from the West End here.

Looking at the newly-posted

Looking at the newly-posted blow-up: hey, wow, that is pretty illegible, isn't it.

It does narrow things down just a bit, however: it looks pretty clearly like six letters plus "RD" or "ST". Also, none of the characters look narrow enough to be an "I" or "T" (except *possibly* the last of the 6), which rules out Gattis as the street being named (though it could be the cross-street).

The last 2 letters of the 6 look more like "NE" than anything else... but it could also almost be "YANCEY", which annoyingly points back to my largely-discredited Arnette theory. Feh.

OR "MAWSEY" -- any streets in Durham with a name anything like that?

Maybe I'll try to do a little image enhancement on it later.

When GK went through his

When GK went through his Hayti series, a RAMSEY ST. came up, and it was eliminated by the freeway. Would Ramsey fit the picture?

It looks to me like the present day intersection of Jackson St and Kent St. The large brick house on the right is still there today. It's hard to tell though, so many of those house look the same today.

The dark car in profile on

The dark car in profile on the left is a Peugot 404 almost certainly a 1966. There can’t have been many of them sold around there so maybe there’s a sale/ownership public records trail.

Being from the neighborhood, this photo was tak

Being from the neighborhood, this photo was taken on St. Joseph St. at Mebane St.  The camera man is in the lot where Smitty's store stood before it was torn down,  The house behind the white car is the last house on S. Elm St.  St. Joseph St. goes one way right to left and Mebane St. crosses.