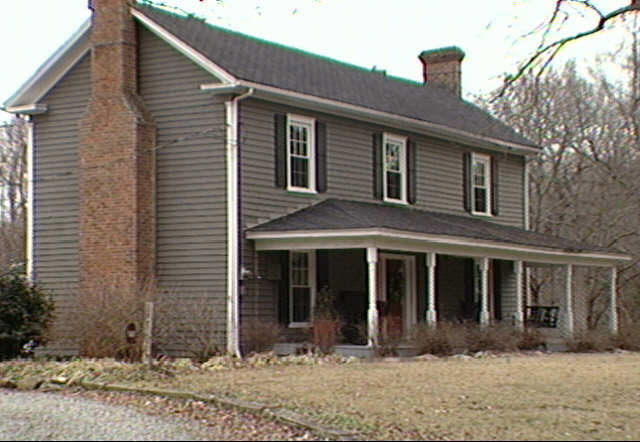 From the National Register Nomination for the house:

The Marcus Tilley house is an I-house, built about 1880, over an earlier one-and-a-half-story log house with a one-and-a-half-story rear shed. The house and surrounding outbuildings stand as the centerpiece of the 13.63 acre home tract ofthe Marcus Tilley Farm, adjacent to Lake Michie in the northeast section of Durham County. The property, located about two miles southeast ofthe village of Bahama, is approached by a long unpaved driveway connected with Jock Road (State Road 1625). A row of peach trees and large pecan trees stand east of the driveway, and the eastern boundary ofthe home tract is a spring branch lined with hardwoods. The front ofthe house is shaded by large oak and evergreen trees. A wood and barbed-wire fence runs along the east side of the drive then curves northeastward to outline the front and side yards. A pasture at the rear ofthe house slopes down to the shore of Lake Michie, created in the 1930s by a dam on the Flat River, which earlier had formed the northeast boundary of the farm.

Hidden inside the right (east) bay of the house is the original one-and-a-half-story log section. Below this section is a root cellar with a rock floor, brick walls, a small brick fireplace that may have helped to keep vegetables dry, and outside entrance on the east gable end . The main log room is entered through a wide, short batten door and has a lower floor level. The room features wide plain trim, heart pine wood floors, wide window sills, and an original large brick fireplace with a Federal style mantel consisting of a flat rectangular panel with a molded cornice. The upstairs log room also has a floor level lower than that of the rest of the house. Original features here include a batten door and wide horizontal sheathing on the walls. The Greek Revival style mantel with curvilinear frieze was probably installed when the house was enlarged. The original log rear shed section does not retain any visible early fabric.

The main block of the house is a frame, two-story, side gable, single-pile, three-bay wide dwelling with a wide center hall and flanking rooms (Figures 1 and 2). Exterior features include wide eave returns, molded capped corner boards, and exterior end single-shouldered chimneys of one-to-five common bond with minor variations in banding and corbeling. Original weatherboard sheathes the exterior. Other features include an attached one-story hipped roof porch with turned supports and bead board ceiling and original front and rear entrances with wide doors with four raised panels flanked by sidelights. A one-story concrete block addition with flat roof is attached to the rear of the original log shed. 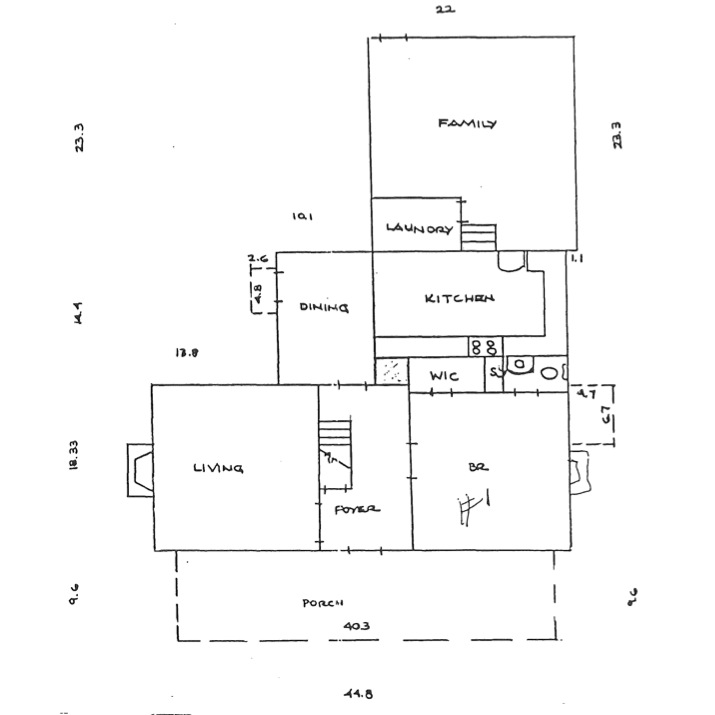 The only surviving historic outbuilding, a log smokehouse, stands behind the house. The half-dovetailed, hand-hewn log smokehouse has a projecting, front-gabled roof, a hinged batten door, and has lost its original chinking. Four noncontributing outbuildings stand to the rear and west side. A gabled spring house with concrete block walls, built about 1950, stands east ofthe house on the branch. A circa 1950 frame, four-bay vehicle shed, built from old lumber from nearby Camp Butner, has a side-gable roof, square posts, exposed rafters and a tin roof Behind this building is a 1970s tobacco/storage building built of corrugated metal. The frame well house with weatherboard siding and gable roofwas built in the 1970s. South ofthe vehicle shed stands a sizeable grape arbor.

Alterations were made to the house over time. The original one-story hipped roof porch with slender posts, visible in an old family photo (a copy is located in the nomination file) was replaced in the 1920s-30s with a wider, one- story hipped roof porch with square Doric posts. These posts were replaced with turned porch posts in recent years. All ofthe six-over-six sash windows are vinyl replacements added about 1990. Ceilings in most ofthe main rooms have acoustical tile. The back porch or breezeway which led from the rear entrance of the I-house to the detached kitchen (now demolished) was enclosed as a dining room in the early twentieth century, and a back shed porch attached to the log shed was enclosed. After the original kitchen was demolished, Adolphus Tilley built a concrete block family room on its site a.bout 1950. About the same time, Adolphus converted the rear log shed room, which had served as a bedroom, to the kitchen. An upstairs bathroom was added by converting the center window to a doorway and adding a small shed addition above the dining room (see Figs. 1-2).

The main block of the Marcus Tilley House retains sufficient integrity of materials and workmanship to meet the integrity threshold for National Register eligibility. Although windows and porch posts are replacements, all other exterior fabric is original or early, creating an overall historic character. The rear elevation, with its farge ca. 1950 one-story family room, has changed greatly from its ca. 1880 appearance; however the scale and materials ofthis addition characterize it as a distinctly mid-twentieth century phase of construction. Its location behind the house minimizes its disruption of the overall architectural integrity. On the interior, the Tilley House retains most of its original finish, both in the original log core and the I-house enlargement.

Remainder of the NR nomination.

The Tilley family farm is in an idyllic location overlooking Lake Michie. At the end of a long winding lane, the house is shaded by massive live oak trees. Between huge brick chimneys, the front porch beckons visitors to come in and be welcome. This is the oldest house on today's tour. The original part of the house including the main floor bedroom and kitchen and bedrooms above, is of log construction. The house has been expanded over the years by succeeding generations of the Tilley family. In the 1880s the central hall, a parlor, and an upstairs bedroom were added. In the mid 20th century, a porch was enclosed to create the dining room and a large family room was added at the back of the house. A bedroom was converted into the kitchen, and indoor plumbing and electricity were added at the same time. The family's love for this home is evident everywhere. Original mantles, wide pine board floors, and woodwork remain throughout the house. Although energy efficient modern windows have been installed, the original wooden windows have been carefully stored away. The bookcase in the living room is an early family piece made of boards up to an inch or more thick. Crocheted bedspreads and embroidery made by various family members are lovingly displayed in the rooms. The kitchen is a combination of old and new with an heirloom wooden dresser displaying family china beside newly tiled countertops. The family room was constructed of concrete block, but the interior is now lined with antique boards taken from a Durham tobacco warehouse. More family pieces are displayed here, including a dining table placed over the original well. Upstairs, the bedroom over the living room was the childhood room of the present owner. A wooden checkerboard and other heirlooms displayed here belonged to family members. Across the hall, the bedrooms are two steps down since the ceiling in the newer part of the house is much higher than that in the original cabin. The floor in this room is patched over the opening where the original staircase came up before the central hall was added. The larger bedroom is furnished with early 20th century pieces from the owner's mother-in-law. The cradle was used by her father as an infant. The small bedroom at the back is now a playroom for the owner's grandchildren. A built-in cupboard across one wall emphasizes the eccentric angles of this the oldest part of the house, where nothing is quite square. The window here gives a splendid view to the lake. Home to generations of the Tilley family, the Marcus Tilley House was listed on the National Register of Historic Places in 2000. Jan Hessling

The description for this home

The description for this home is not entirely accurate, nor is the picture particularly flattering. The house was originally built around 1800 as a two story, one room per story, log cabin. In the 1800s sometime, the log cabin was framed within the traditional farmhouse looking structure. Other modifications, restorations, etc. followed.

Ed - the description is the

Ed - the description is the National Register listing for the house, so some owners must have approved it at some point. It does reference an earlier log section, but they must have felt that the date of construction was uncertain enough to not pin it down.

Blame the picture on the Durham County tax assessor. I don't drive down long driveways onto private land for fear of getting shot. I'd love a better picture if you can get me one.