The neighborhood business district at the intersection of Cleveland, Mangum, and Corporation streets is known as "Little Five Points". It once served the communities of "North Durham" (now Old North Durham), Cleveland Street, and the neighborhoods extending west towards the old ballpark and east to Roxboro. 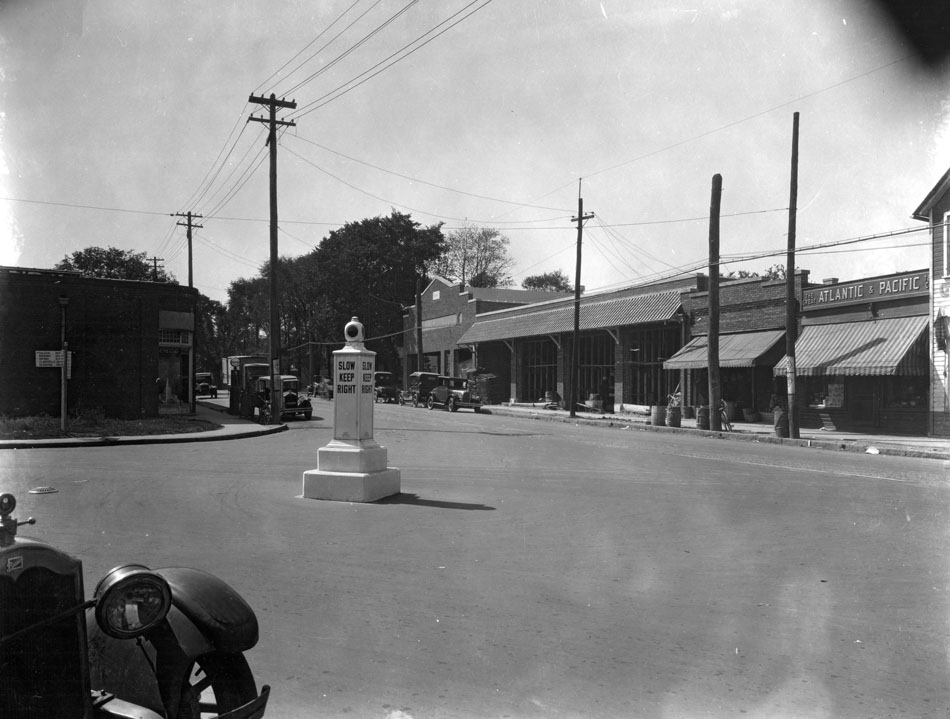 The 'Labor Temple' was added to the south end of the row of structures in the 1930s - I'm not sure, but I assume that it was a meeting place for organized labor. 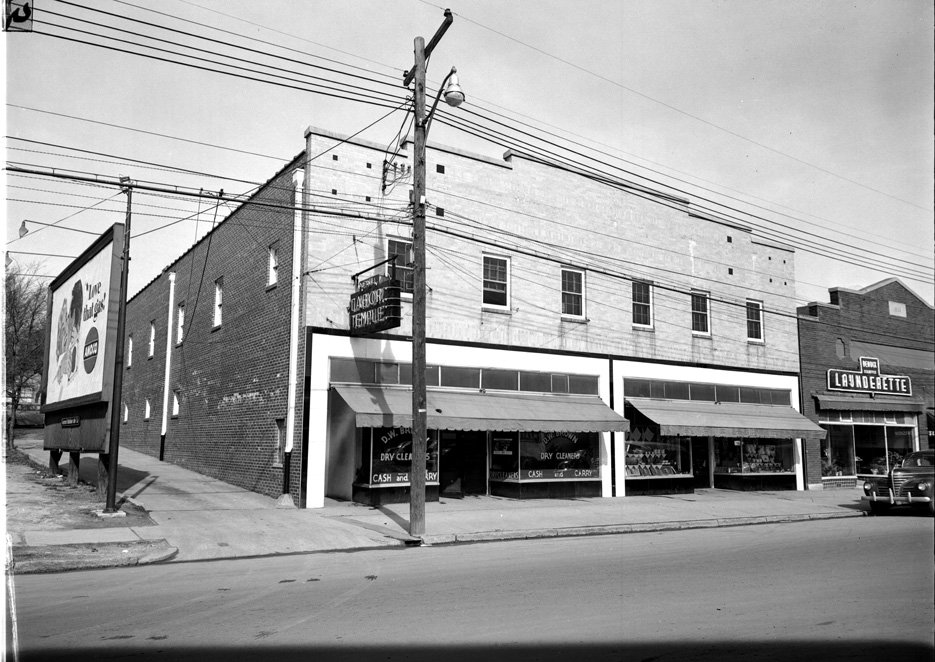 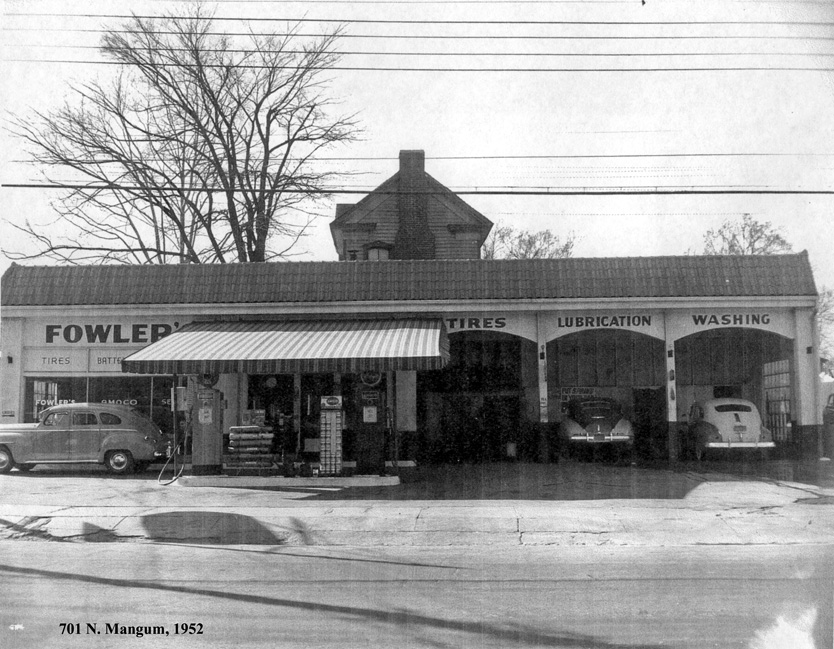 On the northeast 'point', which was the corner of N. Mangum and Haywood St. (later Corporation), another auto service company was established. 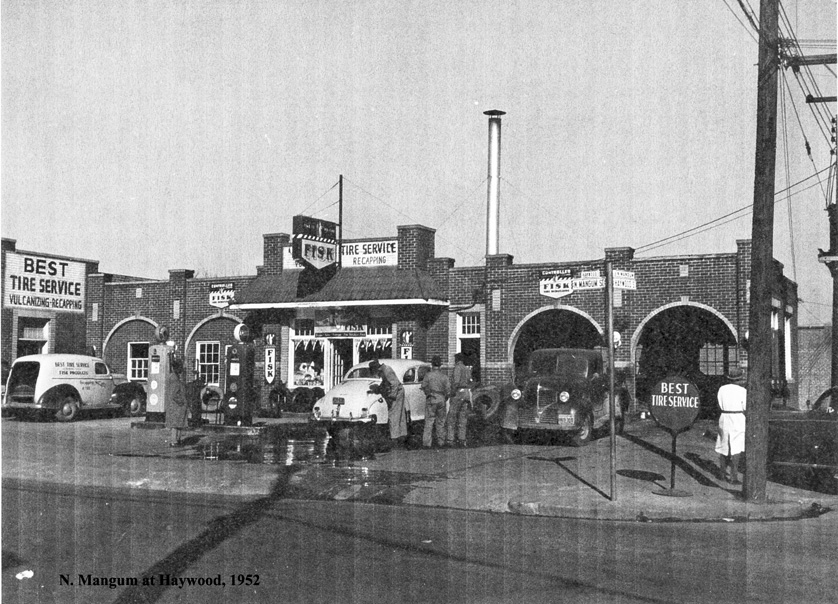 By the later 1950s, this would be converted to a dry cleaning business. 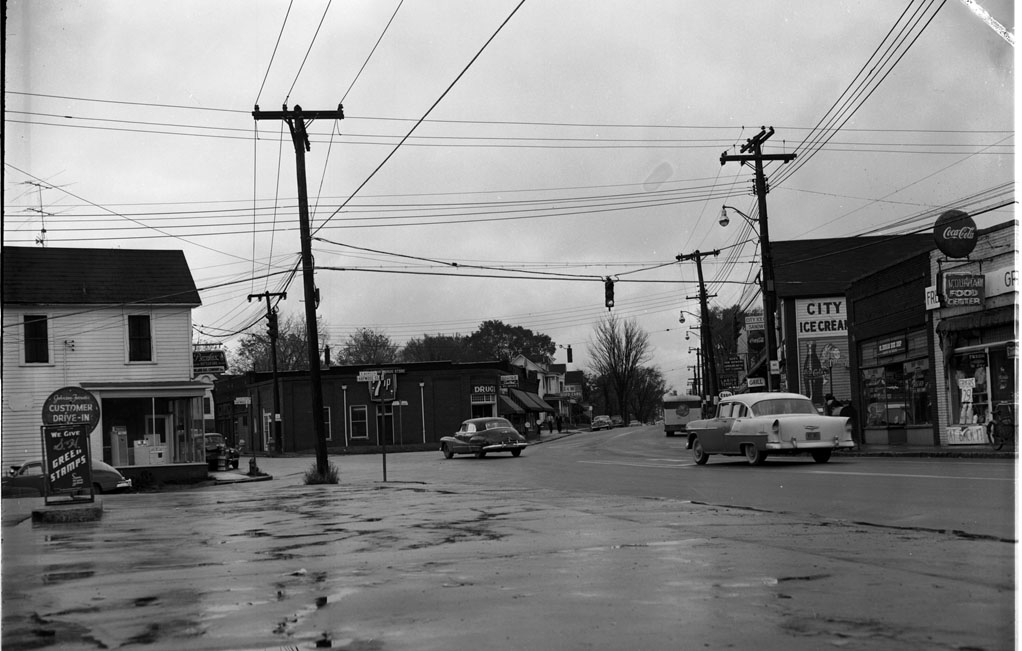 Looking south from in front of the dry cleaners, November 1956.
(Courtesy Herald-Sun) 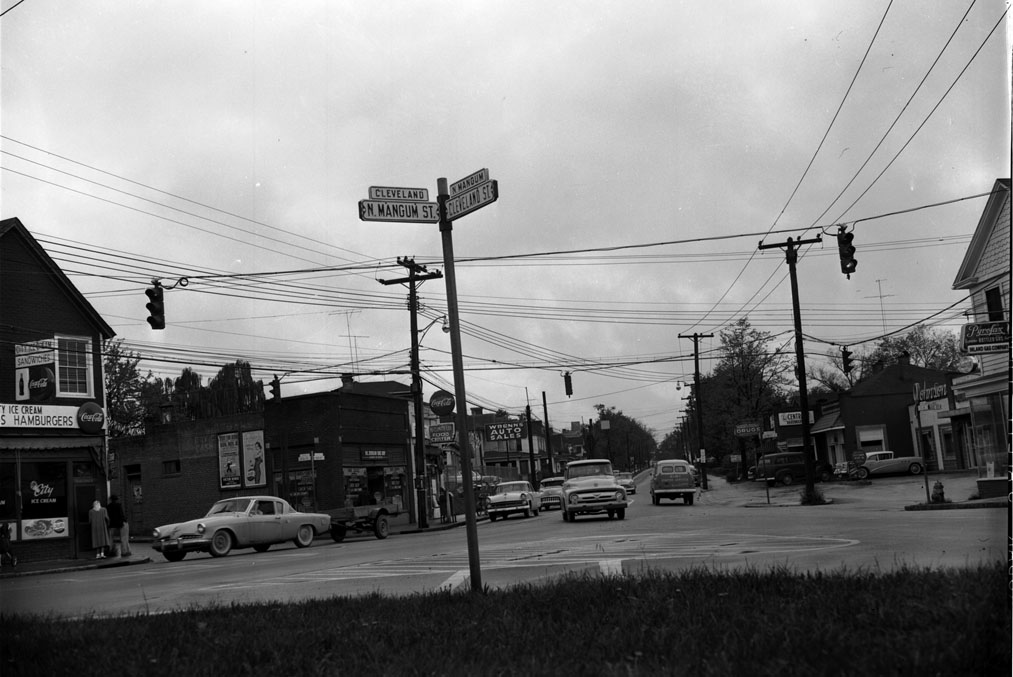 Like similar relatively well-preserved neighborhood business districts on West Chapel Hill Street and at the Angier/Driver intersection, Little Five Points has struggled in recent decades, and is similarly threatened. Only the West Durham business district (known as 9th Street) has managed to thrive.

Because of a convenience store, loitering, and crime, Little Five Points is seen as a nuisance by neighbors - particularly some members of the now 'up on its heels' Old North Durham neighborhood. A perusal of crime statistics by location simply does not bear out that this intersection is more prone to crime than the remainder of the neighborhood.

Unfortunately, the response to pressure about crime and loitering is similar throughout the city - tear down the buildings next to the people who might be committing crimes and loitering. The buildings that are in the worst shape at Little Five Points (the two at the far right in the present-day picture) are owned by James "Fireball" White, who has appeared here previously (August 1st). Housing and Community Development has intended to proceed with demolition of his buildings at Little Five Points. The City owns the building next to these two.

The existing buildings at Little Five Points are not only an irreplaceable part of Durham's history, but possess the best design configuration to support a walkable, vibrant neighborhood commercial district in the future - the kind people are trying to recreate in New Urbanist communities (like Southern Village in Chapel Hill). The primary difference between Ninth Street and Little Five Points is not the quality of the buildings, but the median income of its neighbors. Tearing down these buildings will not help change the economics of this community, nor will it change criminal behavior.

It Is Easy to blame a

It Is Easy to blame a building, but a Big Mistake. These are charming store fronts with great character and history. The people wanting to demolish should pressure the owner to sell or finally utilize the space. Use of these buildings by businesses, restaurants, and artists would help expand the Old North Durham community inward towards downtown again. Anybody want to take it on?

right i agree. Obviously the

right i agree. Obviously the art and spirit of Little 5 must not be destroyed. Maybe painting over old paint of the buildings isnt enough to restore the buildings. Perhaps a good cleanse of all the trash laying around will reduce some negative or illegal behavior.

I grew up in North Durham..

I grew up in North Durham...at one time lived on Cleveland St.  The "City Ice Cream" business on the corner was run by my Uncle. Had Great sliced pork sandwiches! Great memories!