Originally the Hall-Wynne funeral home, this 1900s building was a bowling alley before becoming Penny Furniture for many years. 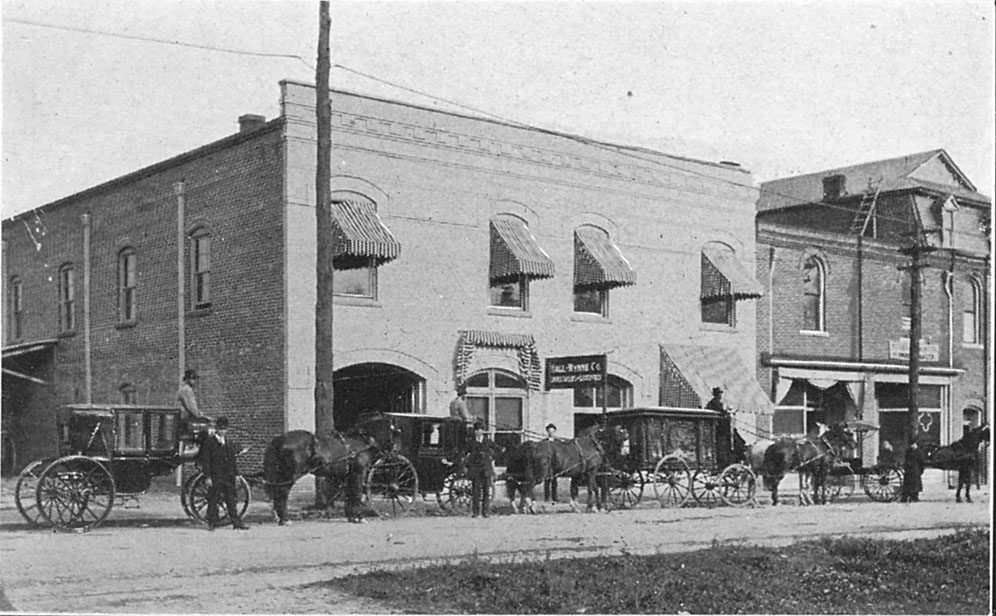 The above building was built between 1907 and 1910, likely in 1909. It was the original location of the Hall-Wynne (and White, originally) funeral home, which was established in 1901. The building is L-shaped, with another facade facing on East Chapel Hill St. (in tomorrow's post). It appears that this part of the structure housed the offices and 'undertaking rooms', and the carriages/stables (to pull the hearses) were housed at the rear. These may have exited on Chapel Hill St., but it's unclear. 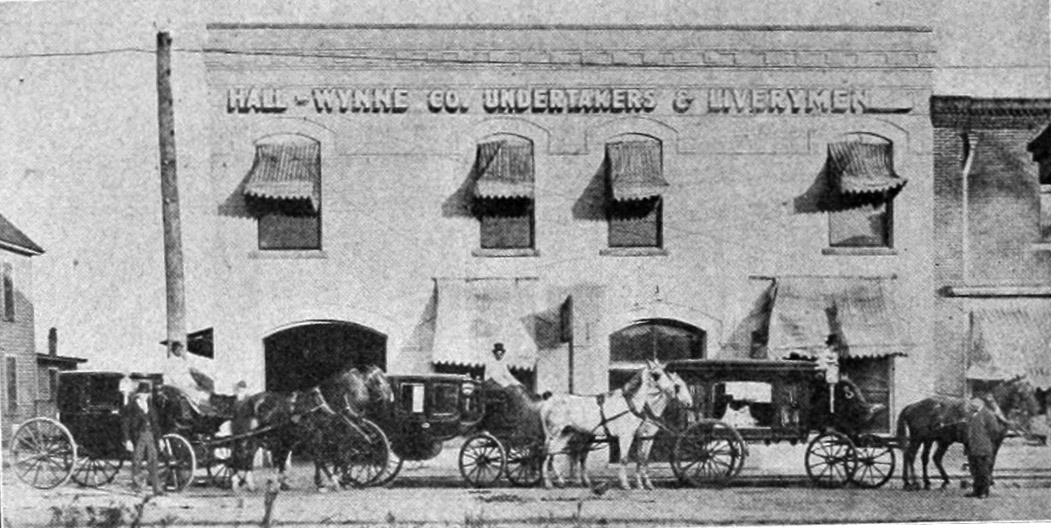 Hall-Wynne moved out to West Main St., across from McPherson Hospital in 1926, where they remain.

By the 1940s, this building had become the "Durham Bowling Alley" - seen below during a protest march on City Hall (next door) by striking city workers. 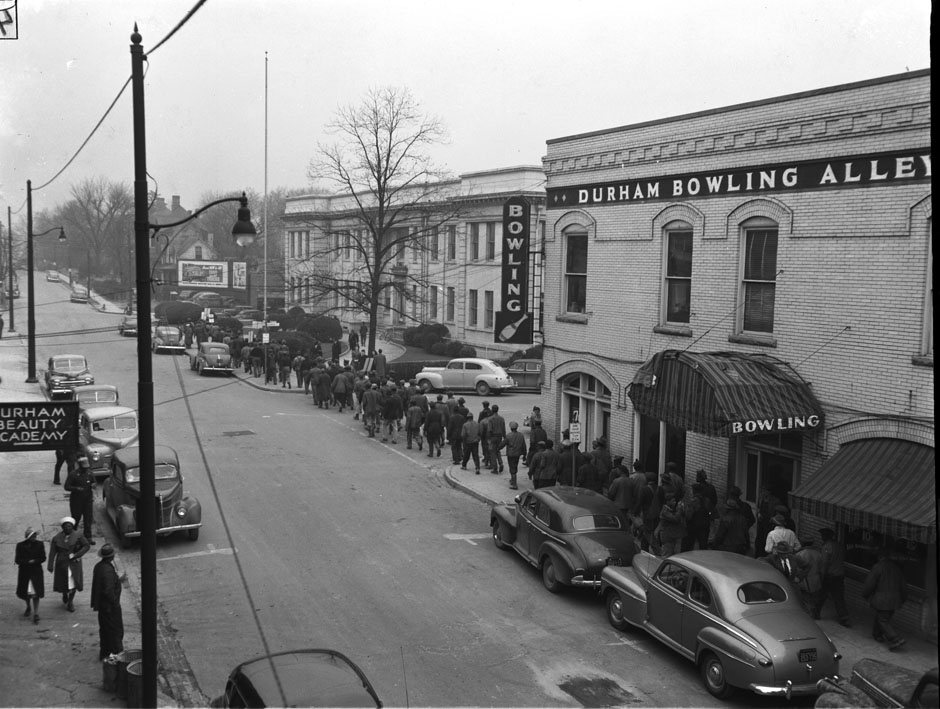 The building can be seen at a distance in the shot below, which I find fascinating for a couple of reasons: 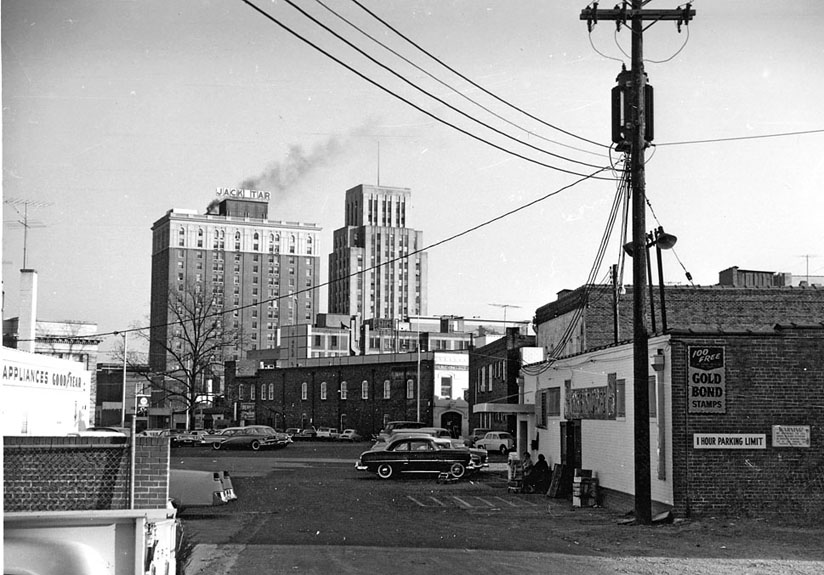 One, it's an impossible shot to recreate today, because it's taken from a spot that is now in the middle of the SouthBank building. Two, the shot captures the back of the Colonial Stores building that faced West Main St., and offered "Gold Bond Stamps". I remember Green Stamps when I was growing up - I guess this was something similar one received with purchases and could redeem for goodies. Third, I think it is a very cool picture of the Washington Duke Hotel, which had been rechristened "The Jack Tar Hotel" at the time this picture was taken in 1963.

By the mid 1960s, the modernization was underway. 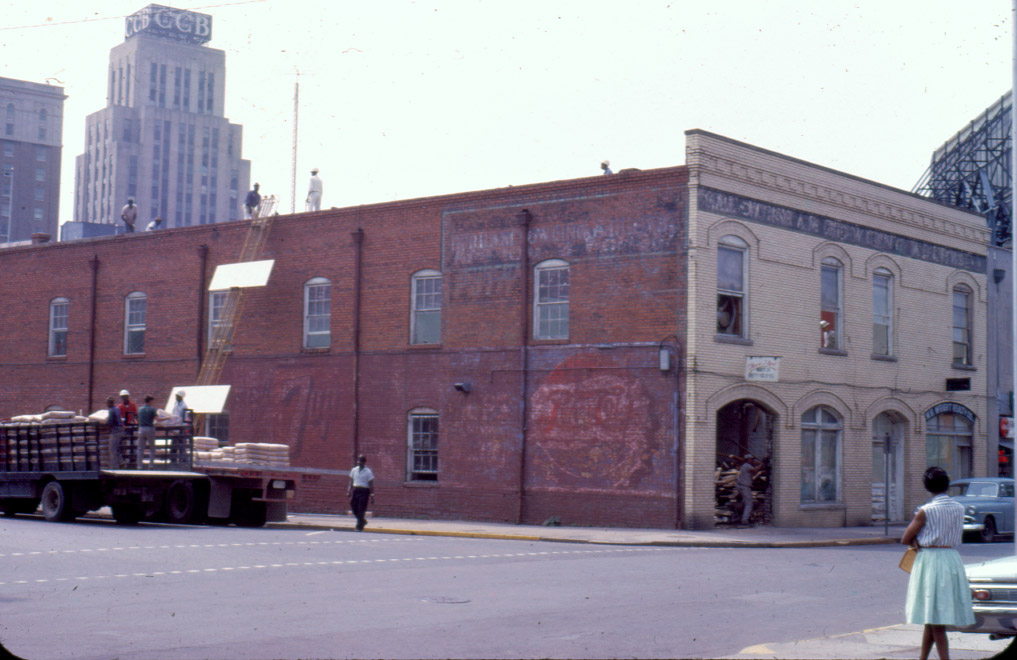 The original first floor entrance was eliminated, the second-story windows were bricked up, and the facade was painted a uniform color to hide any of that offending detail/protrusion. 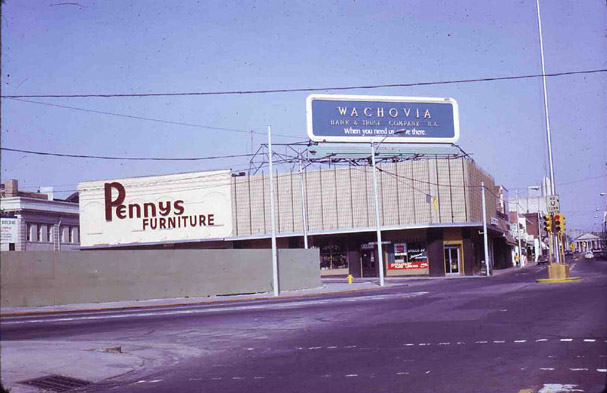 The building was renovated in ~2002-2003 into "The Edge" nightclub. I was glad to see the building renovated, but I would have preferred to see the second story windows re-opened, and I didn't/don't care for the blank silver wall that faces the sidewalk, just inside the building on the first floor.

"The Edge" lasted at least a year or two - maybe more, before being replaced by Blayloc. I liked Blayloc, but it seemed to be a study in the difficulty of space in a restaurant/bar. How much is enough and how much is too much? The space, in this case, seemed much too big - which really diffused any convivial atmosphere. I've never run a restaurant/bar, though, so I would imagine that it is difficult to find the balance between enough space to accommodate more patrons and not so much space as to feel empty.

I think this building has great potential, though. As with all the buildings in the Morris/Morgan/Main/Great Jones area, it is dominated by the SouthBank building, which creates a difficult to manage space on a larger scale. 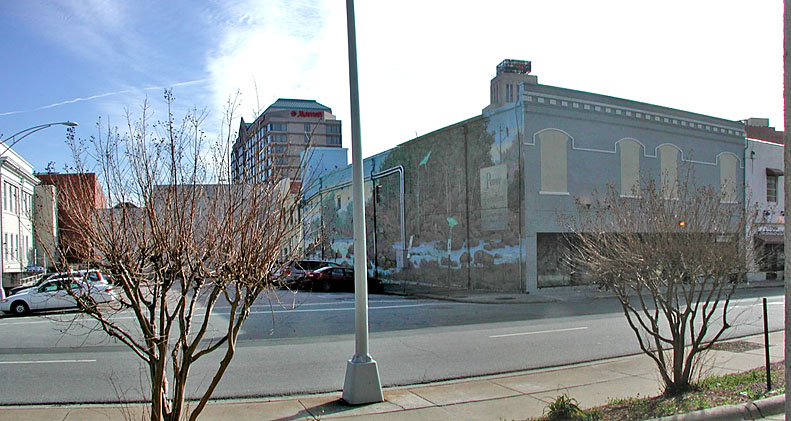 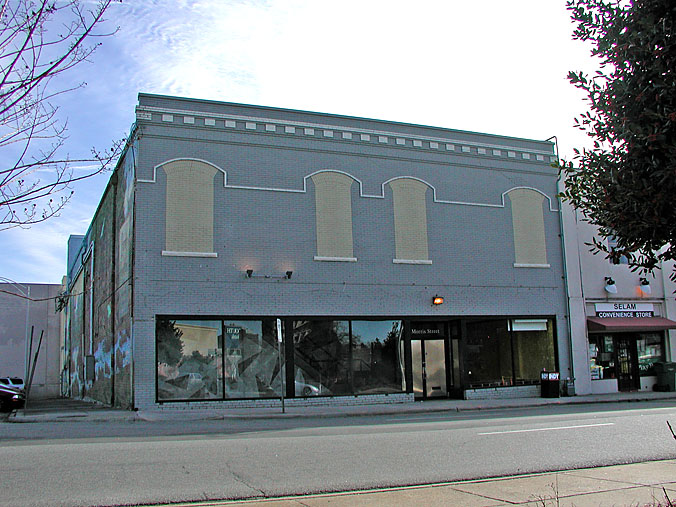 As of 2010-2011, plans have been percolating for Greenfire Development to sell this property to Wilmington-based developer John Fife. Rumor on the street has been that the restaurant would be another Giorgio Bakatsias affair, the much-ado the Durham Magazine made over a year ago about him opening something in West Village being, apparently, about nothing. Part of the larger renovation plan would include making Morris St. from Morgan to Manning Place two way, with a roundabout at that intersection; the section between Manning Place and Five Points would remain one-way, north. Two-way for the entire stretch is an NCDOT no-no.

It's a bit clumsy, but I understand the impetus, and I think some two-way in here is better than none. The hope would be that, at some point, the two-way-ing of the whole stretch is deemed viable. Particularly with a two-way Morgan Street, which I would be particularly thrilled to have. 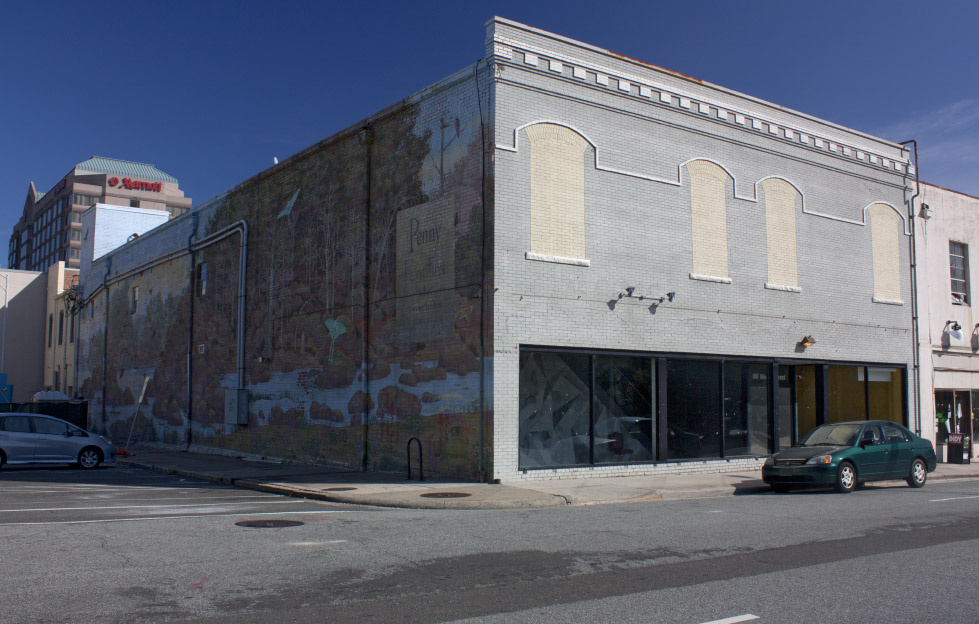 As of mid 2012, this deal seems to have gone dark, while everything around it is burgeoning. There's been no further word about the plans to renovate the building.

As of March 2014, it was announced that the Caktus Group, a tech company, had purchased the building and planned to renovate it for their offices - to be located on the second floor - and a retail space to be located on the first floor. It's like an itch finally being scratched to see the windows being un-bricked. 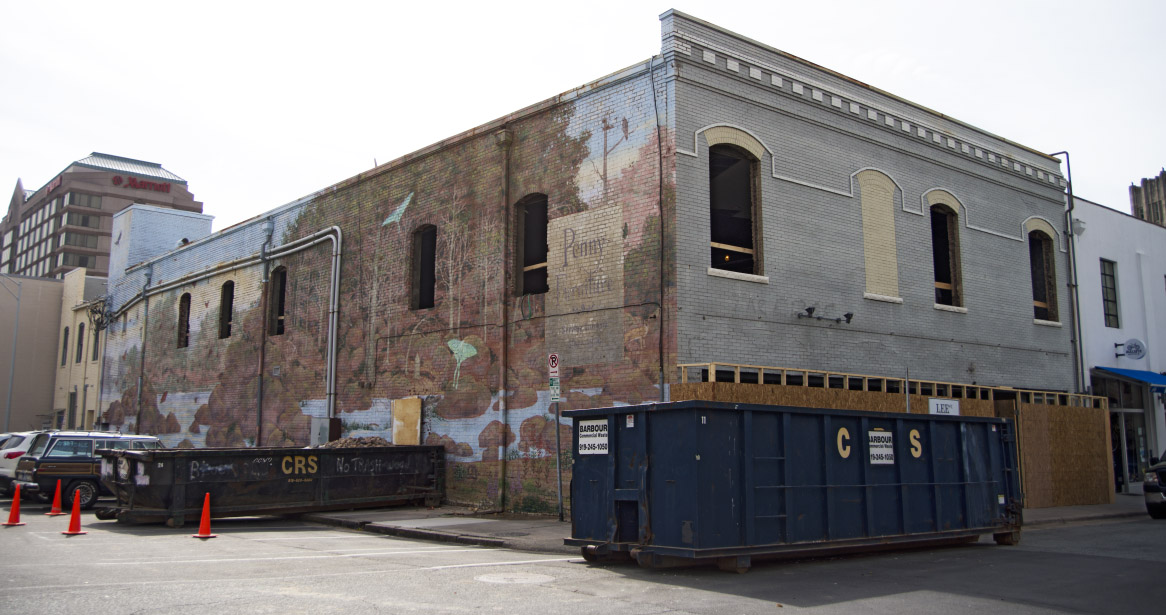 In what I can only describe as a rookie move, the company unceremoniously painted over the mural on the north side of the building, and then proceeded to try to pull in names such as the HPC and this website to justify their action. I wasn't the biggest fan of the mural - it was fine, but I'm not that sad to see it go - but the action and response by the owner was fumbling, at best. One allusion was to the need to repaint in order to "restore the building to its original 1910 appearance." To which I respond a) a casual perusal of this post will show a brick wall painted only with faded advertisements on the north side during the 1960s and b) why haven't they restored the first floor facade, if that was the intent?

In short, I get most annoyed when people justify their actions with b.s. rather than honesty. Don't try to hang the decision on being a historic purist unless you really are one. Just say you didn't like it, costs to much to maintain a mural - whatever the real reason was. 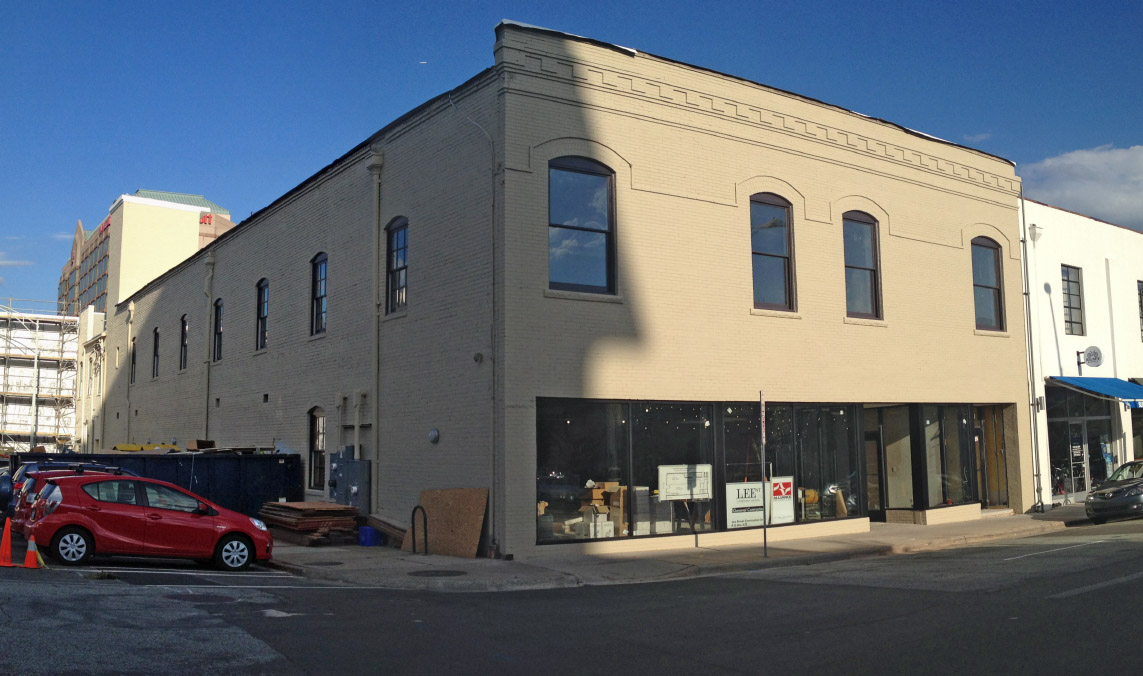 In March 2011, there is now talk of a plan to renovate the building as a multi-level restaurant.

Also, the architect/developer for the restaurant project has floated an associated proposal to change part of that block of Morris St to be two-way.

It was reported in the

It was reported in the Herald-Sun that this building was sold by Greenfire to a developer. However, the rumored tenant (see my previous comment) has apparently gotten cold feet due to the difficult economic climate. No further word that I am aware of with respect to the proposal for changing the traffic flow in that block.

It seems that Caktus

It seems that Caktus consulting (a tech firm from carborro) will be moving in. And surprise! They will be leasing the storefront for retail. YAY!

The first thing Caktus did

The first thing Caktus did was to paint over that awesome mural. Yay. :(

You could only see the mural

You could only see the mural in your rearview mirror anyway.

Well, as I said, I wasn't the biggest fan - but some people do walk.

and some people park there..

and some people park there...going in and out of the Arts Council building with or without children, enjoying the ART of that beautiful mural for years...at least as visually appealing as open windows...they could even have opened the windows and left the mural...

*sigh*
I'll miss that mural. It may have been far, far from the original appearance of the facade, but it was a little piece of color and nature downtown that's now been replaced by an incredibly generic--and, dare I say it, ugly--beige wall. Downtown Durham's real charm is in the individual character of the buildings, and that has now been effectively stripped from this one.