The brick storefront at 303 South Duke St. was built in 1930 by Southern Land and Lumber for the Graybar Electric Company, a national electric supply company. The structure was designed by local architects Rose and Rose.

The brick storefront at 303 South Duke St. was built in 1930 by Southern Land and Lumber for the Graybar Electric Company, a national electric supply company. The structure was designed by local architects Rose and Rose

From a January 1930 news clipping generously sent to me by a gentleman from the Graybar company:

"A brick store building is being constructed on South Duke Stret near the Southern Railway by Mr. M.B. Moore of this city for occupancy in February by the Graybar Electric company of New York, it was announced yesterday. The Graybar company, which is one of the largest electric supply companies in the country, will open a branch distributing plant here for central and eastern North Carolina."

"The new structure here will cost in the neighborhood of $20,000.... has a frontage of 93 feet on Duke Street and a depth of 139 feet. It will be modern in every detail and will provide ample room for the company's distribution."

Graybar purchased the building from Southern Land and Lumber during the depression. 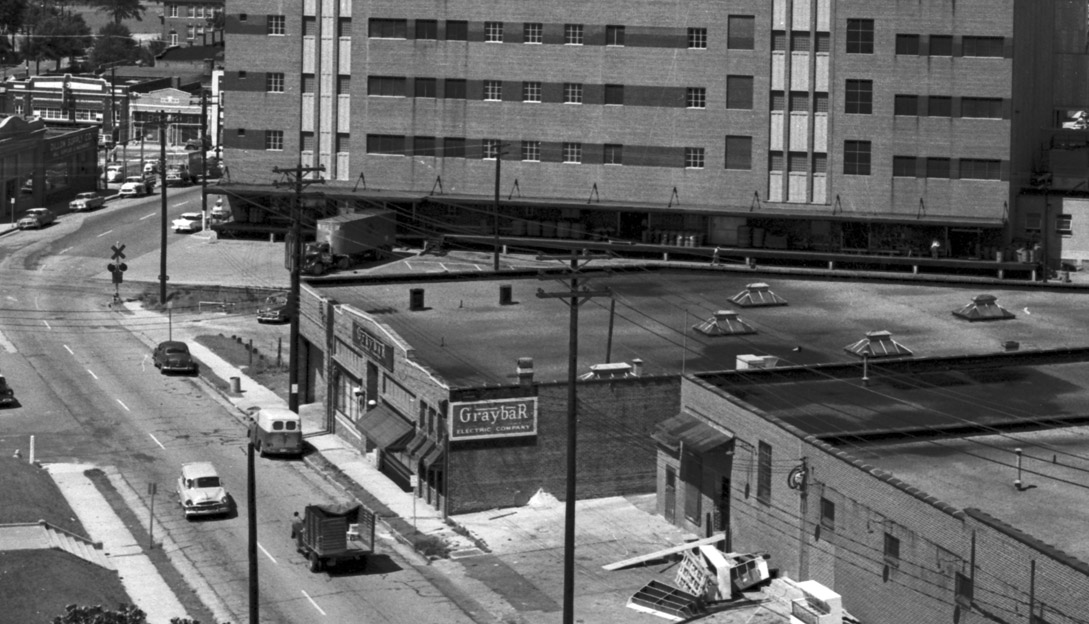 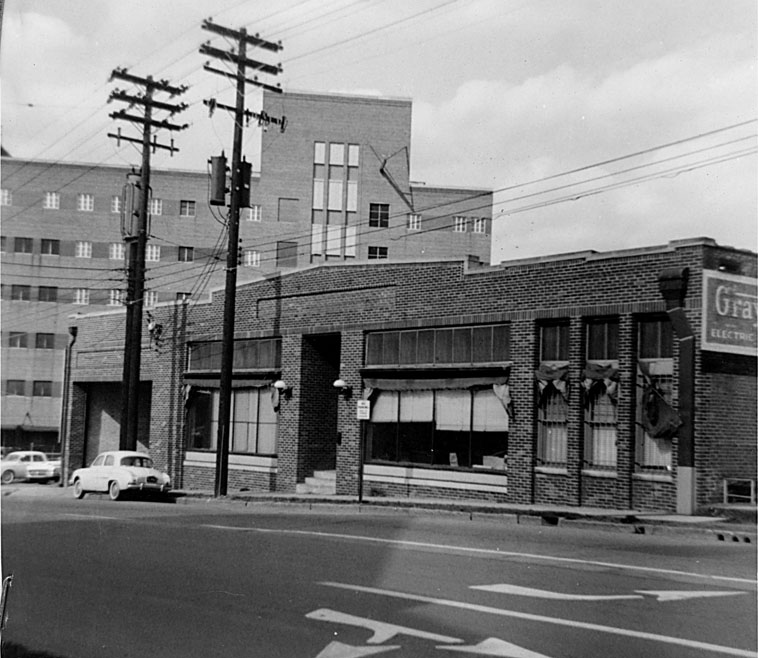 Graybar appears to have moved out of the building by 1961, selling the structure to a "dry goods company."

While the mural on the side of the building implies that it enjoyed a later stint as a furniture store, it's been empty since my second stint in Durham (the current one) started in 1997. 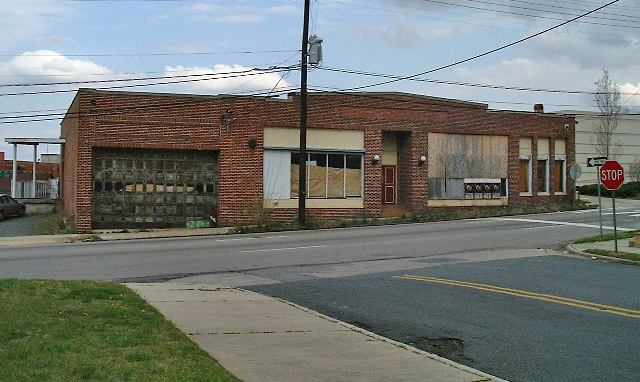 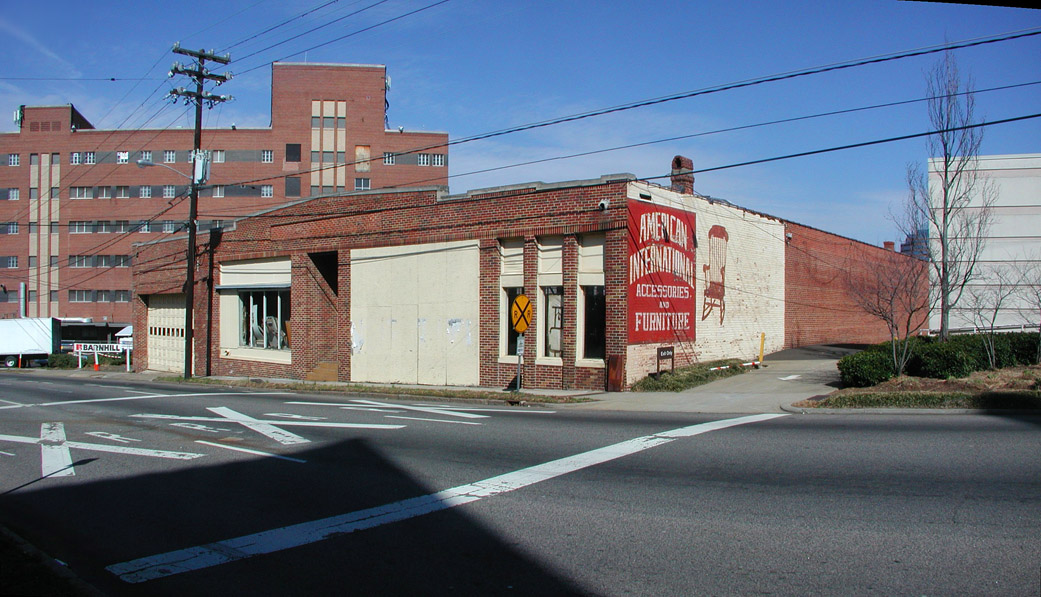 I've always loved this building, and thought it would make a great restaurant/bar. It was owned by the city for quite awhile, until TTA bought it as part of plans for the Vapor Train, i.e. The Little Engine that Couldn't.

And I was happy about that, because I was a big proponent of the train, and still am. It's one of the few things that I can say makes me envious of Charlotte. Are they really that much more progressive than the Triangle? 12,000 riders a day (versus 9000 projected) say yes. As the N&O reported back in January, the line has also promoted significant economic development along the corridor, which rail opponents always conveniently forget.

But back to our little building - TTA owns the triangle of land between South Duke, West Chapel Hill and the railroad tracks. What's the future for this land? Are they going to just be landlords and wait around for us to realize we need to build our own rail system? I'm afraid I'll be too decrepit to walk to the station by the time than happens.

I'm glad they're renting out the old A&P to the Greyhound/Trailways station, but this spot should be redeveloped if the market is there. There was talk of Cherokee Investements being involved somehow in developing land around the hypothetical stations, but who knows what the status of that arrangement is.

Bottom line, I'd hate to see a crucial link in the development of the west side of downtown sit fallow while we figure out if we're going to get serious about public transit. I need to sit on the north deck of a restaurant in 303 S. Duke, watching the freight trains and Amtrak go by, and thinking about what could be. 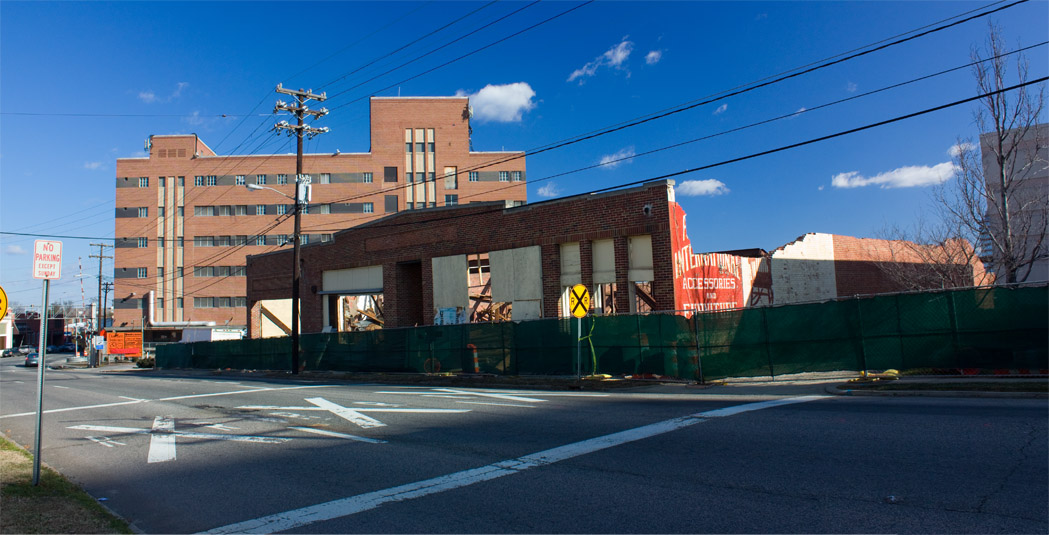 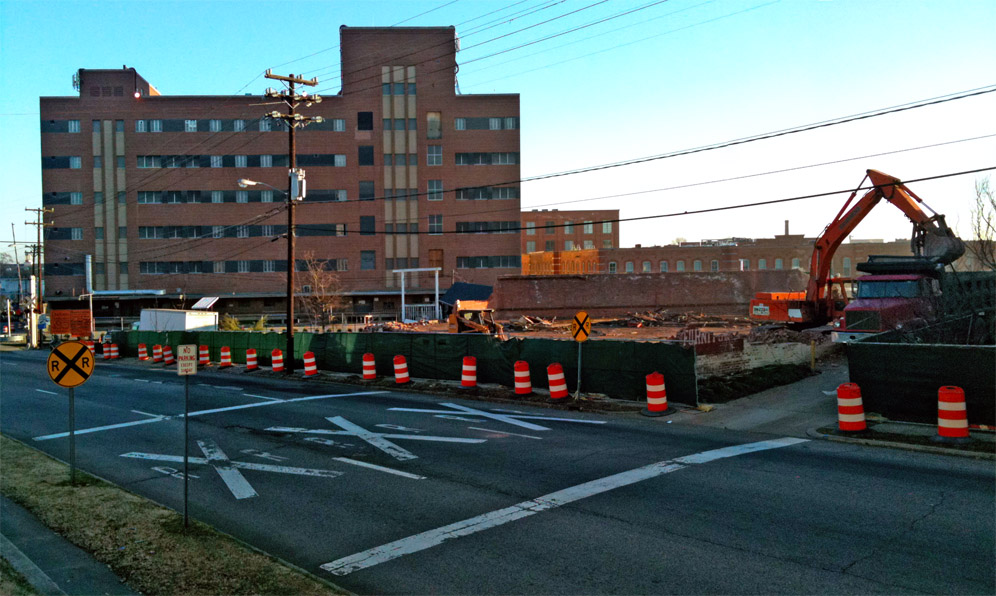 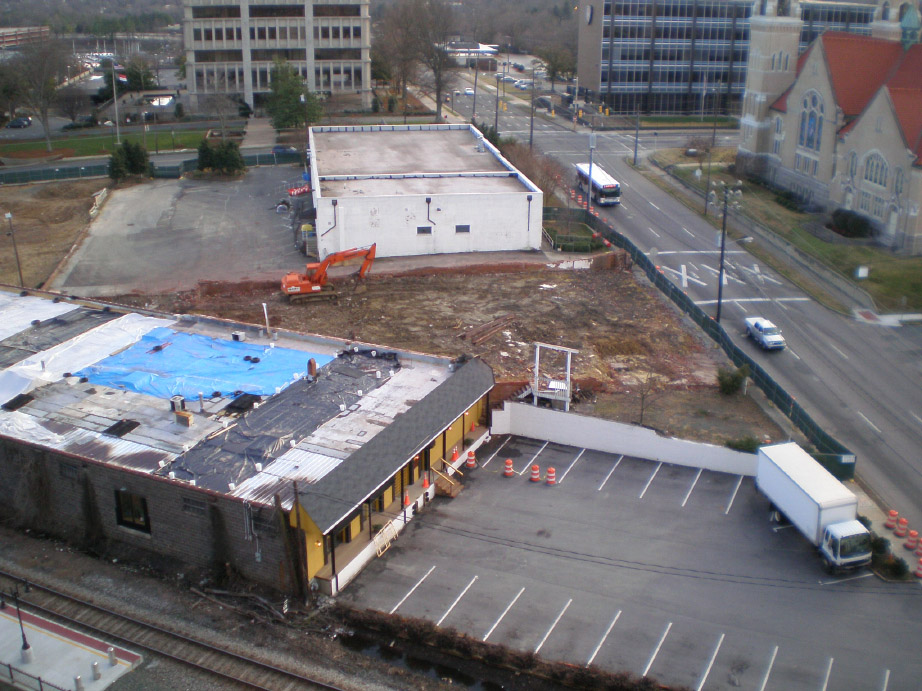 Years ago, the building was listed on Durham's surplus property list for I believe between $300k and $400k... but it was already known that it would be "eminent domained" eventually for the light rail! (Sounds like a bait-and-switch to me.)

I'm not very knowledgeable about public policy or city planning. But I tend to think that the current level of gas prices would lead to a greater desire for public transit which light rail system would be a natural option.

American International Furniture was owned and operated by "Tully" Fletcher from the early 1980s (I think) until he passed away from a heart attack in the early 1990s. (I went to elementary school with his daughter, Jennifer.) The business sold unfinished an custom furniture, and I believe that his widow was forced to sell in order to pay off the business debts (she was also forced to sell their family home).

You'd think that, but there's a contingent out there, headed by the John Locke Foundation and the rest of the Art Pope empire, that's decided that even when it makes mountains of sense, public transit is stupid and evil and a waste of money, and should be opposed at every turn.

There's also the problem of the last 20 years of land use development. Suburbs with no integrated commercial districts and houses on large lots will simply never work well with mass transit -- they're always going to be auto-centric, barring massive infill and redevelopment. The best we can do now is to try to make all the development transit friendly from here going forward, so that we don't make the problem worse.

I could never see the logic

I could never see the logic of TTA's station plan for this site, which called for the demolition of this cool old building to make room for a sea of commuter parking. Wouldn't that make a lovely gateway to the Brightleaf area?

Of course TTA also planned to condemn and demolish Sam's Quick Shop at the end of Ninth Street, a thriving Durham institution (since the 1950's?) - also for parking.

Wouldn't it be less expensive, better for the environment, and just simply more interesting if TTA could creatively incorporate these historic structures and businesses into their station plans rather than bulldozing them?

I strongly support the vision of commuter rail here, and obviously parking is a necessary evil, but I hope "Triangle Transit" puts more effort into rethinking those station plans than they did coming up with a new name and logo (hmm, triangles...Clever.)

I'd like to correct the common misperception that all of us John Locke types think transit is "stupid and evil and a waste of money". The only thing "evil" about transit is that holders of concealed carry permits are unable to bring guns aboard buses (a restriction that does not apply to taxis, bicycles, etc.).

We also think that subsidizing sprawl and widening highways is stupid and a waste of money. I love transit but am unwilling to force others to pay for it. Instead I have voted with my feet and my dollars to live in town where I can walk or bike to many destinations.

I'm hopeful that increased gas prices will force a reconsideration of the merits of transit and highway expansion so that the market can provide transportation alternatives. But I'm not holding my breath.

It's one thing to be a "John Locke type," sympathizing with their small government, libertarian streak, and quite another to follow what the folks at JLF actually put out. Just read Right Angles any week that a story on transit comes out. There's inevitably a knee-jerk reaction against it, regardless of the subject of the story.

As for the silly "don't want to make other people pay for it," when every public road has a toll booth on it to sufficiently cover the cost of all new construction and maintenance, I'll agree that it's time to make transit pay for itself through fees.

Sounds good to me! Of course

Sounds good to me! Of course if the fuel tax wasn't raided by the politicians we'd essentially have the same funding mechanism, but I digress. Privatisation and tolls are much better.