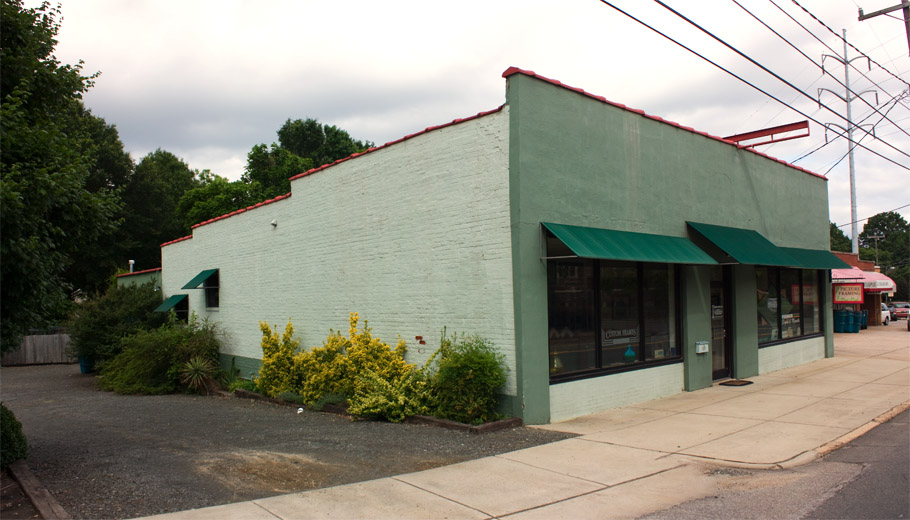 Built prior to 1913, the commercial structure at 2606-2608 Hillsborough Road was initially divided down the middle, with stores on either side. By the mid-1920s, the 2606 side is listed as occupied by VP Hall, but no notation of what business he/she ran. The 2608 side was occupied by Caleb E Garrard, who ran a grocery, called simply Garrard's Grocery Store. Per the Old West Durham website, "long-time resident Bill Holmes recalls [Garrard]'s mule-drawn wagon that delivered groceries to the nearby homes in the West Durham mill village."

The Hillsborough Road Market occupied the 2606 side of the building by the late 1920s, although Garrard is still listed at 2608. By the mid-1930s, Garrard's Grocery had taken over both sides of the building.

During the 1940s, the Haygood Grocery Store occupied the building. The owners realized that a local ordinance stipulated they were too close to Greystone Baptist to sell alcohol. They evidently re-divided the store down the middle and began to sell alcohol out of the western half, which was just over the line.

Alliance plumbing store took over the space in the 1950s, which was later replaced by a "Chinese Grocery store" per OWD until it closed in 1985.

The store was renovated by Mitch Fisher for his business, Fisher Signs, which is the current occupant of the building.

The building was also

The building was also occupied by an audio repair/sales/installation business from about 1986 until 1989. I don't remember the exact date the business moved in, but it had previously been on 9th Street in the old Navajo Trading Post building, and called itself "Sound Sense Stereo Service." Sometime between the fall of 1985 and the fall of 1987, it moved into the building in this post, and called itself "The Stereo Works." The Stereo Works closed in the spring of 1989, if I remember correctly.

There used to be a small apartment in the building's north corner, with the kitchen near the center of the building.

Is Mr. Fisher the one

Is Mr. Fisher the one responsible for the beautiful garden on the adjacent lot?

As I understand it, he is.

As I understand it, he is. The garden in that lot is always stunning and bursting with beautiful vegetables.

Mitch Fisher was also kind enough to donate the Old West Durham sign to the community, more than ten years ago.

It stands near the middle of the neighborhood, at Ninth & Hillsborough...

So he's a good local business

So he's a good local business owner, a good gardener and donates to local community organizations. Sounds like a heck of a guy to me.