The louvered sides of the Garrard warehouses, visible along Fuller Street (between the Imperial Tobacco building in the foreground and Durham High in the background.)

The Garrard warehouses were, like most other tobacco warehouses, used for storage, drying, and curing of tobacco leaves. Unlike the Bullington and Carmichael, built along N. Duke St., the Garrard warehouses possessed little external adornment - large functional venting louvers extended along the sides of the warehouse, with brick parapet walls at the north and south ends. 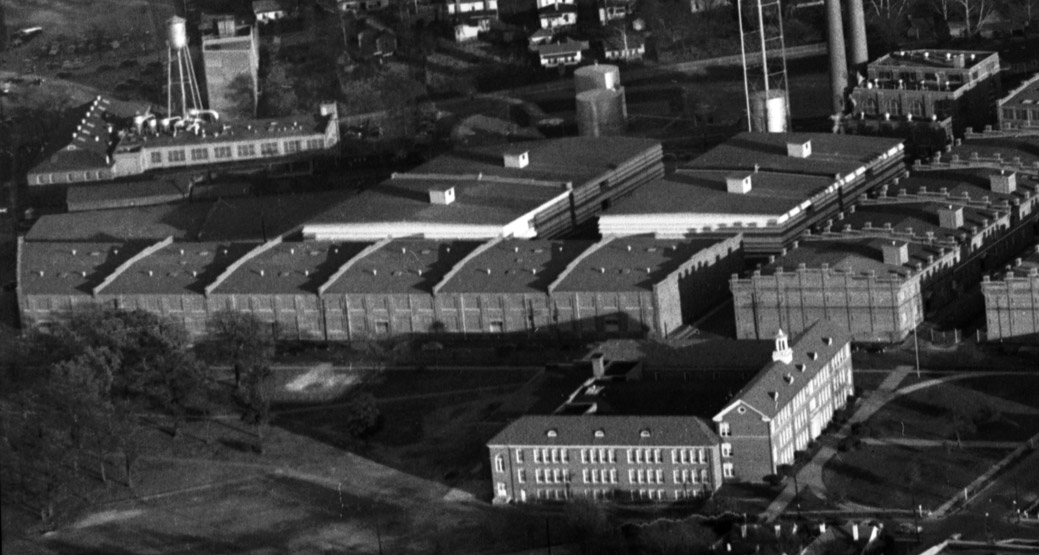 Looking east, 1948, at the Carmichael warehouse in the foreground, and illuminated behind it, the Farley warehouses.
(Courtesy The Herald-Sun Newspaper) 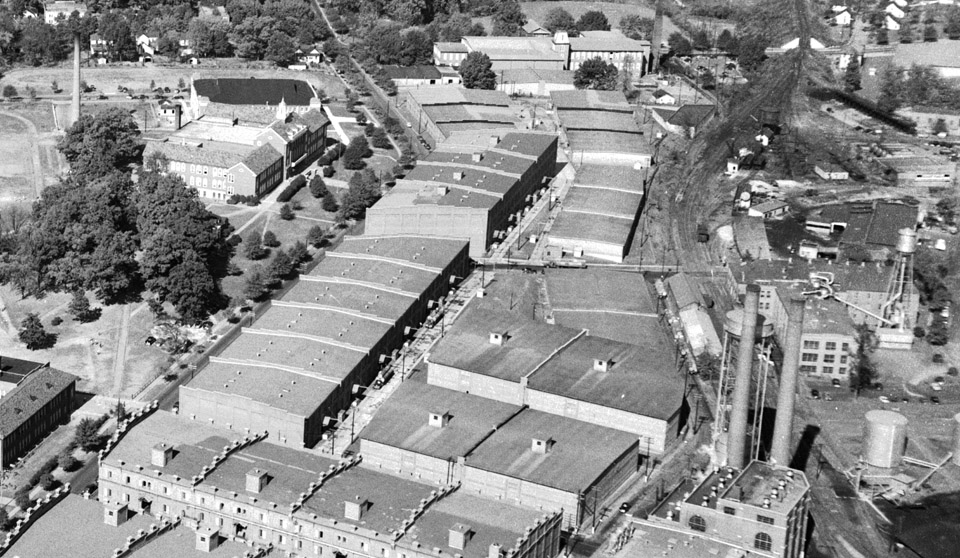 Looking north, 1950s at the two Farley warehouses, and the Garrard warehouses stretching northward along Fuller Street and the Beltline railroad.
(Courtesy The Herald-Sun Newspaper)

The last sighting of these warehouses that I've located is in 1972; I assume that they existed up until the Carmichael and Bullington warehouses were redeveloped in the early 1980s, and then turned into parking.

Site of the southernmost of the Garrard warehouses, 05.25.08. 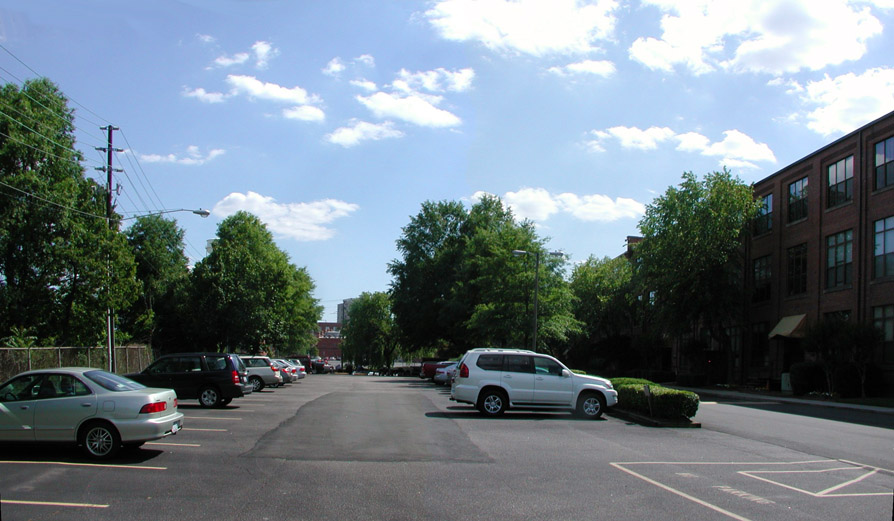 Site of the northernmost of the Garrard warehouses, 05.25.08.

A piece of one of the Garrard warehouses remains, however. 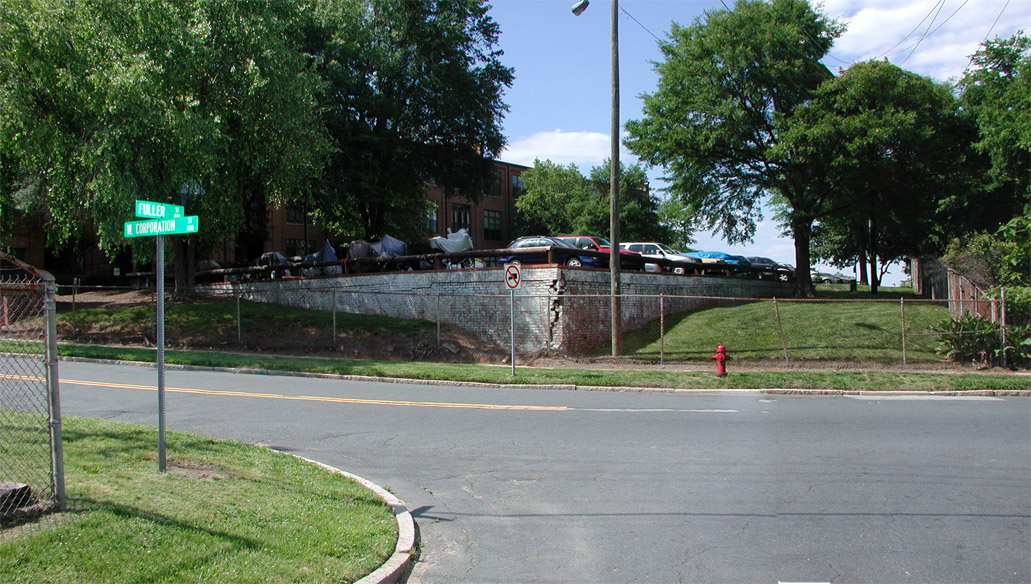 Although this looks like just a retaining wall holding up that parking lot above it, it's actually the foundation of the warehouse, complete with ID. 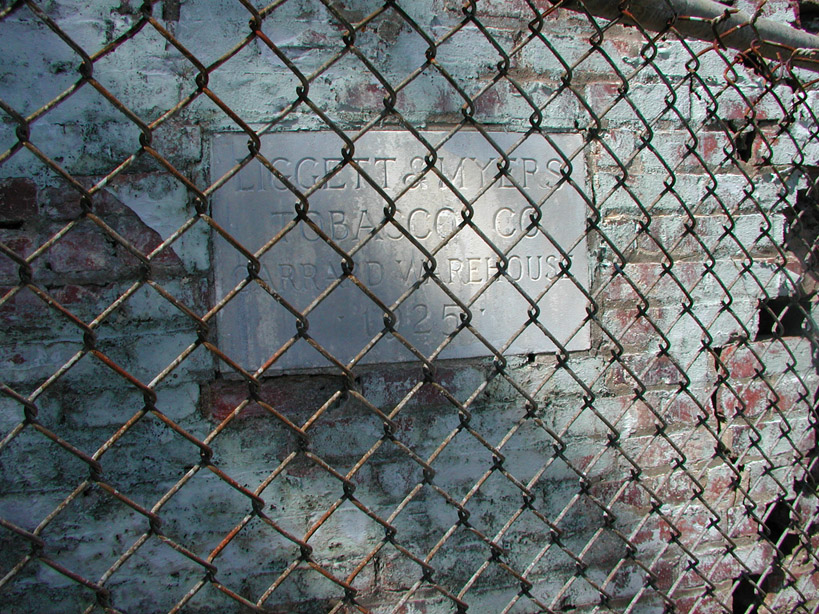 I wonder if the parking lot

I wonder if the parking lot is nothing more than asphalt laid on top of the old warehouse floor, with the walls and roof simply removed.

I have to say, I'm absolutely

I have to say, I'm absolutely enthralled with this web site. I think I'm becoming obsessed with it because I'm checking it multiple times a day now.

You are doing a great service to Durham - it's firing up my interest in, and passion for, our wonderful city.

For those of us without the wherewithal to buy and save these beautiful structures, how can we get involved in the effort to support preservation?

Anon2Thanks so much - I think

Thanks so much - I think the best way to get involved is to make you elected officials aware of how valuable Durham's history is to you, and that you expect them to implement policies/programs that help protect our architectural history. The message still isn't getting through, unfortunately. A friend sent out a message today to point out that NIS' #1 goal for the next year is:

"To demolish unsafe residential and commercial structures located in the City of Durham."

Not to repair, not to revitalize - to demolish. Given how incredibly loose their definition of "unsafe" is, we'll be lucky if East Durham is still standing in 2 years.

One of my favorite little

One of my favorite little stupid things to walk by in Durham is the small -- like maybe 75 square feet -- building that's just to the NW of the fenced-in stone you picture. It's not square in plan, and is right there at the entrance off Corporation. I assume it used to be a little guardhouse. It even has a little tin chimney or smokestack coming out the top, IIRC.