The Fitzgerald building, which the architectural inventory describes as "one of the most auspicious structures in West End" was built in 1910 by Richard Fitzgerald, successful brickmaker who had built his own house, The Maples, nearby at Wilkerson and Gattis. The building stands at the curve of Kent St. to the south from West Chapel Hill St., and provided a strong terminating vista for the streetcar line heading south to Lakewood.

The Fitzgeralds were one of the most prominent African-American families in early 20th century Durham, and their brickyards provided the brick for many still extant structures in Durham. Richard was also the great-uncle of Pauli Murray, who grew up nearby on Carroll St.. Richard Fitzgerald had also given the money for the Emmanuel AME church which had been built of Fitzgerald bricks in 1888. 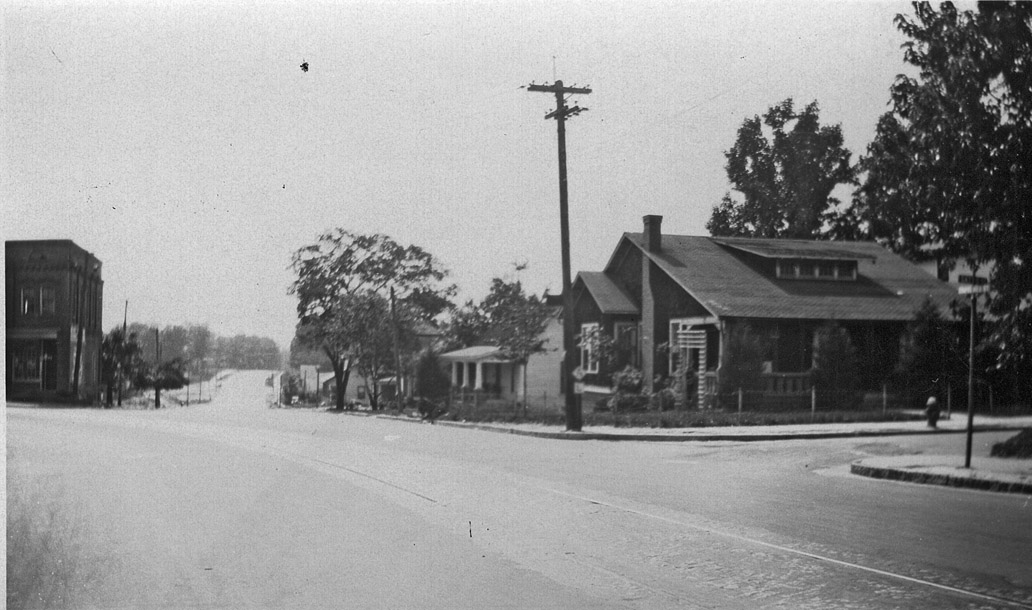 Above, a partial view of the building, looking west on West Chapel Hill St. at Gattis St., 1920s. Notice the curve of the streetcar tracks to the southwest.
(Courtesy Duke Rare Book and Manuscript Collection)

The building housed Pickett's Market and, later, the Davis meat market. At some point, the original brick detailing was obscured by stucco - whether this was applied during a 1980s renovation or not, I don't know. The building houses offices today. 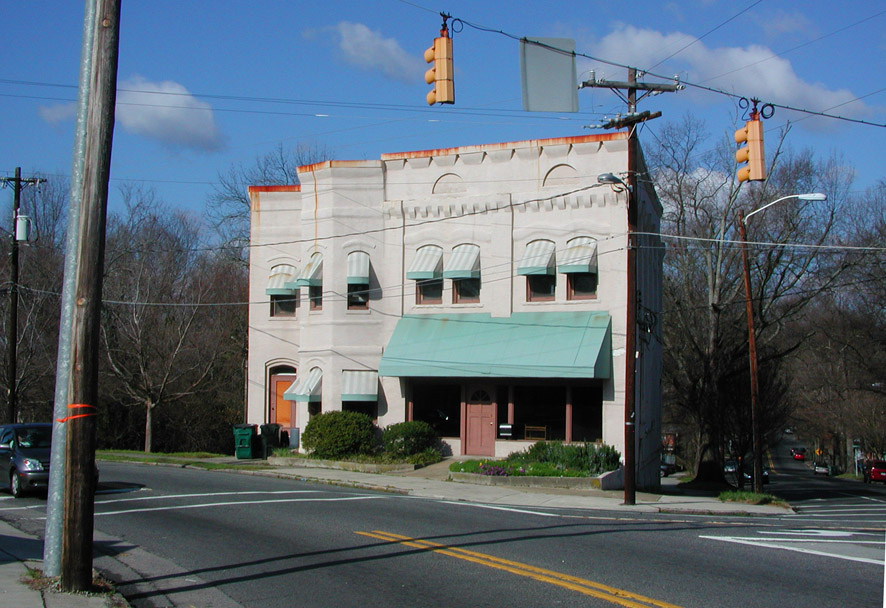 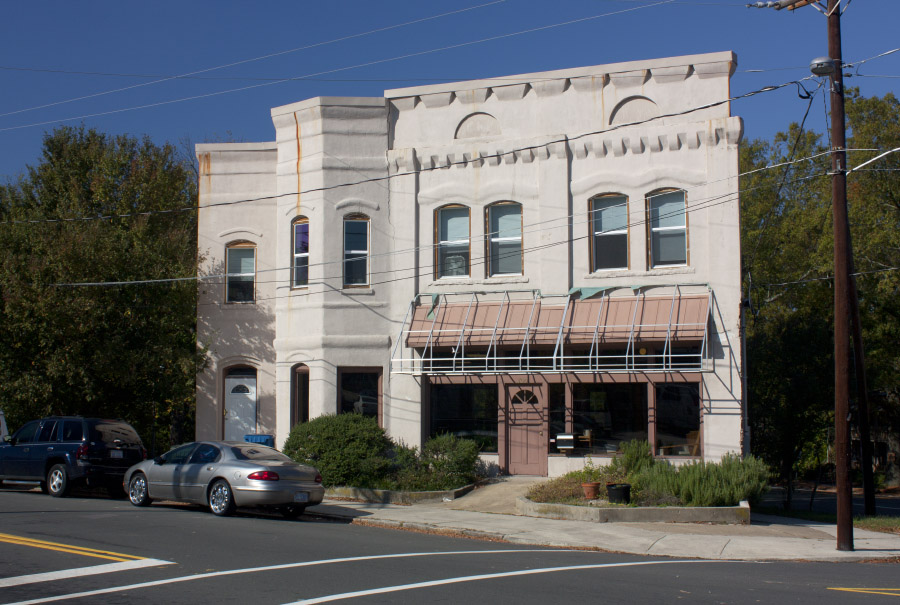 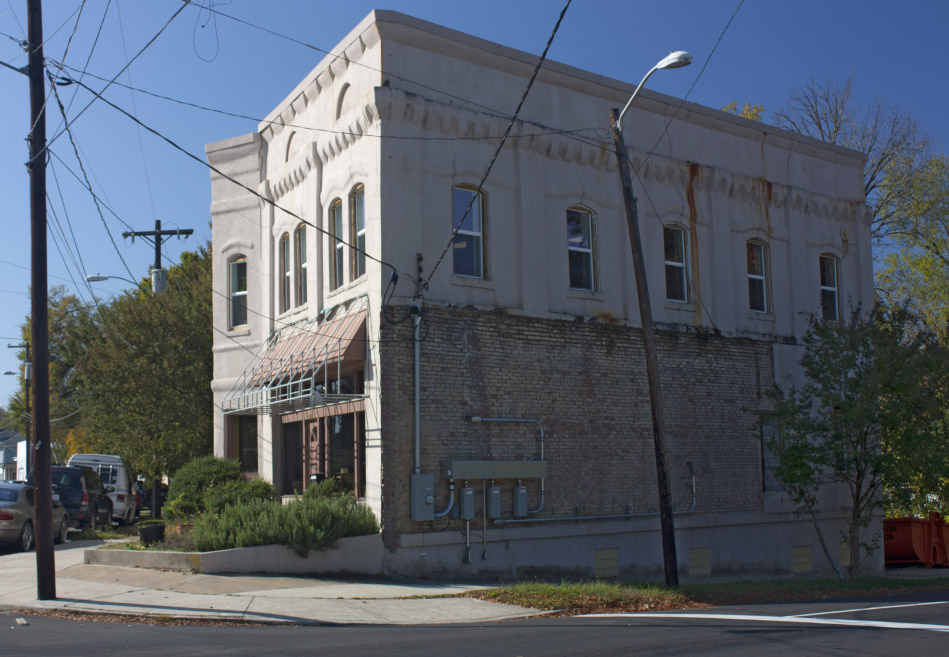 When I moved here, I thought

When I moved here, I thought "that's where my record label will be!" haha.

The stucco was part of a

It's hard to imagine Chapel

It's hard to imagine Chapel Hill Street / Duke University Road without those huge oak trees. The difference between the historic photo and the current view is quite dramatic.

I'm sure it's just a matter of time before Duke Energy swoops in with their abyssmal tree "pruning" program, and ruins the one thing this street has going for it, just as they've recently done to Duke, Gregson, Markham, Green, and so many others.

Stucco and renovation do not

Stucco and renovation do not belong in the same sentence! What, no vinyl siding available?

What an ugly "makeover."

If I'm not mistaken, a few of

If I'm not mistaken, a few of the trees in the first picture are still there in the second picture - much larger now, naturally, but they've survived the past 80 years pretty well.

And I always wondered why Chapel Hill St. curved like that. Yeah, streetcars - I should have thought of that.

Your first paragraph mentions this being Kent Street and Chapel Hill St, when, in fact, isn't it Chapel Street and Duke University Road?

In fact, it isn't. Duke University Road starts 2-3 blocks west of this intersection, depending on which side of the street you're counting on.

My father owned this building

My father owned this building from around 1950 until about 1970. The building had structural problems and he donated it to Duke University as I remember. The building was stucco during the 20 years he owned it. Cole's Dairyette occupied the space during the first years he owned it. Also in the basement was a nightclub, "Null & Void", and was very popular at the time. Doug Clark and The Hotnuts preformed there many times.

I think it looks kind of cool

I think it looks kind of cool in stucco, rust stains aside; sort of ghost-like. It will probably look better in brick, but I'd rather have seen it stuccoed than allowed to deteriorate. Of course, the wrong kind of stucco can destroy a building like this, so it's probably a good thing it came off, as long as the re-pointing used the right kind of mortar. And, yes, it could have been covered with vinyl siding which really would have been hideous.