Edgar Knox Powe built his house at Swift and West Pettigrew Streets in the late 1890s; prior to his arrival in Durham, he had been an executive with the Altamahaw Cotton Mills in Alamance County. He was brought to Durham by William Erwin as general manager of Erwin Cotton Mills. I'm unsure as to whether his marriage to William and Jessie Erwin's sister, Claudia, occurred before or after his arrival in Durham. 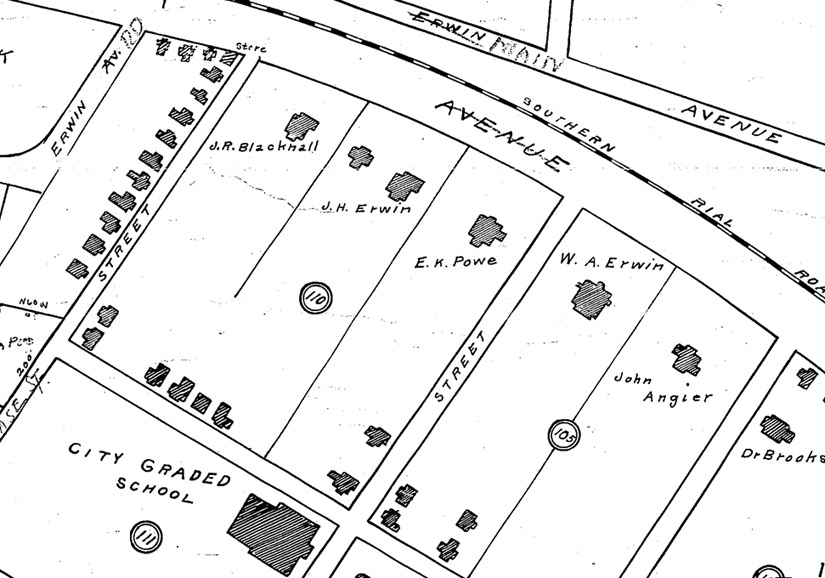 Powe was a longtime member of the Durham County Board of Education, the City-County Board of Health, and active in St. Philip's Church. When he died in 1929, the West Durham School on 9th Street was named EK Powe School in his honor.

The Powe property extended south to Caswell Place, and included a barn, fruit trees and vineyards. The Powe's daughter and her husband built a house in the backyard of the property at some point. 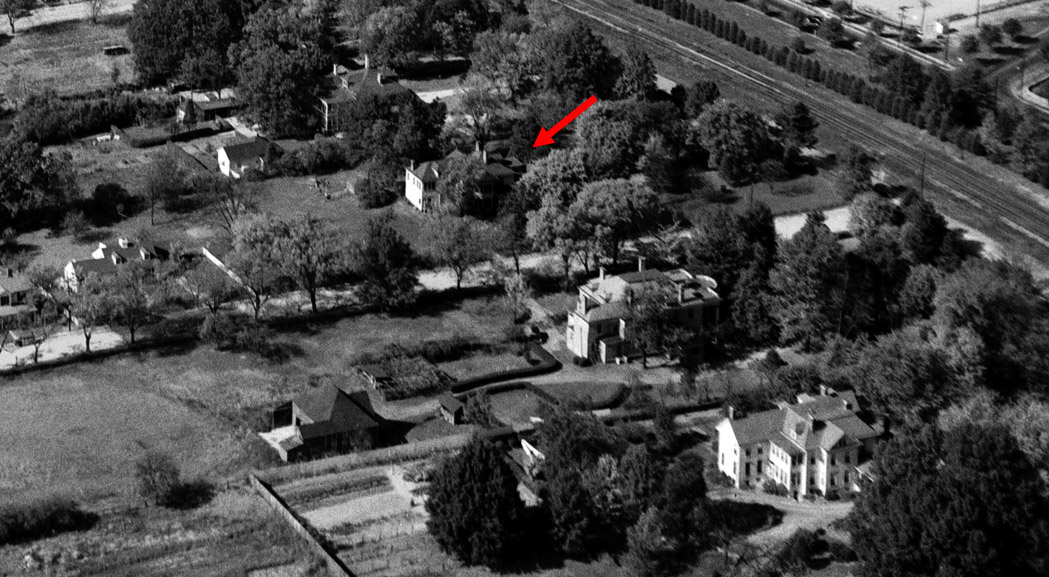 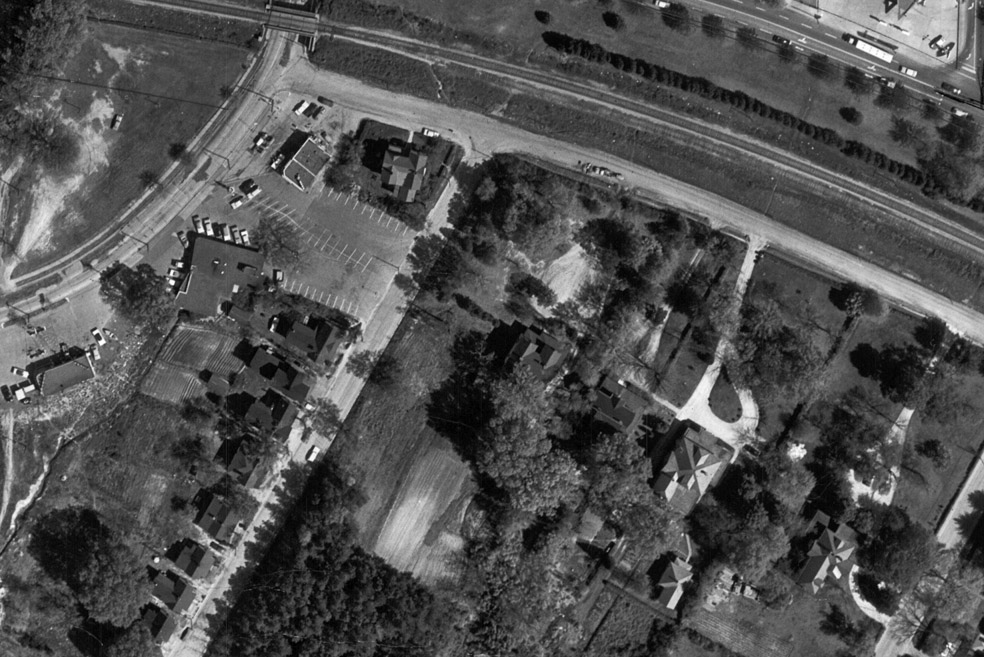 They lived in the house, and Roberts had his medical practice in the house until the early 1970s, when it was purchased by Hillhaven Convalescent Center.  It then became a well-worn apartment house for students, the house became affectionately known as "Monkey Top" or "Monkee Top" - derived from the older name "Monkey Bottom" for the area around Case St. and Erwin Field. (The EK Powe house had never been called Monkey Top prior to this.) As is often the case with history, the derivation becomes conflated with the explanation, and occasionally folks will erroneously note that the name "Monkey Bottom" was formed from "Monkey Top." 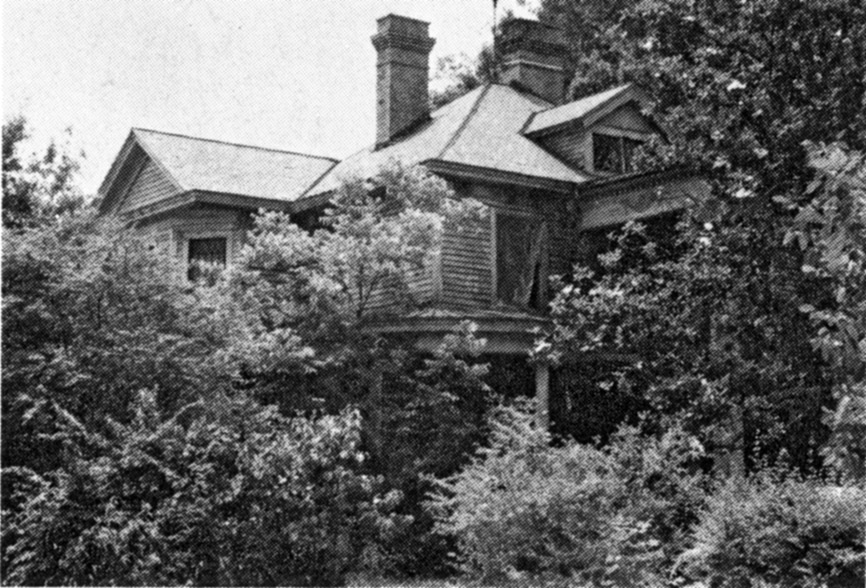 In the 1980s, a developer from Charlotte named Brian South bought the Jessie Harper Erwin House, Sunnyside, next door and the EK Powe house; he moved Sunnyside to the east and turned it to face the EK Powe House (south). He renovated both houses as commercial spaces. South also renovated the former Public Library on East Main Street in ~1984 and (unconfirmed) the Coca-Cola Bottling Plant on West Main before disappearing from the scene. 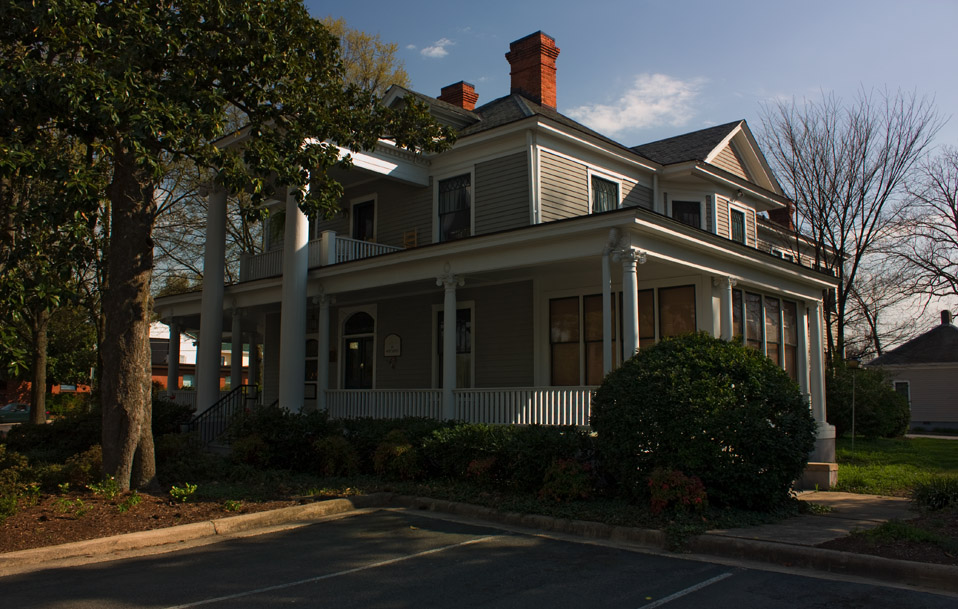 I am curious in knowing what

I am curious in knowing what is the city graded school in the scanned image?

I must admit that I'm

I must admit that I'm relieved - finally a pair of big grand houses that still exist! not that their current use as office space (nor their location) is all that glamorous, but we've lost so many others that I half expected to see the vacant lot where this once stood as I scrolled down the page.

Regarding the EK Powe house,

Regarding the EK Powe house, I recall the garland relief that was on the front porch fascia. It is faintly visible on the older of the two pictures. Even when the house was in its neglected stage, the garland revealed its formal elegance. I think the ornament must have been in poor shape, because it did not make it through the remodel.

Actually, the E.K Powe house is still pretty spectacular on the interior - not much glamour was lost. The interior work was both gentle and sympathetic. Fine woodwork, especially fire place mantels and cornice moldings survived as did the fine floors. As office space goes, I would not hesitate to describe it as glamorous, expecially compared with the anesthetic office space built these days. I would add that the magnolia tree preserved in the front is magnificent and a treasure in its own right.