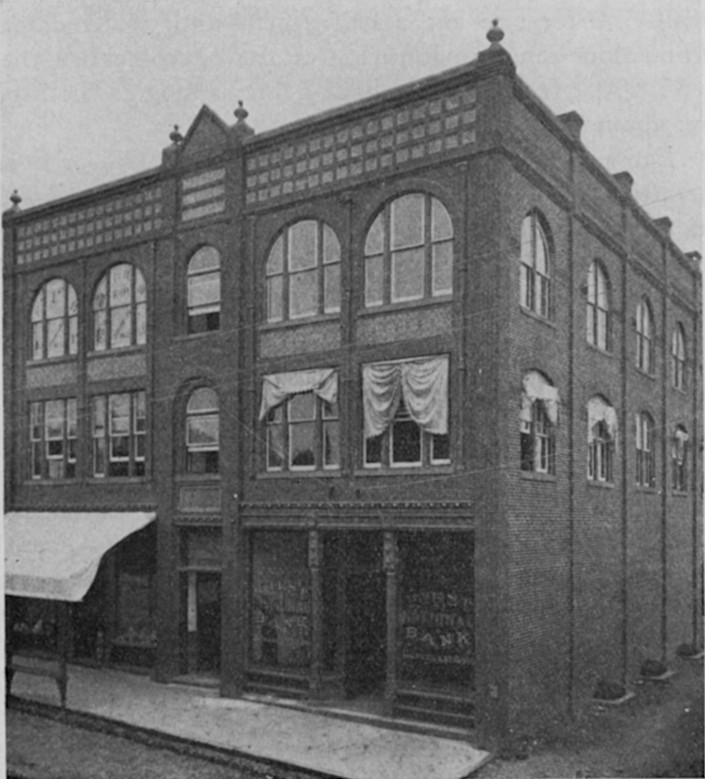 In 1879 EJ Parrish (the first man to auction tobacco in Durham) built a tobacco warehouse on the southeast corner of Mangum St. and the eponymous Parrish St. 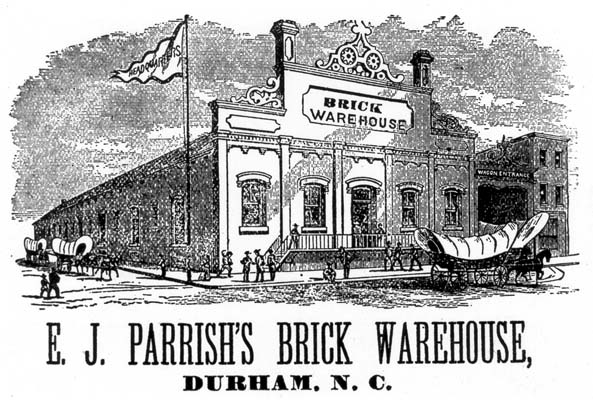 No records exist of the exact location of the warehouse, but I do know that it was on the "western portion of the site", which would imply that the above view is from Mangum St. The Conestoga wagons were used to haul the tobacco to the warehouse for auction.

By the 1880s, this warehouse had burned, and Parrish built a new warehouse on the north side of the street. Julian Carr owned the site and constructed the 3-story Parrish Building soon thereafter. 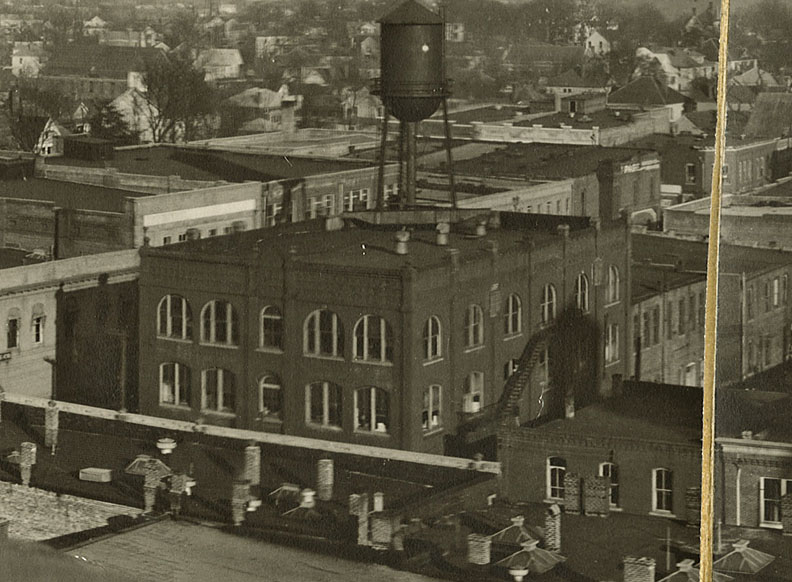 Multiple businesses used the building during the first part of the 20th century - the first offices of the Golden Belt Hosiery Company, the first location of First National Bank, and Durham's first movie theater - the Dreamland theater. It lost some of its late 19th century ornamentation and, it appears, received the stucco treatment. 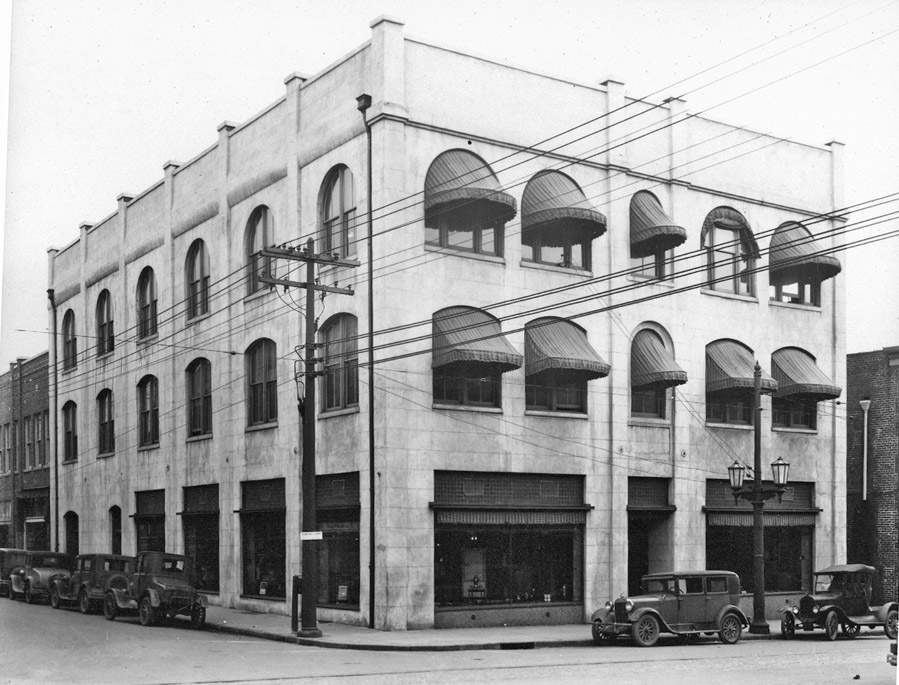 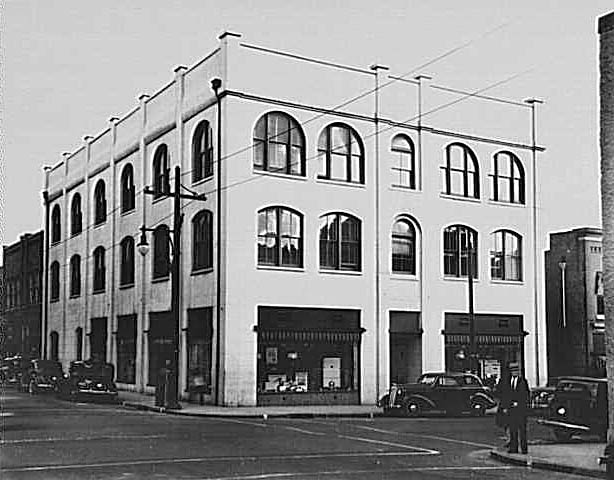 The Duke Power Company had quite the electrified Xmas display. I guess they sold appliances as well, from the looks of the window displays. 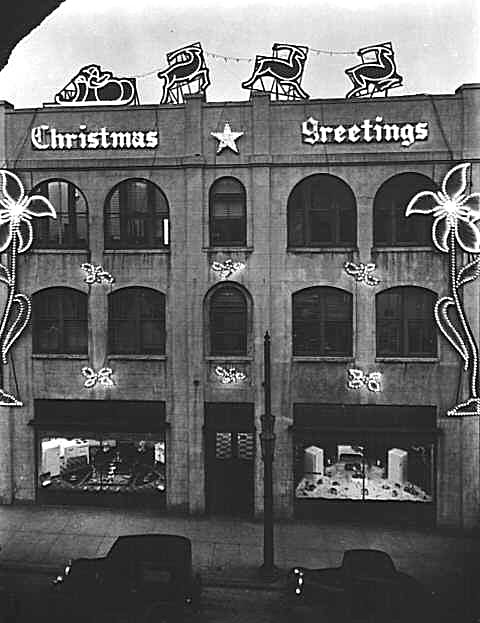 I find the anti-window fetish of the 1950s-1960s truly bizarre, and this was the typical approach. I can only imagine that it was an attempt to save energy, but it seems sort of baffling to me. 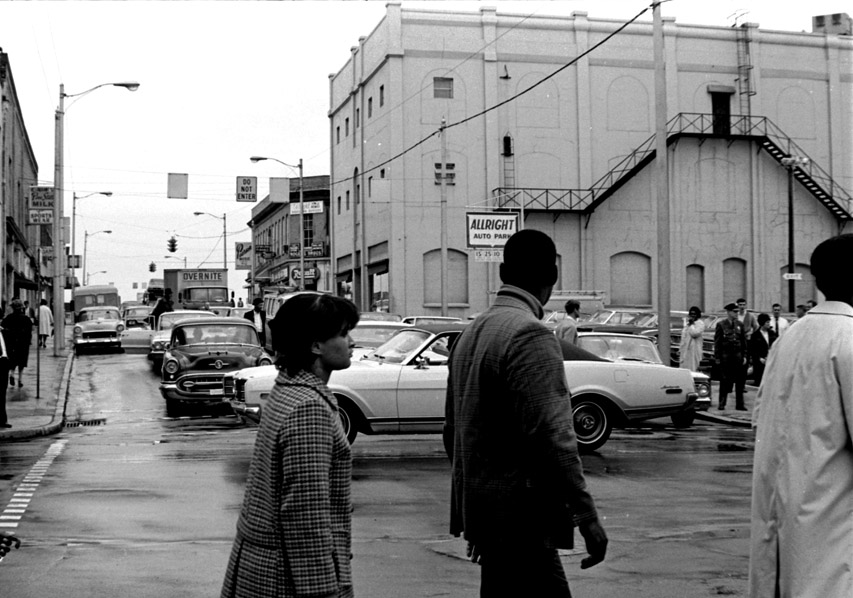 Parrish Building after the demolition of the buildings to its south, on East Main St., 04.05.68
(Courtesy Herald-Sun)

In 1972, Duke Power constructed the building just to the south of this site - I guess the bricked in windows still weren't modern enough. This building was torn down soon thereafter. 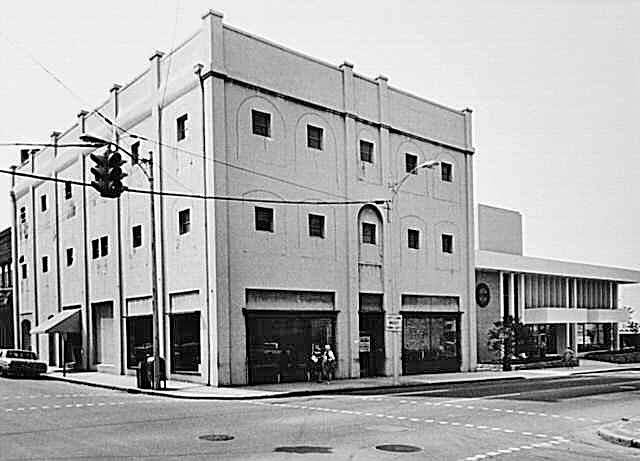 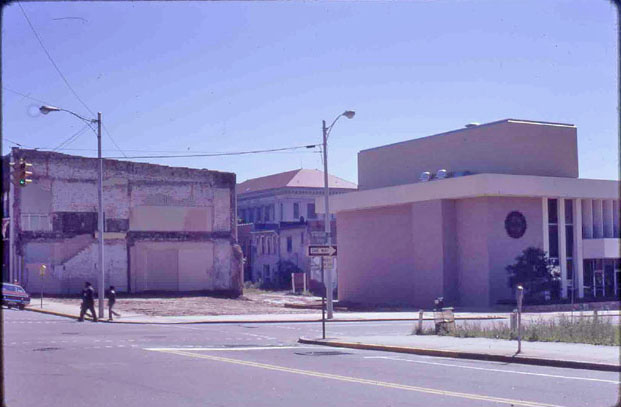 Oddly enough, it was replaced several years later with a somewhat similar building - which seems to echo some of the elements of the original building. I believe that it contains law offices. 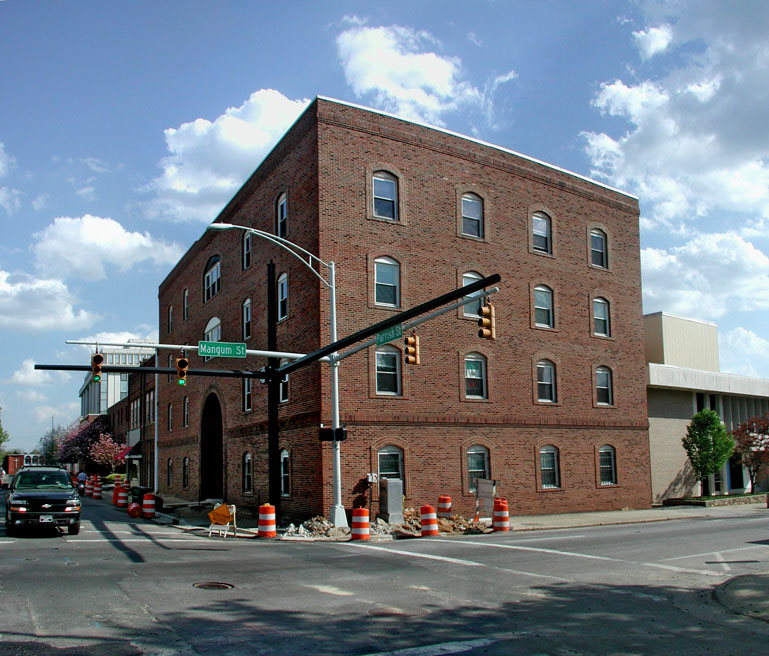 Gary - i can't imagine that

Gary - i can't imagine that energy savings were on anyone's mind when it came to bricking up windows in the 50s and 60s. Following WWII, supply exceeded demand for pretty much an entire generation, up until the 1973 oil embargo, which essentially created OPEC as a world power.

I think Civil Defense concerns may have been a greater factor in bricking up windows in old buildings. I was a little young then, myself, so i can't say for certain. But i definitely spent more time ducking and covering as a 6 year old than learning about energy conservation.

BarryYou are right, and as I

You are right, and as I thought more about it, it's extremely unlikely that Duke Power would do anything to outwardly promote energy conservation.

It just amazes me how pervasive this was - and it seems hard to imagine that it was all aesthetics. If you look at my hotel carrolina/durham silk hosiery mill post, you'll see that they did essentially the exact same thing on a huge factory building. It goes along with my ongoing struggle to understand removing the top floors from buildings as well. I've heard energy costs, property taxes - all kinds of hypotheses.

Civil defense is an interesting idea that I hadn't considered. What do you think the perceived threat would be that would be averted?

Making them into fallout

Making them into fallout shelters?

Either that, or it was a knee-jerk reaction against race riots, trying to make buildings harder for burning things to be thrown into. If that's what it was, it was a pretty damn huge overreaction.

Well, i think you see this

Well, i think you see this trend throughout the country, not just in the South or areas prone to "urban unrest." But without more research i couldn't say that unequivocally.

But i think racial tensions in general are probably not as much a factor.

The reason i say Civil Defense is that i vividly recall, as Michael hints, fallout shelter signs pretty much everywhere on my trips throughout Manhattan and the Bronx with my grandmother as a child in the late 50s and 60s. The fear of "the Bomb" was omnipresent. I don't know if glass is truly more transparent to ionizing radiation than brick, or if that was just a common supposition, but i think the prevalent social attitudes about the commies would explain this architectural trend better than anything else that comes to my mind. And my recollection of old buildings in most towns i've lived in is of bricked over windows. Couldn't say that they were all bricked up at the same time, but it makes a certain amount of sense.

Which means it will probably turn out to be a maintenance issue, and all the glass cleaners had to retire because they couldn't afford insurance anymore, and it was easier to brick the windows up than try to clean them with untrained help. Or something.

Great post; I'm always interested in early movie theaters. Another one not far from the Dreamland was the Wonderland: http://digitaldurham.duke.edu/hueism.php?x=photograph&id=505

Hmmm...well, a fallout shelter on a second story isn't very practical. I know when hosiery mills (for instance) were converted to use brighter indoor lighting (large fixtures like fluorescents) and air conditioning circa 1950s, they bricked up most of the windows because they just weren't needed anymore (i.e. for lighting or ventilation). It's a whole lot easier to maintain a brick wall than a 24-paned window! I guess it also stopped daydreaming workers from staring out a window!

Thanks - there were a great number of theaters in the early 20th century, only a few of which I've gotten to. I will definitely profile the Wonderland when I get to do more of Hayti (I mentioned the Regal back in October). There were theaters in the 100 and 200 block of E. Main as well, which I'll get to soon.