Designed by noted ecclesiastical architect James M. McMichael, Edgemont Baptist was completed in 1915, and was the dominant church in the Edgemont community. It remained home to that congregation until 1989. 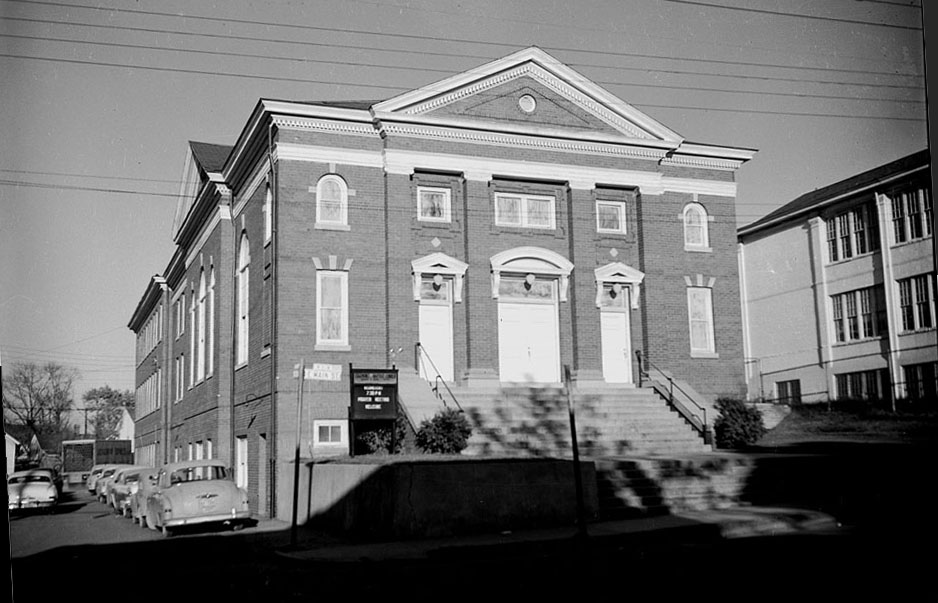 Edgemont Baptist was established on the northeast corner of Elm St. and East Main in 1902. The initial structure was a small wood frame building, which burned to the ground in 1913. The church used the Edgemont Graded School next door as a temporary place of worship until 1915, when the congregation rebuilt their church with an impressive neoclassical masonry structure. The church initially had a parsonage at 211 Hood St. (then called Parrish Place) and, later, a parsonage at 405 N. Hyde Park Ave. (from 1945 to 1968.)

According to the church records, the church had the first indoor baptistry in Durham - it being commonplace in early Durham to baptize people in pools and rivers. The 1867 map of Durham shows a pool about where Durham Central Park is now, labelled "Pool used for Baptisms by the Baptists and Methodists." 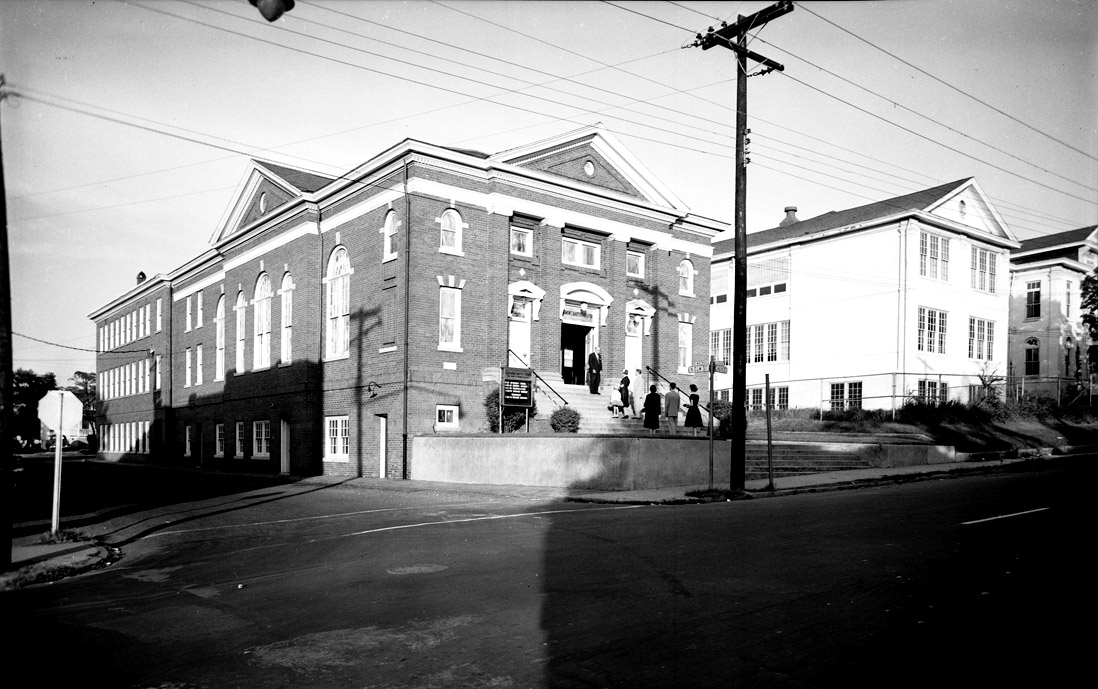 The church and the parishioners changed along with the neighborhood during the 1950s and 1960s. The structure remained Edgemont Baptist Church until 1989, when the congregation moved out to Wake Forest Highway, and later Infinity Road, becoming "Edgewood Baptist Church. Today, the structure on East Main St. is the Refiners Fire Community Baptist Church 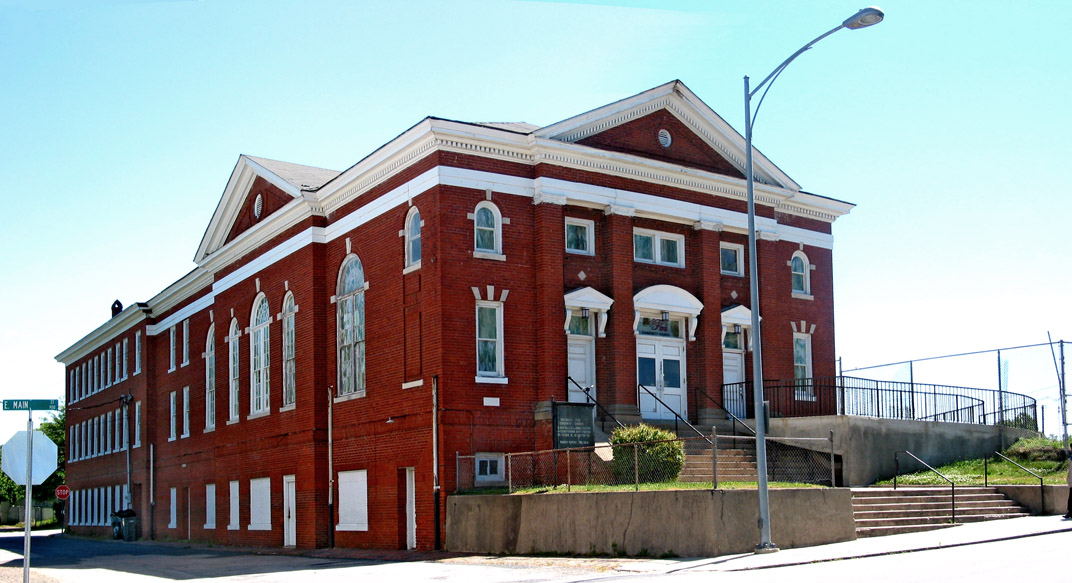 I took the above picture several months ago (as I often do) in anticipation of doing this post at some point. I was rather shocked and disappointed that the congregation would decide that this beautiful deep red unsullied brick needed a coat of paint slapped on it. 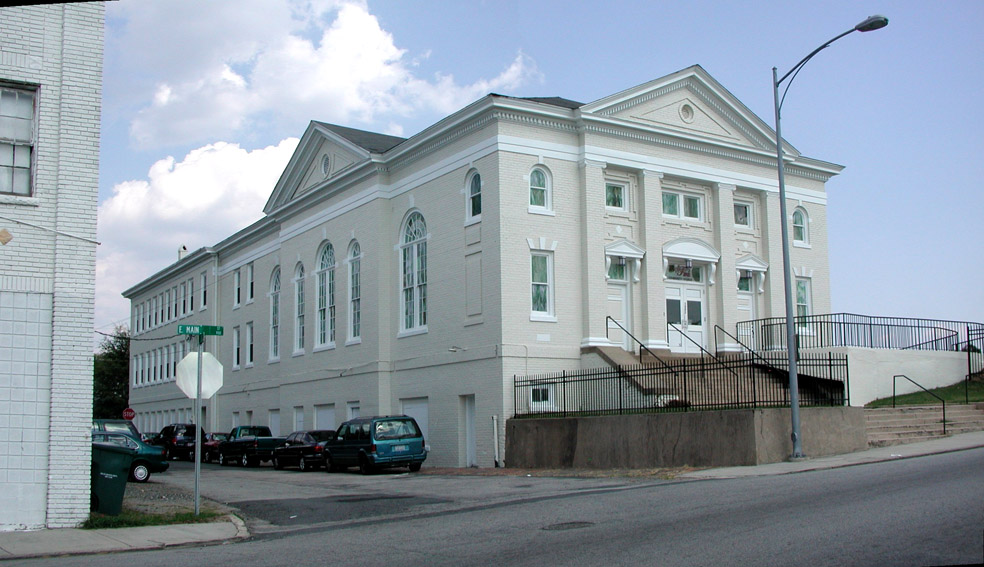 I'm never entirely surprised what people in Durham will do to historic structures, but that coat of paint makes no sense. I can't even imagine what they were thinking. Red is the color of the devil and needs to be covered up?

I wonder if any city ordinance prohibits this. About ten or fifteen years ago, the owner of the building where Rue Cler is now, painted it. The city actually forced her to have the paint professionally removed. It may have happened because downtown is an historic district and the building is considered a contributing structure. Is this church part of the East Durham historic district?

Unfortunately not. There are no local historic districts east of Cleveland-Holloway. The downtown district stops at the Health Dept. There are two national register districts - Morning Glory and East Durham - but this only provides tax incentives, no protection. Would that we had a local district anywhere in East Durham - NIS wouldn't be able to do their thing willy-nilly.

I don't get it either - but there is a very different aesthetic at work here I think - one which values houses and buildings that look "new" rather than "old." It's a prevalent sentiment in Durham.

Yeah, but don't you think a

Yeah, but don't you think a covering of protective vinyl would have been much better with far more lasting value??? It's the wave of Durham's future. ;) Lickity-split.

Too bad about the paint job;

Too bad about the paint job; it'll probably last about five years and then will be falling off in sheets (paint doesn't stick to brick very well overall) and look like crap. And of course then it's hard to remove. Most people think they can sandblast it off, but then it destroys the brick face which accelerates the building's deterioration.

It is very concerning that churches as a whole like to destroy their own beautiful old structures; even near where I live in Orange County, an AME church from circa 1880-1920 I'd say removed their beautiful old/original, wavy glass arched windows and replaced them with crappy pastel-colored generic stained glass. Probably cost them a lot, and looks horrible; I'm sure the large old windows went to the dump.

At least it didn't get turned

At least it didn't get turned into a parking lot.

We can take comfort in that.

Having grown up in East

Having grown up in East Durham and passing Edgemont Baptist Church almost daily, I'm used to seeing everything there turn to crap. The people at the church thought they were doing a good thing by painting it (for whatever reason), I'm sure.
The only way to keep its original "historical" look, would be for somebody who has enough money to buy it and keep it that way. I can't do that, do you know anybody who can?

Edgemont Baptist Church purchased a Geneva theater pipe organ in 1938, supposedly from Durham's historic Carolina Theater. This instrument remained in use until Edgemont moved; when the congregation left Main St. the organ sadly could not be moved. Add this tidbit of Durham history to the lore of that magnificent building.

While looking for family

While looking for family info, I came across this website. I have a picture of the Sunday School class of 1941. Ladies known: Vergie Horton Weaver (my mother), Effie Bennett Monroe, Maggie Bennett Cockrell, Ruby, Katherine Whittbee [?], and teacher, Gladys Markham. There are 20 others ladies of whom I have no idea who they are. If anyone is interested in getting a copy, I'll try and figure out my printer/scanner.

Katrina, You may have

Katrina,
You may have posted your comment about the Edgemont Baptist Church Sundayschool class years ago, but I just read it. My family has deep Edgemont roots although we were members of Holloway St. Christian and later Holloway St. Baptist churches. So yes, I would love a print of the ladies class because I grew up around and loved many of the folks who were mbrs. there!
My e-mail is pwalters@sc.rr.com & phone # is 477-2681.
Thanks.
Paula Walters

What are the buildings to the

What are the buildings to the right of the church in the Edgemont Baptist, looking northeast, September 1960 photo? Were they part of a school? They seem to have been demolished.

Name correction:  It sould read Effie Bennet Moore, not Monroe. She was my mother and Maggie Bennett Cockrell was my aunt.  I grew up in Edgemont Baptist and was a member there for about 25 years.

It's the old Edgemont School.

It's the old Edgemont School. It burned down on Valentines Day, 1977. I attended that church from when I was a child until I was 22. How I miss the church and the people I grew up with there.

Effie Bennett Moore was my

Effie Bennett Moore was my mother, Maggie Cockrell; my aunt and it was Katheryn Whitaker; who was also my aunt. I grew up in this church and was married there in 1956 to my late wife.
It is sad to see that this building has been painted. I hope that the old organ is still intact. It was an old theater pipe organ..

I'm also disappointed. However, it is in the feedback regarding what and why something was done regarding this edifice of which probably none of the ones previously submitting their opinions currently attend.

You have no idea how difficult it is for a building to be declared an historical site if the support and aid necessary to have that process done are not being offered. I think the efforts to have what was suggested done would have been easier if some of the ones now offering negative opinions, of which one is entitled to have, would have offered support when the request was made to the city of Durham to indeed have the building declared a historical site; after all it is over 100 years old.

An invitation was also extended and yet remains to any of the former members of the old Edgemont congregation to return and fellowship with the current owners and congregation of this yet, "GREAT church" in the inner city of Durham. Which by the way edifice also happens to be in the center of the city of Durham. "Bet you didn't know that fact."

A good thing to see would be people coming together for the common goal of winning souls, serving and offering support to the community and city, and showing kindness to the less fortunate. All are welcome!

I can also understand the sadness in seeing things change and sympathize with you-- but as the Word of God states in the Book of Solomon, "...time and chance happens..." and thus, so does "change". However, it is the Word of God and His presence that remains the same yesterday, today, and forever. The presence of God yet resides at this edifice and that's what should matter, not whether or not the building changes. Because as one person mentions in her comments about the school that once existed beside the church and was destroyed by fire.

The next time that I visit your site, It will be a good thing to see that the comments thereon have taken on a different tone; being one of "support" so that the history that some commented about could move forward with positivity knowing that the initial work established by the old Edgemont Church is continuing, though the original congregation has changed. I will be more impressed and not saddened by negative comments about the church that I attend, serve, and love; more so reflective about the "people" because that's would make up the church.