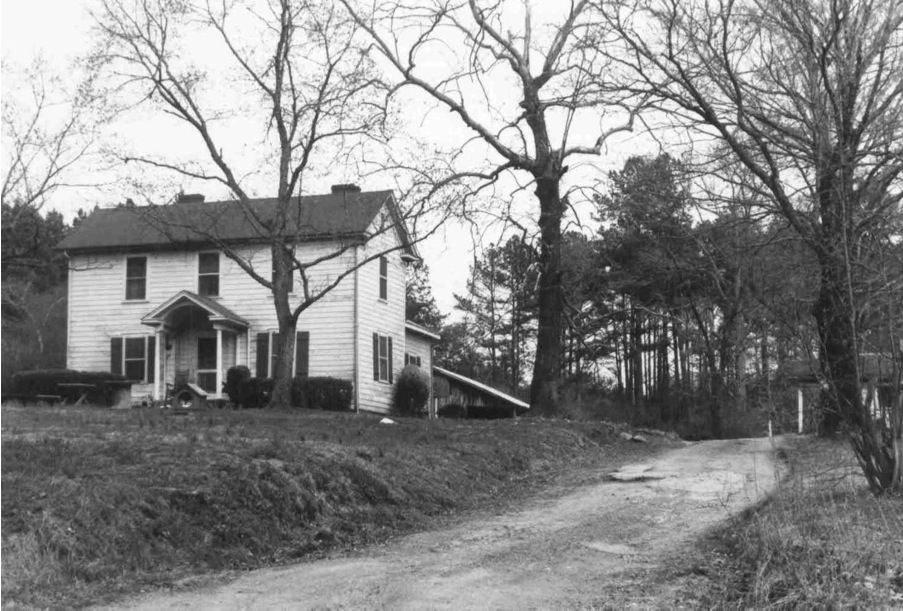 An intriguing inscription on the floor of a twentieth-century well house documents the history of a much-renovated frame I-house that was the antebellum home of William J. Duke, older brother of tobacco magnate, Washington Duke:

The dwelling’s basic form is that of a late nineteenth century I-house, a two-story gable-roofed structure with fenestration arranged symmetrically in three bays. Rear chimneys with corbelled caps date from the 1896 remodeling but German siding and a classic Georgian Revival entry stoop with an arched pediment are features typical of the 1930s and 40s. The interior follows a center hall plan and retains some late nineteenth century detailing that includes a Victorian mantel with applied turned colonettes, molded window and door surrounds, and a staircase with turned balusters and a shaped handrail. An unusual one-and-one-half story ell that spans the entire rear facade is of 1930s vintage though its recessed porch was later enclosed. Only the well house and a large frame barn remain from what must have been a larger farmstead.

William J. Duke was best known as a Methodist lay preacher whose booming rendition of the song “Old Ship of Zion” inspired congregations around eastern Orange County. At his death in 1883, the house and a portion of his land came to his daughter, Virginia, who later married J. E. Lyon. Their daughter, Rosa Lyon Belvin, inherited the property before 1936.