In an interesting continuation of the neo-historical development of East Campus, Bell Tower recreates an element of the original Trinity Campus - the belltower. Installed in the tower was the old Trinity College Bell - known as "Marse Jack" after President John Kilgo. 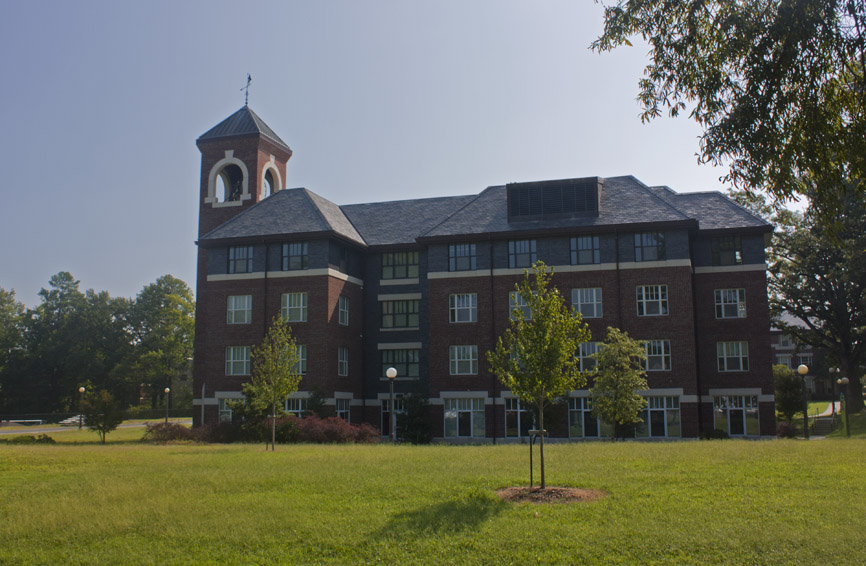 In an interesting continuation of the neo-historical development of East Campus, Bell Tower recreates an element of the original Trinity Campus - the belltower. Installed in the tower was the old Trinity College Bell - known as "Marse Jack" after President John Kilgo. Although Dixon repeatedly refers to the bell in this and other anecdotes as named after Kilgo due to students' fondness for him, I must say I have my doubts about their regard for the Bishop, and whether the reference was tongue-in-cheek. It's hard to imagine that the President who abolished football because he was personally insulted at a game and later, after he held no position at the College, attempted have a handful of sophomores expelled for raising a flag with their class year (it read, simply "'17") on the Trinity flagpole - and, if I understand the story correctly, attempted to deny that entire class their diplomas later when the class denied him a written apology - was held in such high regard. But that's only my speculation.

Wyatt Dixon recounted the long history of the bell and Trinity College in the 1970s.

Out on the East Campus of Duke University, close by the few remaining buildings of the Old Trinity Park High School and later used by the School of Engineering, stands an almost forgotten relic of Trinity College. It is the 'Marse Jack' bell, known by many as the victory bell, that for many years played an important role in campus life.

Today, few students know about the bell for its voice has been silenced for many years through the removal and storage of its clapper. The bell replaced the original one that occupied the tower of the Washington Duke administration building. The building and bell were destroyed by fire in the early part of 1911. Little time was lost after the destruction of the old bell in replacing it with a new one. On June 22. 1911, a new bell was presented to the college by Benjamin N. Duke. It was named the 'Marse Jack' bell in honor of Dr. John C. Kilgo, who served as president of the college for many years. He was held in high esteem by faculty and students, and the first 50 strokes of the bell were sounded on the occasion of his 50th birthday. Kilgo resigned his position to accept appointment to the office of bishop of the Methodist denomination. It occupied a tall wooden tower that was located near the Crowell Science building that later became the dope shop.

The bell, made by McNeely & Co., of West Troy, N.Y., was described in a newspaper article on its presentation and dedication as being. the largest bell in the south. For many years it was rung every hour and at sundown every day. At sunset on the last day of commencement it would ring out as the outgoing class lowered the nation's flag that flew in front of Craven Memorial Hall. It also was used to wake the students In the morning as well Ito call them to chapel and other special services and events. Trinity’s victories on the athletic field were the occasion for loud and long ringing of the bell as part of the students celebration. 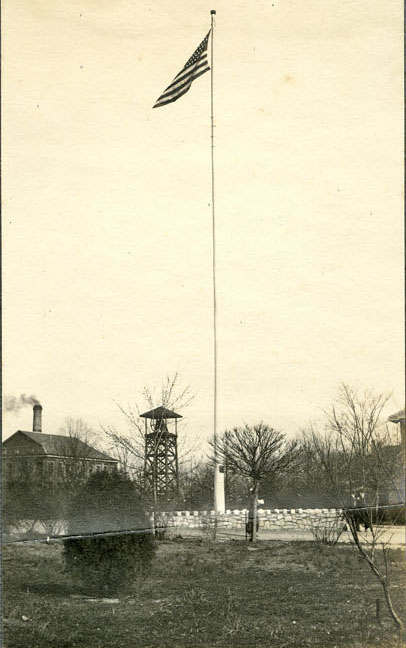 The flagpole in front of Craven, with the wood frame tower holding the bell in the background.

With the creation of Duke University, the new buildings were equipped with an electric bell system and ‘Marse Jack’ was no longer a necessity. During the 1950s the bell became a nuisance, both to residents of the campus and to people living within the sound of its voice, by the ringing of the bell at ungodly morning hours by student pranksters. In meeting the situation, the bell’s clapper was removed and placed in storage.

The bell has occupied three towers. The first one was a tall wooden structure. In time it rotted and another smaller tower replaced It. It, too, gradually rotted and a new one was needed. Something had to be done, so the woman’s class of 1933 entered the scene. Funds were raised and the present steel tower was provided. The tower was presented formally to the college with appropriate ceremony on Monday night. June 5, 1933 […]

The bell and tower were cared for by students of the engineering school until they moved to their new quarters on the West Campus. They offered to continue to care for it II the bell was moved near the engineering school. The dean at the time wanted it moved to the area of the indoor stadium. No one offered to care for it on the East Campus. The senior class of the woman’s college of 1933 looked with strong disfavor on attempts made to remove the bell from East Campus, and waged a determined fight against them. Members of the class at a meeting in observance of the class’ 25th anniversary went on record opposing "the efforts that continue to arise to move old “Marse Jack” from its traditional place on the East Campus."

“[They] strongly believed that the bell should remain on East Campus – “the very name of the bell is a tie to old Trinity. It was [their] class that presented the steel tower for the bell and [they] felt that it would be rather unfitting that a memorial gift from a class of the woman’s college should ever be allowed to be moved to the West Campus.”

As the picture now stands, the old bell remains in a remote section of the East Campus where it has no role in campus life. In fact, many students queried about it during the writer’s visit to the campus had little knowledge about the bell or its location. Whether it will ever regain any of its lost glory, only time will tell. 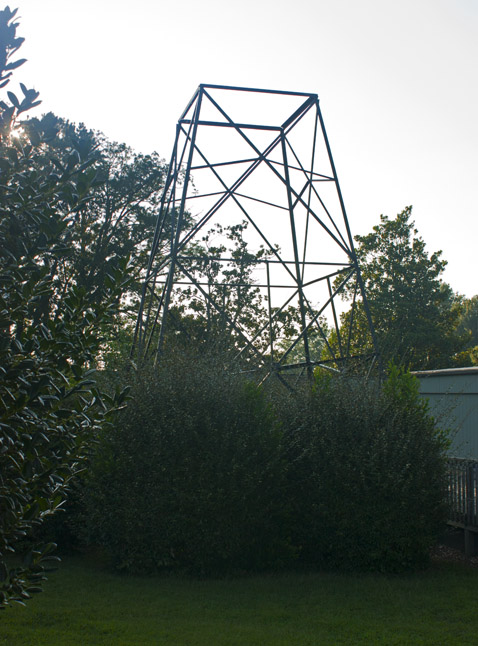 Belltower dormitory, with 'Marse Jack' installed in the tower, 08.22.10