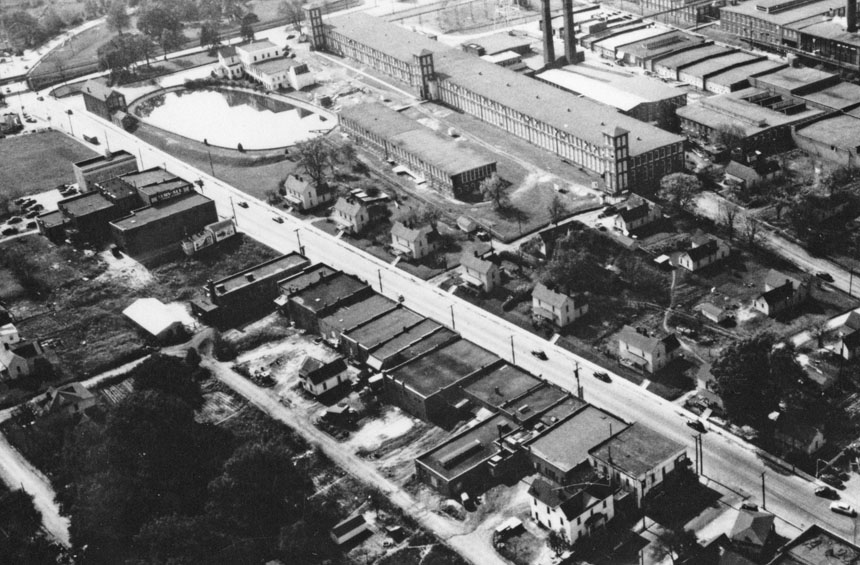 Among the earliest mill houses built by the Erwin Mill was a series of houses built along the west side of Ninth Street, extending northward from the company store. The houses were identical two-story, side-gabled frame houses typical of mill house construction in North Carolina. 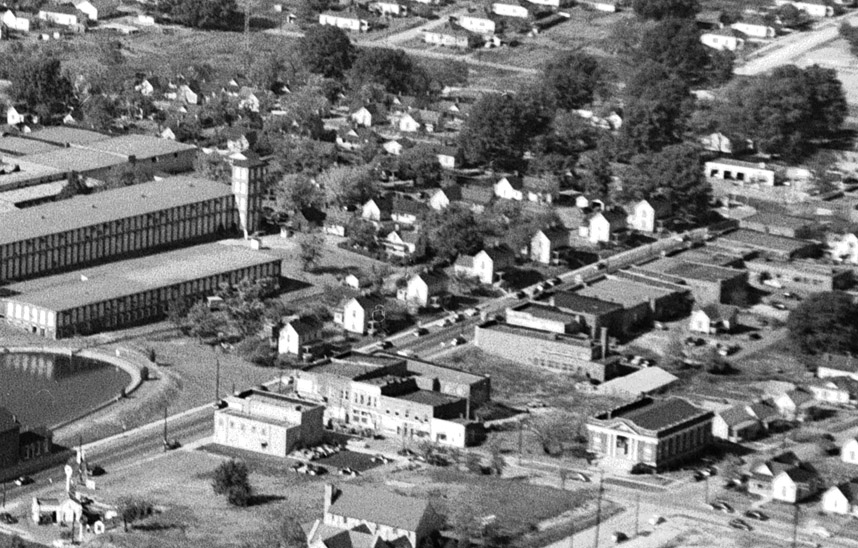 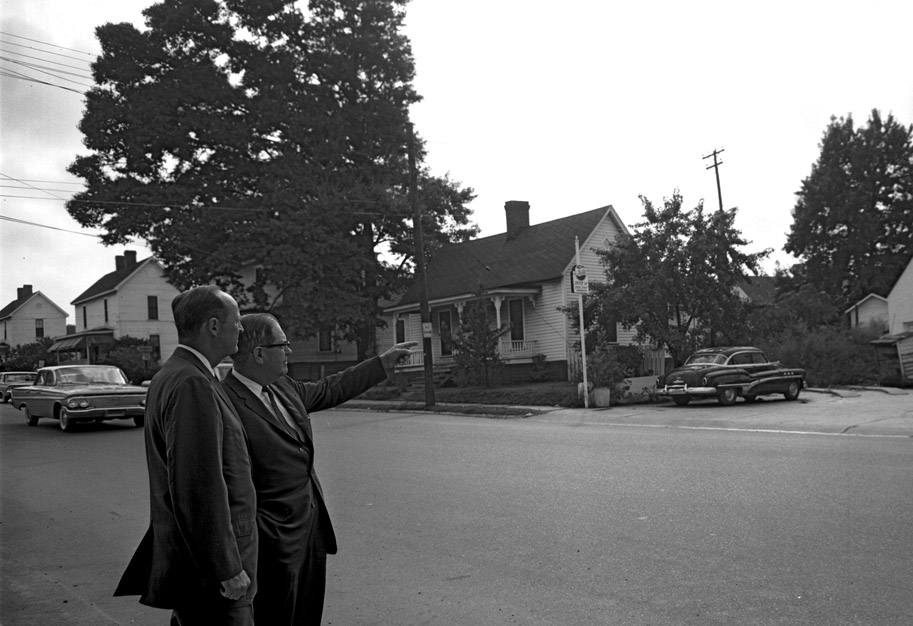 Looking southwest from the northeast corner of the intersection of Markham and 9th, 09.27.62. Because Markham and Hillsborough did not align, the present-day roadway would run straight through the single story house in the background.
(Courtesy The Herald-Sun Newspaper) 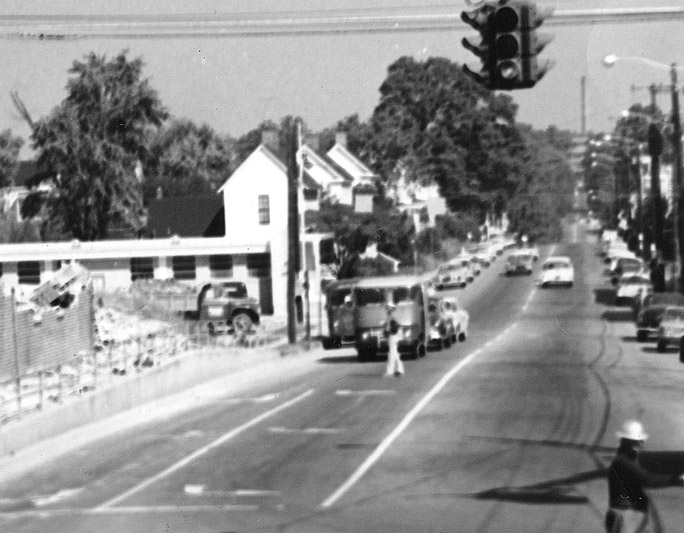 1968 view north on 9th Street, with the row of houses visible on the left side.
(Courtesy Duke Rare Book and Manuscript Collection)

I'm not sure exactly when these houses were torn down, but it appears to have been done in a wholesale fashion, leading me to believe that either Erwin Mill/Burlington Industries or the city had something to do with it. My best guess is that it was done between 1968 and 1970.

This surface parking and retail facing the interior parking lot, turning its back on the corner, were developed in the 1980s. Given its ongoing ownership (even the city-leased lot) by Terry Sanford and Clay Hamner's SEHED real estate investment/development group, which also owns Erwin Square, I presumed that it was developed contemporaneously with the Erwin Mill redevelopment / Erwin Square construction.

By 1988, the most notable tenant in the streetphobic development was Wellspring Grocery, which expanded to the location from their previous tenancy in the former Wright/Scarboro Grocery building at 1002 Ninth Street, now occupied by Magnolia Grill. Once Wellpsring moved to the former A&P on Broad St., a few blocks away, George Bakatsias began building a new restaurant empire (after the collapse of his first one,) with the construction of George's Garage in the space ~1996.

Kerr drugstore took up much of the remainder of the structure; they shut down a few years ago and that space has remained vacant. George's Garage vacated its space just a month ago, when the restaurant's lease was not renewed. The building is now empty, and the associated parking cordoned off. 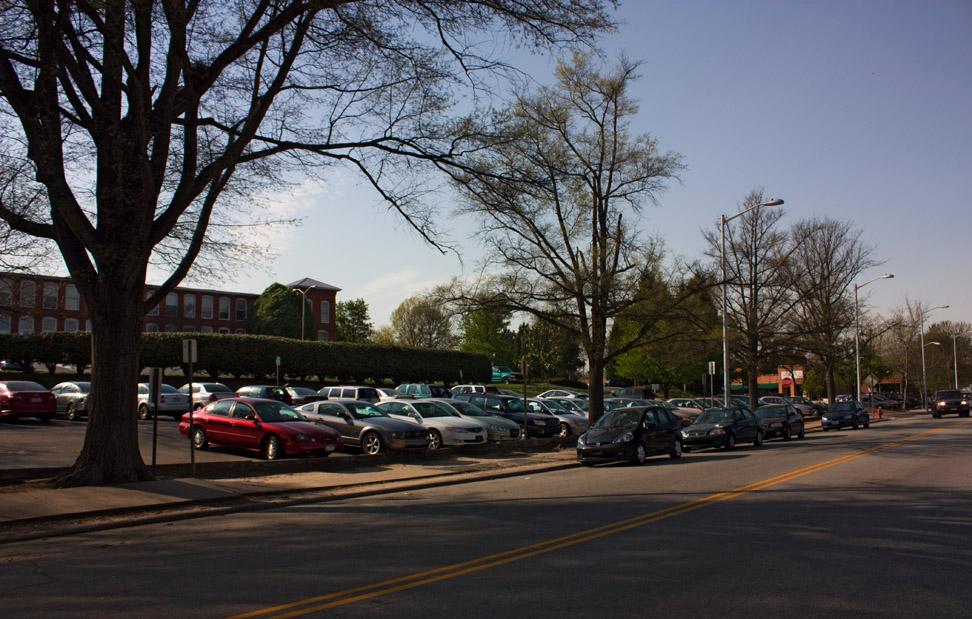 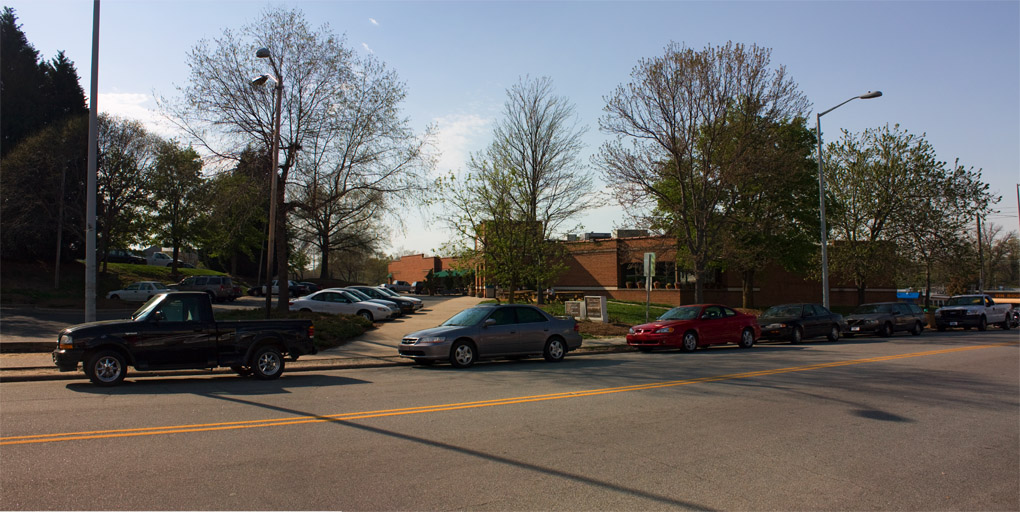 One of the most squandered corners in Durham, looking southwest, 08.07.09

I hope this means a better architectural future for this entire strip is at hand. The long strip of surface parking, terminated with a suburban style retail structure that faces away from the energy of 9th Street is an incredibly underwhelming use for real estate that has the potential to finally make the core of 9th street a two-sided pedestrian-scale retail frontage. (A situation that is incredibly, strangely absent throughout Durham - except perhaps at 'Main Street' at Southpoint.)

The original renderings for a redevelopment of this area in 2013 looked somewhat promising, but ultimately, it's a lost opportunity. The best thing I can say about it is that the developer has created a patio frontage on Ninth Street and Hillsborough to improve the corner above. But the rest is straight out of a suburban template - dominated by a terrible Harris Teeter with large surface parking lot. I would guess that they demanded that this site be bent to their will, i.e., a huge surface parking lot in front with visibility from Ninth Street (and a blank wall to Hillsborough Road.) The opportunity was at hand to enhance the architectural experience on Ninth Street by double-siding the street frontage. As it is, the surburban feel of the west side of the street has been exacerbated, and the chance to create an integration between Station 9 / Erwin Square and the historic area was squandered.

09.26.13 - if you squint, you can barely make out a Harris Teeter behind an ocean of parking. I am sure a massive sign will soon help identification. (Photo by G. Kueber)

Had some good times at the

Had some good times at the Garage! Latest rumor is that a CVS pharmacy is going there...

Was there any reason why most

Was there any reason why most mill houses were single-story, while these few were two story? E.g., were these for supervisors or white collar mill employees?

I second anonymous comment #2. The Chevy whose headlights are obscured by the man's shoulder is a 1961.

Rumor has it that George's

Rumor has it that George's moved out because someone had some plans for knocking the thing over. I suppose that's a good thing, but I really do like the interesting brickwork in this building.

The memory is very fuzzy, but

The memory is very fuzzy, but I seem to remember from the early 80s, when Wellspring was in the building at 9th and Markham, that the store faced out towards the corner, in an older building. It changed sometime between ~1983 and 1991 (when I did not leave in the area). Sorta weird, trying to scare up those memories - wish I had some photos....

I was also wondering why the

I was also wondering why the two-story larger houses were there and if they were "special." John Schelp, you must have the answer to this one.

I can tell you that it was impossible to try and shop on Ninth Street, before the surface off-street parking was added on the west side. Before then, you could not find a parking place anywhere.

I kind of like the empty green space behind the street-phobic building at Ninth & Markham. It could use some flowers or a park bench to brighten it up, but there is just too little green space around.

What a nice spot for a park.

What a nice spot for a park.

The two-story mill houses on

The two-story mill houses on Ninth Street have stories to tell.

Mary Cole lived in a two-story mill house at Ninth and Stack (today the mid-block entrance to the parking lot across from the Regulator and Dain's Place). Mary and her husband ran the famous billiard parlor on Ninth Street. Many neighborhood kids were instructed not to go inside. Too much fighting and misbehaving going on (when he was younger, pharmacist John McDonald told me he had to break up a fight or two)...

Mary and I were walking down Ninth recently and she was telling me about all the old stores. 90 years young, she was excited and talking up a storm. I then brought Mary into her old billiard parlor and made introductions. We looked at the old tin ceiling and wood floors. I walked out thinking to myself -- what a wonderful moment!

But Mary was quiet. Very quiet. By the time we got to the Playhouse Toy Store, I asked if everything was alright. Mary paused, looked at me and said, "Well, I've never been in a tattoo parlor before."

Don Schlitz wrote 'The Gambler' (recorded by Kenny Rogers). It's considered among the top-25 Western songs of all time. His mom worked for the mills and his family lived in a two-story mill house on Ninth Street, near where Specs is today. (Since Elvis Presley and John D Loudermilk also lived in West Durham, our little neighborhood can claim ties to Western, Country and Rock & Roll.) :)

Longtime residents of West Durham have offered various reasons for the different sizes and shapes of the mill houses. The larger ones went to foremen and others in supervisory positions. But, maintaining the workforce was also important for the company. So larger families were given larger houses.

When Erwin Mills cleared the woods to built Mill No 1, they set up a saw mill to cut the planks to build the first mill houses.

If you drive around Cooleemee and Erwin, NC, things might look familiar. Erwin Mills #2, 3, and 5 are there. Many of the mill houses look like the houses in West Durham. Some of the street names are the same as well.

Here's an except about the mill houses on the Old West Durham site, penned by OWD friend, Charlie Carden...

> It was not unusual to receive a notice to move when you lived in one of Erwin Mill's houses on Mill Hill or in Monkey Bottom in West Durham, N.C... You have to remember... the houses were owned by the Mill, and you lived in the Mill's houses at the mercy of the Mill.

Often, when these houses would get into ill repair, they would move families to another Mill house, while they repaired the one that you and your family were in... Sometimes, the Mill would just tear down a house that had gone beyond repair.

One of my fondest memories, as a child, was when a house, scheduled for demolition, would become vacant. My brothers and I and the children in the neighborhood would play in the houses, and we had the best of times! We played Store, we played Army, or we pretended these treasures were Our Castles, and, literally, we just let our imaginations run wild.

Although we would be sad when the houses began to be demolished, this just sent a signal that a newer and greater adventure would soon occur. As the demolition teams began to tear down the houses, us children would scavenge the boards, and with our Daddy's old saw and hammer, we would use the boards to build a clubhouse or a fort of our own... No Girls Allowed!

All day long, we would work like ants moving the boards to my house, removing the old rusty nails, only to straighten them out again for re-use, and we would build our new Citadel... Gosh... what great times!

Here's a pic I shot of this