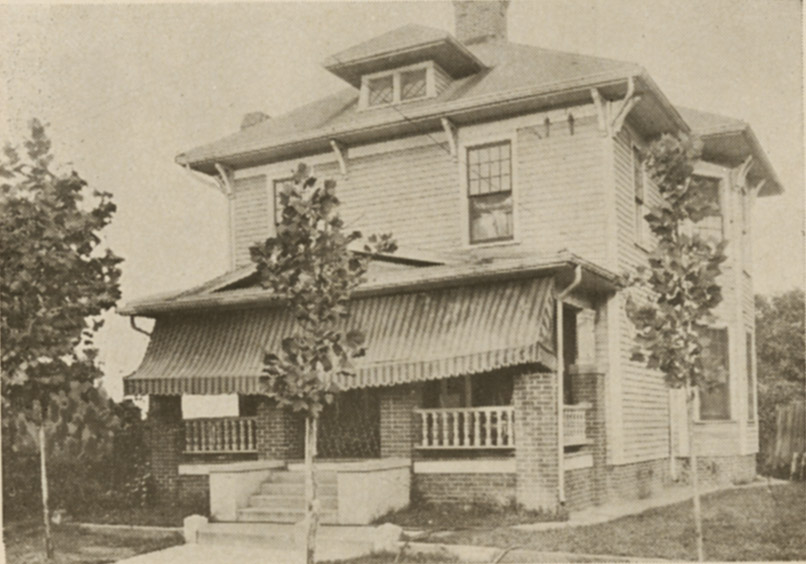 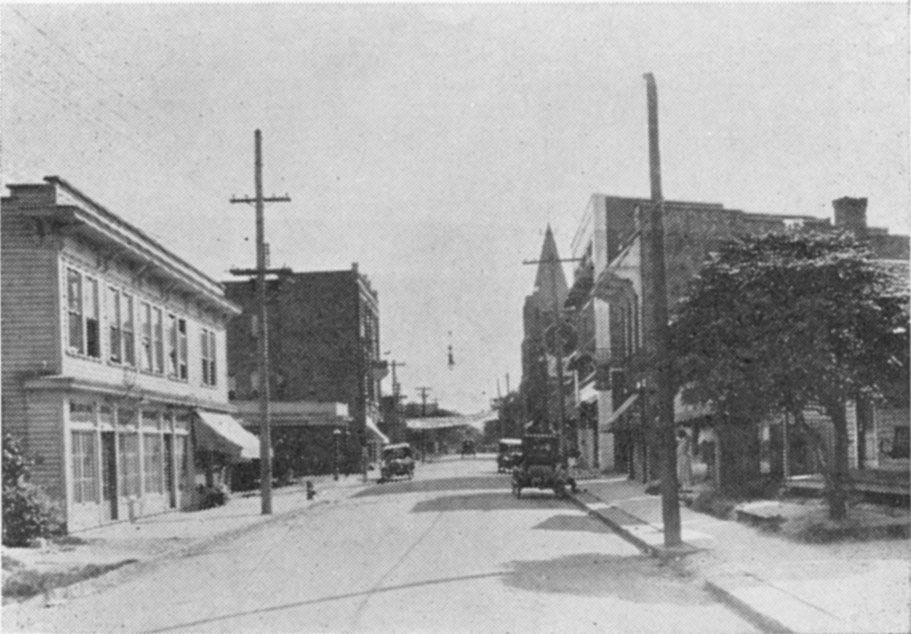 Looking south on Fayetteville St. from the middle of the 600 block, 1922. (S.) Elm St. is the intersection ahead and the transition to the 700 block. The east side of the 600 block would include the building on the left.
(Courtesy Duke Rare Book and Manuscript Collection. Scanned by Digital Durham.)

The east side of the 600 block of Fayetteville St. has been a difficult area to document - the photographic record is circumstantial and/or incomplete.

Between St. Joseph St. and Mobile Avenue, the religious and commercial core of Hayti developed during the late 1800s and early 1900s. The 600 block developed into an exclusively commercial corridor on the west side of the street, and a mixture of primarily residential and minimally commercial uses on the east side. The houses were considered a part of the 'Sugar Hill' residential area of Hayti, larger houses of the more economically well-off members of the Hayti community.

By 1923, the residents of the east side of the block were:

The corner of S. Elm and Fayetteville St. was commercial, with the Electric Shoe Shop at 615 Fayetteville and the Great A&P Tea Company at 617. This is likely the building pictured on the left in the above picture.

Richard L. McDougald was born in Columbus, NC and graduated from now-North Carolina Central University. He was a bookkeeper at the Mechanics and Farmers Bank, started the Mutual Building and Loan Association in 1921, a real estate company that aimed to improve African-American home ownership. In 1922, the Merrick-Moore-Spaulding real estate company reorganized and added McDougald as a partner; the new venture was renamed Merrick-McDougald-Wilson, and managed the NC Mutual company's real estate.

McDougald would also be instrumental in the creation of The Carolina Times, loaning Louis Austin the money to purchase The Standard Advertiser and recast the paper as a forceful societal commentary.

McDougald died in 1944; his advocacy for better living conditions for African-Americans would result in the 1953 housing project on Lawson St. being named McDougald Terrace in his honor. Ah, irony. But it is a good insight into how genuinely most people believed that the housing projects would be a wonderful thing, delivering people from the shanty houses and dirty streets of impoverished Durham.

The block would become more commercial over the course of the 20th century. By the 1940s, one of Durham's earliest Chinese restaurants (along with The Oriental, the Asia Cafe - run by Hughy Wong, opened at 611 Fayetteville St. Other businesses included the Citizens Jewelry Shop, Service Taylor Shop, Eagle Sport Shop, and the Deluxe Barber Shop at the corner of S. Elm and Fayetteville. 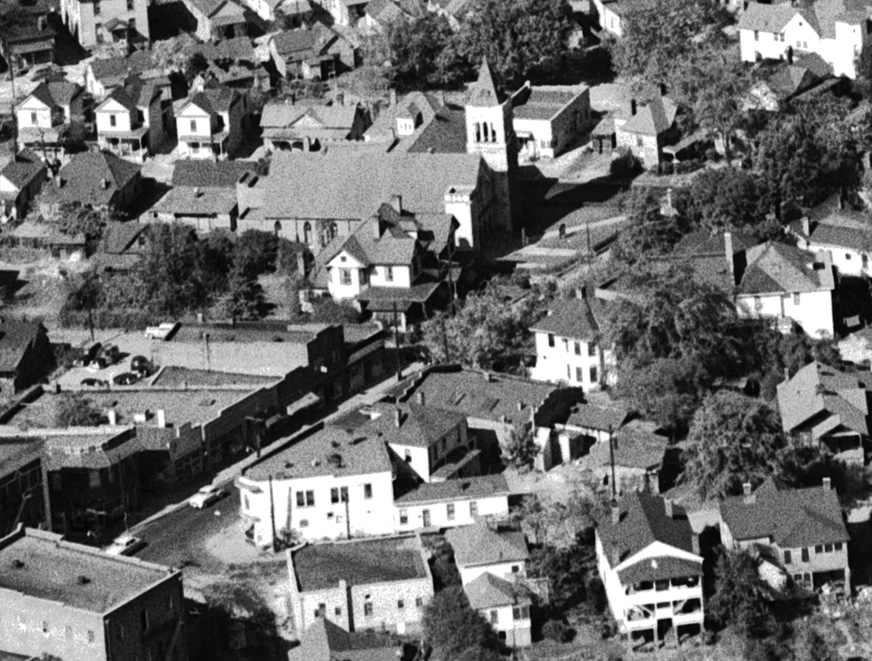 By 1957, the 'curved-corner' building was torn down and replaced with a drive-through branch of Mechanics and Farmers Bank. 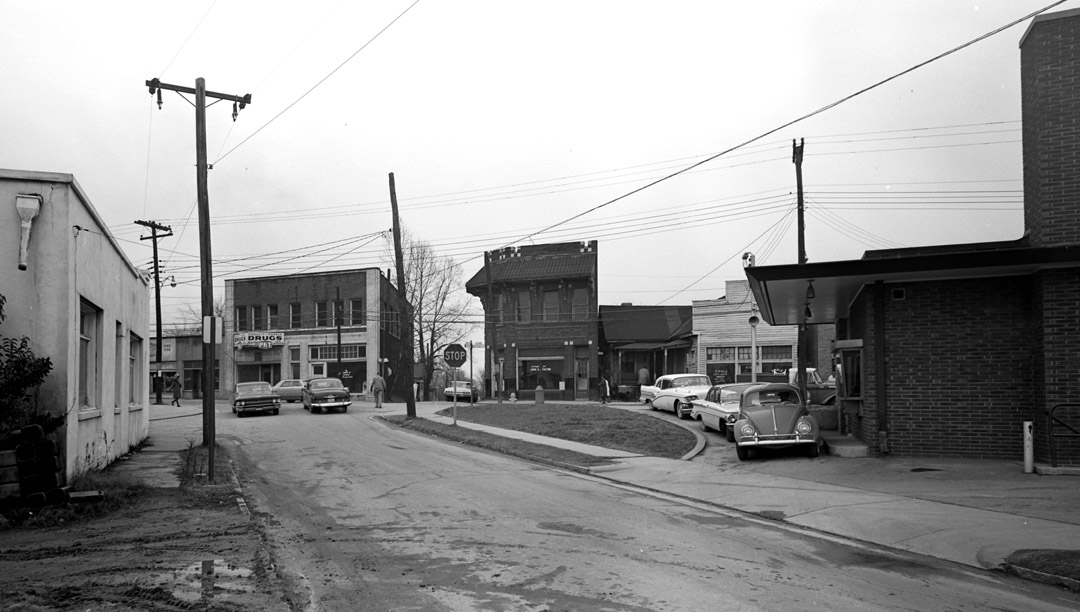 Looking southwest on S. Elm St. towards the intersection of Fayetteville, S. Elm, and Whitted, 01.05.67. The bank is to the right. (Courtesy Durham County Library / North Carolina Collection)

By the mid-1960s, urban renewal had begun tearing down this block. 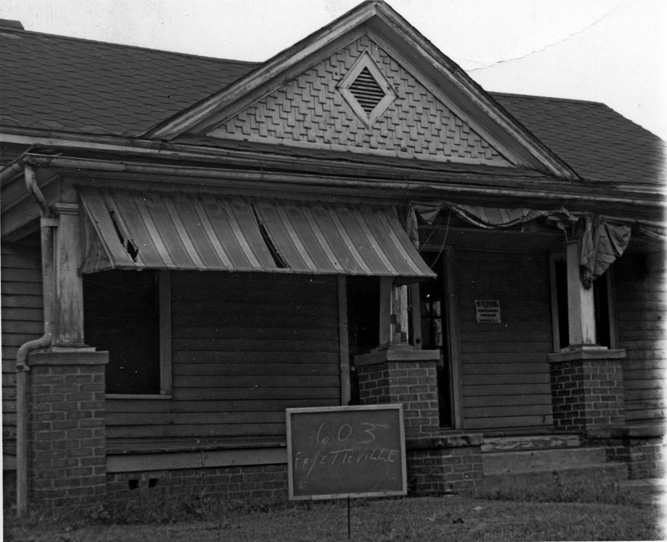 The southern end of the block persisted in some form until the late 1960s, but seems to have been effectively eliminated by the early 1970s.

Location of the east side of the 600 block of Fayetteville, 10.05.08. The southern end of the block would have been around the new EMS station visible to the right.

One thing I hadn't

One thing I hadn't appreciated before this latest round of posts was the sheer amount of urban fabric that disappeared with Hayti. I'd always that the old business district was what went away, but I'm realizing with this that a huge set of neighborhoods and multiple business districts disappeared, and that what's replaced it is two mediocre shopping centers and Rolling Hills.

I always knew it was bad, but this is on a scale I didn't imagine.