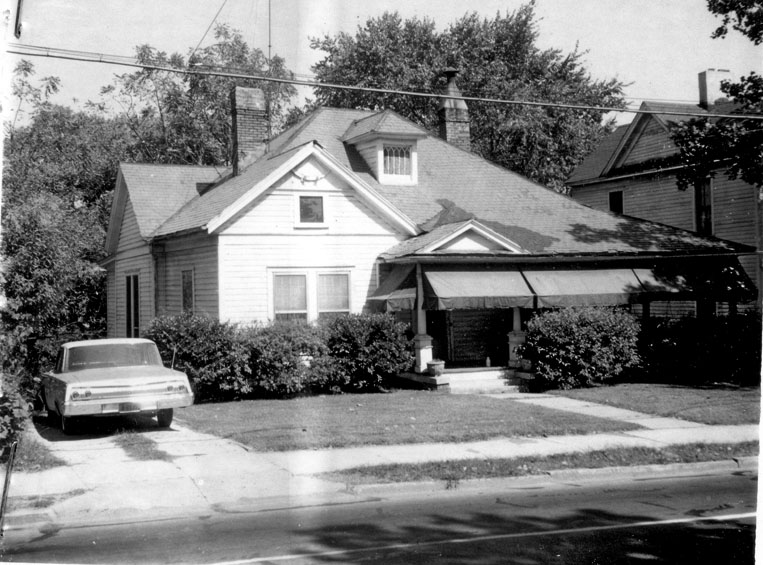 605 Holloway was likely built sometime between the 1880s and 1910 - although the Sanborn maps do not cover this area until 1913, the first date I can confirm its existence. As with most of Holloway St., it was one of the nicer houses along the trolley line, and remained so long after the demise of the trolley, as the 1964 picture shows.

Holloway St. began to struggle in the 1960s and 1970s after urban renewal, and the widening of Elizabeth St. separated this block from the western remainder of the neighborhood.

By 1990s, though, the house was still in reasonable shape. 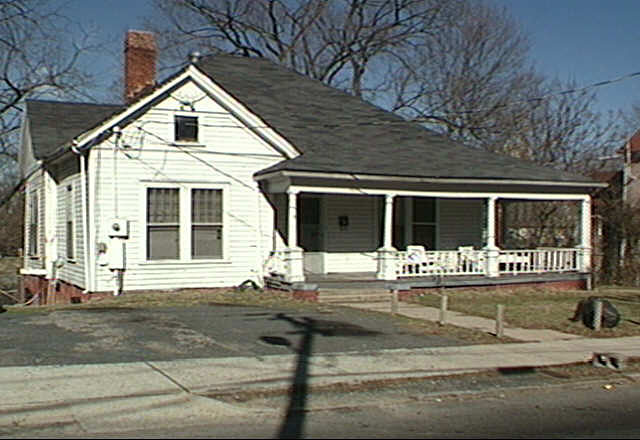 Longtime readers may recognize that I did this house as one of my very first posts last year. At that time, I noted that Durham County owned the property, which they acquired through foreclosure, and that it was deteriorating. 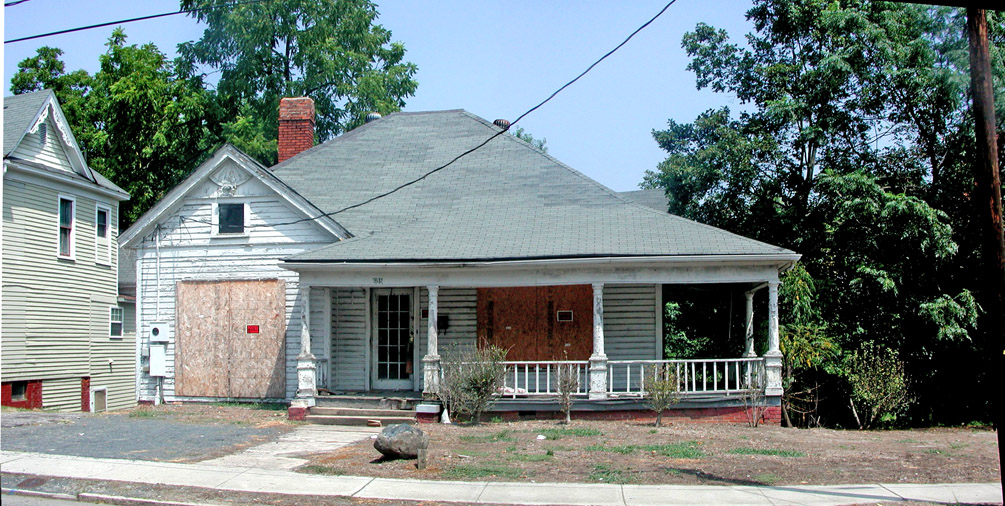 The county had "For Sale" sign for quite awhile (a progressive step.) It was sold to Howard Goldsmith of Baldwin Estates, LLC - with an address in New York - in May, for $20,000.

Last weekend, I was making my rounds taking pictures, when I noticed something was missing. 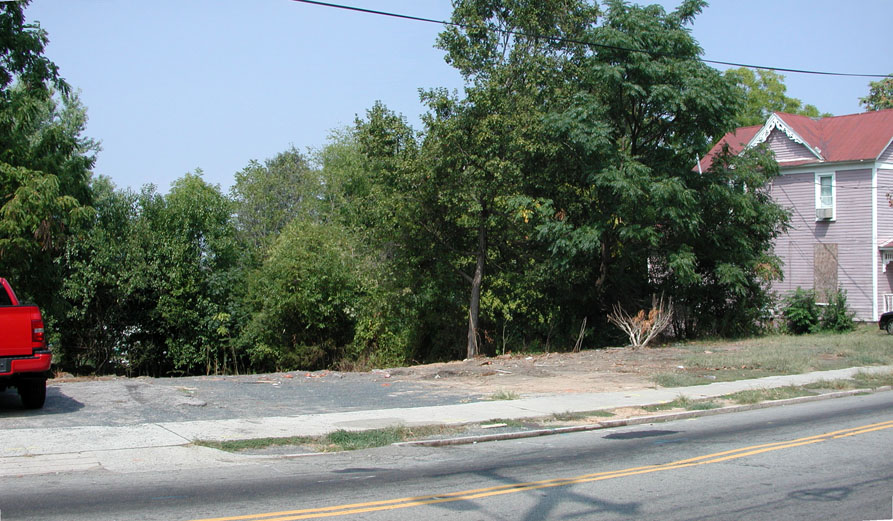 It appears that this occurred within the last 7-10 days.

What a waste. This is in a local historic district, so I'm not sure if someone received approval to tear this down or not. I'm not sure who tore it down. What I do know is that the county missed an opportunity to improve this neighborhood. At a minimum, they could have sold the property with covenants through Preservation Durham to ensure the property was renovated/maintained. But this strikes me as a perfect property for a homesteading-type program. It is is in a local historic district - offer it for the cost of administrative fees to a homeowner who demonstrates ability to restore and contractually agrees to do so.

Or something - anything - positive for this community. Both the county and the city throw up their hands and say "there is nothing we can do" about neglectful property owners like Fireball White. But when the city and county have property control, they are squandering the opportunities to genuinely improve neighborhoods. Rather, they take generic approaches that ignore the neighborhood context - over and over again.

Update 9/7: 9am: I've just heard back from the planning department that the owner demolished the property without required Historic Preservation Commission approval. While the original materials and craftsmanship of the property cannot be replaced, I hope that the planning department finds the will to go after this property owner full bore. They should be required to construct an exact reproduction of the house. Anything less would be an affront to the time and effort people have invested in creating a historic district.

Can you find exactly what the legal penalties/options the HPC has in a case like this? If it is something that requires effort on Steve Cruse's part, be certain not to create many expectations. By the way, when can Durham get a preservation planner that takes ownership of these local historic districts? I know the HPC has certain responsibilities in a case like this, but this is the planner's full time job, right? The HPC folks are volunteers.

The HPC folks are volunteers, as with many commissions/boards in Durham. You are right that this is Steve's full-time job. I thought it was important to clarify what I feel the public should expect in the way of stewardship for its historic districts from city/county gov't. We need a proactive approach, identification of new potential districts, preservation planning, vigilance, information, etc. It requires a lot of work, staff, and passion to do this right.

I find it difficult to ascertain what exactly the HPC can do. There is not much exploration of pushing the envelope, as far as I can tell, so many answers seem to be about what the HPC can't do rather than what is possible. I did not feel like Frank Duke provided a push to improve HD stewardship from the top.

For instance, the demolition by neglect ordinance had never been utilized until I initiated it for 520 Holloway in 12/06. After 9 months, there still has been no finding as to whether 520 Holloway constitutes Demolition-by-Neglect (on what I would consider the least controversial case of DBN possible.)

Places like Trinity Park recoil in fear when local historic districts are mentioned (someone might delay their ability tear down their house if they feel like it.) But if people can simply get away with tearing down important historic structures, what is there to fear?

Thanks for this (sad) post. Your note on "build an exact reproduction" brings up a question: my (limited) understanding on the prevalent philosophy of historic districts was that new construction (including expansions but not renovations) should harmonize with but not be the same as existing, historic buildings. The idea being that someone coming through should be able to know which buildings are "originals", and which ones are new.

Perhaps I've been listening to a minority opinion on design philosophy? Your response would be appreciated.

Excellent point - that is one of the competing philosophies in historic preservation.

My feeling is this: where a reproduction completes a damaged whole, it is acceptable - even advisable. But when it becomes disney-esque reproductions of entire villages/streets, it simply becomes too fake. Williamsburg crosses this line for me.

Another example would be the Old Cigarette Factory at Liggett. The top of the building was chopped off in the 1940s. As such, it is a shadow of its former architectural glory. I would have liked the demolished portion of the building to be rebuilt to 're-complete' the building.

The National Park Service, which oversees Federal tax credits, has a very different philosophy - which is what you have articulated. Reproduction gives a "false sense of history" and should not be done. Additions to historic buildings should not match the style of the original building to any extent that one might think that it could be part of the original.

I think this is too purist for me, and treats the buildings as isolated relics rather than part of a neighborhood. One difficulty in historic preservation is that there is both a design element and a historical element. This is an area where I feel they conflict - sometimes design calls for reunifying a building or streetscape where 'history' would demand that every age should be distinctive.

My impulse to have an exact replica rebuilt is, honestly, when I think about it, likely motivated more out of a desire to punish the owner by making him rebuild exactly what he has just torn down. How do we appropriately punish this owner for what he has stolen from us as a community?

But I do think that the historic district demands a new structure that does not disrupt the flow of the district, and is thus of a contextual historical style. Despite the sneers of the architectural academy for what they see as 'historicism', it is important for buildings in a historic district to bolster the district - not diminish or distract.

I agree almost completely with you on this. I find the Park Service's notions absurd, and they ignore the fact that many of the very buildings we are now trying to save are themselves imitations of earlier styles. Look around Durham. See any Gothic Revival architecture? See any Georgian Revival? And that's before you even get off the Duke Campus. We've got Greek Revival banks, neo-Tudor cottages, Renaissance Revival, Spanish Colonial and Colonial Revival houses, just to name a few of the more common ones. These are all imitations of something else, but we are not allowed to continue the imitative style? I have a 1925 Colonial Revival bungalow. If I want to expand it, how am I supposed to do that? Stick a garage out front in the 2007 "condo-community" style so everyone will know when it was added? My house was designed as an imitations (and there is nothing wrong with that; few things are original) because people found the style attractive. If we also think it's attractive we can 1)preserve it and 2) respect the original aesthetic by not adding something that clashes with it. I'm not a purist, and I like a lot of modern architecture. I don't mind a modern house (if it's interesting) in an historic neighborhood. But sticking two widely different styles on the same building is just plain ugly.

The saddest thing I can say about places like Williamsburg is my inevitable thought that people ought to be actually living there. I feel the same way when I go through any historic house that's been turned into a museum: I'm glad it's been saved, and I'm glad I can see it, but dammit, people should be living here.

I think if Williamsburg was lived in, I might like it better as well. And it serves its purpose as a teaching tool, etc. But the 'stasis' piece of it feels off-putting to me - every building is kept in the same state - nothing looks particularly older or newer, etc. It's the same feeling I get in manicured HOA conformed suburbia. I don't think this would be the case if it were a real town.

I realize the Williamsburg

I realize the Williamsburg site is supposed to be a historical one, but it's still kind of creepy in a way.

We were at Seeds on Sunday

We were at Seeds on Sunday 9/2 and the lot had been grazed. We were at the back pavilion and thought, huh, something doesn't look right...

I'd really like to know what the penalty is. I want to push for this to hurt.

Is a permit issued by the

Is a permit issued by the city not required in order to raze a building? I assume that he hired a contractor to demolish the home and haul it away. That is, unless he rented his own bulldozer.

I would hope that the

I would hope that the contractors who tear down historic buildings can enjoy historic penalties. This should be doable, in a real city that requires permits for this sort of work. And of course the property owner is on record.