This small but actively inhabited masonry brick building has had everything from Auto loans to Magic Touch Massage to Irish Bar through its pair of front doors. 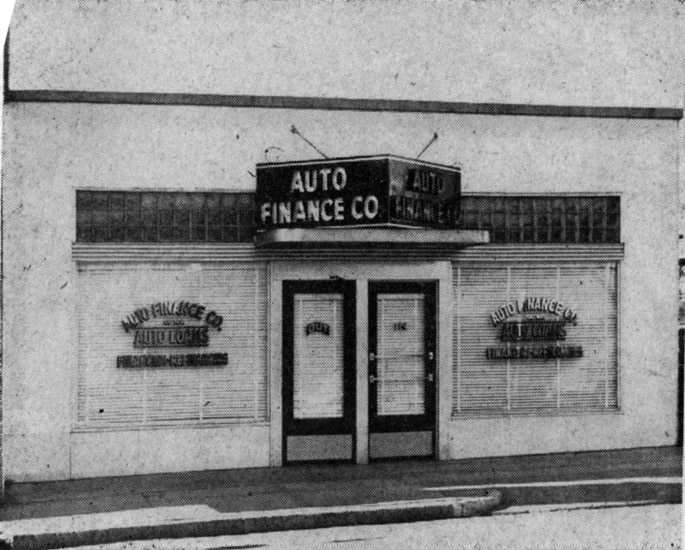 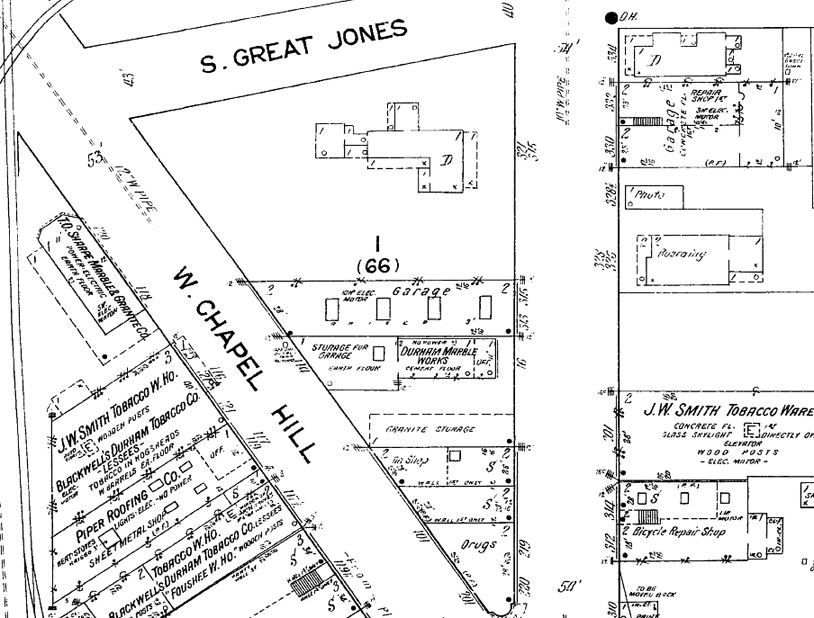 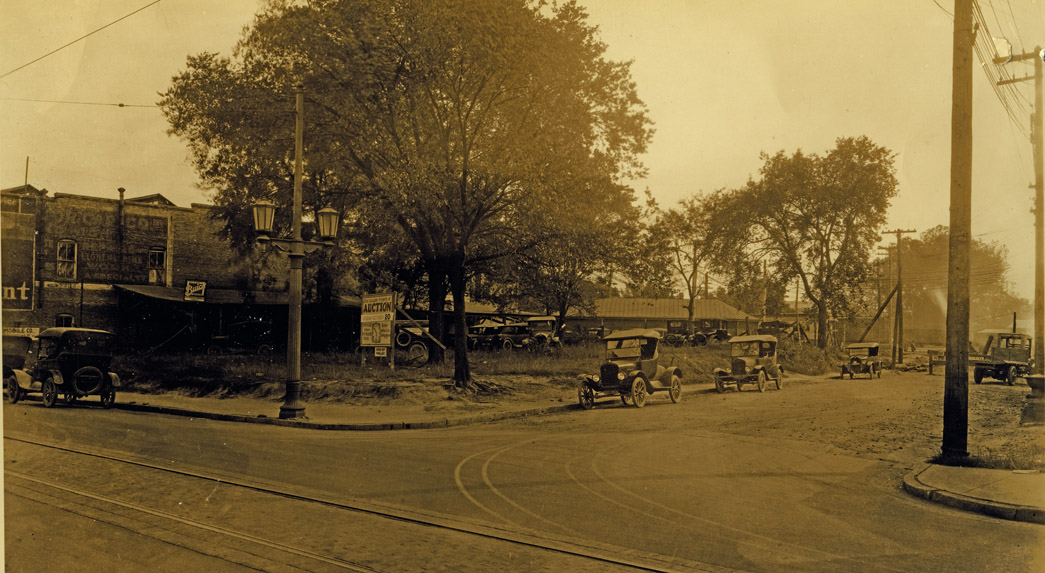 The land was eventually subdivided into three parcels, two gas stations and a small commercial building.

By 1949, the little building housed the Auto Finance Company 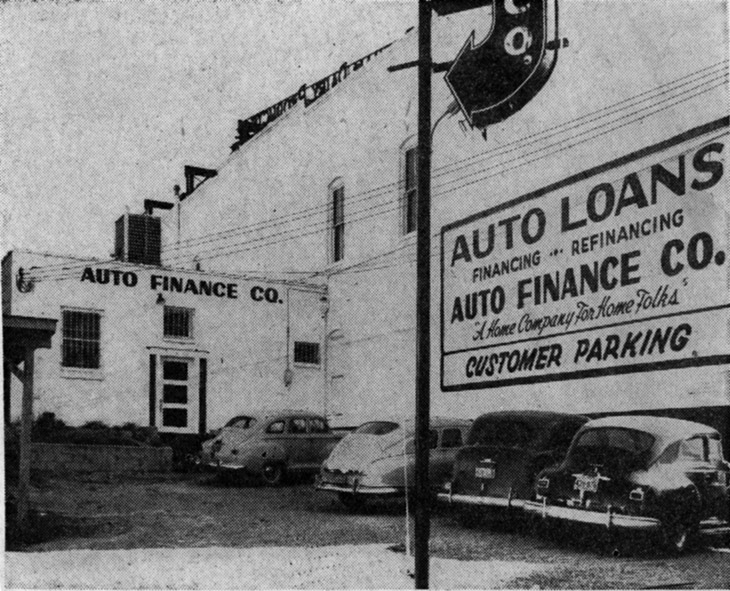 The rear of the building (from West Chapel Hill St., 1949 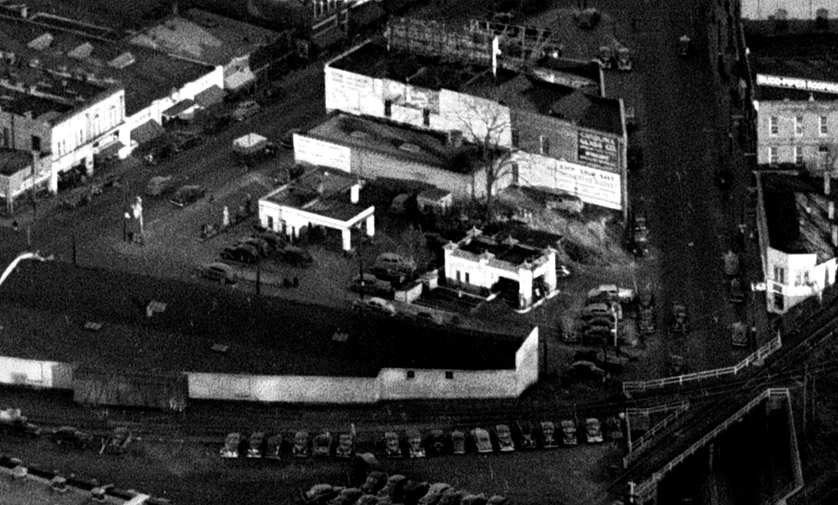 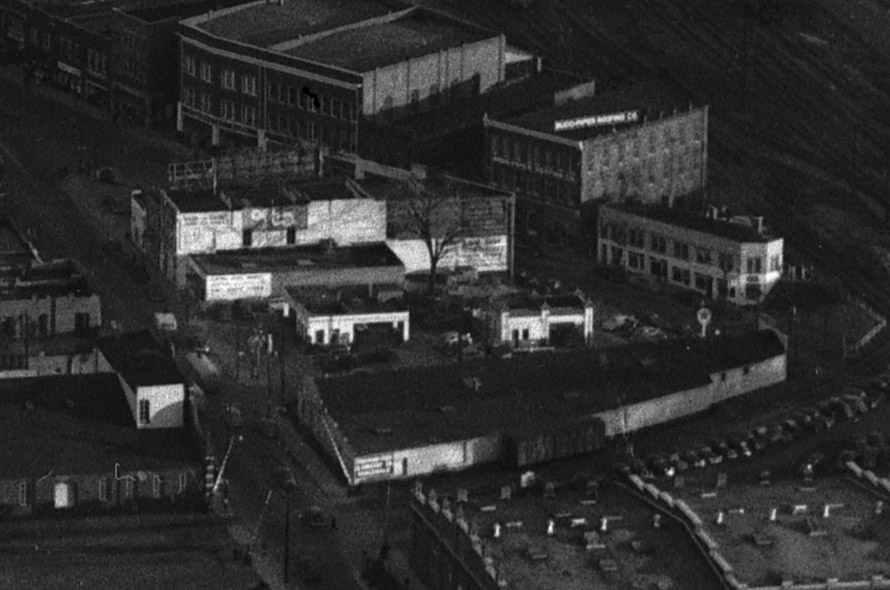 The small commercial building, which, if you can read the sign, says "Christian - Music, Bookstore, Bibles" was just to the east of the McDade-Ward Philips 66 station. 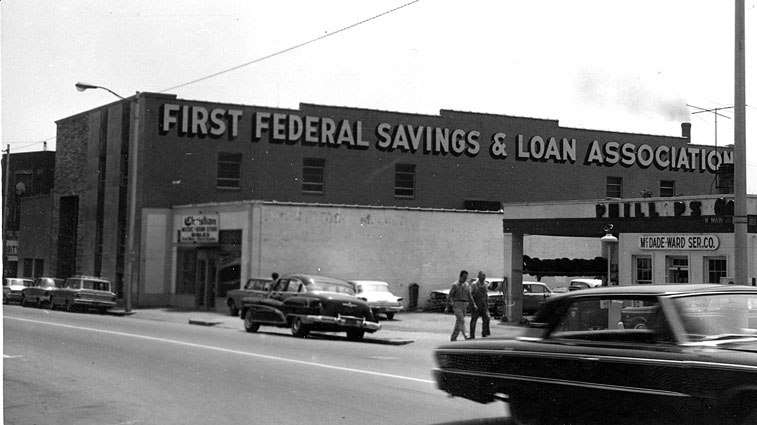 I have to say, I found this pretty funny when I discovered the picture, considering the revelry and spirits (I don't mean the Holy Ghost kind) that flowed through the building's most recent incarnations, but the building went through another stint as a loan company. 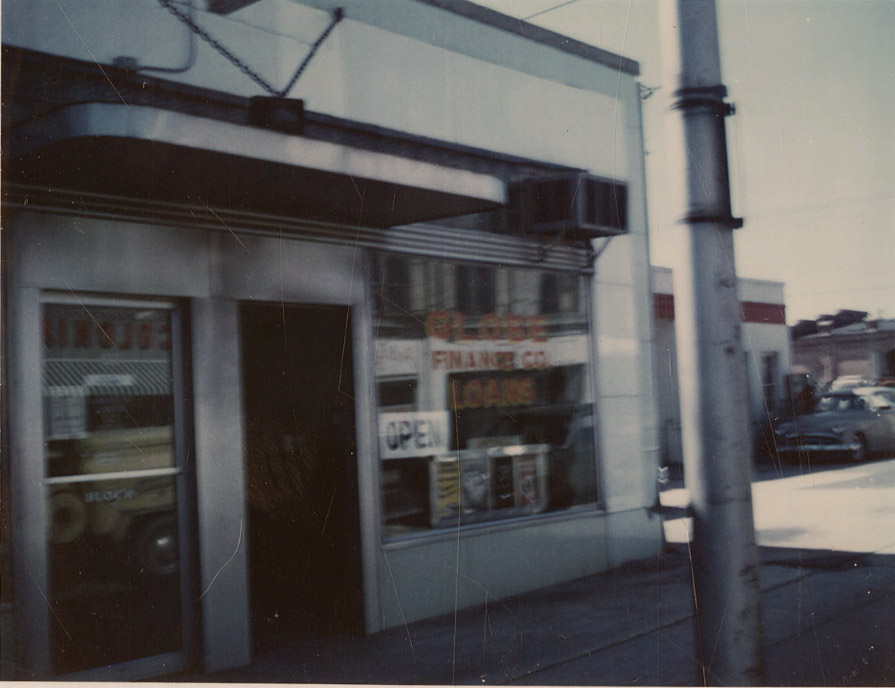 And "Magic Touch Massage" in 1974 - probably not a sign that professional massage therapy was offered given it's wordless place among Duke student hangouts in the Chanticleer. 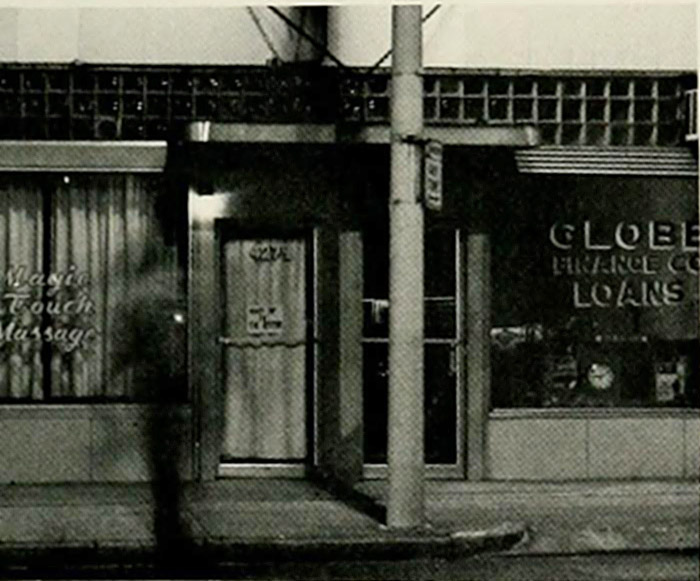 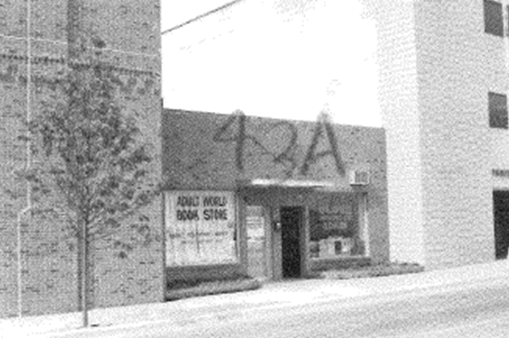 Soon to diversify into literature by becoming the "Adult World Book Store" (photographed in February 1976 by a consultant to the NC Historic Preservation Office.)

I'm not sure how many different establishments were in this building between the Christian bookstore and Joe and Jo's, but one other notable establishment in this location was the New Orleans Cookery during the mid-1990s. It attracted a good following and expanded to Chapel Hill before there was, I believe, an embezzlement-and-skipping-town issue. 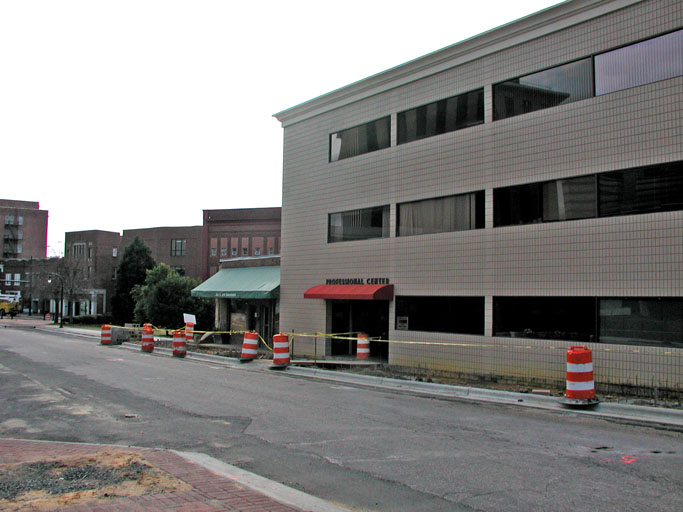 Joe and Jo's opened in 2002 and established itself as the place that had what downtown Durham had always lacked - energy, life, and consistency; an open-minded and open-hearted kind of place that didn't need a theme or a gimmick. It didn't try to be trendy or overdo it - with food, people, or music. As a result, it became, in my opinion (and I know the opinion of many others) the soul of downtown, with as eclectic a crowd as I've known in Durham. 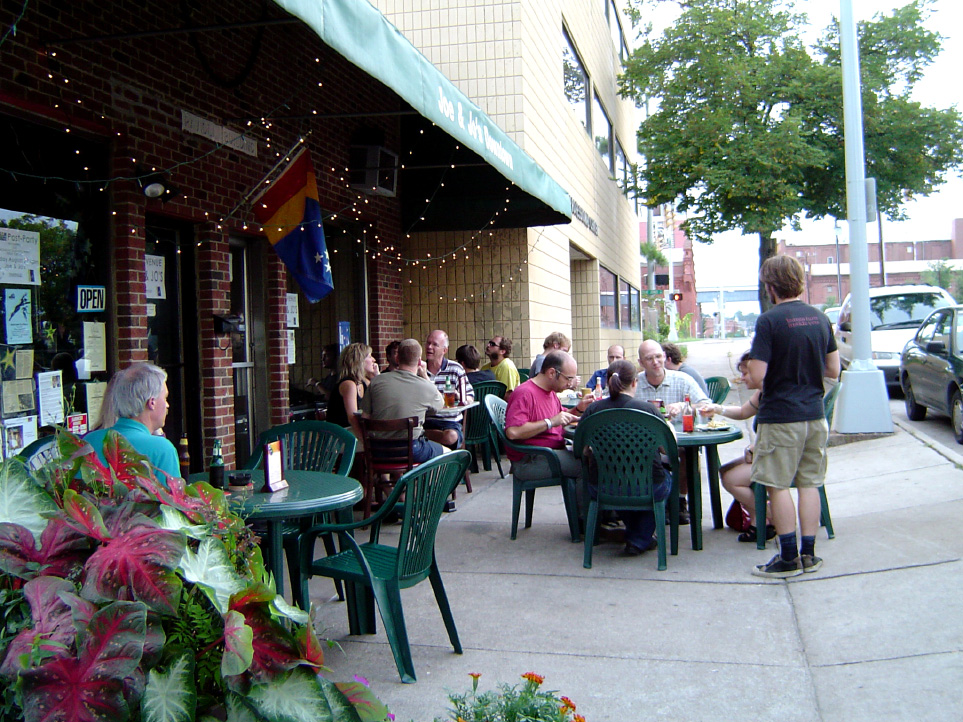 And as most who would read this blog assuredly know, it closed late last year, and the Indy has thoroughly documented that story. 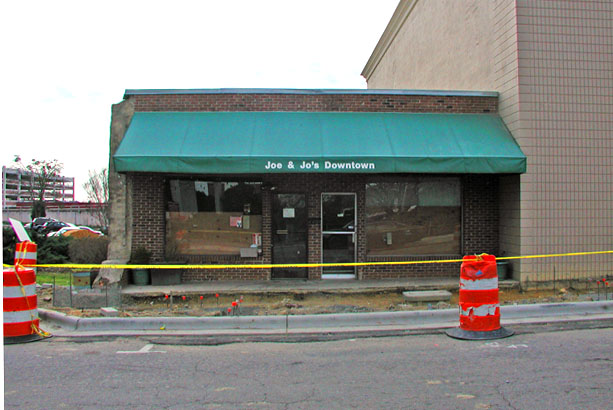 I'm allowing my paean for Joe and Jo's to wax a bit freely here because I think it's an important example of what the city/DDI don't seem to understand about downtown. While we throw millions at parking decks and giant theaters (and, before that, convention centers) and creating plazas and such, one little establishment - in just about the smallest building downtown - was a much greater force and energy behind the creation of downtown-as-place. It is already greatly missed.

It's rather amazing how quickly a place like Joe and Jo's passes from the collective memory of Durham - enough people have come in to downtown in the intervening 3+ years, that the name doesn't frequently strike a chord. Most folks will know the building by the restaurant that has been there since May 2007: Bull McCabe's 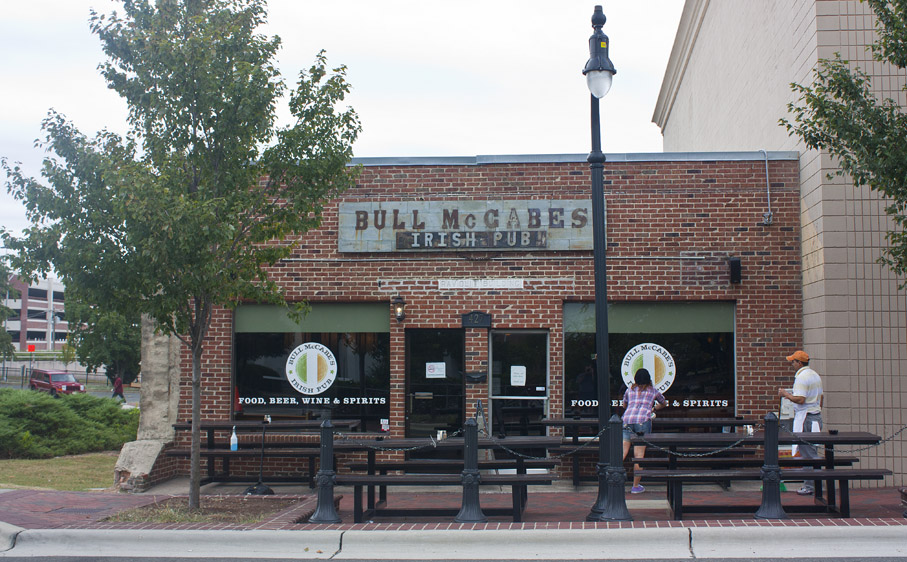 As downtown has continued to grow, it's been amazing to see places like Bull McCabe's expand capacity and fill it easily. In 2013-2014, the owners built a patio space on the eastern side of the building (having acquired the adjacent property from Anna Ho.) As of Spring 2014, it was filled with a capacity crowd on the weekend.

Sometime during the mid to

Sometime during the mid to late 80s, the Joe & Jo's building had a ravioli business in it. I thought there was a stone built into the building's wall which noted the building's name at that time, but I haven't looked lately.

In what proportion I don't

In what proportion I don't know, but I would put a word in that DDI frequently speaks of the importance of retail and other small businesses as part of what needs to be in downtown if a vibrant downtown is to be either meaningful or sustainable.

PhilYou are right, they do. I

You are right, they do. I would argue that there is a difference between the rhetoric and whose interests are actually fought for/financially-backed. I've heard DDI speak of historic architecture as one of the most essential assets of the city, and, in the same sentence, advocate for tearing down historic buildings.

Any news on the reopening of

Any news on the reopening of Joe&Jo's as the Irish Pub?

No news that I know of, coco.

No news that I know of, coco. From some peeks, it seems like they've gutted the place, but the pace doesn't seem to be all that brisk.

It's probably hard to get any

It's probably hard to get any work in there done, as the sidewalk in front has yet to be poured...
Jo and Joe's demonstrated how a bar/restaurant/social scene in downtown can thrive. If local government hasn't taken notes, I hope that someone considering opening a spot downtown has.

The "Ravioli Factory" sign, or whatever it says, is still there, or at least was when Joanne sold it. I don't know why it would be removed, unless someone had a real obsession with message control.

Just before Joe and Jo's, it was the Thyme Table, (unrelated to the Mary Bacon/Somethyme/Anotherthyme axis), a fine little restaurant. I heard they moved to like the basement of city hall or something for a bit. Not sure what happened to them.

I remain highly skeptical that the Irish pub can last a year in that spot. If they're still dragging their feet on opening, I start to wonder if they'll ever open.

I believe that the stone

I believe that the stone embedded in the brick says "Ravioli Building". I'm wondering if the stone actually came before the business that Joe mentioned, simply because it is a pretty understated element, more typical of an early 20th century office or the like.

They do seem to be working on it, accessing it through the back door. I noticed some ceiling tiles stacked against the back wall last week.

I'll give the Irish pub the benefit of the doubt until I actually see it, but it seems pretty uninspiring. One Irish pub in a town with little or no Irish heritage seems like plenty. (Didn't Biddy Early's already try to make it two and fail?)

Ah, but Biddy Early's was in

Ah, but Biddy Early's was in a Bill Fields building--almost a guarantee of failure.

Ghardelli Ravioli. they had such good ravioli. A shame they left, but this was early 90's and nothing was downtown to speak of.