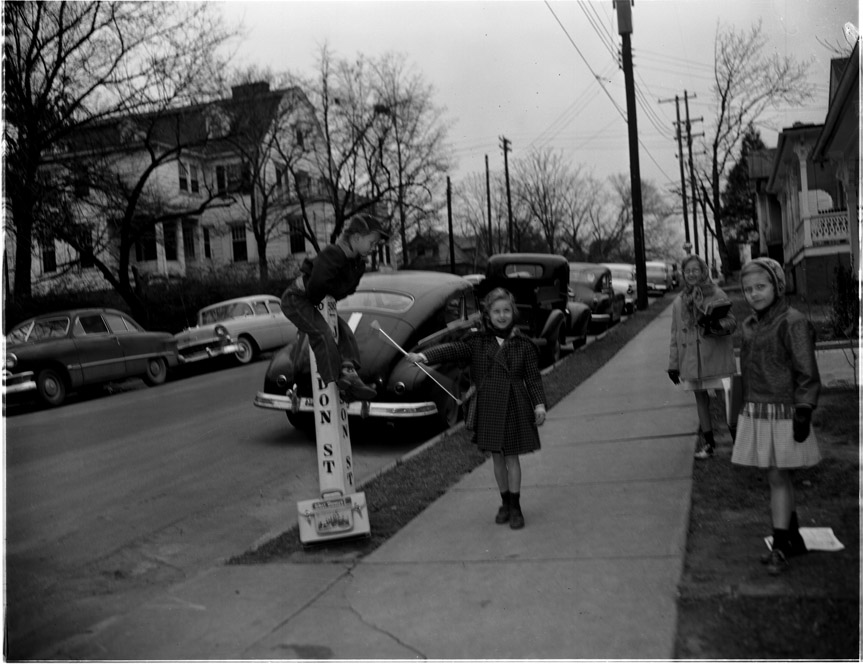 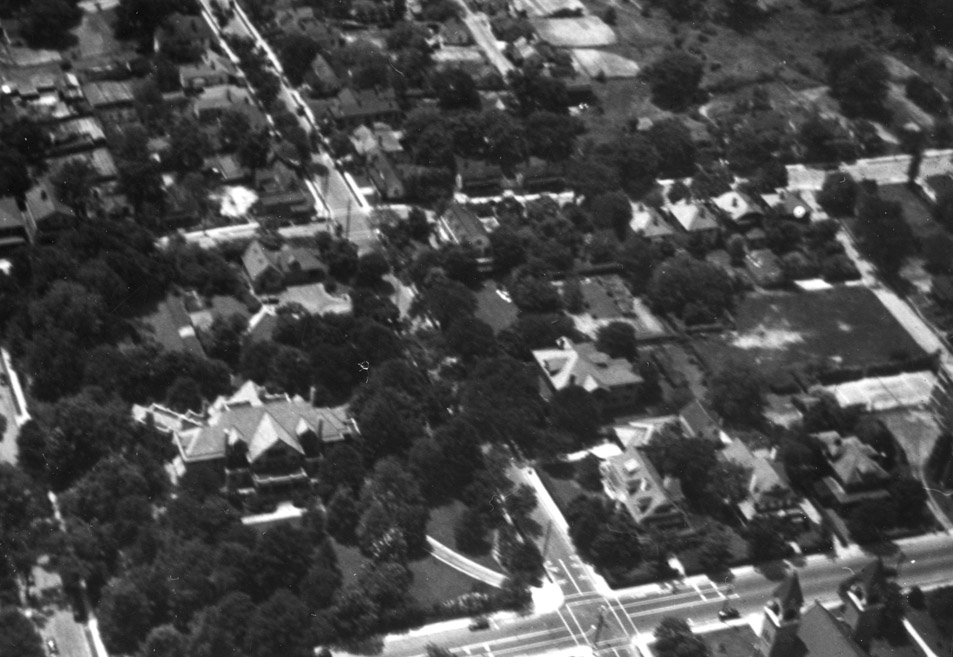 It's hard to envision the area near Jackson St. and South Duke St. as the middle of a residential neighborhood at this point, but while the character of West Chapel Hill St. near South Duke began to change to a more commercial mix by the late 1940s, the neighborhood, off of the main drag, remained much like the back streets of Trinity Park, or Old North Durham, or East Durham.

418 South Duke was the home of Kemp P. Lewis, who served as Secretary-Treasurer (i.e., the person running the place) of the Erwin Cotton Mill. He would become president of the company after the death of William Erwin in 1932 and remain in that position until 1948, then becoming chairman of the Board of Directors. 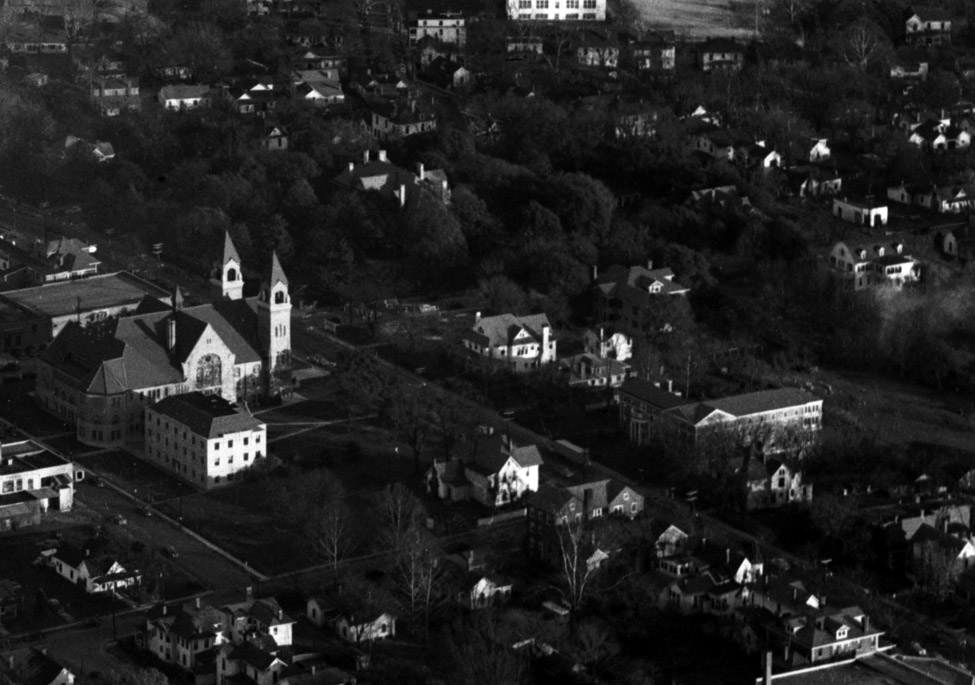 These shots, of kids playing near the intersection of Gordon St. and Jackson St., give a sense of the neighborhood as it was.

Looking northeast from Jackson and Gordon, 01.11.57. The large house in the background is 418 S. Duke, a large Dutch Colonial also visible in the above aerial photos. 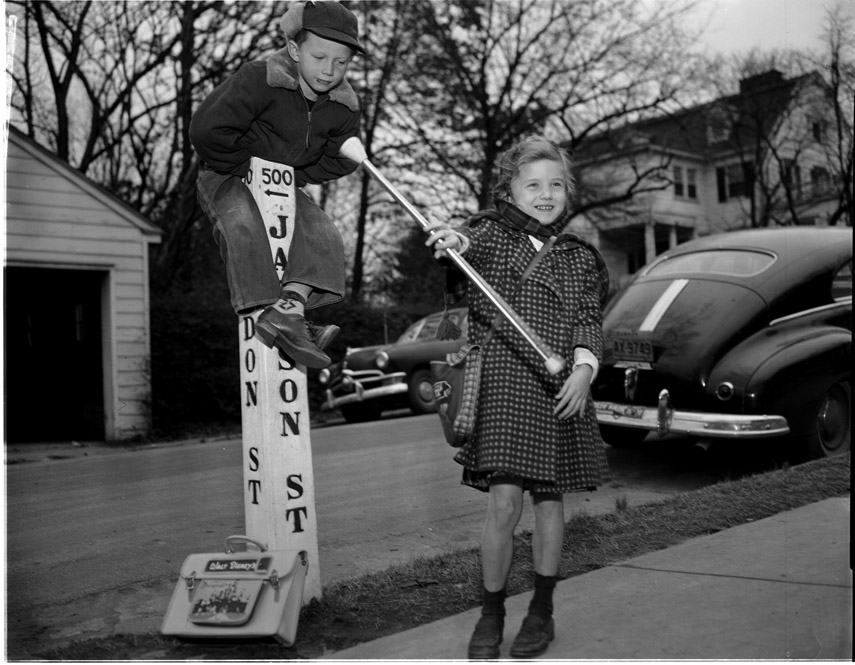 A closer view of the kids playing. 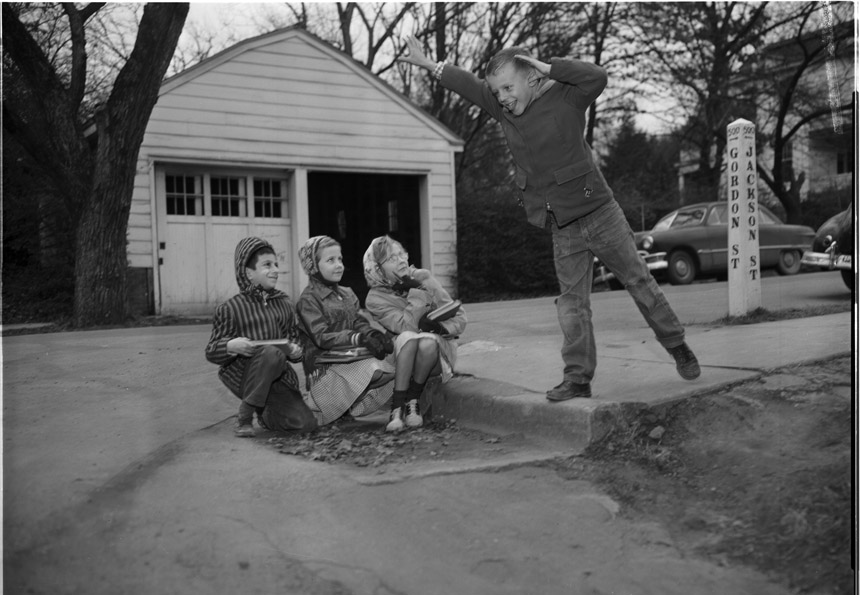 A somewhat staged shot, showing the garage of 418 S. Duke in the background.

Unfortunately, there is little semblance left of that neighborhood. The houses north of Jackson Street, including 418 South Duke, were demolished that same year for the Home Security Life Insurance building, the Durham Police Department headquarters as of 2008.

Looking northeast from Gordon and Jackson, 01.28.08

One portion of this homeplace survives, however; Kemp's daughter Ann(ie) moved the playhouse from the backyard of the 418 South Duke house to her new home at 3321 Devon Road, where it still stands as of 2012.

Wow.Look at the number of

Wow.
Look at the number of enormous and beautiful trees in those two bird's eye views.
Perhaps they offer a reminder for how people survived without air conditioning back in the day - the cooling effect of trees are tremendous (many claim up to ten degrees cooler outdoors in treed neighborhoods and up to 20 degrees cooler inside houses).
TT

Gary,That was a very powerful

That was a very powerful post. I think seeing the faces of the people who once lived there did it for me. Can you imagine one of those kids returning today as an adult to visit the old neighborhood and seeing nothing but an urban wasteland of parking lots, highway interchanges and grown over lots? How incredibly sad.

In your second photograph,

In your second photograph, the commercial building that's behind the church is the Durham Dairy. Just to the east was a house the Dairy used for its administrative offices.

Richard Morgan (Morgan Imports) lived directly across South Gregson from the Dairy offices. His house can be seen in the photograph, the two-story house to the east that's on the corner South Gregson and Burch.

John D Loudermilk lived for a while in a house that was in the same block as Duke Methodist (to the east of the church, on the corner of South Gregson and Burch). You can't see Loudermilk's house in your 1948 photograph, it's already a vacant lot. (Loudermilk was born in a house behind what is now Magnolia Grill, lived for a while on Gin Street and later in Few Gardens.)

Richard or John D (I forget who) told me they played baseball in the empty parcel right next to the Loudermilk house. Home plate was near South Gregson. I understand the neighborhood kids were responsible for breaking windows in the church building on a number of occasions.

Thanks John. I will be

Thanks John. I will be covering the Durham Dairy quite soon.