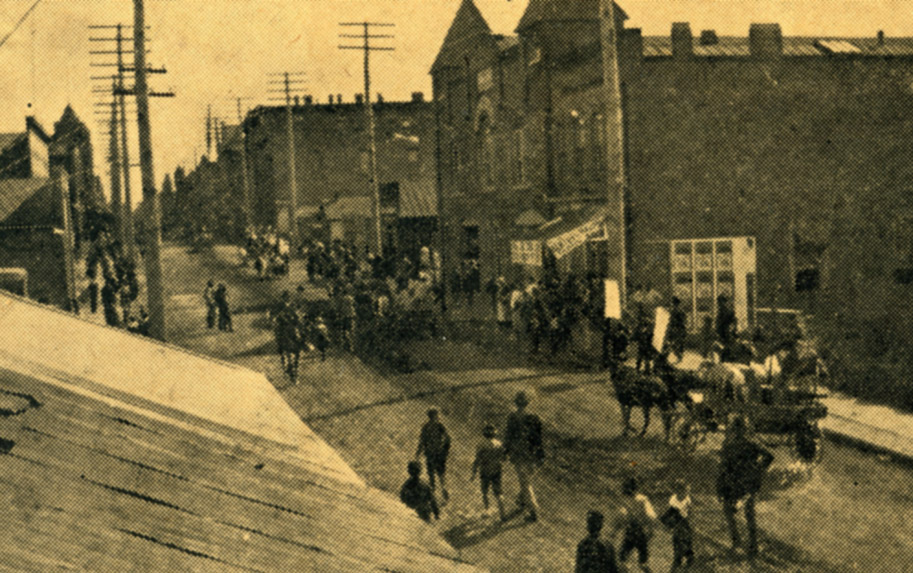 313 West Main is one of those downtown commercial structures that may be, in Durham terms, quite old, or sequentially replaced, or modified so heavily over the years that it isn't easily tied to its origins.

Regardless, the earliest concentration of commercial structures that could be called 'downtown' clustered between Depot (Corcoran) St. and Roxboro Road. The area west of Depot/Corcoran to Five Points was largely a mixture of frame dwellings, small frame stores, frame warehouses, and the like. By the 1890-1900 era, this had begun to change; buildings such as the structure on the northeast corner of West Chapel Hill and Morris St. (the heavily-modified remnant of which is in the news of late given its pending sale by the city) and the original Armory Building began to appear in the Five Points area.

It is during this period that a masonry structure was built at 313 West Main (although the address was different at the time.) In the picture above, taken from near Five Points looking east on West Main St., you can see the Armory Building, the smaller two story structure to its right, and the preponderance of frame storefronts/warehouses that typified the area in the decade prior to 1900. 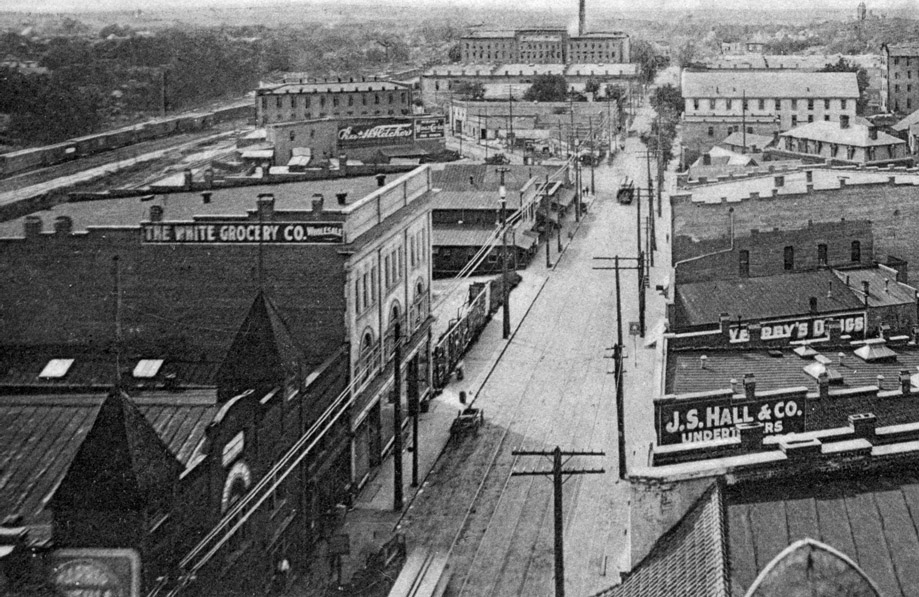 Looking west along West Main St., 1905. In the left foreground, one can see the three-story Kronheimer Building at 315 West Main. 313 is immediately to its left/foreground, and the towers of the Armory Building are visible to its left, in the immediate foreground.

By 1907, the Steam Laundry moved into the Armory Building, and 313 became a plumbing supply store.

By 1913, it appears that the building may be the same, but its footprint is deeper than in 1907. The Armory Building to its east has been demolished or heavily modified into two shorter structures. 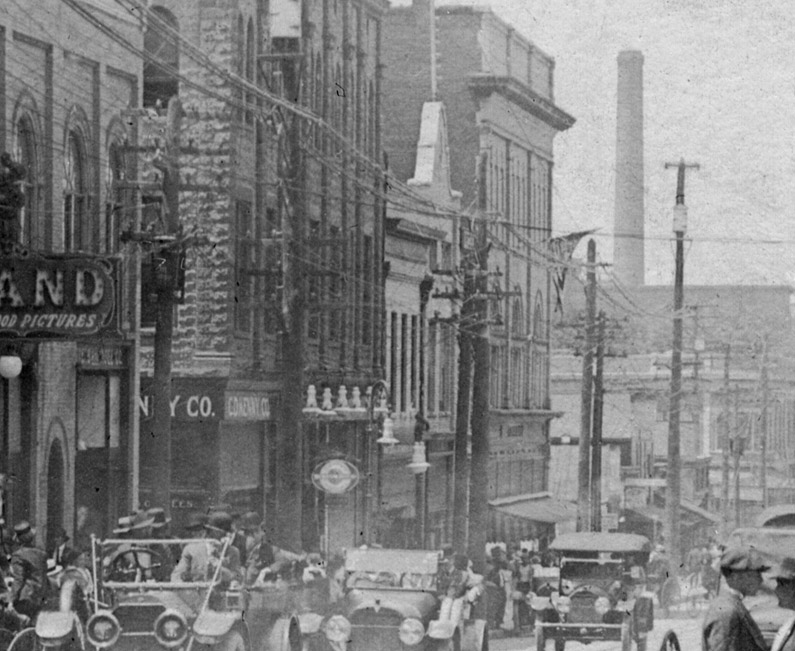 1910s view, showing the three structures between the CD Kenney and new Armory Building at 301 West Main. and the Kronheimer Building. 313 is almost completely obscured by the utility poles.
(Courtesy Duke Rare Book and Manuscript Collection)

In 1926, the Hill Building replaced the two structures that may or may not have been part of the old Armory building. At that time, 313 was either replaced or heavily remodeled to approximate its current form. The picture below barely shows the front facade, to the right of the Hill Building, but the simple stuccoed pilasters are visible; it also appears to originally have had a structural awning of some sort, suggesting perhaps a more Spanish Revival form than is evident now. 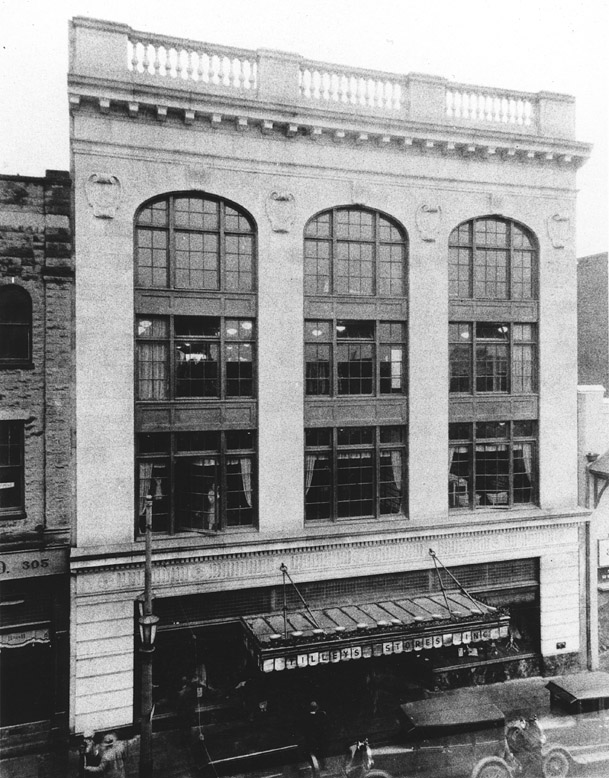 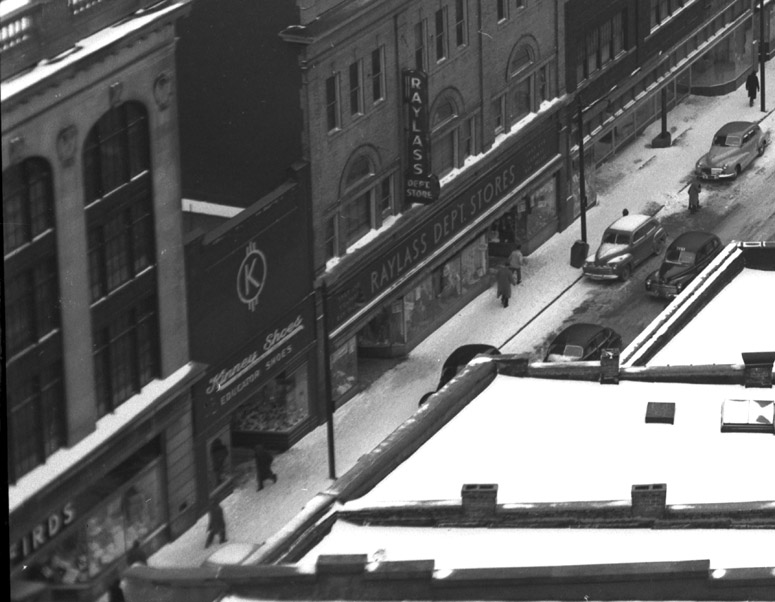 A 1950s color shot suggests that the facade may have been red. 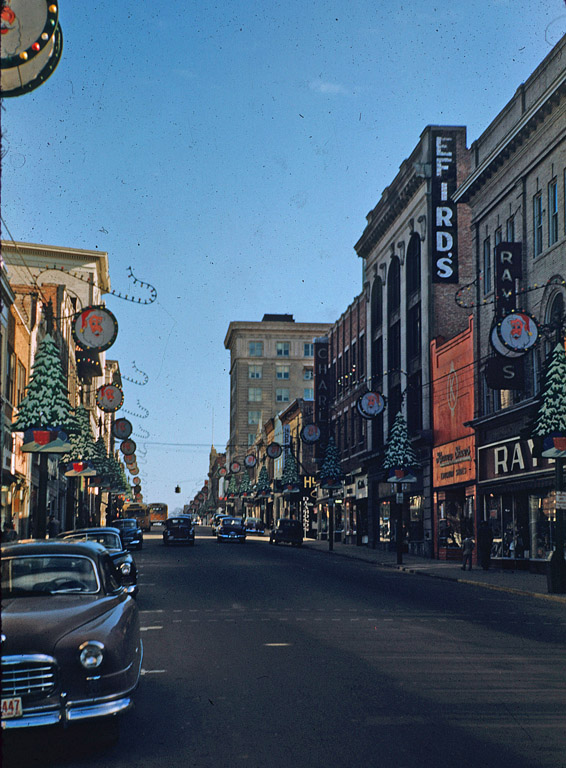 By the mid-1950s, the facade signage/style had been changed to read "Kinney's Shoes" 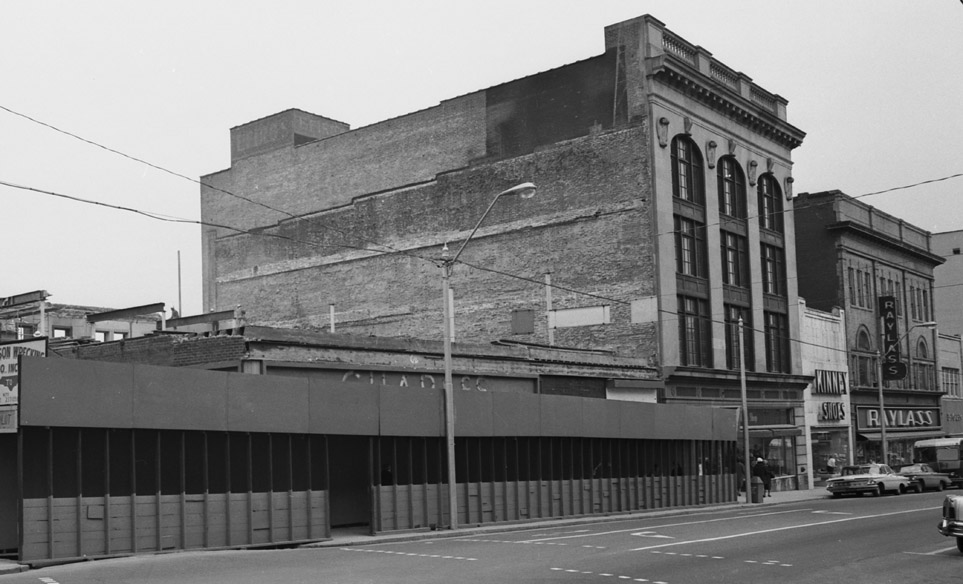 09.18.55 view of the same three buildings, with the mostly demolished 301 West Main (2nd Armory building) in the foreground.
(Courtesy The Herald-Sun Newspaper) 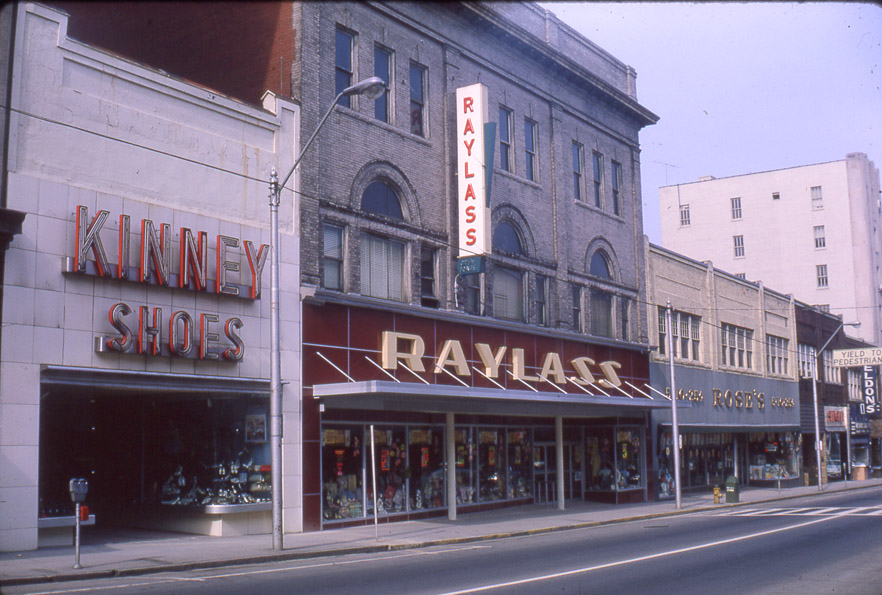 By the 1970s, it appears that Kinney's Shoes closed. I haven't done the city directory research to identify what was housed in the building from the 1970s-1990s, so feel free to fill me in. I do know that "Jo Belle" hats and bags was in the space during the early 1970s. 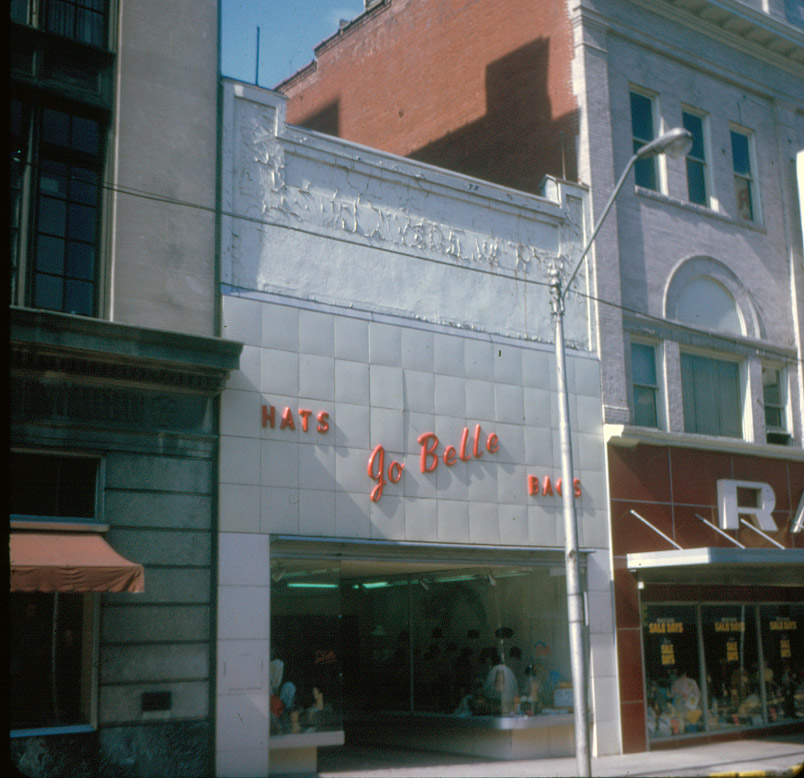 In 2001, the Republik, a creative agency, renovated the building for their offices. They remained here until 2009, when they moved to Rigsbee Ave., and the building became home to Heather Garrett Design. 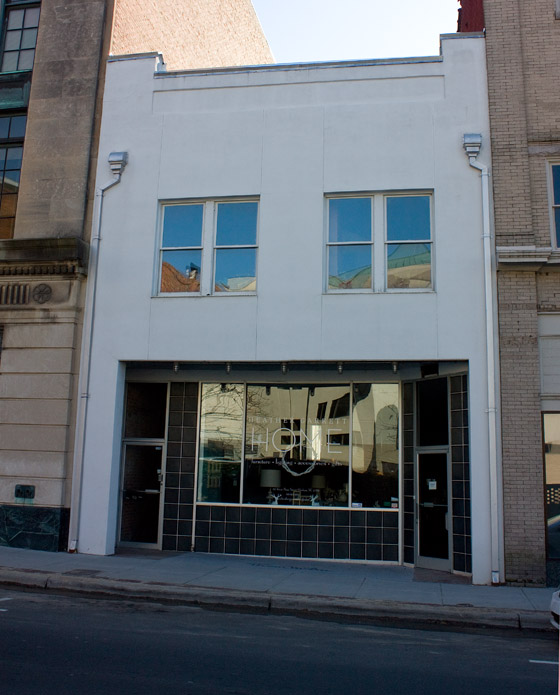 Heather Garrett moved on from this building in ~2012, and the building has housed a series of tenants since that time.

I was researching about who

I was researching about who Raylass Department stores were (I don't remember them) and found this:
http://www.departmentstorehistory.net/

Neat info on that site.

Nice pics, Gary. It looks like the City of Durham had some very fancy Christmas decorations in the 1950's. You had a pic of some Santa on almost every light pole in another pic-same general era.

I LOVE the intricate stories

I LOVE the intricate stories behind the buildings that you highlight, Gary. Thank you!

Kinney Shoes became Thom McCann shoes. Eventually Thom McCann moved to South Square mall, I think they were in the mall from the beginning (1975); lower level by the escalator. I do not remember if they ran both stores for a while.

I think you can still see the Thom McCann logo in the tile in front of the building.

Kinney Shoes was never associated with Thom McCann. Kinney's was purchased by Woolworth's in 1963. Foot Locker came out of this merger but other than that Wooworth's drove Kinney's down.

Great article! I used to work

Great article! I used to work at The Republik, (the old Kinney Shoes space) and always wondered what the history of the building was.

Thanks, Anonymous for clearing up the Thom McCann mystery for me.

I do know that mid-late 1990's the space was Main Street Cafe owned(?) and operated by Steve Barell.