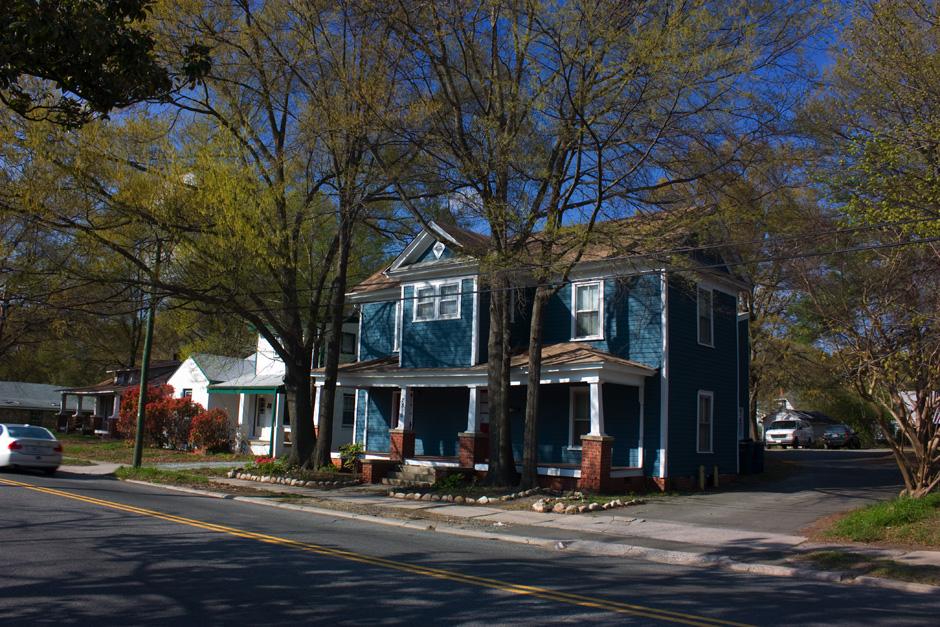 The house at 2810 Hillsborough Road was the longtime residence of members of the Baucom family - Matthew T. Baucom, from sometime in 1925 or prior to ~1956, followed by Daniel Baucom in the late 1950s.

As one of the only two-story houses on Hillsborough Road (a rarity in West Durham north of the railroad tracks,) it was converted to apartments by the 1970s. It remained apartments until the mid-1980s, when it went up for sale.

It was at that point that a weekly newspaper located down the street began to look at it as a potential new home. The Independent Weekly, which had to that point been located in a window-free office behind a typesetting firm at 2824 Hillsborough Road. That concrete block structure had been its home since its inception on June 1st, 1982 (the first issue was not published until April 1983.)

Per Steve Schewel, the former Baucom house was empty, and Eugene Brown showed them the space; a group that included the Indy's founders purchased the house, and in Spring of 1986, they began their multi-block move. The most dicey moment of said move involved loading the Indy's "huge process camera" - from its former location in the office bathroom onto a "tiny hand-truck" which they carefully pushed down the bumpy Hillsborough Road sidewalk until it reached its new home, unscathed.

Although the house was large as houses went in West Durham, it was soon too small for the paper. They had knocked down a wall that had previously divided the house into two apartments, and soon thereafter Indy co-founder and "production person" David Birkhead commenced building an addition that expanded the house by 1/3 - in three weekends, no less. The space was necessary not least of all, per Schewel, because

"during the early days of the Indy, we often had babies and small children there during the day. Before the building got too crowded with our growing staff, we had set aside a room for sleeping kids which included a crib. During 1986-87, I often brought my baby, Abe, to work and hoped and prayed he'd do some sleeping in that crib so I could get something done at work. Other Indy staff did the same over the years."

The Indy used the house as its office for 20 years before moving in 2006 to the former Venable Tobacco Company Prizery building, which had at that point just been renovated by Scientific Properties.

The house at 2810 Hillsborough was sold in April 2007 to the "Church of Philadelphia in Durham" which remains owner of the building.

Is it just my computer, or

Is it just my computer, or have all the photos disappeared?

WrenSeems okay to me - I'm

Seems okay to me - I'm not sure why this happens (it has happened to me before) but the photos and the text come from two different places, so if my server decides to be lazy, Google/Blogger will still load the text. It seems to rectify itself pretty quickly (with a simple re-load page for me.)

So that part above the

So that part above the porch... I wondered if that used to be another upstairs porch? Do you know?

I don't know, but I'd put my guess that it was at about 85% certainty. There are several examples of that style still around with the porch unenclosed.

It's amazing how often I find

It's amazing how often I find myself wanting to Pray to various cities in Pennsylvania and not knowing where to go!

Now, I do and so close to home!

(just being silly for a while, I've always liked this house)