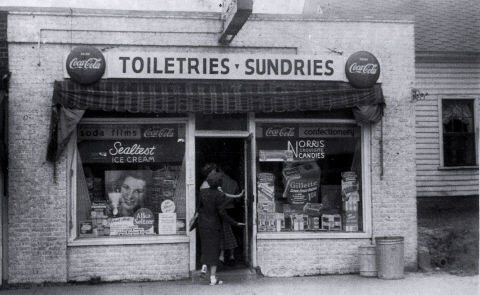 The three-bay commercial structure once located at the corner of 16th St. and Hillsborough Road appears to have been built in the early to mid 1920s, and was first home to the Hillsborough Road Drug Co. Midgett's Barber Shop was added by the late 1920s.

By the late 1950s, a store across the street (with a fantastic name) moved to 2603 Hillsborough - the Ideal Sundry. I'm not sure if a fourth bay was added to the storefronts at that time, as Ferrell's Barber Shop, Fent's Place, and the Petite Beauty Shop remained in place at 2605-2609 Hillsborough.

Per the Old West Durham website, the Ideal Sundry was operated by Mr. A.W. "Bill" Holmes. The site states that "Bill, always with a smile, would welcome his many customers. After school and on weekends, the Ideal Sundry was also a favorite meeting place for teenagers. [Kids] could enjoy a cold soda, select a favorite comic book or buy anything from toys to chips."

The commercial storefronts at 2603-2609 Hillsborough were torn down in the mid-1980s. The site is now a surface parking lot for Greystone Baptist Church. 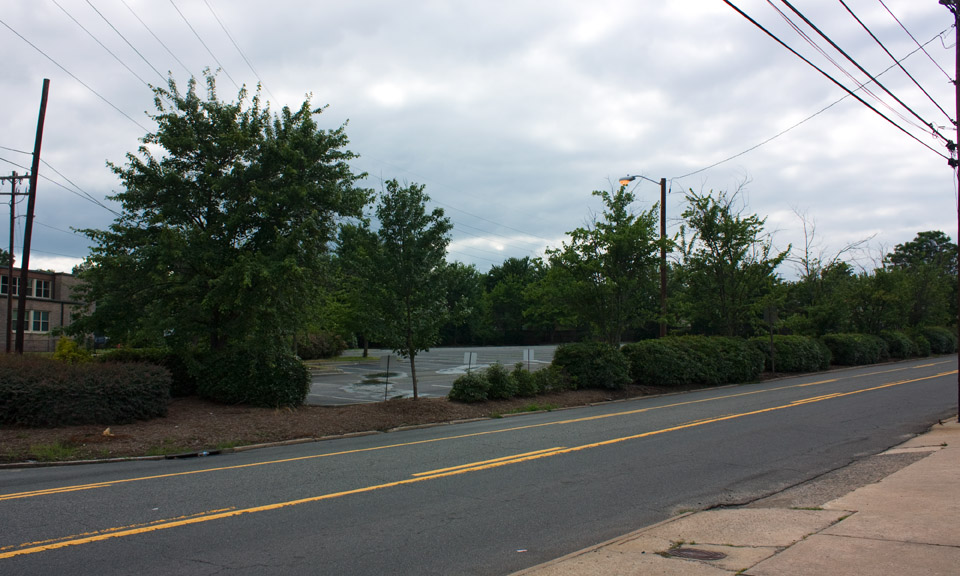 I have a couple of

I have a couple of questions/curiosities regarding the area you're covering now:

2) I have noticed on 15th St. two or three virtually identical white houses, surrounded by very flat empty lots. Did these lots once hold similar houses, and what happened to them? They seem to be out of the path of 147.

3) I have also seen several concrete markers with "R/W" engraved in them--several on 15th St. and one each on the southwest and southeast corners of Erwin Rd. and Anderson St. What are these? Many of them are near the aforementioned empty lots.

Thanks for blogging--I enjoy your posts!

Don't forget about F St. That's the last remaining "letter" street (my side yard faces it). I have also been curious why/when the names changed, if they happened at the same time, why a couple remained, etc.

My guess for F St is that it remained because no one actually has an address on F St. All houses along F St. either face Broad, Clarendon, or Sedgefield. Not sure if that's the reason though...

Like many things in this part of Durham, you have to go back to 1892.

That was the year a young African-American man named George Wall followed his job with Trinity College to Durham. Wall bought a wooded plot of land north of what is now East Campus. Later, Walltown became a neighborhood for mostly African American workers moving into the Bull City for jobs in the tobacco industry. The narrow shotgun houses and small residences provided easy access to the tobacco factories.

The old city limits crossed the intersection of Buchanan & Markham. This explains why Buchanan was called First Street, north of Markham (and Markham was called A Street, west of Buchanan).

West Durham streets like Holloway, Blacknall, Washington, Church, Buchanan and Sunset all had sister streets elsewhere in the Bull City. Because other parts of Durham already shared some of these street names, many streets were changed after West Durham was annexed into the city in 1925.

What was Eleventh & B Street became Virgie & Green and what was Main & Hillsboro Ave is now Iredell & Perry.

Avoiding city taxes, Erwin Mills objected to annexation for many years (not having city water explains why the mill village had out houses until 1925).

The few remaining mill houses on 15th Street have stood for 100 years. The construction of Duke Central Campus and the East-West Expressway resulted in the loss of more than 450 mill houses.

Fent's was a popular lunch

Fent's was a popular lunch time place for workers in the 60s. All the food was freshly prepared daily by Fent. The interior contained a long counter, front to back, with stools for the customers.

There were hot dogs, hamburgers, Brunswick stew, chicken dumplings and best of all -- home made fried apple pies. During the summer he offered home made lemonade, frozen to a slush, and stored in a large pickle jar. The hamburgers were fried in the morning and kept in a stainless steel container, covered with gravy, ready for serving at lunch time.

Thanks. But what do you

Thanks. But what do you think of my F Street theory?

The concrete markers are survey monuments delineating the width of the public right-of-way (R/W).

What?! What was once a cool

What?! What was once a cool commercial building is now a church parking lot?! Truly shocking!

My mother lived on Fifth

My mother lived on Fifth Street in the 1920s. Isn't it now Sedgefield Street?

When I discovered Ideal

When I discovered Ideal Sundry in the early '80s, it was amazing!

The place was packed with, well, ideal sundries.

In my experiences, the proprietor, Bill Holmes, was not the warmest fellow...maybe by then he was wary of silly college students (especially from UNC). I never tried his famous concoctions (lemon and orange ades, iirc).

There was a room off the main store that was an amazing treasure trove of classic (in this case meaning unsold over the years) toys, games and costumes.

I was poorer then and could only afford some vintage (meaning unsold over the years) sunglasses and some 45s (Alvin Cash & the Crawlers' "Do the Barracuda"...the Cosmopolitans may cover this again for their upcoming Cat's Cradle show...I should request it).

Anyway, that stretch of West Durham was fun, in its quirky way.

Judy's Joke Shop is where Locopops is now...and Judy apparently was Mrs. Don Hill (of the guns and locks and safes shop).

There was a doorway behind her counter that connected her tiny shop to Don's (and his guns).

Well, that Judy was Mrs. Hill was just my assumption based on the open doorway, but I just checked the Don Hill website and apparently Mrs. Hill was Jeanette. Maybe someone else knows of the connection between Judy's Joke Shop and Don Hill.

The thing that always fascinated me, was that "Judy" was a real sourpuss, in my experience. Again, maybe she cared not for college kids (from UNC).

Still, I found it ironic that Judy's Joke Shop was run by someone with no obvious sense of humor.

I was a Duke student living

I was a Duke student living in a house on Club Blvd. in the late 70's and early 80's. One day a friend of mine told me about the lemonade at Ideal Sundry....OMG! Once I tried it I was always going back. I can remember the crates of already-juiced lemons sitting out front of the store. I remember the lemonade being very icy and sweet. The best I've ever had....and the quirkiness of the store made the whole experience of going there fun. The owner was not especially friendly to me either....at the time I thought it was because of my northern accent. I loved living in Durham and stayed an extra year after graduating. It was hard to leave places like Parkers in East Durham with their great BBQ and slightly sweet hushpuppies. The grits and cornbread at a breakfast place--I think called Morgan's on 9th street was good too. I even had jobs at Sturbridge photography studio in West Durham and a Chinese restaurant nearby. It's a shame these southern restaurants and food stores no longer exist--even back then they seemed like relics- I guess that was part of their charm. Wish I had that lemonade recipe!!!

Thank you for remembering Fent's Place in such a lovely and detailed description! I am Fenton and Henrietta Garris' great-grand-daughter, Debbie, and every thing you wrote is exactly what I heard from the stories passed down to me. Do you have any photos or other stories from Fent's Place?
dg

Ate at Fent's place often with my Dad, Ralph Gore.

Ate at Fent's place often with my Dad, Ralph Gore. Fent served the lemonade that Bill Holmes made across the street at Ideal Sundry. Ferrell's barber shop next door was often the first stop, followed by burgers at Fent's, and concluding with crossing the street to Bill Holme's to read the most recent comics, before returning them to the rack. Then, if my bike was ailing, next door to Click's Esso for a free repair. Great area to grow up in the early 60's.