202-204 North Corcoran Street was likely built as early as the 1880s as a tobacco prizery - it may have been remodeled to match Hackney Block cornice line - or vice-versa.

In 1902, the Hackney block was built at 206-210 N. Corcoran. Given the similar appearance of the two buildings, 202-204 N. Corcoran was either demolished and replaced, or remodeled on the exterior to match much of the detail of the Hackney Block. I believe the latter is true.

By 1907, it housed the Smith Manufacturing Company, which made overalls.

This picture shows a street-level view, likely 1915-1925, looking east from Corcoran St, with the building housing the Shepherd Furniture Store. It would continue to house furniture stores for the remainder of its time in Durham. 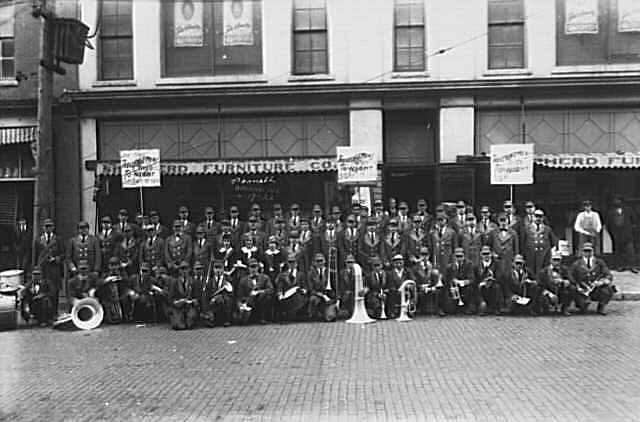 By the 1940s, the building was home to the Vogue Furniture Store 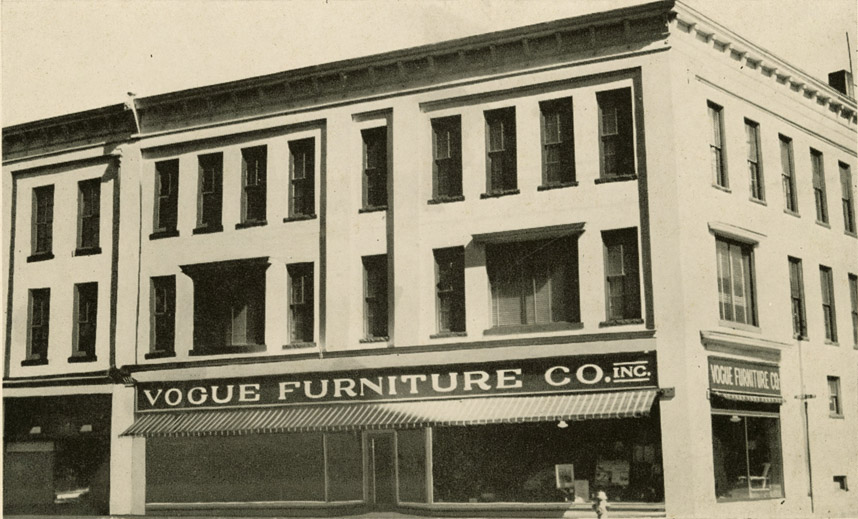 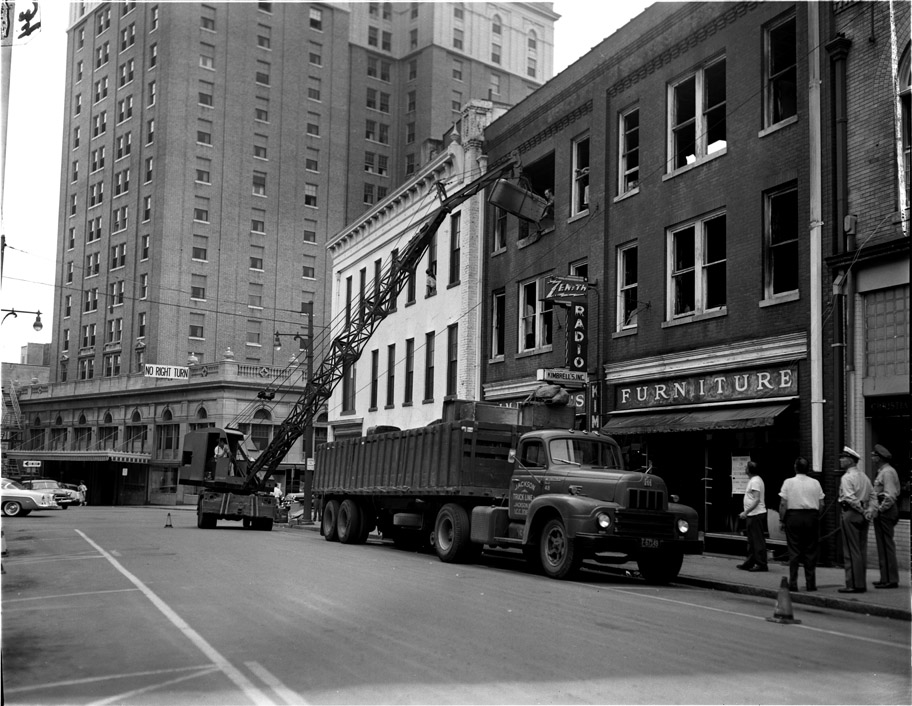 This view from late 1955, looking northeast, show the entire corner, including the repeating cornice line of the two buildings as they wrap around the corner, and the burned-out Kimbrell's behind. But note the unusual projections from the roofline of 202-204 - I think these indicate an earlier construction, and may have been ventilation stacks for tobacco. 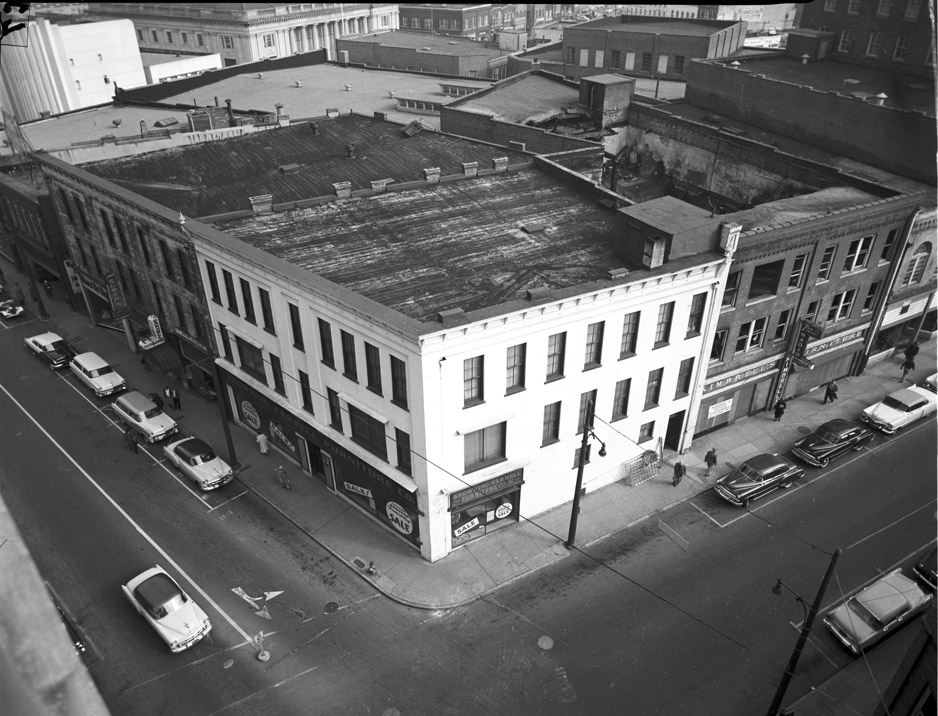 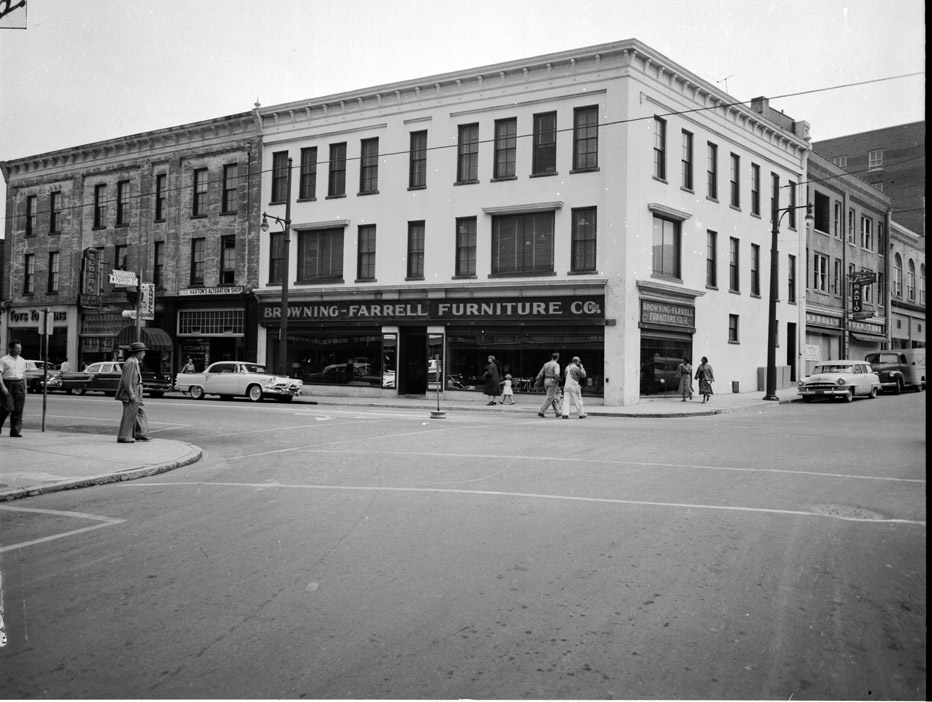 By 1956, the adjacent building on West Parrish has been torn down and turned into a parking lot. 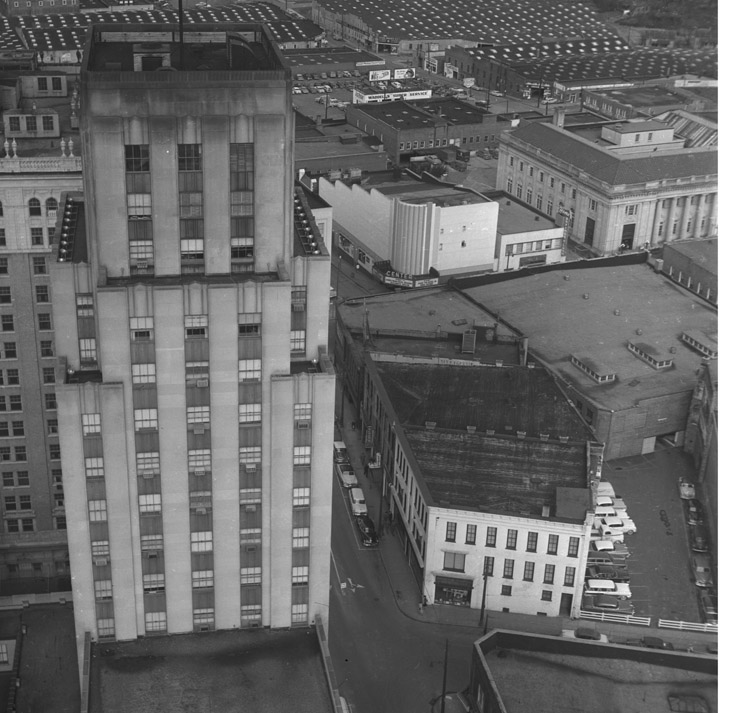 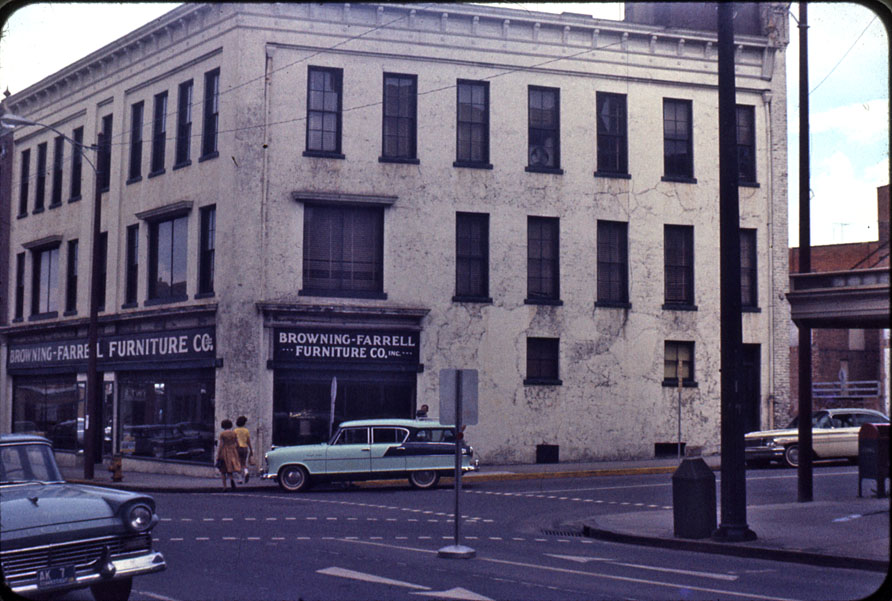 By 1962, it, the Hackney Block, and another building on W. Parrish St. are mostly demolished in preparation for construction of the Jack Tar Motel. 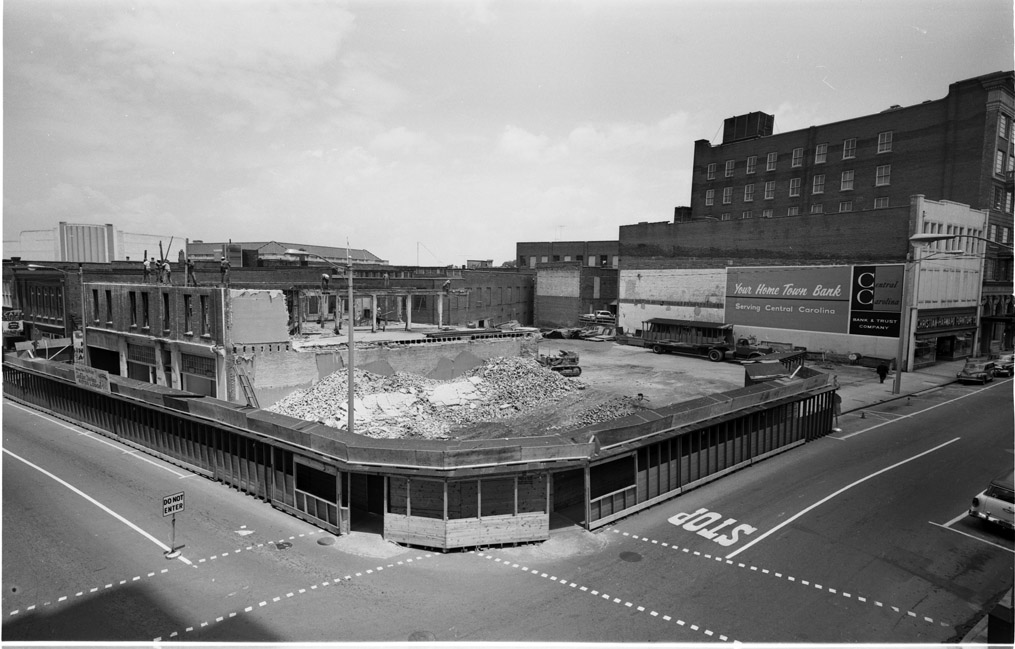 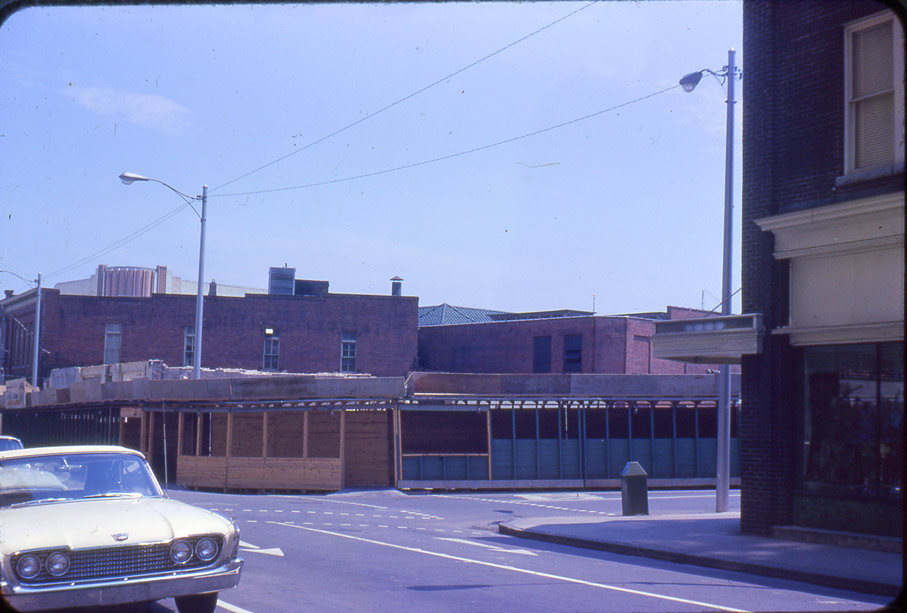 By 1963, the first stage of the Washington Duke Motel is complete. 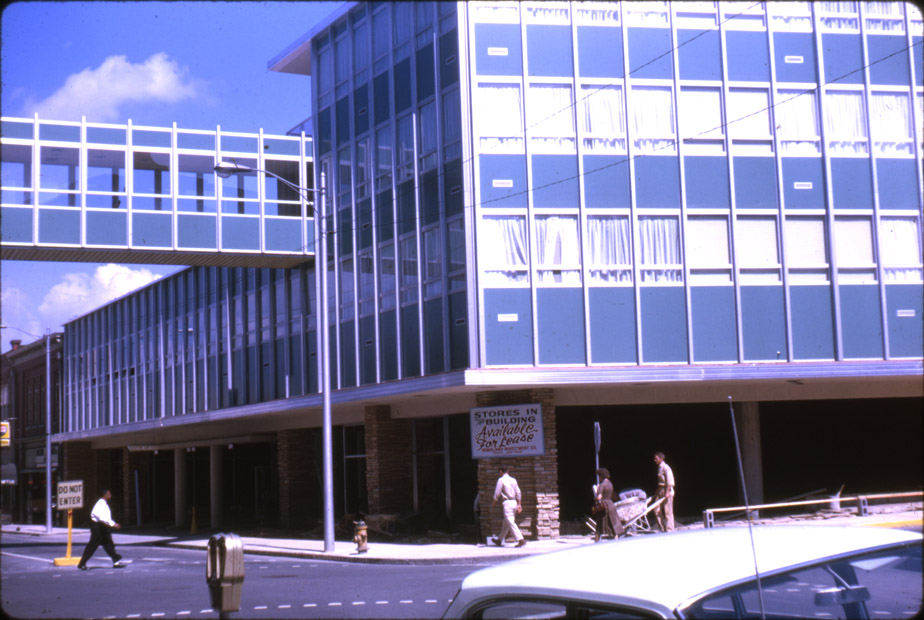 Attempting to compete in the motel era, the proprietors of the Jack Tar (nee Washington Duke) Hotel sought to expand with motel space, including an integrated parking garage and swimming pool. Note in particular the skybridge that connects the new motel with the Washington Duke Hotel, directly west across Corcoran. It is also interesting to note that the motel was built in stages. You can see the remaining older commercial structure at the southeast corner of East Chapel Hill St. and Corcoran in this photo. Its days were numbered. 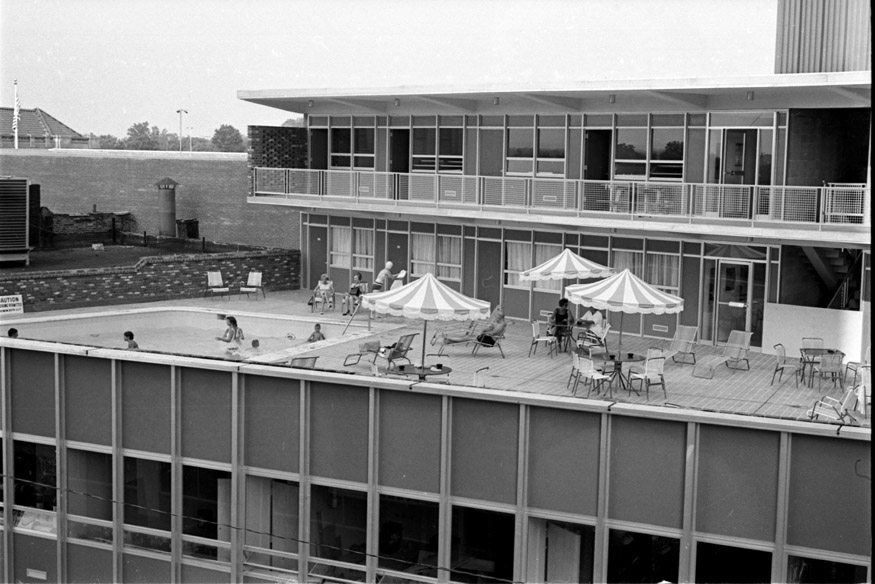 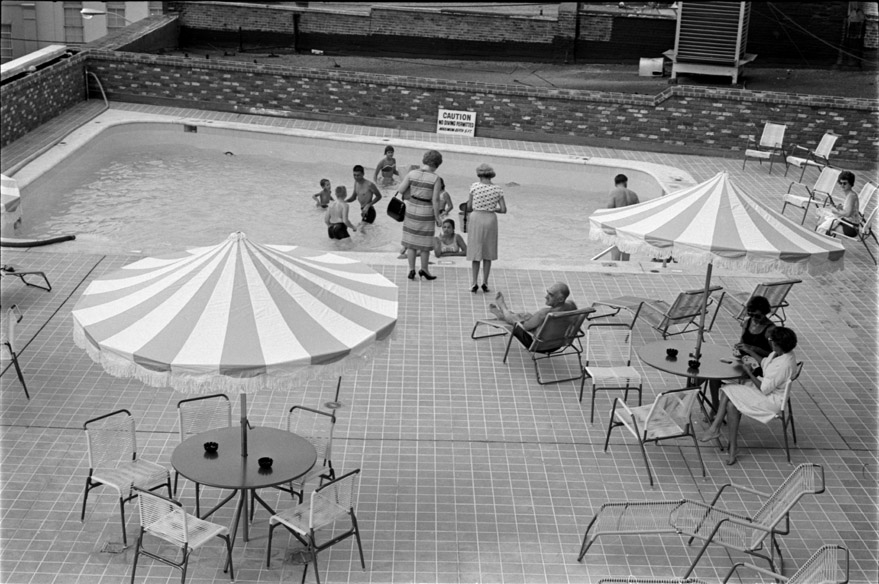 By the late 1960s, the remaining older structure on the southeast corner of Corcoran and East Chapel Hill would be demolished as well, and the Jack Tar Motel would expand to take up the entire block face between Parrish and Chapel Hill Streets, and a large portion of the block bounded by those two streets, Corcoran, and Orange Street. 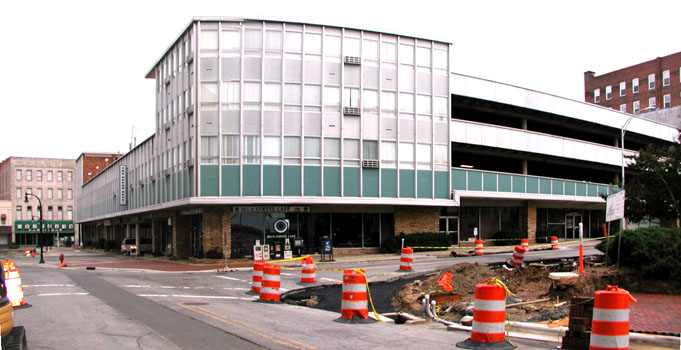 Looking north from Corcoran and Parrish, December 2006
I don't know if it functioned as a motel after the Washington Duke/Durham Hotel/Jack Tar Hotel went out of business, in the mid 1970s. It is currently owned by Ronnie Sturdivant, who also owns the empty former Holiday Inn on Chapel Hill St (Urban Merchant Center) and really seems to want Oprah. (It has become known as "The Oprah Building" in common Durham parlance.