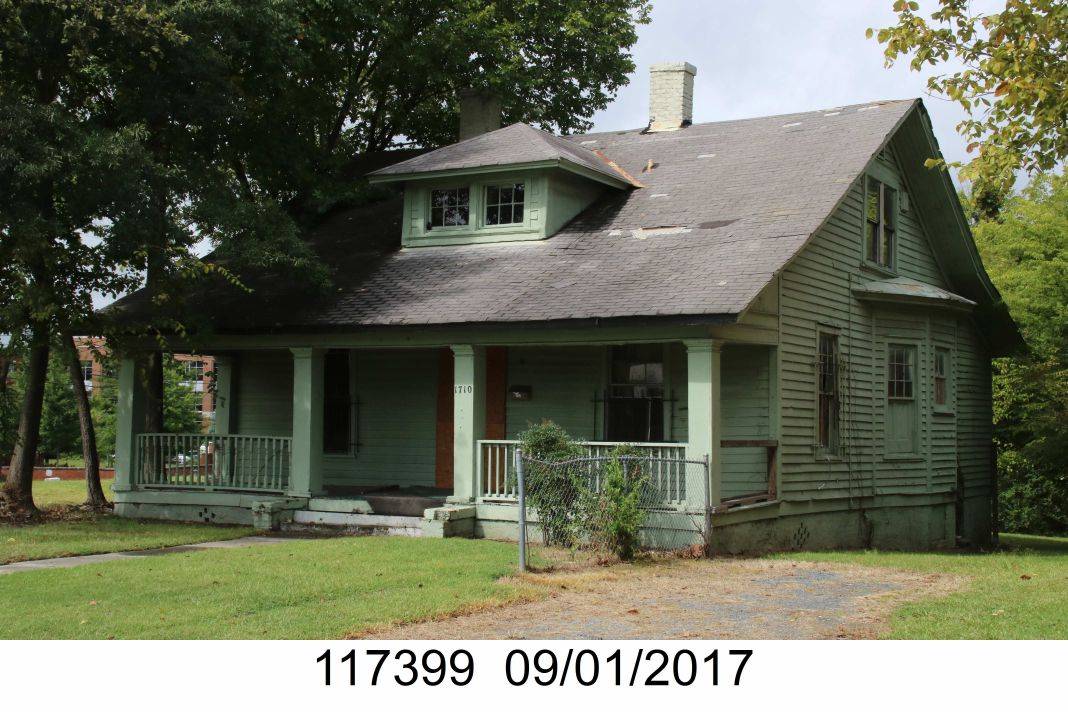 Thought to have been built around 1916, the first known residents and owners of this house were Hattie McMillan and her son, Walter, in the early 1920s.  After switching hands and residents in the 1930s, the home was purchased by Charles Rudolph Stanback and his wife Geneva Torrence Stanback in 1944.

Charles - or C. Rudolph - Stanback was a photographer and graduate of the Tuskegee Institute, where he had stayed on to teach the profession to students in the late 1930s.  Along with Tuskegee classmate J. Reuben Freeman, Stanback had started his first Durham business (Reuben-Rudolph Studio, a mashup of the men's middle names) in 1939.  By 1947, Stanback Studios had opened in this prime location - which was also home to his family - right across from North Carolina College.  The studios pitched their services consistently in publications both for students and the general public. 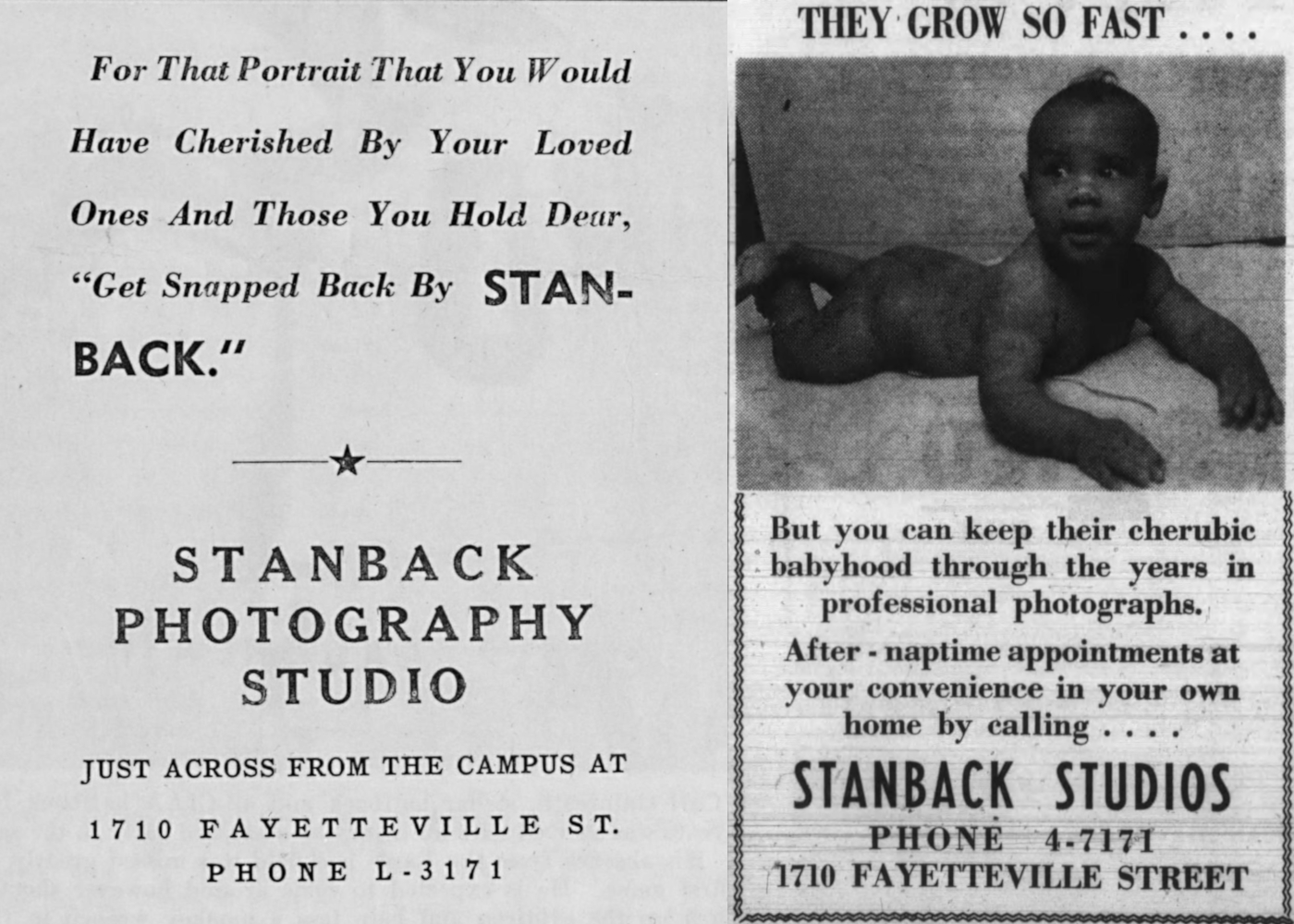 At left: a catchy promotion from the October 1947 issue of The Campus Echo, available via DigitalNC; at right: advertising from The Carolina Times, published 15 November 1952, online via DigitalNC.

Not only did his prints fill decades of family photo albums in Durham's black community, Stanback helped with student films and worked for the college's news bureau.  He also clearly understood the political power of photography in the context of the campaign against Jim Crow injustice.  Stanback and his camera accompanied Carolina Times editor Louis Austin on a late 1952 trip to Caswell County, North Carolina - northwest of Durham.  Austin's words accompanied Stanback's shots to expose segregated - and drastically unequally funded - education for what it was, "a cesspool of crime," perpetrated against black taxpayers and the future of their children.

At left: "a youngster drinking water from a dipper. There being no water on the school grounds, it is brought in buckets by the students a quarter of a mile away."; at right, upper portion: "a white school, located in the same vicinity. It is a modern structure, steam heated, inside toilets, well lighted rooms..."; bottom right: "one of the 23 one-room Negro schools in which one teacher is the instructor for seven grades - first to seventh." (Photographs by C. R. Stanback, source: The Carolina Times, 13 December 1952, available via DigitalNC)

The timing was no accident; Caswell County coverage shared the frontpage with headlines about the beginning of U.S. Supreme Court proceedings on the fateful Brown v. Board case: "Democracy on Trial in the Nation's Capital."

Charles Rudolph, Geneva Stanback, and their family had moved south to a home on Red Oak Avenue by the end of the 1950s, but Stanback Studios continued to operate at the Fayetteville Street location into the 1960s.  Realizing ambitions of expanding beyond Durham, Stanback joined another established photographer - former NCCU colleague and his neighbor at 1712 Fayetteville Street, Alex Rivera - to start a new business from 1967.

American Photographic Services operated in at least thirteen states across the southeast and midwest, and was described by a 1969 Carolina Times article as "the largest photographic company in the nation operated and managed by blacks."  Unfortunately, that same article was reporting on the firebombing of its offices on Cooper Street, near Durham Tech. 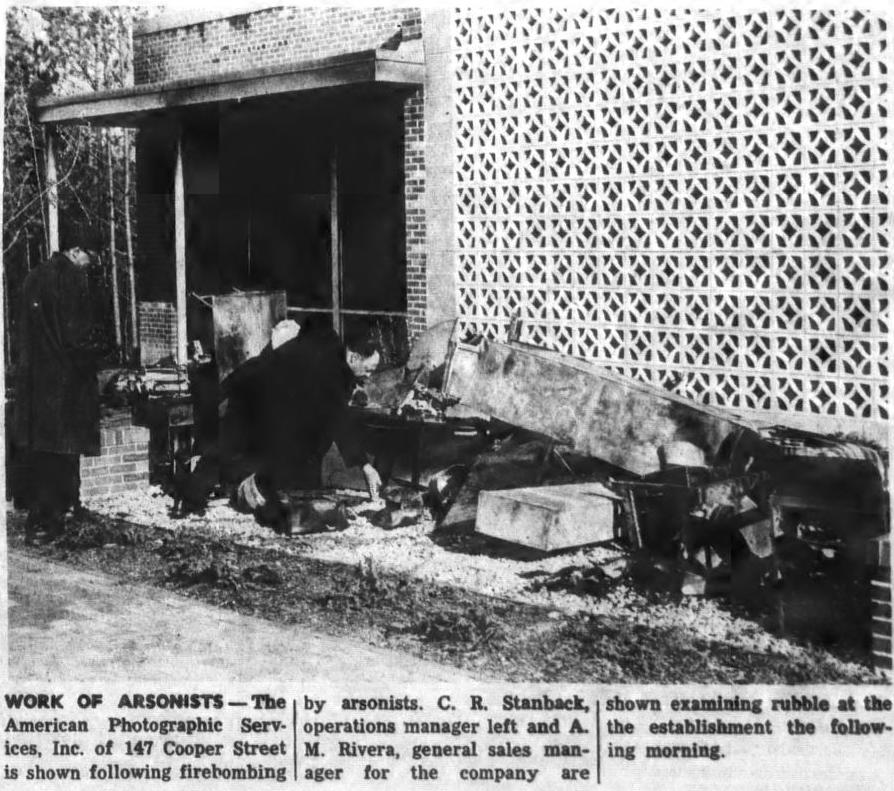 From The Carolina Times, 22 March 1969, available via DigitalNC.

While the exact date for the end of photography studio operations at 1710 Fayetteville Street remains unclear, the Stanbacks owned the house until the late 1970s.  From 1980 to 2015 it belonged to the Kelley family.

In 2000, the house was included as a contributing property in the Fayetteville Street Local Historic District, a zoning overlay designed "to provide a local means of protection for Durham's historic resources."  Under this designation, most alterations to the exterior of the building would require application for a "certificate of appropriateness" from the city's Historic Preservation Commission.  Regrettably, the Commission's powers of enforcement are quite limited.  Based on state law reflected in Durham's Unified Development Ordinance, "an application for a certificate of appropriateness authorizing the demolition...of a structure in a designated historic district...shall not be denied," but can only be deferred for a year - the delay intended to encourage property owners to reconsider.

Most recently, the house was acquired by NCCU, which has publicized plans to expand its current campus northwest of the nearby intersection of Fayetteville and Lawson. 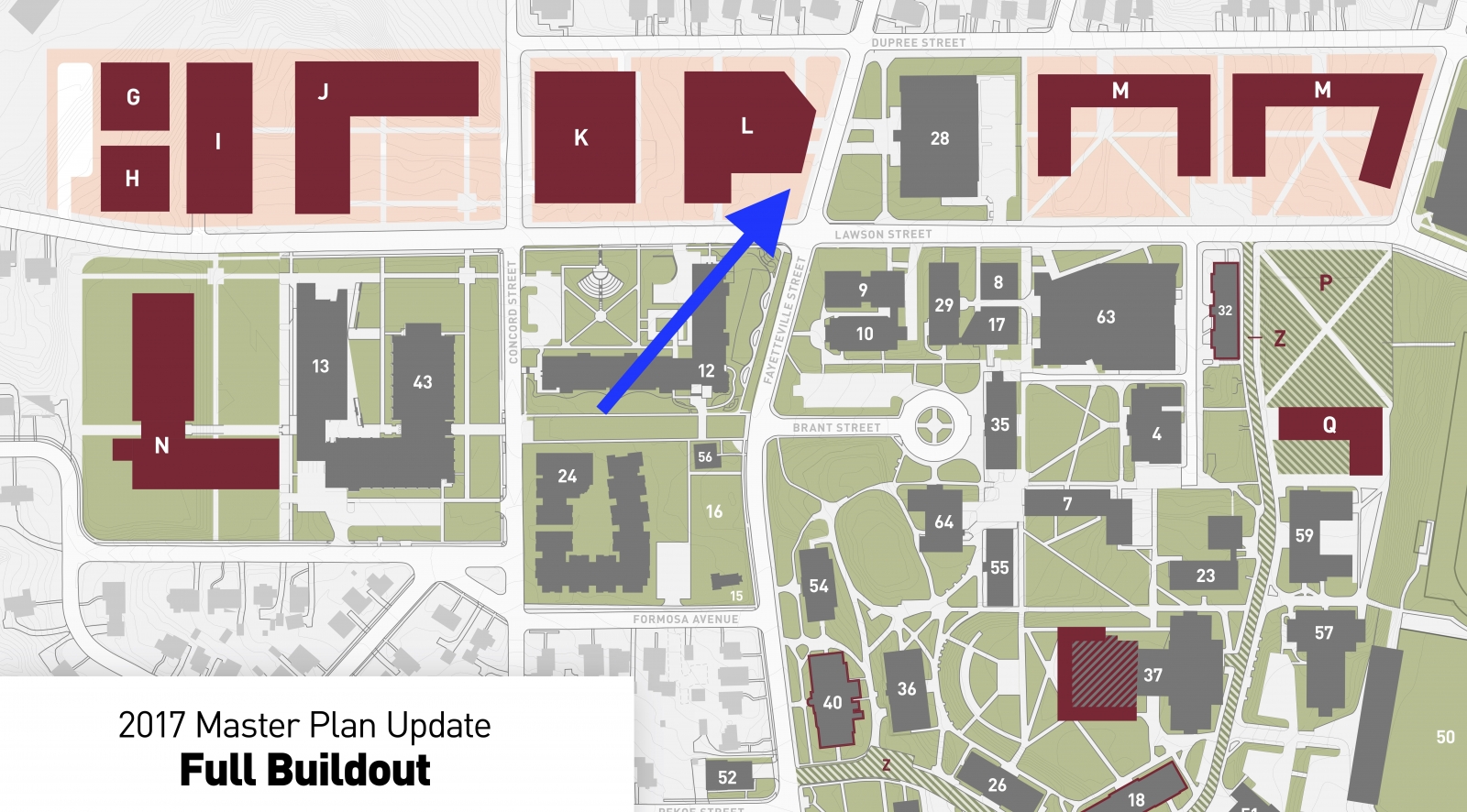 Portion of the 2017 NCCU Master Plan showing a proposed "New Arts Building" - marked 'L' here - at the northwest corner of Lawson and Fayetteville, a footprint including the entire 1700 block of Fayetteville Street within the Local Historic District. (Approximate location of 1710 Fayetteville indicated by arrow)

Though the university has yet to acquire the surrounding properties or secure the zoning changes that would enable construction of the desired facility according to this plan, they applied for a demolition certificate of appropriateness in August 2018.  As explained above, the Historic Preservation Commission is unable to deny demolition, and instead issued its 'approval' with the maximum 365-day delay.

After the expiration of this waiting period, the house at 1710 Fayetteville Street was demolished in April 2020. 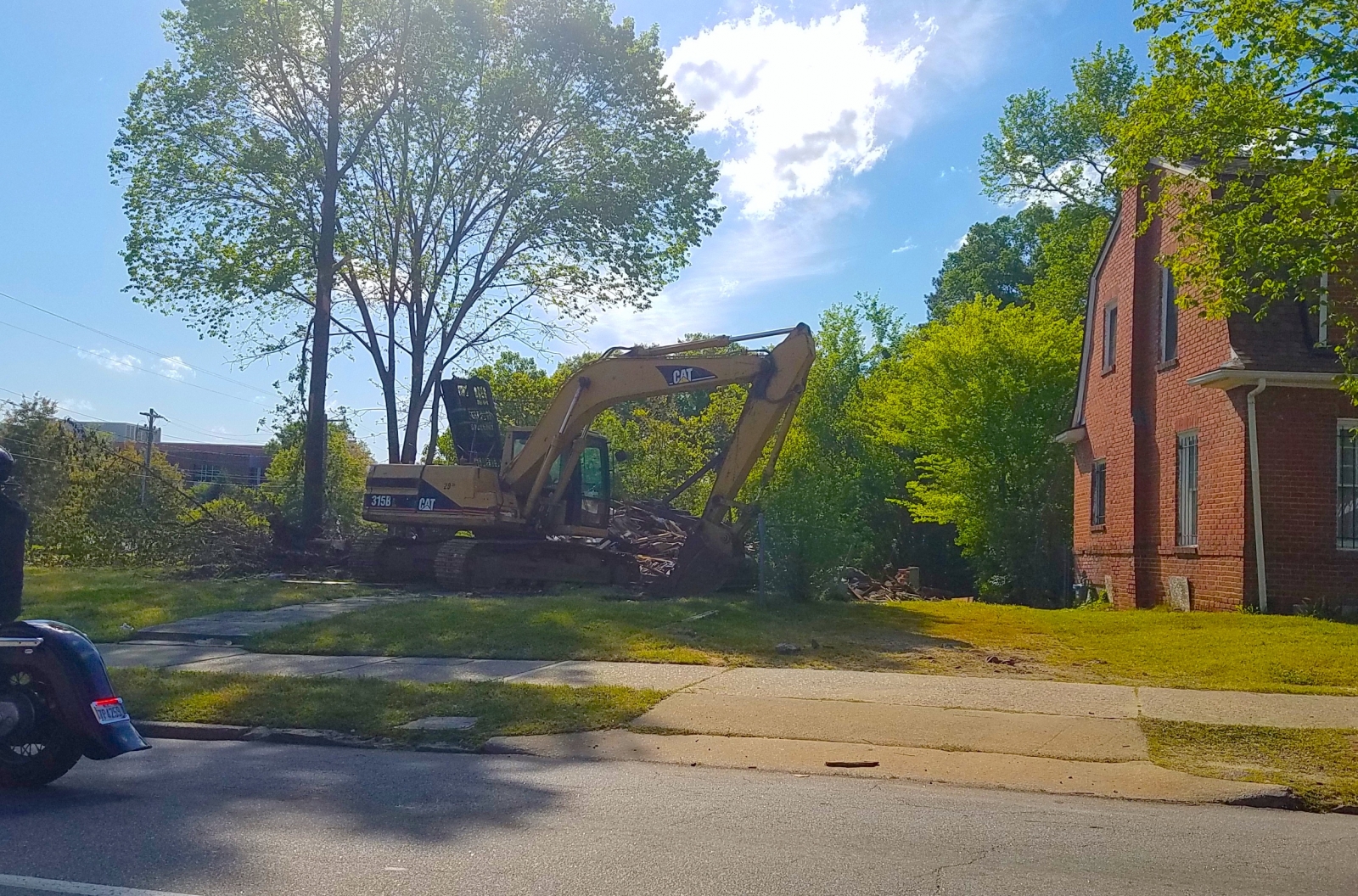