The house at 1620 Duke University Road, owned by Jan Katherine Smith and her husband, has been abandoned for at least a decade now. These are baffling situations that I still can't really grasp - I contacted the owner a few times about 6 years ago about whether she and her husband would sell the house through HPSD, and she stated that they were "going to fix it up." I wrote up information about renovation and financial assistance programs and sent it to them. Multiple people have contacted me about wanting to buy this house to fix it up, and come away from the conversation self-assured that they would be the person to convince the owner to sell the house. They have failed.

I simply have trouble understanding the motivation to pay property taxes and periodically cut the lawn/rake leaves on an abandoned house for ten years. It is clear that the owners have no intention to fix up the property, despite what they may say. They also seem to have no intention of selling the house.

This the crux of the problem with our legal/policy remedies for this problem. This abandoned house exacts costs from its neighbors - the houses on Swift, the converting-to-condos building next door, and the entire West End. In a very prominent spot, it is the gateway of decay as one enters the West End from Duke territory to the west.

What policy remedy do we have? If we call 'Neigborhood Improvement Services' about the house, the result is demolition. But the house isn't the problem - there are plenty of people out there willing to invest the money to renovate this structure, which still has great detail/massing. It is also a very difficult lot to build a new structure on.

The problem is the owners, who do not pay the costs they inflict on the neighborhood. The people at NIS are too bull-headed to consider more creative solutions to this problem.

It's more complicated than that, and typically includes provisions for dealing with economic hardship, stipulations about who can be a receiver, specific aims of foreclosure (whether housing foreclosed upon has first priority for affordable housing), etc.
You can read in more detail here. (You'll need to scroll down - but you can also note on this excellent website how un-creative and backward Durham is in dealing with this issue in comparison with other cities.) We would need state-enabling legislation to create receivership; about 20 states grant their municipalities this power. It has been used quite successfully in many cities with vacant property problems - Boston, Philadelphia, St. Louis, Baltimore, and others.)

What would make everyone happy would be to see the house at 1620 Duke University Road renovated and occupied. Why don't we go about creating policy to reach that goal instead of our currrent policy, wherein everyone loses?

This house finally was released from the grip of its previous neglectful owner, and has been completely renovated. 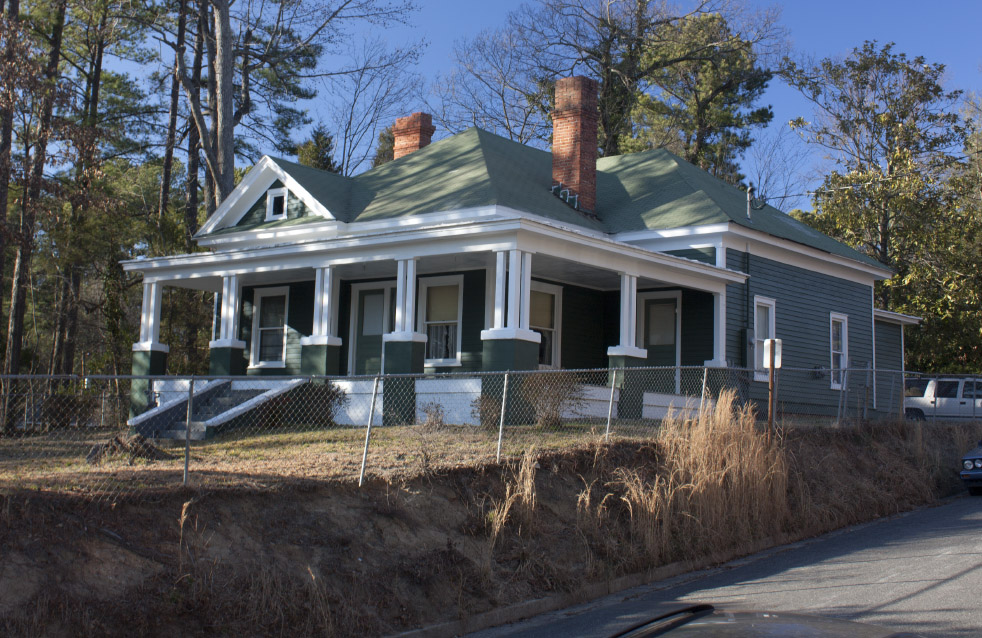 (Below in italics is from the 2010 National Register listing; not verified for accuracy by this author.)

This one-story hip-roofed house is three-bays wide and triple pile with a projecting bay on the left side of the façade. A full-width, hip-roofed ell extends across the rear, projecting from the main hip slightly on each side. A low, hip-roofed addition (likely an enclosed porch) exists behind this, across the rear of the house. The house has a hip-roofed front porch across the façade that wraps around the right side of the house, terminating in the cross-hipped block at the rear. The porch is supported by replacement, grouped posts on painted brick piers. The front door is a single-pane over three-panel front door with matching sidelight. The house is covered with wood weatherboards and has two interior corbelled brick chimneys and one- over-one wood windows. Windows on the enclosed rear porch are a combination of one-over- one, six-over-six, and nine-over-one wood windows. The house stands on a hill above Duke University Road, facing Maplewood Cemetery across the street, and has a high concrete retaining wall and concrete stair along the road. Tax records date the house to 1912, but it does not appear in city directories until 1925, with the address of 1520 West Chapel Hill, when it was occupied by Royal W. and Nettie G. Smith. Smith owned the Royal W. Smith Company, a furniture and home furnishings company in the 100-block of West Chapel Hill Street; the company employed a number of neighborhood residents.

Garage, c. 1925 – One-story, front-gabled, frame garage with shed-roofed addition on the right side. The garage has molded wood weatherboards, an asphalt-shingled roof, a plywood door on the east elevation, and a one-over-one vinyl window on the north elevation. The garage faces Swan Street.

Thanks for writing about this

Thanks for writing about this house. I drive by it almost every day on my way to and from work. Every time I look at it I wish that it would be fixed up. I went to the link and read some from that website. Very interesting. Maybe if a receivership program is ever set up in Durham folks with properties like this will at long last be forced to fish or cut bait. What would have to happen legally for such a program to happen in Durham? Thanks again for your always educational and fascinating research!

Thanks for the comment and the compliment. This house is so visible to so many people - it acts as a signpost for anyone coming from Duke to downtown that they are entering a 'bad area.'

But it is a great house, and I think many people can see the inherent potential.

My understanding is that we would need state-enabling legislation in order to get receivership in Durham. That's obviously a tougher row to hoe than implementing something already on the books. But there are other options, such as expanding the number of designated local historic districts to allow more useful implementation of the demolition-by-neglect provision of our zoning code (as yet untested). Right now, we have a limited number of such districts, which really limits its utility.

So, longer-term, I think receivership is the way to go, but it's going to require quite a few people getting on board.

Receivership sounds interesting but there are problems beyond having legislative authority. How would the repairs be funded? Most of the CDCs in Durham can only operate with federal grant subsidies. This house would require a huge chunk of that money and would be subjected to the strings attached with those funds. There are a couple of private construction cos. that have done an excellent job in the area but it's hard to pull that off in coordination with the city politically in Durham. "Why is the City padding the pockets of a developer? Why is the city taking property for private developer benefit?"

Best scenario would be for the owner to enter into a partnership with someone who has a history of respectfully restoring older homes. They both can profit in the end. If it takes (est.) $150K to restore to past glory and modernize (plumbing, electricity, foundation, etc.), the house could easily sell for somewhere north of $250K (very conservative). It would interesting for Trinity Builders, Traditional Neighborhood Partners or someone to get a hold of this house. It could be the defining gem of the future Burch Ave. historic district.

At the end of the day, the owner has complete control over what will happen to this house!!! For better or worse...

Thanks for your comment. Repairs are funded by the receiver, whether that is the local gov't, a CDC, or a private developer. It is up to the local muncipality (based upon their state enabling legislation) to decide who is eligible to be a receiver. Coordination with the city is only necessary to receive the legal authority to access the property for the purpose of making repairs. There are many case studies out there outlining how this process has been used successfully with both CDCs and private developers, depending on the goals of the community.

You are right on the money vis a vis ownership - the owner remains in control as long as they pay the costs - thus there is no eminent domain involved. But in a crucial way, receivership allows a municipality/community to assume some control to overcome an owner's refusal to abate their nuisance.

It's a long-term strategy, but I think it is the most viable in the long run.

I have noticed that the

I have noticed that the property is now being worked on... any insights on if the original owners are finally renovating?

I've been meaning to update

I've been meaning to update this with that info, thank you anon. The original owners, after letting it sit empty for many, many years (12?) and rebuffing all offers to buy - finally reached whatever unfortunate personal circumstance influences folks with abandoned property to sell. So far, the new owners seem to be doing an ok job.