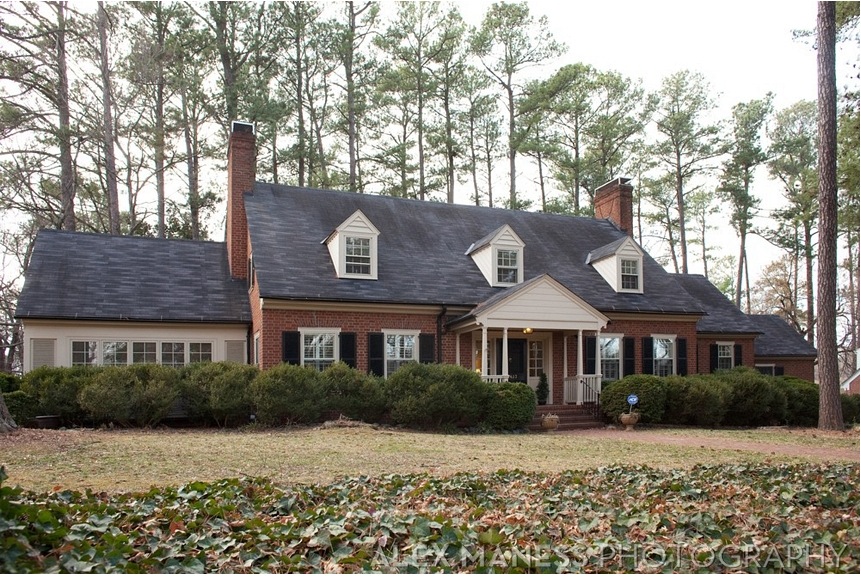 When one of the current owners of the William M. Watkins House entered the foyer as she was house hunting, she immediately knew this was the one. The spaces of this Georgian style house in the Williamsburg tradition were perfect for her family. While the large living and dining rooms may not appeal to many contemporary families, they did to this family. Even though they had lived in contemporary houses, she always preferred a traditional design. Coming from a renowned historic North Carolina family, the Mordecais of Raleigh, she immediately recognized that the things she inherited from her grandmother would fit nicely in these spacious areas.

The house, nestled comfortably in tall pine trees, reflects many of the defining features of Georgian architecture. The simple, side-gabled box design with the centered entrance with paneled door and covered portico is a classic one with windows symmetrically arranged on both levels. The vertical glass panels beside the front door allow the morning sunlight to brighten the entry hall. Chimneys flank each end of the center portion of the house with kitchen to the right and a sunroom to the left. The six-over-six mullioned windows both downstairs and in the dormers above complete the design.

The Watkins House was designed by Archie Royal Davis, who graduated from NCSU in 1930 with a degree in Architectural Engineering. In 1939 he opened his own firm in Durham where he designed many notable public structures and private homes. His buildings have stood the test of time for their sturdiness and their trueness to design. He also built the sister house to this one at 1313 N. Gregson Street. [Despite large commissions such as these, Davis may be most well-known to contemporaneous readers for designing the South Duke Street round houses.]

A bright 12-foot wide foyer with soft yellow walls and white paneled wainscoting, added by the current owners, greets each guest. Built in 1950, the house contains the original wood floors and decorative woodwork, including the mahogany balustrade with its decorative spindles. The shoe molding is stained to match the oak floors and the 8-inch molding at the ceiling painted a bright white creates a striking effect. To the right of the entrance is the dining room and to the left the living room, both supersized. Beyond the dining room is the kitchen with an enclosed rear porch connecting a small paneled den. The living room opens to a sun room to the left and a master suite to the rear. Upstairs are two bedrooms, one large and one small, originally for the Watkins‘ two daughters. The bookcases upstairs were added in 1991, whereas those in the downstairs den are original. Because the house sits on three city blocks, the yard is sizable and is maintained in a natural state with ivy on the front bank and magnolia trees in the rear.

The house was built in 1950 for Dr. William M. Watkins and his wife Elizabeth Bizzell Watkins, who married in 1925. The area that now comprises Duke Park was originally owned by Brodie L. Duke, an older son of Washington Duke who made and lost most of his money through real estate transactions. In 1931, William Watkins bought Lots 26 and 27 and part of 25 from the Duke Land and Improvement Co. In 1945 Louise Watkins sold to her brother the other part of Lot 25. The house was built in 1950, based on the fact that the 1949 City Directory showed no listing for 1423 Acadia but in 1950 the Watkins were shown as residents here. Sometime later Watkins built a house next door for his maiden sister Louise, who taught math at Durham High School for many years. Watkins was a physician who had an office [in the Trust Building] at 212 W. Main Street. After his retirement, he and Elizabeth continued to live here until 1981.

In 1981 Darrell Paul Nelson and wife Barbara S. bought the house from the Watkins. Reportedly, they enclosed the side porch to create the sunroom and added the bar. He was pastor of Grace Lutheran Church for a number of years and parishioners recall attending concerts with small groups in the living room. They lived there for nine years and in 1990 sold the house to Alan and Nancy McNabb. The current owners bought the house in 2007. It’s remarkable that this sixty year-old house has housed only four families.