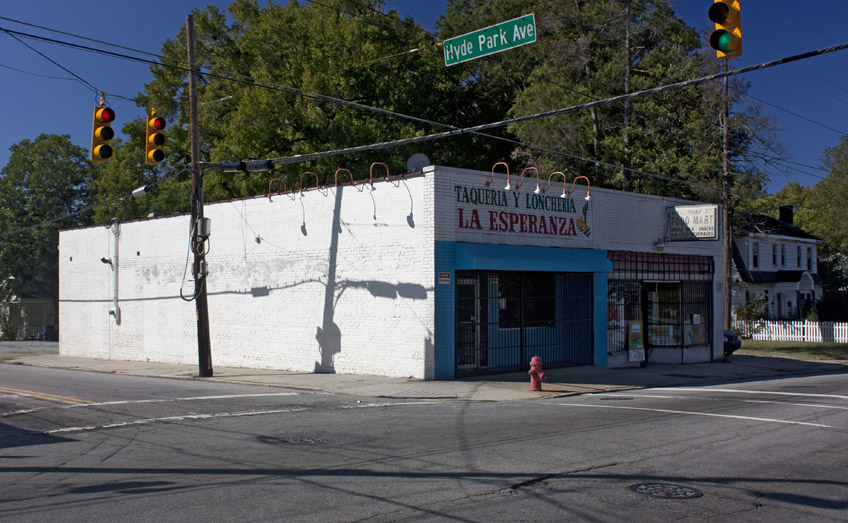 Delicious Brunswick stew at Adcock's, and at the risk of starting a fight, better than Bullock's! And a cherry Coke at the drugstore after school hit the spot.

Didn't Adcock's also sell containers of BBQ and brunswick stew in supermarkets back then?

In the 50s the drug store

In the 50s the drug store pharmacist was Mr. Snead. They also made the best grilled pimiento cheese sandwiches. This was where you went when the snack hut at Long Meadow Park didn't satisfy your hunger. Adcocks - didn't it move downtown near Trinity Methodist church and the barber school? Anyone remember their pies?

Mr. Snead lived in the 2700 block of University Drive while running the drug store for many years.

Two distinct memories associated with the Drugstore during the 1952-1956 time frame. Because the store was diagonally across the street from Holloway St Elem School, I passed it twice a day going to and from school. Going home, my brother and I would stop in for a Cherry Smash. This was fountain concoction of cherry syrup, crushed ice and carbonated water. A real treat anytime, but especially welcome as the season warmed.

The second memory is associated with cinnamon toothpicks. For whatever reason (probably because they were easy to smuggle into the school), cinnamon-flavored toothpicks were big with myself and my friends. The drugstore carried little vials of Cinnamon Oil into which we dipped wooden toothpicks.

And that reminds me of one more purchase I often made at the drugstore: Luden's Wild Cherry Cough Drops. This one I know for sure we bought because it was like candy, but because it was "medicine", the teachers would allow it in the class.

Someone might remember that Adcocks was down town near the Criterion Theater. When Mr. Adcock started getting some age on him he sold out downtown.He and his daughter opened the little carryout cafe(for a better word) on Hollaway St.
The food was delicious and it was put in small indiviual containers.
The 2 cooks in back cooking and filling orders.
Mr. Adcock stood at the pass through window and bagged it up and handed it to his daughter who rang it up on the register and sent you on you way with a good meal.
After his health really got bad they just closed up and both retired from the business.
Did have many a good meal from there and they were good folks.

Yes, this corner is

Yes, this corner is remembered in many ways by hundreds of Durham people.  Having moved to Durham in 1948 to Spruce Street, I started to school in September 1950 at Holloway Street School.  I also remember that the cough drops and the bottle of cinnnamaon toothpicks were banned by the teachers.  But that didn't stop one of my classmates from hidding one in his pockett.  The teacher did not know a thing about it until the bottle leaked out onto Ted's leg at which time everyone on the first floor became very aware that Ted was in much pain.

A lot of things were available at Holloway Street Drug Store including a five cent or a ten cent pack of Blue Horse notebook paper.  I also remember Mr. Snead challenged a would be robber which resulted in the robbers gun firing a hole in the marble type floor which did little damage and the robber fleed.  Everyone from ten blocks around came to see the hole in floor.  Beside the drug store was Inscoe's Grocery and on the opposite corner was another grocery I think was called Fowler's.  Beside Fowler's was POPs Cafe'.  My first meal every eaten away from home was a hot dog in one of POPs booths(along with a twelve ounce Pepsi).  Across the street from the drug store was Coleman's Gulf of which Mr. Coleman helped many people that were in need.  Behind Fowler's was Hyde Park Barbar Shop where I had my hair cut many times and still do at the shop's new location.

As a school safety patrol, I have stood at many of the corners in this area.  I also remember that Holloway Street was Hwy 70.  All traffic going west or east used this route including the Trailway and Greyhound busses. So, on boring nights and week-ends, a crowd could hang out at this corner.  This corner had a letter box, a trash can and a fire call box.  The first one to show up sat on top of the trash can.  If anyone in the area needed a fire truck, they would run from blocks away to get to this fire box, open the box door, retrieve a little metal hammer and break the glass, wait at the box for the fire truck to come and tell them where the fire was.  You could hear the fire truck, which was at #1 station downtown at Mangum and Holloway because at that time they did not use a muffler on the ehaust.  It was loud!

I remember when the school consisted of just the front part of the building.  Years later, the west wing was added.  The east wing was added after I left the sixth grade.  Lots of good memories and good teachers.