425
West Main Street
Durham
NC
Year built
1905
Year demolished
1980
Construction type
Masonry
Brick
Neighborhood
Downtown Central
Use
Restaurant
Bank
Furniture Store
Auto Dealership
Glass Company
Building Type
Commercial
Can you help?
You don't need to know everything, but do you know the architect?
Log in or register and you can edit this. 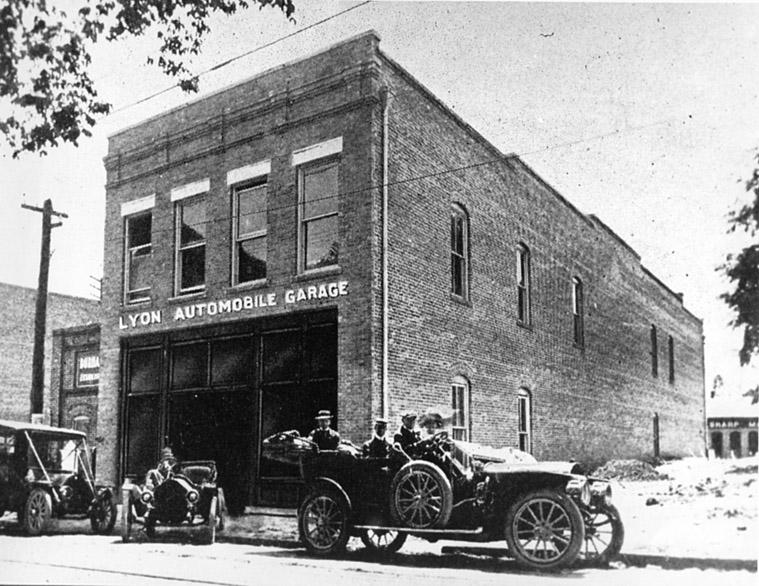 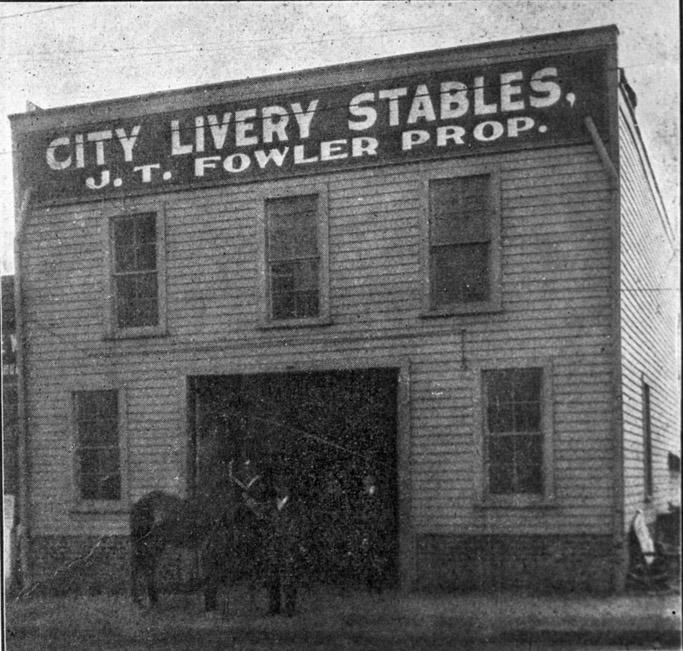 While Five Points had, by the 1920s, become a focal point for commerce and the public center of Durham, during 1880s-1910 period it had no distinctive character. With the ongoing growth of the the Duke Factory to the west, and the hub of business to the east (Main St. between Corcoran, also known as Depot St., and Mangum St.,) the area became filled with combinations of frame factories, warehouses, stables, and residences.

The Fowler Livery Stable was likely the first structure built on the parcel of land that would become 425 West Main St. It is described thusly in a 1905 mercantile directory:

"The City Livery Stable - Corner Main and Chapel Hill Streets near Five Points. The above enterprise has been established for about one year and has already made its presence felt in the community. Mr. John T. Fowler, the proprietor, is a new man and has opened entirely new stables, where he is at the disposal of the public for the hire of vehicles and horses at all times. The stables are large and spacious and will accommodate 35 head of stock. Mr. Fowler owns 20 horses of his own as well as 25 turnouts of superior description. These are rented at the lowest responsible terms. The best facilities are at hand for the proper management of the business and attention and courtesy are the distinguishing characteristics of the house. Mr. Fowler is a man who thoroughly understands animals and has the fullest confidence of his patrons for fair dealing and business integrity."

Wyatt DIxon notes that the Fowler family came to Durham in ~1903 from Chapel Hill and moved to the house located next to the stables, at later 431 West Main St. and Great Jones St. Fowler had been in the livery stable and ice business in Chapel Hill prior to coming to Durham. He would soon move the stables south across East Chapel Hill St., and soon thereafter, one block west to the later location of the Belk-Leggett department store. In 1913, he became a brick manufacturer with kilns located across Angier Ave. from the Virginia-Carolina Fertilizer Company. He moved to Hillsborough after buying a brick business there, then moved to Chapel Hill again, where he started a "flour business," which became a grocery store. He suffered a stroke, and his son Robert returned to Chapel Hill to become proprietor of the grocery with his brother Marvin.

This would become Fowler's Grocery, of longtime tenure in Durham.

In a direct usurpation of the earlier transportation technology, the livery stable at 425 West Main was replaced by the Lyon Automobile Garage, an endeavor of George L. Lyon and Buck Lyon - grandsons of Washington Duke. George Lyon had started a machine shop prior to 1900 with WIlliam L Bryan, which they located in the basement of the original First National Bank building. Per Wyatt Dixon, they 'made' the second automobile to "ever appear on the streets of Durham," after Robert Hackney's Stanley Steamer in 1901. It appears that they crafted the car themselves - a "high-wheeled, Durham-produced automobile. It was one-cylinder, chain-driven, and developed eight horsepower."

Sometime between 1905 and 1907, Lyon, listed as "electrical contractor and automobile manufacturer" moved into (and possibly built) the two story masonry structure that extended from West Main through to West Chapel Hill St.

Looking south from West Main St., ~1910. The Durham Marble Works building is partly visible immediately to the left at 423 West Main, and the TO Sharp Monument Company in the background.
(Courtesy Durham County Library)

It appears that he was soon in business with his brother Buck Lyon, who took over day-to-day operations of the company as George became more involved in other endeavors - including his passion for marksmanship, which would lead him to represent the US in the 1912 Stockholm Olympics. In 1910, the firm and their building were described in another mercantile directory:

"With the advent of the automobile, new industries have sprung up, and new mercantile houses formed, having as their object the sale, storage, and general repairing of these machines. Durham has a worthy representative of this line of business in the new and up-to-date establishment of the Lyon garage, under the proprietorship of Mr. EB Lyon. This is a two-story structure, 37 by 137 feet in dimensions. This ample room is given for the display of the machines on sale, the storage of those using the garage and for the repair of those disabled. The entire building is utilized in the interests of the business. A competent staff of skilled mechanics is employed, and immediate attention can be given at any time to repair work."

"Mr Lyon has the agency for the district for the now famous Reo and the Hupmobile cars, and has already placed many of them in the city. EB Lyon, who established the business a little over a year ago, is himself thoroughly familiar with every detail of an automobile. This, coupled with his up-to-date business methods has resulted in the building up of a successful business. He is a native of Durham and has spent practically his whole life in Durham...."

George Lyon would, unfortunately, die in 1916, at the age of 35, from tuberculosis. The company became the EB Lyon Motor Car company, but by 1919 was out of business and EB Lyon is listed as being in "tobacco." So much for the attempt to break from one's roots. The "Durham Battery Service Station" and the "Willard Service Station" are both listed at the address in 1919. 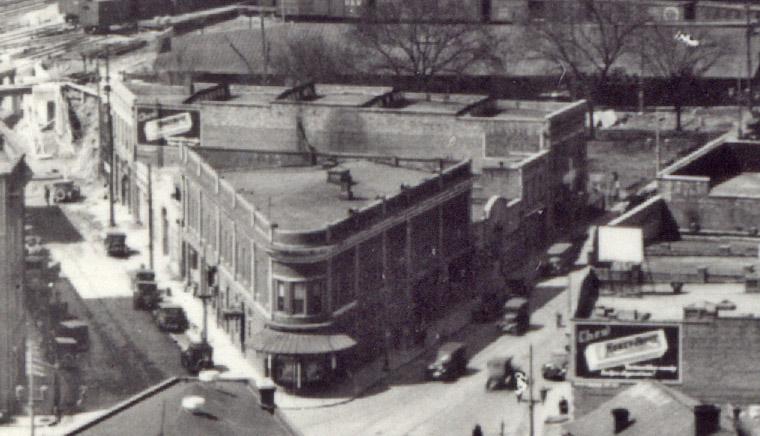 1926 view west from Five Points, showing the two-story structure as the western 'bookend' for the shorter structures between it and the Five Points Drug Company.
(Courtesy Durham County Library) 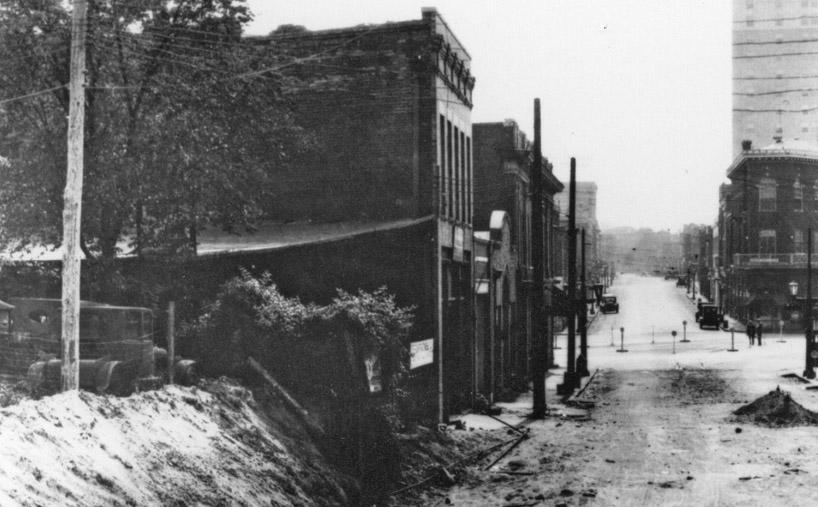 1926 view looking east from the railroad underpass construction, with the 118 W. Chapel Hill St. facade of the building on the immediate left.
(Courtesy Durham County Library) 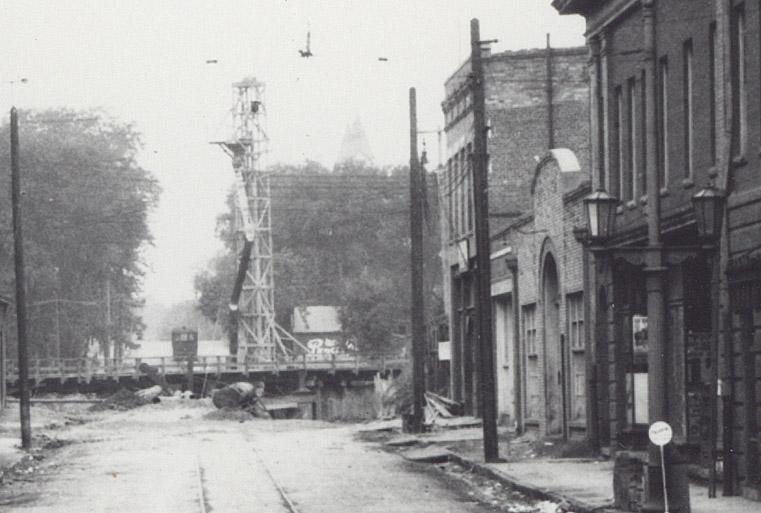 By the 1940s, the building housed the Carolina Glass Company, started by Norman Benson in 1929. 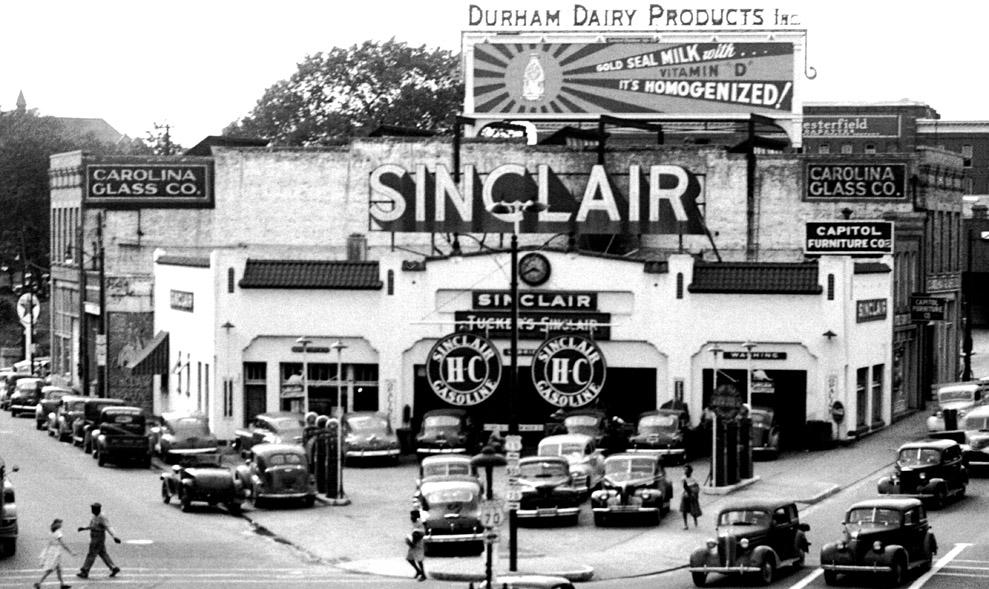 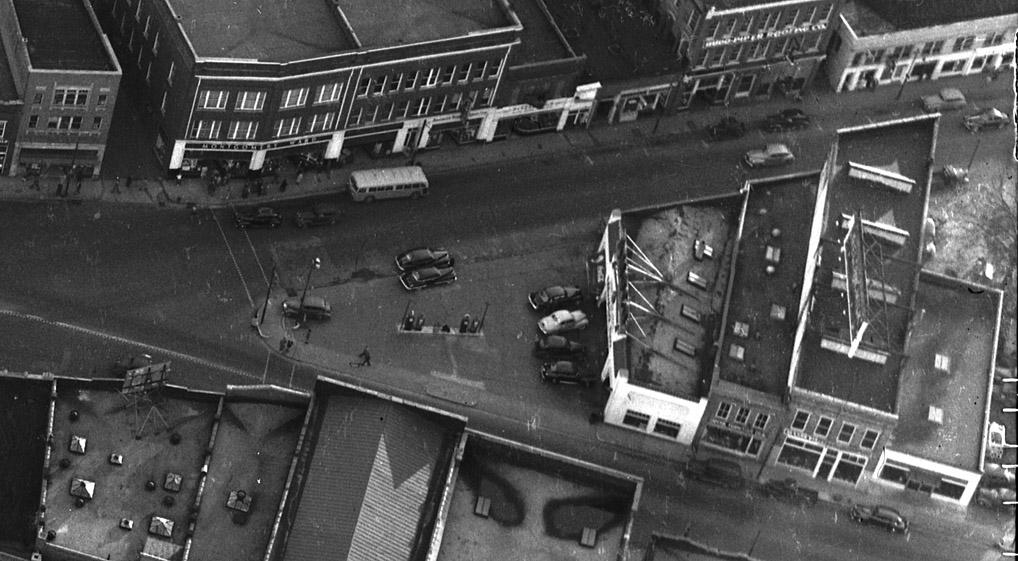 In 1947, Benson built a new building for his company at 307-309 West Pettigrew St.; the Capitol Furniture Company, which had been located at 423 W. Main, then occupied the building. 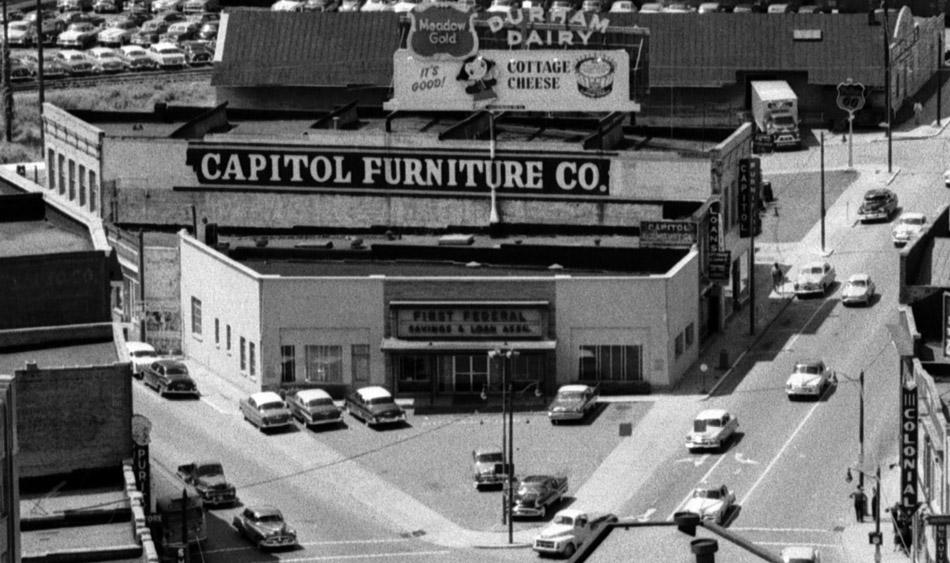 Between 1957 and 1963, the building underwent a very heavy-handed renovation by First Federal Savings and Loan, which had already 'modern-ified' 423 W. Main St. a few years prior. 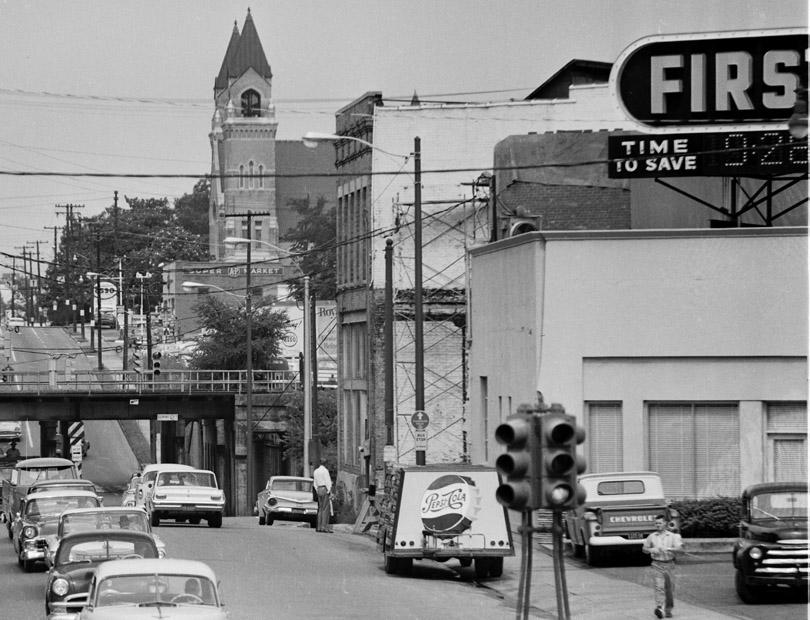 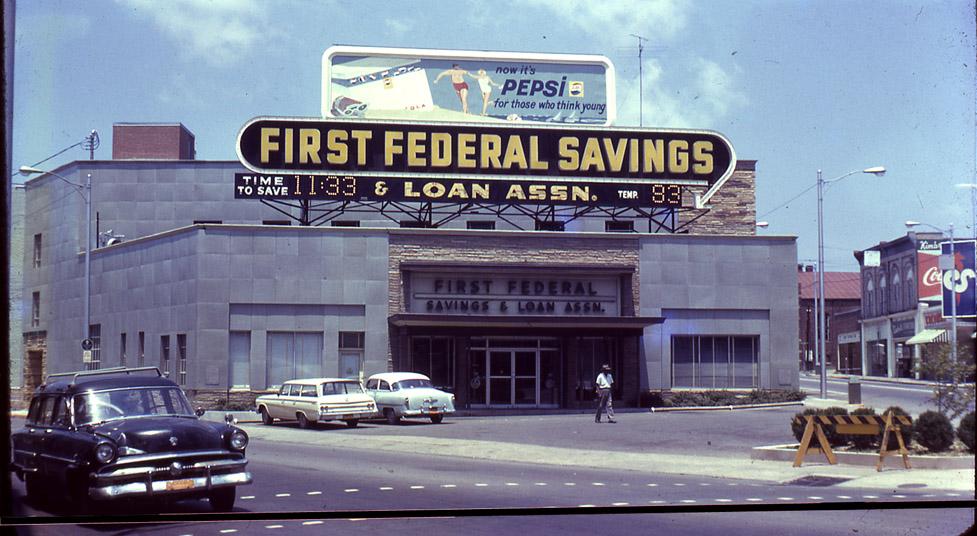 Five Points, looking west, 1964. It appears that 423 and 425 were both covered in stone and metal tiles.
(Courtesy Durham County Library) 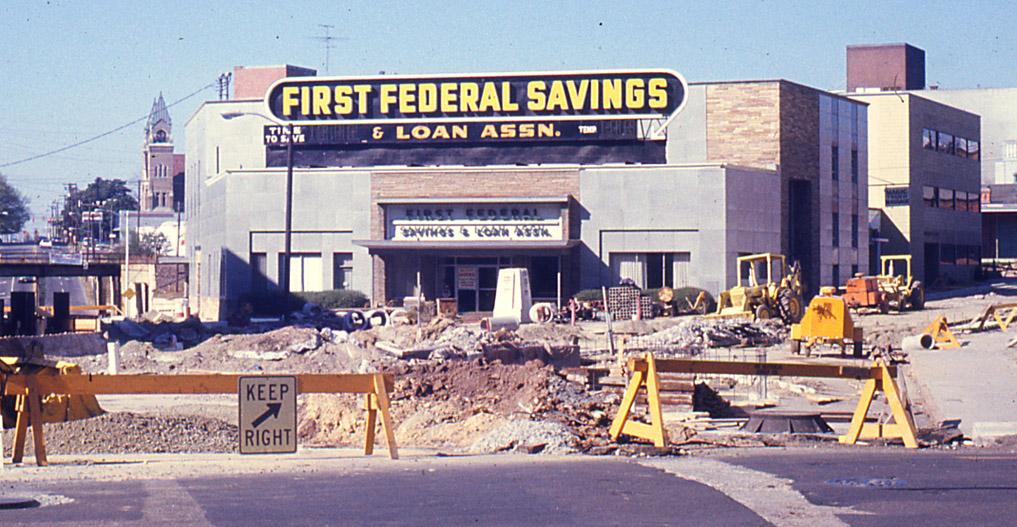 ~1973 view looking west from Five Points, during the one-way conversion of Main and Chapel Hill St. You can note the addition of the Professional Center Building to the western end of the stack.

By 1974, First Federal had moved to their new building across the street and abandoned 423-425 West Main. 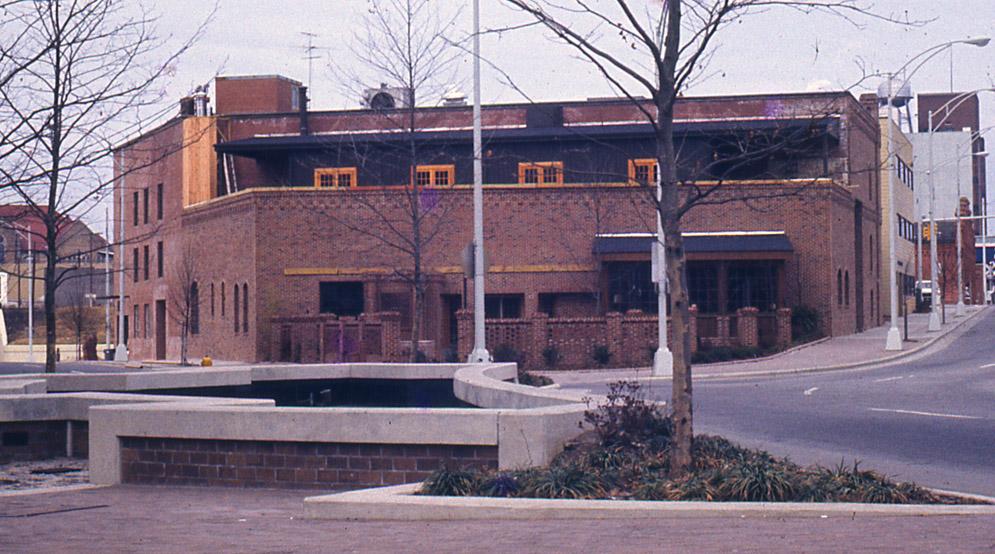 The restaurant was not a commercial success, and the buildings sat empty for a period. Sometime around 1980, a homeless individual seeking shelter during winter died inside one of the buildings, and this prompted the city to move forward with tearing down the structures. 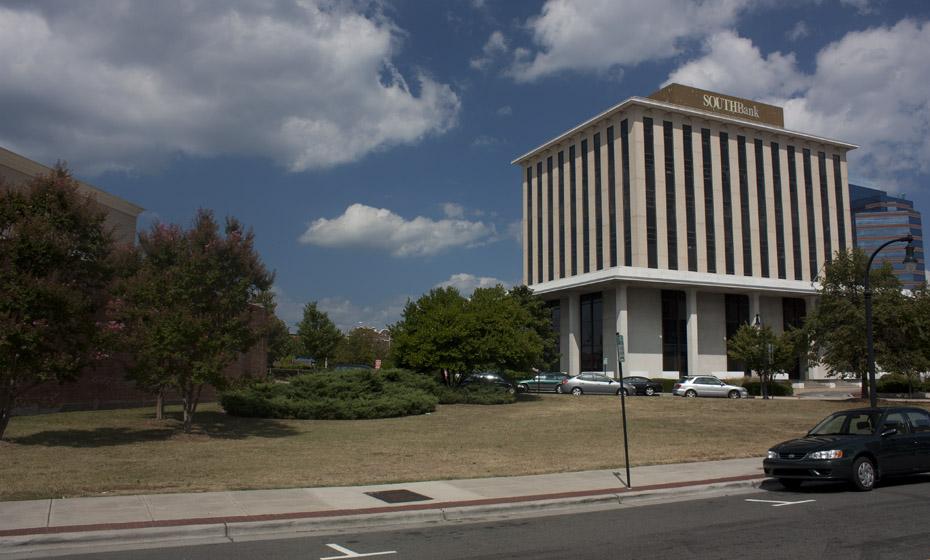 The 425 parcel, along with those to its east forming the western point of Five Points have been owned by Anna Ho Whalen since that time. I'd love to see this site redeveloped - but I suspect, given that it never arises in development conversation, and has sat vacant for 30 years, that the prominent position of this land and difficulty of development there means that there is a significant gap between the owner's perceived economic value of the land versus the real market value.

Which is a shame, because I think for downtown Durham to realize its full walkable, urban, streetlife potential, the three empty corners of Five Points (including Southbank) need to be redeveloped with storefront buildings. With Greenfire in charge of Southbank and Self-Help the owner of the large surface lot that dominates the eastern 'point', there is at least the potential that real buildings may someday appear on those sites. I suspect that this one will remain vacant long after that.

Good series, Gary.
I love the old ad signs
in these pics.

I really think that this lot would be the perfect location for some food carts and trucks to set up shop on a regular basis. Enterprising concessionaires could work with DDI and the city to get some picnic tables and electricity hookups (to prevent the fresh diesel smell caused by generators) and then have a regular food court for lunch time.

This sort of use could be used as the land is stuck in its purgatorial 'land bank' status.

I think you've got your bearings off on two of the 1926 photos. Isn't the second one looking east towards downtown and the Washington Duke Hotel, and the bottom one looking west towards the overpass construction?

Thanks Rob - you are absolutely right. - Fixed.

Anna Ho... good luck getting her to build or sell.. she is responsible for razing three structures in Hope Valley, two very significant....