217
West Geer Street
Durham
NC
Year built
~1939-1940
Year(s) modified
2010
Use
Residence
Bed & Breakfast
Apartments
Building Type
Residential
Can you help?
You don't need to know everything, but do you know the neighborhood?
Log in or register and you can edit this. 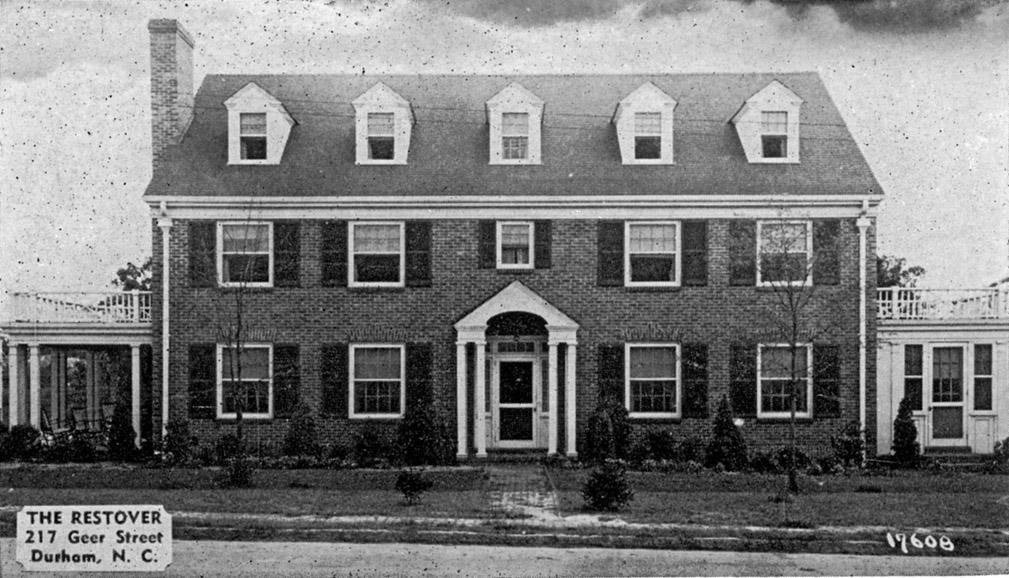 Carl C. Woods, a general contractor later known simply as "CC Woods" built the large house at 217 West Geer St. around 1939-1940. It evidently served solely as the primary residence for him and his wife until about 1948, when they opened a 'tourist hotel' (a bed-and-breakfast of sorts) in their home. The obverse side of the above postcard reads:

Running Water in Rooms
US Highway 15 and 501
Durham NC"

The Woods evidently lived in the house and ran the Restover until 1959, when it appears they moved elsewhere, and the house became an apartment building. It appears that it has been such ever since, albeit in ever-declining form as the neighborhood fell on increasingly harder times. Most recently, it appears to have suffered from a bad case of off-the-rack-window home depotitis. If the window doesn't fit, just shrink the opening. 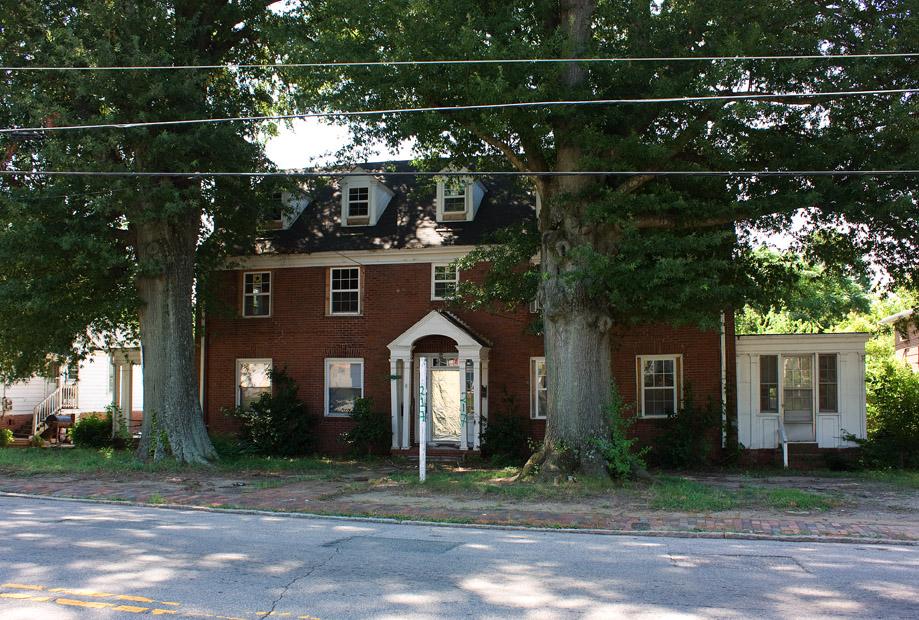 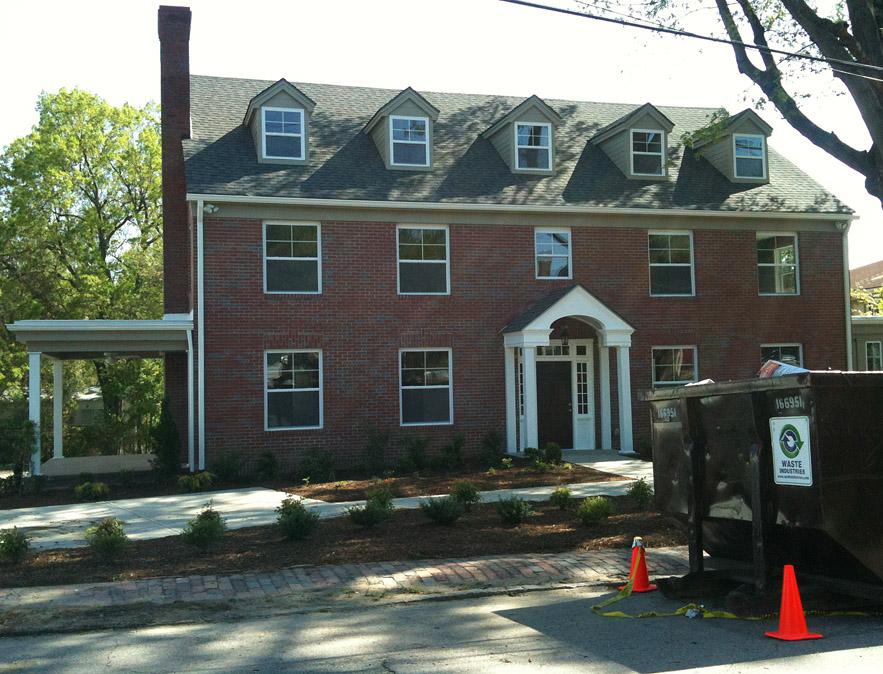 Wow, but those two trees have grown!

Before he simply became a name on cake mixes, Duncan Hines published travel guides called "Adventures in Good Eating" and "Lodging for a Night." When I was a kid, my mother used to swear by his recommendations.

Anyway, I still have a 1947 copy of "Lodging for a Night," and it mentions the Restover. Here's what he says:

Just as a point of comparison, the Washington Duke was also recommended ("thoroughly modern in every detail") and charged "$4.00 up."

So it obviously became a tourist home before 1947. I wonder if they built it with that in mind? Or, since Duncan Hines called it "old", I wonder if they simply greatly expanded an existing structure? Do you happen to know what was on that site earlier?

What has happened to it is awful.

Thank you! I've read about those guides, but I've never seen one. I researched this by going through each city directory. The first one that I found the Restover listed in was 1948. There was nothing on the lot in 1937, and the address 217/ CC Woods doesn't appear in the city directory until 1939-1940. I think Mr. Hines just assumed that it wss more colonial than colonial revival.

Isn't the for sale sign still in front of the house? I don't see it in the picture. It has been on the market for months.

I know El Kilombo was trying to raise money to buy this house to have a permanent location.

I think I did see a "For Sale" sign, but I couldn't find a listing online.

anonymous is correct, the home is listed by America's Best Realty for $235,000:

Property being Sold 'AS IS'. This is a 6 unit multi family building. A lot of renovations have taken place already. New AC units, windows, ceramic tiles, wiring, etc. Building comprised of 1 to 3 bedroom units. Must see, great for an investor to complete the renovation work. Three story building with a basement.

Don't we have enough of these local vandals without importing them from f**kin' Texas as well?

yeah, those trees are amazing

the window thing drives me insane! how can they even get away with that and call it a renovation? and ask a price for it!? bah.

Slumlord real-estate speculating is a long-standing Durham tradition. I see not much has changed. *sigh*

Recognize that you're blessed to have community members who care what happens, and be thankful that you're not out here living in *ahem* "f**kin' Texas". It's worse than you can possibly imagine. :)

A renovation can (and often does) include bad additions, undersized cheap windows, gutting original trim, etc. and etc.

A restoration, however, is when you [are supposed to] "do it right."

Some knuckleheads, however, like to use the term restoration when they really mean renovation.

This is so sad to look at this house. What a grand house that has been carved up, and architecturally "f'd up" with its pathetic attempt to renovate. Those windows themselves are enough to make me not even want to look at the place. Again and again, the attempt to get the absolute most financially out of, by doing everything on the absolute cheap seems to rule. Quality workmanship, and a concern for your community and the structure itself gets thrown out when a property pimp like SJM's gotta make that buck...

It actually went through a foreclosure a year or two ago. SJM was the lender and took it back.

Are those two 'sticks' in the old picture those grand trees that stand today? What an awesome sight!

The "rennovation" leaves much to be desired. Ugh. Out of state investors. What do you expect?

During the "City Hall this Week" program on TV it was mentioned that the city has obtained $2.1 million in stimulus dollars to stabilize struggling neighborhoods. Included among these are the many multi-unit buildings on W. Geer, and 217 W. Geer was specifically called out. Apparently the building will be repaired (renovated? restored?) for use by a group called CASA.

I was unable to find a video archive of this weeks program, but some info is on the City's web site.

I was looking back at this post. Haven't seen any action occurring at The Restover. I found the link to the City Hall This Week episode from June 16 here:

This house is for sale by owner (the lender who foreclosed on it), The owner can be reached joez@rockstone.com, seller can pay a referral or finder fee of 3%

Just in case the reverse of the postcard isn't in your files.  Found on Ancestry.com in its postcard records.