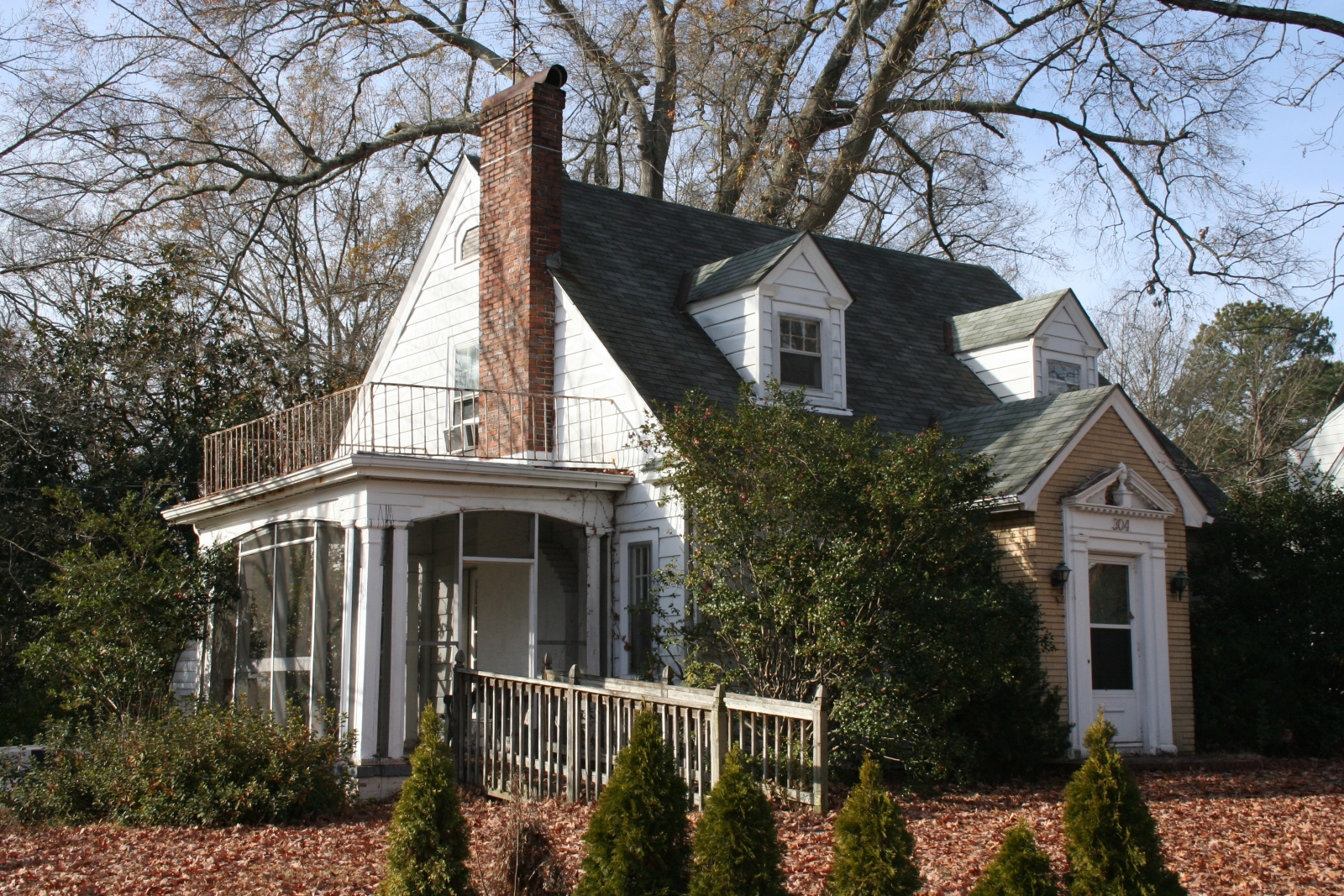 This one-and-a-half-story, side-gabled, Minimal Traditional-style house is three bays wide and double-pile with characteristic flush eaves. The house has aluminum siding and six-over-six wood-sash windows, including single windows in each of the two gabled dormers on the façade and paired windows in the side gables. The projecting, front-gabled entrance bay has a blonde brick veneer and six-panel door with classical surround with fluted pilasters and a broken pediment with modillion cornice. There is an exterior brick chimney on the left (east) elevation and arched vents in both gables. A flat-roofed porch on the left elevation is supported by grouped square posts with arched spandrels and has been enclosed with screens with a later wood ramp accessing a screened door on its façade. A fifteen-light French door to the rear (south) of the chimney opens to the porch. There is a wide, shed-roofed dormer across the rear elevation and a one-story, gabled ell at the right rear (southwest) connects to a front-gabled, two-car garage that faces Concord Street to the east. The garage features two four-panel-over-four-light-over-eight-panel doors. A brick wall extends across part of the southeast corner of the property along Concord Street. The house appears on the 1937 Sanborn map and the earliest known occupants are Llewellyn M. Barry and his wife, Ethel Berry, in 1945. Llewellyn Berry was a land surveyor for the NC Mutual Life Insurance Company and owned the Berry Company, that erected his and several of his neighbor’s houses. Ethel Berry was an administrative secretary to C. C. Spaulding at NC Mutual Life Insurance Company.

On December 20, 1935, North Carolina Mutual Life Insurance Company sold a large parcel of land to Mr. and Mrs. Berry where they build their home.  They owned several parcels of land all over Durham, including lots .around the Durham Hosiery Mill on September 13, 1945.

On November 22, 1955, L.M. Llewellyn and his wfie sold the property to their daughter, Bobbie Berry Lundy.  Mrs. Lundy and her husband, James Lundy sold the property to W.R. Collins and his wife, Alice P. Collins on June 18, 1957.  On September 17, 1984, the Lundys sold their home to Beatrice Brame.  Ms. Brame lived in the house until she sold it to Rick L. McConnell and Justice F. McConnell on December 20, 2005.  On the same day, Rick McConnell transferred the title to Justice McConnell, who lives at 305 Pekoe Avenue.  The house is now rental property.