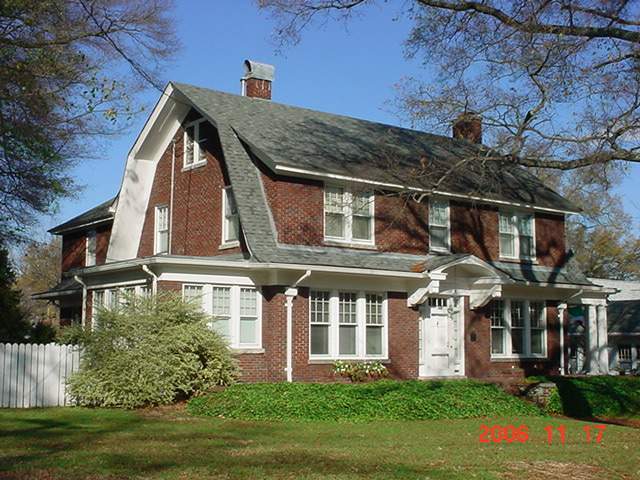 Circa 1930 two-story brick-veneered Period House with broad symmetrical three-bay facade, tall gambrel roof with almost full-facade shed dormer, and gabled hood supported by consoles above trabeated entrance surround. Patio runs across main facade, which ends in a short, flat-roofed one-story wing on the west and a flat-roofed porch on Tuscan columns across the east elevation. The earliest known occupant was J. Otho Lunsford, manager of The Depositors National Bank Building on W. Main St., who lived here in the early 1930s.

1926     J.O. Lunsford builds the house and moves in with his wife, two daughters and mother-in-law, Mrs. Mesley, from their house on Mangum St.

1930   Mrs. Mesley's sister moved in when her husband, William Israel died.  He was president of American Cigar Company (part of American Tobacco) and they lived on the East River in Greenwich, Connecticut.

1939    Laura Ellen Lunsford marries Hack David Emory and moves out.  They stay in Durham, and build the house at        1105 Gregson St. where they have two daughters and live until Hack Emory dies in l946.

1946    Laura Ellen Emory moves back bringing her two daughters when her husband dies.

1975    Mary Ellen Emory Luikart moves in with her husband and son.

Clark Whitney Luikart - born Cleveland, Ohio - 1943 -Clark finishes his PhD. at UNC and begins work as an administrator in the UNC Medical School.

Section V.   Original and Other Significant Owners of the Structure

He retired and gave up his downtown office in the 1930s. After that he managed his own rental property until the mid 1950s when it was sold.  All this time he also was on the Board of Directors for Auston-Heaton Company/Oconeechee Flour, Durham Hosiery Mill and Depositors National Bank.

J.0. Lunsford put the property in Laura Emory's name in 1957 so that she and her two daughters would have a place to live after his death.

When Laura Emory died in May 1975, Mary Luikart and her sister, Margaret Haynes, inherited the house.  Mary bought her sister's part and she and her husband and son moved to 1014 in the fall in 1975. When she divorced in 1993, she retained the property.

1930    The rear of the house was changed to enclose the screened in back porch on the first floor and a bedroom and bath were added upstairs when Mrs. Israel came to live there. (see attached plans)

1930's   The garage was built and the driveway added.  When the house was originally built Markham Ave. was a dirt road and the horses were kept at the livery stable.

Pertinent or Interesting Information about the Property, its Owners, Residents, or History.

When J.O. Lunsford built the house in 1926, he wanted to tie it in with the house where he was born in Person County.  His cousin, Miss Bess Daniels, still lived there and he got two bricks from the foundation (this was a wooden house) that had been brought over by ship from England in the 1700s. He had "1926" carved on one and "1760", the date when the Person County house was built, carved on the other.  These bricks are in the buttresses at the front steps.

Originally the property included the lot to the west.  The yard was divided into three sections. The lot on the west side was a plowed vegetable garden that Mr. Buck Clemmons at 1022 and JO Lunsford shared.  Then in the 1950s this lot was sold and a house built there.  The yard beside the house had a big rose garden, flower beds and grass.  The part directly behind the house was fenced in with a gate next to the garage. Inside the fenced area there was a small cherry orchard, a group of Damson plum trees, 5 or 6 fig bushes and the clothes line. There was a chicken yard that ran straight back from the sides of the garage to the back line with a wire fence with roses growing on it.  At the back of this yard was a chicken house about 20 feet long.  In the late 40s or early 50s the city passed an ordinance forbidding keeping poultry in the city and so the chickens left, but the chicken house wasn't torn down until the late 60s.

Then in 1976 the fence, old bushes and trees were removed and the yard smoothed into one large yard.  Later this was fenced in and in the early 1980s the brick wall was built.  At that time there was a wire fence that ran from the end of the brick wall to the wall by the basement steps.  To the east of this fence and behind the garage was a large vegetable garden.  In 1996 the patio and pergola were added.