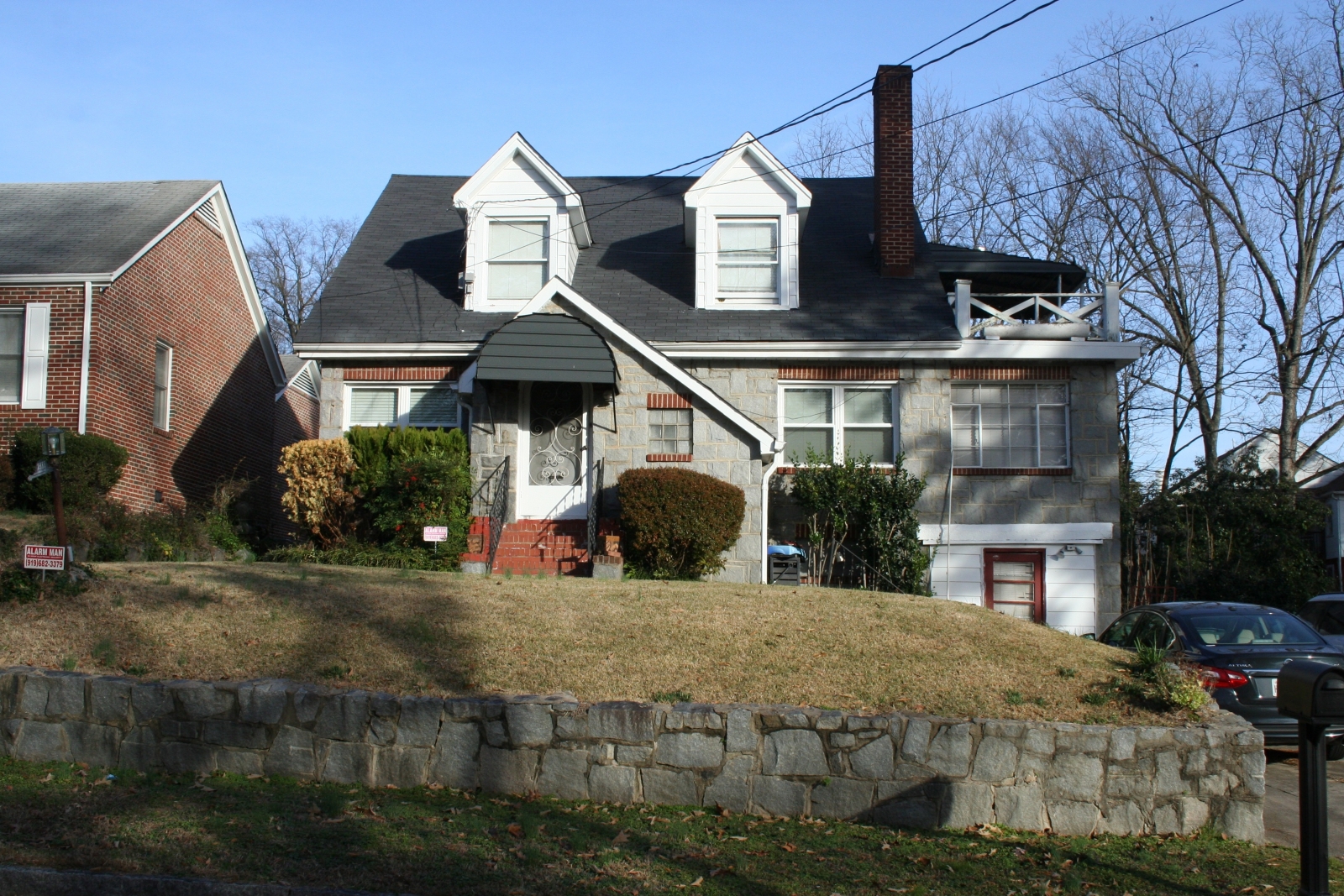 One of a small number of stone houses in the district, this one-and-a-half-story, side-gabled Period Cottage has a flat-roofed wing on the right (south) elevation, flush with the façade, and an asymmetrical, front-gabled entrance wing centered on the façade. The house is four bays wide with a granite foundation and first floor and vinyl siding in the gables. Most of the windows are replacement vinyl windows, though an original sixteen-light metal-framed window remains on the façade of the flat-roofed wing. All of the windows have soldier-course brick lintels and rowlock brick sills. The entrance wing is two bays wide with an arched batten door with three lights on the left, sheltered by an arched aluminum awning, and a glass block window on the right. There are two gabled dormers on the façade, each with vinyl siding and a single vinyl window, and an interior brick chimney. There are two windows in the left (north) gable and an inset bay at the left rear (northeast) has been enclosed with vinyl siding. A single entrance in the right gable is sheltered by a shed roofed awning on square posts and opens to the roof of the flat- roofed wing on the right elevation, which has a wood railing at the roofline. The flat-roofed wing has a basement level garage opening on the façade with a wide wood header that has been enclosed with a pedestrian entrance and vinyl siding. The wing has two pairs of vinyl windows on the main level of the right elevation with a single vinyl window at the basement level. A wide, shed-roofed dormer with vinyl siding extends across the rear (east) of the house. A stone wall extends along the front of the property and along the north side of the driveway. County tax records date the house to 1948 and the earliest known occupants are Leroy B. Frasier, Vice President - Agency Director at NC Mutual Life Insurance Company, and his wife, Catherine Frasier, in 1950.  This house sits on a large lot and to beautify the area next to the house, the Frasiers built a large pond, surrounded with stone, and filled it with goldfish.  The children of the neighborhood were fascinated by watching the goldfish and observing their growth.  Along with the pond, there were benches, giving the area a park-like setting.

They were the parents of two sons.  Mrs. Frasier was a cousin of Charlotte K. Sloan, who lived at 2100 Otis Street.  After Mrs. Frasier's death in late 1959, Mr. Frasier married Mary Elizabeth Jones Frasier, a principal at Frank Porter Graham Elementary School in Chapel Hill, in 1961.  According to county deed records, Mr. Frasier transferred the title of this property to Mrs. Frasier and her son, William A. Jones, Jr. in 1989.  The house remained in the Frasier family until it was sold in 2002.  On August 13, 2002, Kipchoge Ryan, became the owner and occupant of the home and still lives there.  Mr. Ryan is an alumnus of North Carolina Central University and an entrepeneur.  He owns several residential properties in the city, and one commercial property, the former Weaver's Cleaners building, on Fayetteville Street.

Mr. Frasier's sons, Ralph and Leroy, were two of the first three Black students admitted into the undergraduate program at the University of North Carolina at Chapel Hill.They won the right to attend the school after the case was heard in the United States Supreme Court.  Their case was argued by three College Heights attorneys, John Wheeler, who lived at 302 Formosa Avenue, M. Hugh Thompson, who lived at 304 Pekoe Avenue, and Floyd McKissick, who lived at 2110 Fayetteville Street.