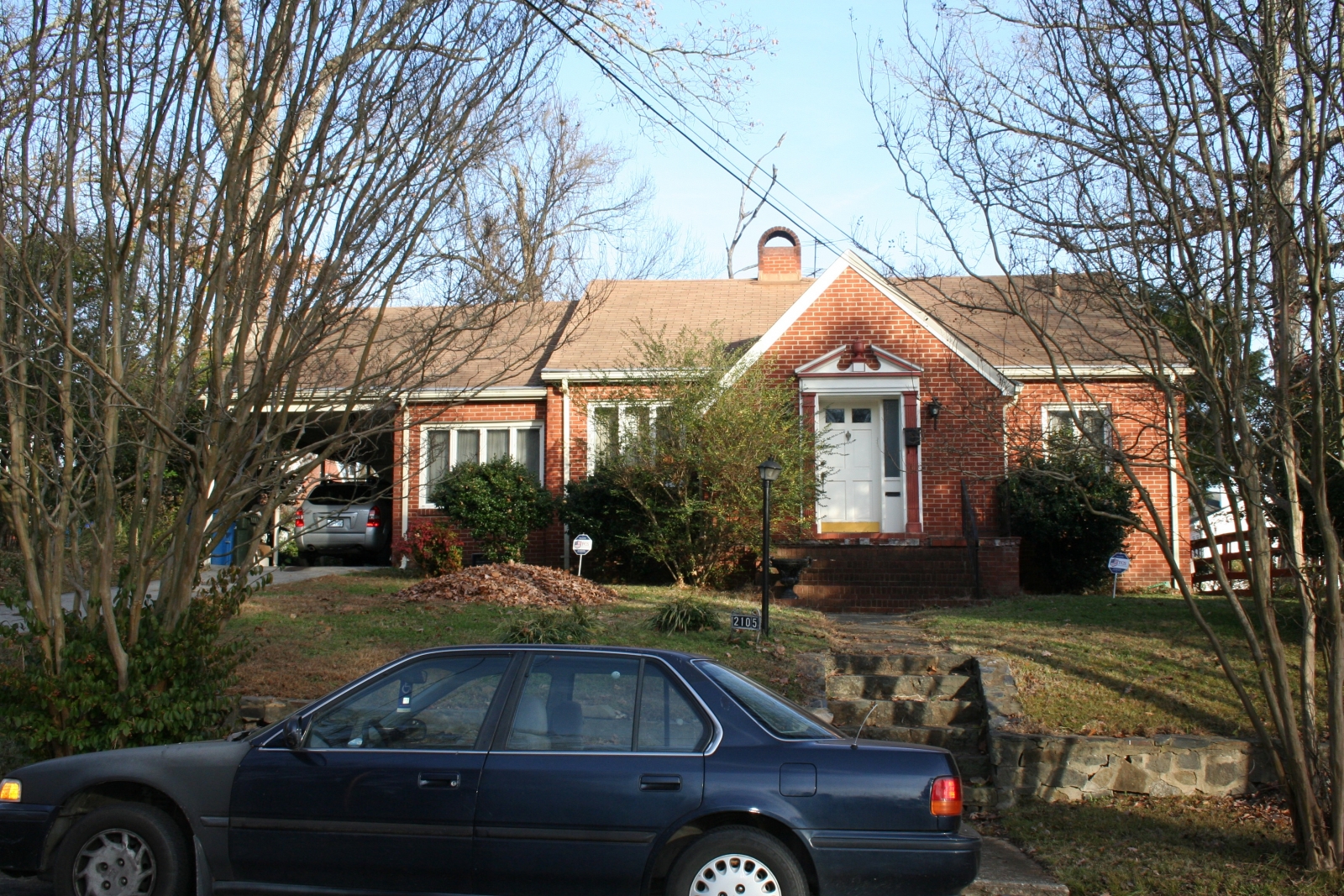 This one-story, side-gabled, Period Cottage is three bays wide with a projecting, asymmetrical, front-gabled entrance wing centered on the façade, a side-gabled brick wing on the left (north) elevation, and a gabled ell at the right rear (southeast). The house has a brick veneer, replacement grouped casement windows in the original brick openings, and an interior brick chimney. The two-light-over-four-panel door is located in an inset bay, centered in the entrance wing, has a classical surround with broken pediment and fluted pilasters, and is accessed by an uncovered brick terrace. A side-gabled wing on the left elevation has grouped casement windows on the façade and sliding one-light doors on its left elevation. An engaged carport on the left end of the wing is supported by metal posts. A stone wall with stone steps extends across the front of the property. The earliest known occupant is Maude O. Wigfall, a cashier at NC Mutual Life Insurance Company, in 1945. By the mid-1950s, the house was owned and occupied by Dr. Ezra Totten, Professor of Chemistry at North Carolina College (now North Carolina Central University), and his wife, Christine Totten, a high school teacher.

According to deed records, R.L. McDougald and wife,Dorothy sold the lot to Ms. Wigfall on November 29, 1940.  In the 1940 City Directory, she is listed as a resident at 1204 Fayetteville Street.  Ms. Wigfall is listed in the 1947 City Directory as owning and occupying this house on Duncan Street.  On March 10, 1951, according to deed records, Dr. Helen G. Edmonds, who lived at 118 Nelson Street, sold the house to Dr. Ezra Totten and his wife, Christine.

Dr. Totten was a chemistry professor and Chair of the Chemistry Department.  The Hubbard-Totten building on the NCCU campus is named in his honor.  In addition to being a school teacher, Mrs.Totten was involved in both social and gardening clubs.  The Tottens would have the children, who lived on the street, to come to their backyard where they would learn and do science projects with him; and gardening with her.  Since they did not have children, they spent a lot of time with the children on the street.  They also organized projects for residents of Duncan Street to participate.  One of their best ideas was to organize Christmas Tree Lane which was done for at least three years.

The Christmas Tree Lane project was featured in the December 29, 1962, Carolina Times (online via DigitalNC).  This is only one example of community spirit and involvement.

"Early in December, the residents of Duncan Street were called together in a meeting at the home of Dr. and Mrs. Ezra L. Totten for the purpose of organizing a neighborhood project during the Christmas Season.  The idea of a uniform outdoor Christmas Tree display, was presented by Mrs. Totten.  This plan was received with a great deal of enthusiasm and the residents agreed to cooperat in the project.  A committee was appointed to select trees of uniform size and arrangement.  On Saturday morning, December 15, 1962 at 11 o'clock, all the residents, including the two families whose corner lots border on Duncan Street, were found setting out and decorating trees.  The selecting and purchasing of trees were made by Totten, and L.B. Frasier supervised the other activities.  That evening at 5:30 o'clock, twelve beautiful trees were profusely lighted on Duncan Street from Pekoe to Nelson.  This was a cooperative program of the Duncan Street neighborhood that was conceived by the energetic, progressive person, Mrs. Christine Totten.  The residents are inviting the entire citizenry of Durham to visit their Christmas Tree Lane.  Plans and the executing of these plans were done in an atmosphere of friendship, love and a neighborly spirit without any thought of competition.  Everyone was interested in the twelve trees along the street."

This was a very proud time for all of the residents involved each year in this project.

After the Tottens died, according to property records, Naomi S. Williams and Lawrence Campbell bought the property in 2002.  They are the current residents.