(Courtesy of Lappegard Photography, March 2019)
Featured in the 2019 Preservation Durham Home Tour (text in italics below from the tour booklet):
For at least nine Durham families, the unassuming home at 1412 Dollar Avenue has been the stage for their realization of the American Dream.  A young florist, a rising bank employee, an entrepreneurial service station worker, a war hero – all among those for whom this property was not simply a place to lay their heads at night, but a key investment in their financial well-being and that of their families.

The land upon which the house now sits was once part of the 80-acre farm of Hampton Dollar, whose father and uncles had fought in the American Revolution.  Dollar’s land passed to his daughter Demerius and then to her nephew C.L. “Monk” Markham.  In 1926 The Dollar and adjacent Markham lands were subdivided into 143 lots and platted as “the Southern Part of the Estate of Miss Demerius Dollar.”  The development included parcels along Watts, Dollar, and Gregson, between Demerius on the south and E. Street or North Road, now Club Boulevard. 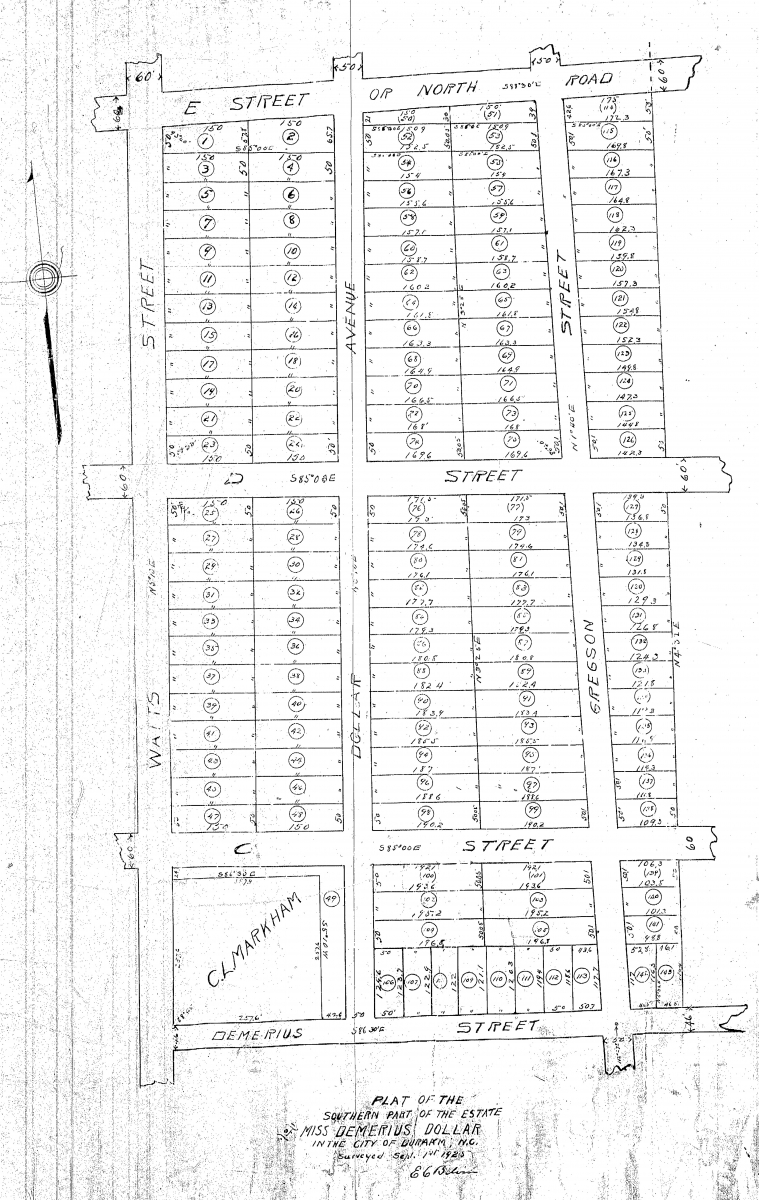 Throughout the 1920s and 1930s, people bought and traded lots in the subdivision and here and there houses were built. This was still pretty far out of town at the time and during the Great Depression, very few houses were built.  Many parcels remained vacant, especially those to the north.  Lot 62, a mid-block parcel on the east side of Dollar Avenue, changed hands several times during this period.  First the lot went to the Security Finance Corporation of Durham, then to local orthodontist and speculative developer Dr. Daniel Carr, and eventually to the Cary Lumber Company which most likely built the home which now occupies the property.

In August of 1938, Claiborne Montgomery purchased the new home.  Montgomery, twenty eight years old at the time, worked at the flower shop owned by his parents on Corcoran Street, now the location of the Jack Tar Motel.  The following month Montgomery married Francis Stephens, a secretary with the City of Durham, and they became the first residents of 1412 Dollar Avenue.

The Montgomerys' home is a Minimal Traditional Style house, undoubtedly built to be eligible for the new Federal Home Administration loan program.  Part of a the New Deal package of programs created by the Franklin Roosevelt administration to get the banking and home-building industries back on their feet, The FHA program was the first to guarantee loan repayment for qualified buyers and qualified houses.  The FHA not only set up the loan program, it literally created the style for the entry-level homes the loan program promoted.   In a series of pamphlets and booklets published in the late 1930s, the agency’s architects and designers described and drew the economical two and three bedroom houses which would satisfy the program’s requirements....

All of the architectural principles espoused by the FHA are evident in the house at 1412 Dollar. It employs an efficient rectangular floorplan with a simple gable roof and two dormers.  This very traditional form was made more interesting by orienting the roofline perpendicular to the street, adding a covered entry with corner columns to the front elevation and a small bump out to the north side.  There is nothing fussy about the design.  The house is well-appointed given its construction during the end of the Great Depression.

The house retains many original features including its large double-hung wood windows, oak flooring, wall paneling, and door and window hardware throughout.  The light fixture in the front hall is original, as is the phone cubby in the back hallway and several of the plumbing fixtures.  A previous owner removed the wall between the living room and dining room, its ghosted outline visible in the neatly patched oak floor.  A 1960s era family room addition to the rear of the house includes a massive brick fireplace.  The attic is an unexpected treat with its unpainted tongue and groove siding, heart pine floors, and a powder room with its original sink.  This space may have been finished when the house was first built, but in all likelihood, it was created early in the history of the house as the family grew. That growth was anticipated by the architect because the fixed stair is part of the original design.

Mr. and Mrs. Montgomery sold the house in 1944 to S.C. Ray and his wife Mozelle Byrd Ray.  The Rays were upgrading from their first home at the South end of Duke Street, near the present site of Compare Foods.  Samuel had worked at his father’s service station near the Venable Tobacco Warehouse on Pettigrew Street, and had purchased the Nu-Tread Tire Company in 1943.  From 1954 to 1957, 1412 Dollar was home to Julian Carr Saunders, Jr., his wife and daughter, both named Annie.  Saunders had attended Durham High School and worked as an actor at the Center Theatre before joining the army in 1942.  He worked as a cashier at the Fidelity Bank, but as his fortunes improved the family moved to a large ranch home in leafy Hope Valley.

Perhaps the most interesting and heartbreaking story of those who called 1412 Dollar home, is that of the Malloys.  James Malloy was born in Missouri.  At the age of eighteen, he enlisted in the U.S. Navy.  He reported for duty aboard the cruiser U.S.S. San Francisco in Pearl Harbor Hawaii on August 7, 1941.  Malloy survived not only the attack on Pearl Harbor four months later, but four long years of war including the battle of Guadalcanal, which saw both the ship’s Captain and Admiral killed in action.

After the war’s end, Malloy met and married Fannie Webb Daniel, who had served as a member of the Cadet Nursing Corps at Park View Hospital in Rocky Mount.  The Malloys moved to Durham, where he first worked as an auto body repair man before taking a new job as Shop Foreman at Miller Truck Sales on Hillsborough Road.  In 1956 James and Fannie were able to purchase their dream home on Dollar Avenue.  Just four years later, James died suddenly of a heart attack at the age of 38 “en route to Watts Hospital.”  Fannie remained in the home until 1977, and passed away in 2014 at the age of ninety-five.

The house at 1412 Dollar Avenue has been the gateway for homeownership for several young Durham families and lately a haven in retirement for others.  That it has remained so little changed for more than eighty years is a testament to the durability and livability of its Minimal Traditional design.