Built by Clyde and Eleanor H. Lloyd  from mail-order plans, the house at 126 Nelson Street is unusual - a late application of the Art Moderne style, a definite deviation from the other brick ranches in the block in a traditionally African-American neighborhood. Sold in 2004 to James and Edwina Hunter. 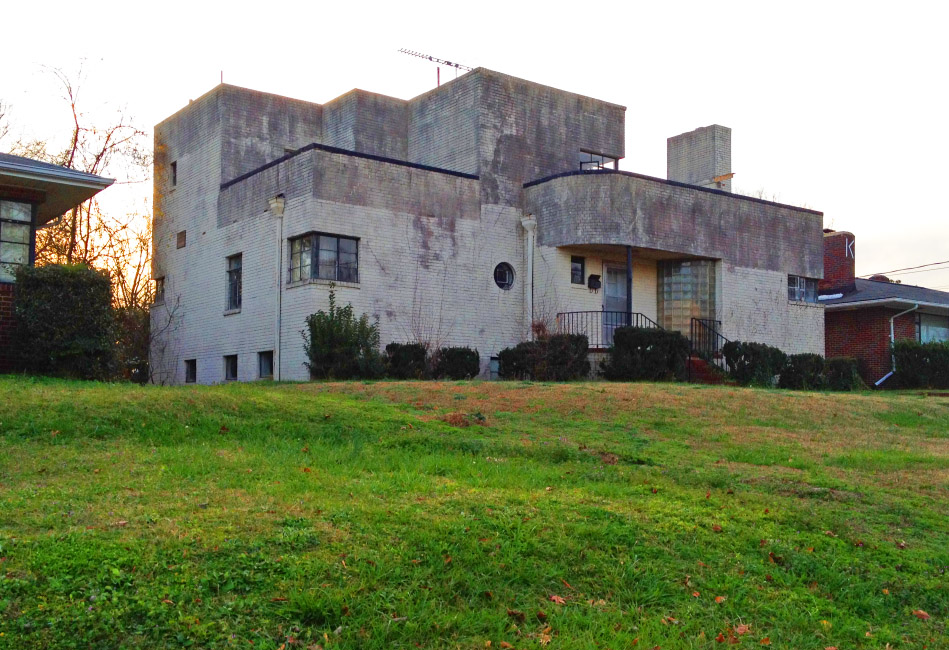 The Art Moderne style lasted from 1922 to 1942—or so the Architecture guidebooks say. So why does one of Durham's finest modernistic style houses date only to 1956?The answer lies in a remarkable story of hard work, patience and good humor. Clyde and Eleanor Lloyd each possess these qualities in abundance. Except for his stint 'in the army during World War II, Clyde Lloyd spent his working life in service as a chauffeur and butler for several of Durham's prominent families.

Mr. Lloyd first saw the plan for his future home in a magazine at a friend's house. The more he studied the house, the more determined he became to make the drawing a real home for his wife and himself He promised Eleanor that if she would be patient, he would build the house himself, from the basement to the roof, in five years. They bought a fine lot on Nelson Street and sent away for the blueprints. The house was to be built of solid masonry. Lloyd studied bricklaying and worked steadily on his time off He was able to do a large part of the work himself with help from his friends and neighbors who assisted him with heavy work and specialty jobs. His employers, Mr. and Mrs. Toms, took an interest in his project and provided nearly 40,000 bricks.

In 1956, four years after Clyde made his promise to Eleanor, the Lloyds moved into their new house-one of the finest and certainly the last Art Moderne house to be built in Durham.

The Lloyd house is a two story, four bedroom house. The exterior incorporates nearly all of the characteristic design elements of its style-asymmetrical facade, flat roof, curved walls, round windows, glass blocks and steel casement windows at the corners. The Art Moderne style is the architectural expression of 'streamlining' that influenced aircraft, ship, train and automobile design during the 1930s. Art Moderne private residences are relatively rare as the style was most frequently used in industrial offices and apartment buildings. Only a handful were built in Durham.

The interior of the Lloyd house is spacious and comfortable. The thickness of its masonry walls is revealed in the opening between the entry hall and living room. Note the large plaster cove moldings. The red carpet in the front hall, a fine wool, was given to the Lloyds by Mr. Branson, one of Mr. Lloyd's employers, when he bought the James Buchanan House and tore out the old carpet while redecorating. The upstairs bedrooms are light and airy. 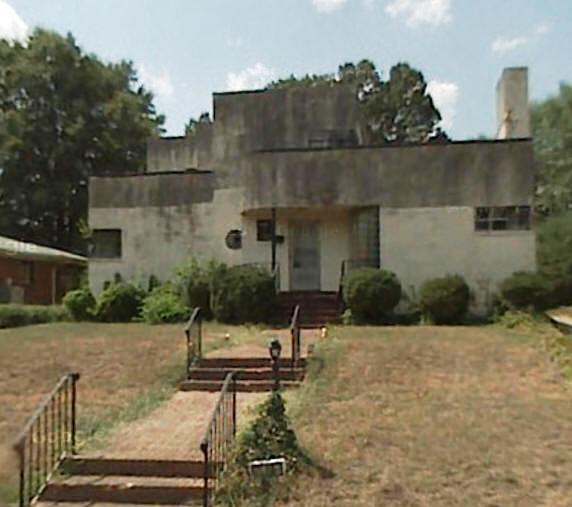 What a cool house.  It's too

What a cool house.  It's too bad that it does not appear to be well-maintained.  But at least the original windows haven't been replaced with vinyl horrors.

Looks like a bunker on Omaha Beach in Normandy.

They never should have put

They never should have put glass block in those bunkers - makes 'em weak on frontal assaults.

The only resemblance to a 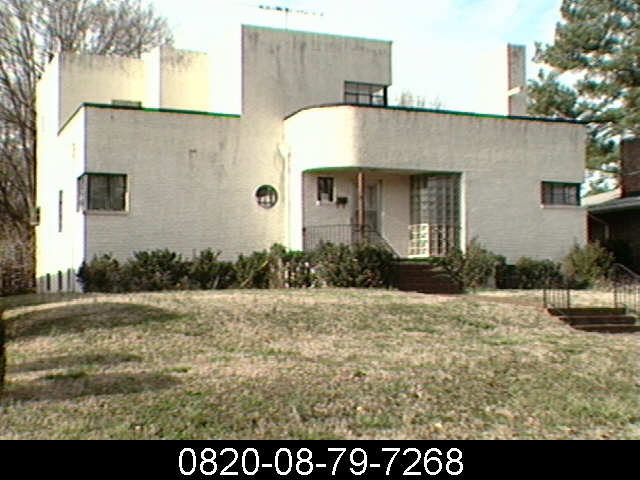 The only resemblance to a bunker is the fact that it's been neglected.  It's owned by absentee landlords in Clarksville, Md.  The tax records show a picture of it with reasonably uniform paint color, and it looks much better.  The ugly storm door needs to go.

I'm sorry you guys don't appreciate modernist architecture.  It's part of Endangered Durham, too.  And in a few years people will be lamenting the fact that we let it get destroyed.

John - I had tongue planted

John - I had tongue planted in cheek. I certainly wouldn't have put it on here if I didn't appreciate it.

This house was featured in

This house was featured in the Preservation Durham house tour a decade or so ago.  The Lloyds were quite old at the time.  Mr. Lloyd had been the chauffeur for the Branson family for years and he was very skilled.  He told his wife that he would build her any house she wanted, and she selected this Internationalist plan.  Jane Goodrich and John Compton and I went over and prepared the house for the tour, and I remember that Ellen Reckhow worked with us as a docent.  The Lloyds were very proud of their house.  They were delightful hosts and I enjoyed talking with them for hours.  This is a house that needs to be restored and preserved for so many reasons.  It has a real story to tell.

What a great home. Hope

What a great home. Hope someone makes the owners an offer they can't refuse. I grew up in Durham and really appreciate all the work you do on this site.

FYI, this house is up for tax auction on Feb. 12, next week. Starting bid $7,636. Someone finally has the chance to save this guy from absentee landlord hell!

went to buy and the house was redeemed by owner

went to buy and the house was redeemed by owner

As a college student at NCCU,

As a college student at NCCU, 126 Nelson St was my home away from home. Mr. & Mrs. Lloyd housed college students in the mid seventies. It is such a shame to see such a beautiful structure left unkept. I wish the owners would consider selling to someone who would restore it to its former state of elegance.
t