This one-story, L-shaped Contemporary style house has a low-sloped gabled roof covered with tar and gravel, large purlins in the gables, and stacked metal awning windows. A side-gabled section on the right (southeast) is three bays wide and double-pile with brick on the lower half of the façade and vertical plywood above. An inset entrance on the left (northwest) end of this section has a solid wood door with wide one-light sidelights in an inset brick bay. To the right of the entrance are paired and single windows. The right elevation of this section is fully sheathed with vertical plywood and from it a side-gabled carport projects. The carport has the same low-sloped roof with purlins and vertical plywood in the gable and its right side is screened by a vertical louvered wall. A front-gabled section on the left end of the house projects beyond the side-gabled section. It is two bays wide and triple-pile with vertical wood sheathing, an interior brick chimney, and stacked awning windows that extend all the way to the front corners. The site slopes to the left, down to Roxboro Road, revealing a basement level below the front-gabled section, though the main level overhangs the brick basement level slightly with projecting purlins supporting the overhang. County tax records date the house to 1958 and the earliest known occupants are Joseph W. Goodloe, vice-president of NC Mutual Life Insurance Company and director of Mutual Savings and Loan Company, and his wife, Betty Goodloe, an executive secretary at North Carolina College (later North Carolina Central University), in 1960.

In fact, Goodloe would go on to be named President of NC Mutual after his predecessor, Asa T. Spaulding, retired in early 1968.  A June 1966 feature article in Ebony magazine about the ceremonies surrounding the opening of the company's striking new office tower on Chapel Hill Street included a picture of the Goodloes approaching what seem to be the back steps of their home on Masondale Avenue. 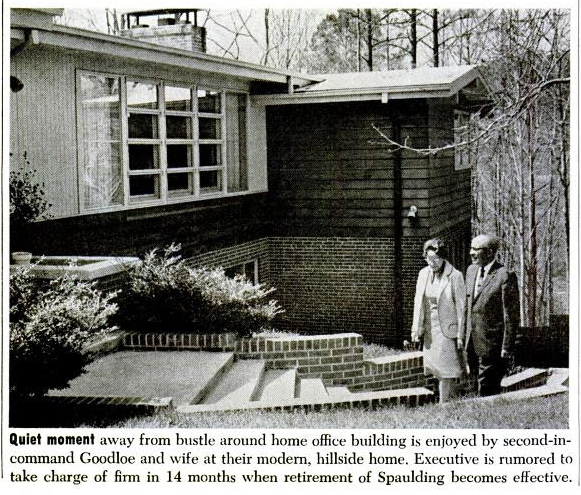 (photo from p.158, see the entire issue of Ebony on Google Books)

Already in his early 60s by the time he assumed the head role at the company, Goodloe retired in 1972.  The Goodloes appear to have sold the home on Masondale in 1978.